How Natural News Compared Us to Pro-GMO Nazis and Put Us on a Hit List - Modern Farmer
Food & Drink, Lifestyle

Adams runs NaturalNews, the innocuously named, mystifyingly popular site that for years has existed to attract the gullible and amuse the rational. Over the past few days, though, things have taken an ugly turn, with people’s lives being threatened based on Adams’ belief that they are working in league with Monsanto to foist genetically modified […] 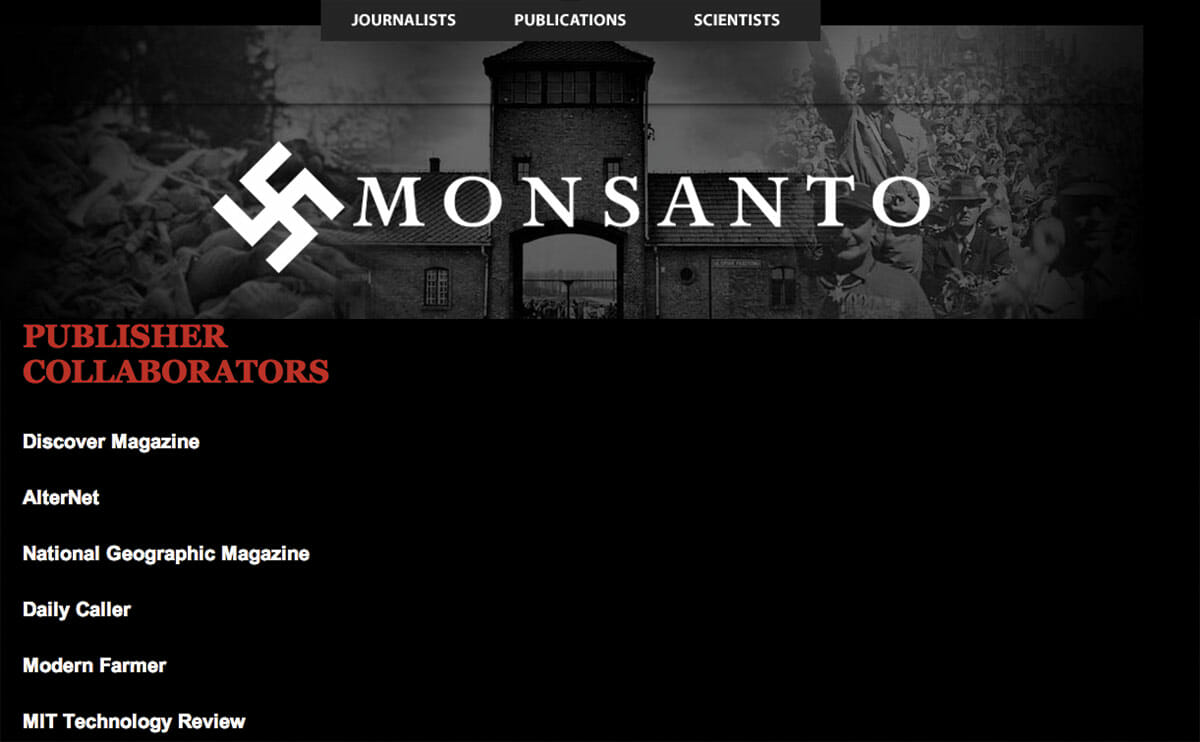 Adams runs NaturalNews, the innocuously named, mystifyingly popular site that for years has existed to attract the gullible and amuse the rational. Over the past few days, though, things have taken an ugly turn, with people’s lives being threatened based on Adams’ belief that they are working in league with Monsanto to foist genetically modified foods into the marketplace.

On July 21, Adams posted a long, insensible screed in which he compared several journalists and the publications they write for to Nazi collaborators.

On July 21, Adams posted a long, insensible screed in which he compared several journalists and the publications they write for to Nazi collaborators. In one passage, he quoted a recent statement from a government ceremony led by German President Joachim Gauck, who applauded the efforts of Nazi military officers who had tried (and, obviously, failed) to assassinate Adolph Hitler. Adams wrote that the “official message from the nation of Germany to the rest of the world is that ‘it is the moral right — and even the obligation — of human beings everywhere to actively plan and carry out the killing of those engaged in heinous crimes against humanity.'”

Except that wasn’t a quote, despite the quote marks. Later, Adams appended this to the end of that sentence: “(UPDATE: Those are the paraphrased words of the German government, not my statement.)” Paraphrased, and yet the quote marks remain. A review of news articles about the ceremony and what was said there yielded no quotes that resembled Adams’ “paraphrase.”

This is a particularly clumsy bit of dissembling. Whether the quote is an accurate paraphrase or not, Adams is clearly saying that supposed Monsanto “collaborators” and Nazi collaborators are morally equivalent, and equally deserving of assassination.

Whether the quote is an accurate paraphrase or not, Adams is clearly saying that supposed Monsanto ‘collaborators’ and Nazi collaborators are morally equivalent, and equally deserving of assassination.

Adams didn’t name any names in his diatribe, but another Web site that was discovered last week surely did. Monsantocollaborators.org (now offline, but archived here) bears a Swastika and provides what amounts to a hit list. Among the publications listed are Modern Farmer, Forbes, National Geographic, the Daily Caller, MIT Technology Review, and Discover. Among the humans listed is science writer Brooke Borel, who wrote one item about GMOs for Modern Farmer, but has written much more extensively (and, it should be noted, equally thoughtfully) on the subject for Popular Science, which, weirdly, was not listed. Others named include David Gorski, a surgeon who has often criticized Adams and Natural News; mustachioed TV libertarian John Stossel, whose catch phrase is “Gimme a break!”; science writer Jennifer Ackerman; and Don Hazen, the founder of the left-leaning alternative news site AlterNet, which was also listed.

Here’s where things get a little more interesting, if also a bit cloudier. Adams on Friday linked to Monstantocollaborators.org and declared that after “analyzing” the site, he concluded that there was “a very high likelihood [that it] has been launched by the biotech industry to serve as a trap for GMO skeptics.” It was obviously, he said, a “false flag” operation. He even concocted a whole theory about how “biotech shills” and “operatives” had conspired to create elaborate plans to discredit “anti-GMO” activists like himself. He also speculated that the people and publications on the hit list might not even know what was happening, but were merely being used as dupes by evil GMO forces (which raises the question of who he thinks the real “collaborators” are, if not the people on the hit list).

Later, though, evidence began to mount that it was Adams himself, or someone working for him, who created Monsantocollaborators.org. It’s impossible at this point to say for sure, but this post by This Week in Pseudoscience lays out a compelling case.

And now, the cops are involved. Borel alerted the FBI. Jason Pontin, editor of MIT Technology Review, reported the threats to the MIT police, who he said made a formal report. Jon Entine, a hit-list target who edits the Genetic Literacy Project site, claimed on Monday that the FBI had “immediately launched an investigation of Adams and the site, with Adams facing possible felony charges of inciting violence.” Entine didn’t cite a source for that information, but told me via email that he learned of it “off the record through my connections with the FBI.” An FBI spokesperson said the bureau had no comment, which it almost never does in such cases.

If not for the threats, all of this would be supremely silly, of course, and Adams is a silly man. But at the same time, he represents — and in fact, is a leader of — a movement that doesn’t merely ignore science, but actively fights against it, even while strongly claiming that science is actually on its side, whatever actual mainstream scientists might say (if asked, they generally say that Natural News is the worst kind of quackery).

In an update to his initial post, Adams betrays a fundamental — and, it would appear, purposeful — misunderstanding of what science is. “Both GMOs and Nazi philosophy are heavily promoted under the banner of ‘science’ along with a militant insistence that ‘science’ can never be questioned.” Readers can judge him for his use of scare quotes there as they wish. But unlike the pseudoscientists who supported the Nazi regime, none of the people on the hit list believes that “science can never be questioned.” I don’t have to ask any of them to know that they all believe that questioning science IS science. Every scientific conclusion is open to reassessment, modification,or even dismissal in the event that new data calls for such action. That’s how science works.

Natural News gets about 7 million unique visitors every month, according to Alexa. The site’s Facebook page has 1.2 million likes. (It’s hard to know how much of its audience comprises hate readers or people just looking for a good laugh.)

The popularity of Natural News mirrors a growing trend in American Electoral politics. The kinds of things that once considered niche-right-wing media are now part of the public conversation, enabled in part by the Internet. And people outside of such circles are being pulled into the fray, sometimes with disturbing results.

“It was unsettling to see my name on the list, and also surprising,” listed journliast Borel said. “I think biotechnology opens a lot of cool possibilities for farming, but I don’t consider myself an ardent pro-GMOer.” And yet Borel’s name landed on a hit list that was widely distributed across the web to ardent anti GMO “activists.”