He Once Grew the Biggest Pumpkin Ever in Virginia. Now He's Going to Change the World - Modern Farmer
Animals, Plants

He Once Grew the Biggest Pumpkin Ever in Virginia. Now He’s Going to Change the World

Lucky was big, but she had nothing on Last Chance, the 1,138-pound Leviathan that Layton grew in 2007 and which still stands as the state record for the largest pumpkin, well past the bell curve. Though a disappointment in the absolute size sense, Lucky demonstrated proof-of-concept of a new growing method that, Layton says, is […] 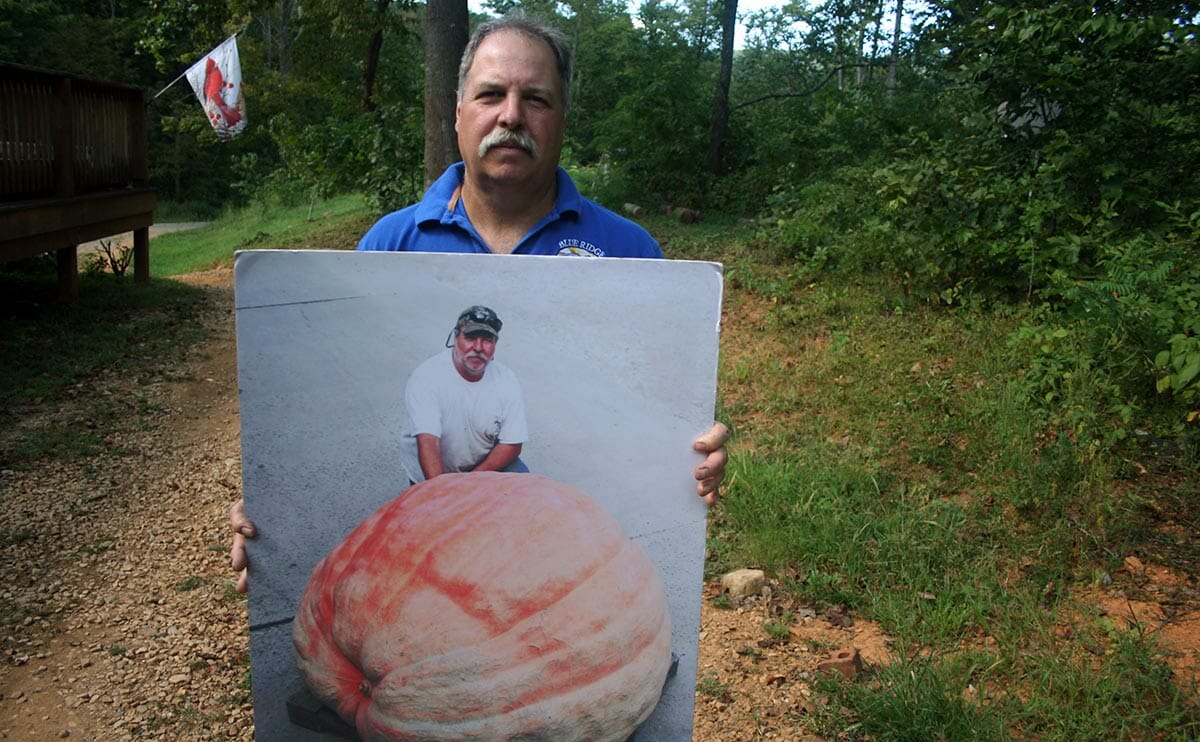 Lucky was big, but she had nothing on Last Chance, the 1,138-pound Leviathan that Layton grew in 2007 and which still stands as the state record for the largest pumpkin, well past the bell curve.

Though a disappointment in the absolute size sense, Lucky demonstrated proof-of-concept of a new growing method that, Layton says, is going to change the world. It’s an immense ambition, which makes it particularly fitting that it’s one rooted in the sport of giant pumpkin growing, a pursuit that has everything to do with ambition and immensity.

To fully understand all this, we have to start in 2005, when Layton first planted a giant pumpkin seed in a small garden plot beside his house in Nelson County, Virginia, right at the ragged, rugged edge of the Blue Ridge Mountains. According to the maps, the place is called Tyro, but according to Layton, it’s simply God’s Country.

Layton’s initial effort yielded a 225-pounder ”“ impressive to the layman, maybe, but peanuts to the hardcore. The next year, he got up over 500 pounds, putting him into potential ribbon territory at the State Fair of Virginia.

At this point in Layton’s life, pumpkin growing was simply a hobby, and his time in the garden was shoe-horned around long hours spent running his 60-employee construction company that was riding the housing boom.

But the 500-pound pumpkin got him excited, and Layton began immersing himself, through long hours of online research, into the finer points of growing massive pumpkins. He became convinced that compost was the key to upping his game. William Layton is not a man to just dip his toes in the water. So William Layton hauled a dump-truck load of compost up to God’s Country. 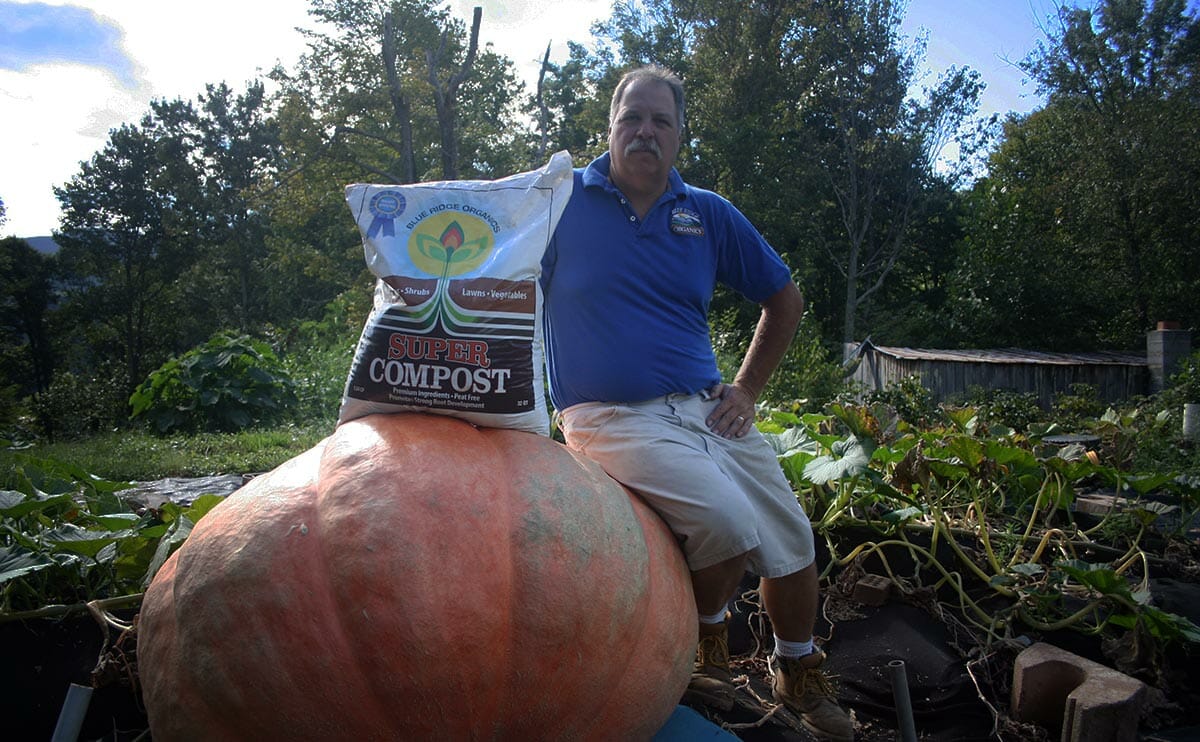 Layton and Lucky and a bag of Layton's Super Compost, developed during his quest to grow an even more giant pumpkin, and now the foundation of a new business venture.

The compost move paid off. In 2007, he grew Last Chance, the first Virginia pumpkin ever to top (smash through, really) the 1,000-pound barrier. The accomplishment “was huge,” and it was promptly followed by a series of trials and tribulations.

In the garden, disease and weather problems put a hurt on a few successive years’ crops. On the career front, Layton’s construction business burst with the housing bubble, wiping his company out to just about nothing.

In 2011, Layton had a pumpkin named Monster growing that was shaping up to be a 1,500-pounder, a true world-class specimen. And then, before heading north to ravage New England, Hurricane Irene dumped a deluge on God’s Country. Despite the tarps and other protective measures Layton employed, things got too wet. Monster’s whole backside rotted out, and that was that. A summer’s toil had culminated in hundreds and hundreds of pounds of rotting pumpkin flesh.

“I lost the Monster,” said Layton, who keeps in his living room an oversized photograph of him posing beside the behemoth pumpkin that almost was. “I was down. I was mad.”

Hard times and bad luck in the pumpkin patch are attributable, at least in part, to the climate in God’s Country.

“They’re fighting Mother Nature because it gets so hot down there,” said Steve Connolly, a director with the Southern New England Giant Pumpkin Growers. “[Pumpkins] don’t like to grow when it gets super hot.”

Conditions are better in New England, where a Rhode Island grower named Ron Wallace grew the world’s first one-ton pumpkin ”“ 2,009 pounds ”“ in 2012. This year in Switzerland’s mild climate, a man named Beni Meyer grew a pumpkin that topped a remarkable 2,300 pounds, although it had a small crack that disqualified it from official world record status. (Given that the world’s first 1,000-pound pumpkin wasn’t grown until 1996, we are in an incredibly exciting era of improvement for the sport, fueled by genetic advances and increasing sophistication in growing techniques.)

Layton can’t do much about the climate in God’s Country, and he couldn’t do much about yet another disaster that struck in 2012: a late June derecho storm. His pumpkin vines were ripped from the ground and scattered about like tumbleweeds; he later found his young pumpkins speckled with sticks and stones embedded in their flesh.

It was his fifth consecutive year of failure, and Layton decided to change things up. He’d been growing his pumpkin plants ”“ as people generally do ”“ in the ground. “To do something over and over again and get the same result is insanity,” remarks Layton, who didn’t go to college but is a proud graduate of the school of hard knocks.

Layton returned to compost, the secret ingredient that made Last Chance the singular giant pumpkin achievement in the Commonwealth. He’d continued experimenting and working with compost during the years of failure and catastrophe, and after the derecho took out the 2012 crop, he launched a new company called Blue Ridge Organics to market his proprietary “Super Compost.” (Layton is also still soldiering on in the construction industry ”“ just him and another guy, if and when he can find work).

The Super Compost is made from wood waste products in piles that heat up to 160 degrees For eight weeks and then age for two years, and Layton began stuffing it into four-foot long fabric tubes that he placed on a tarp spread over what used to be the pumpkin patch. He planted his starts directly in one of the tubes, and as the vines grew ”“ at a rate of close to two feet per day at the height of the summer ”“ he trained them along other compost tubes, all of them just sitting on the tarp.

And thus did Lucky grow, on a plant that never touched the same God’s Country soil that gave us Last Chance and, almost, Monster. She wasn’t nearly as big as Layton had hoped, but she was still big, and she gives him proof-of-concept.

“Stuff like this happens,” said Layton, on the fact that Lucky didn’t get truly huge. “It just happens, and it ain’t nothing you did wrong. It’s just the pumpkin.”

Layton hardly did any weeding, and none of the grueling digging, fertilizing and soil amending that used to keep him out in the pumpkin patch from sunup until it was time to go to work, and from quitting time through dark, six or seven hours a day. While the rest of the giant pumpkin world was out toiling in the fields, he was fishing.

“This is the only way to go,” he said. “I’m gonna sell my tiller. I’ve worked too daggone hard in my life to be out sweating in my garden.”

Now, armed with a compost recipe he believes in and a fabric tube system that grew Virginia’s second biggest pumpkin this year, Layton is charging full steam ahead to change the world. The compost is available now in 40-pound bags in at least 11 states, as are smaller, two-foot fabric tubes marketed as Garden Soxx. 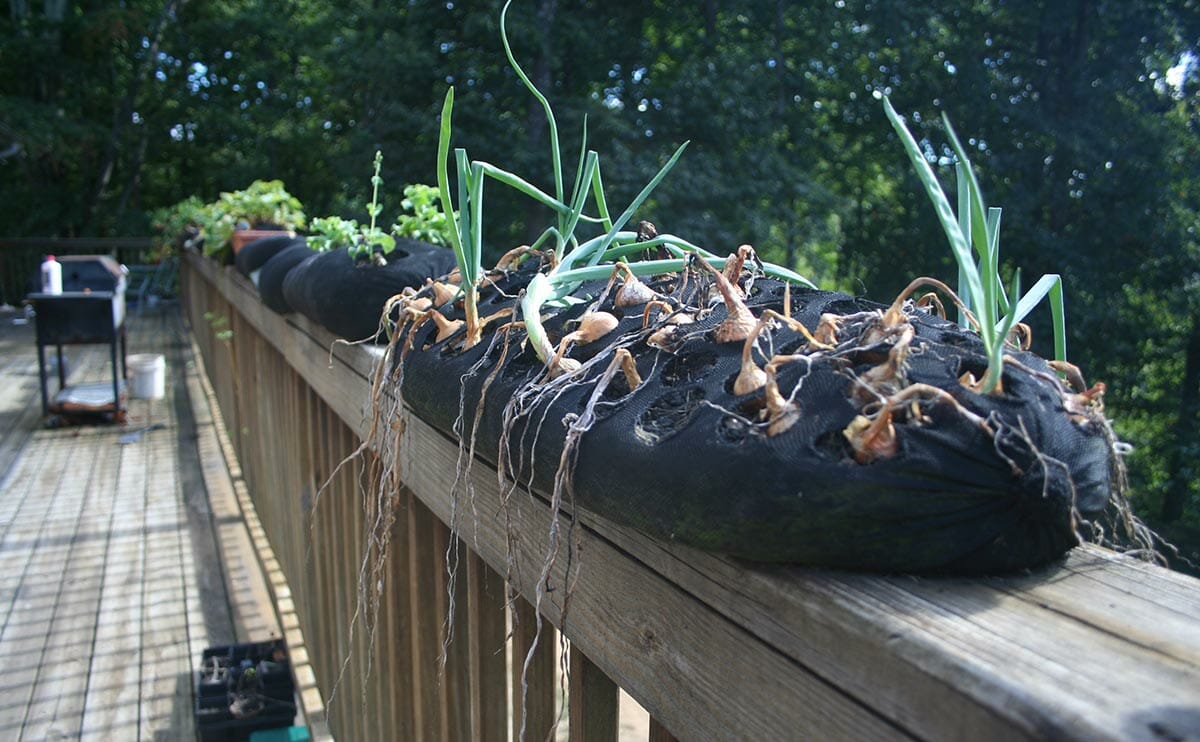 Layton grew his regular garden on the rail of his back porch, in Garden Soxx filled with his Super Compost. This, he says, has world-changing potential.

“I can put this system anywhere,” he said. With a few compost-filled Garden Soxx, Layton dreams of a world where organic gardens will bloom on urban rooftops and in barren deserts ”“ as Layton’s conventional garden plans (tomatoes, peppers, onions, potatoes, strawberries, greens, etc.) grew this year in a collection of Garden Soxx on his back porch.

There are marketing plans to develop, distribution deals to sign, garden shows to reach the masses (he takes along the picture of him and Monster to illustrate the potential of Super Compost). There’s a whole world to change, and he says this without any hint of irony or hyperbole.

Layton’s business “is growing by leaps and bounds right now,” much like the pumpkin vines that he sends shooting out across God’s Country every summer. He’s known pumpkin success, and he’s known plenty of pumpkin failure, and, in true giant pumpkin-grower fashion, he’s looking ahead, not behind. Latyon is dreaming of big things.