The future isn't here in the sense of you getting your own flying car, but at least easy to use pesticide detectors are on the way.

Agriculture production in the U.S. uses nearly 700 million pounds of pesticides every year, according to Consumer Reports, and nearly three-fourths of the 6,953 produce samples tested by the U.S. Department of Agriculture in 2014 contained pesticide residues, according to the Environmental Working Group, a nonprofit that works to protect human health and the environment.

In the face of these stats, researchers in Spain and Belgium, scientists in China, and a young inventor in France are looking into new ways to detect pesticides on produce.

The problem? The best way to identify pesticide residue on fruits and vegetables is through either gas or liquid chromatography-mass spectrometry, a process that requires expensive (as in tens of thousands of dollars) and bulky equipment. The trick is coming up with a cheaper method and a smaller device that could be used for field testing, or even by consumers while they are at the store or at home.

Here are four ways scientists are trying to make it happen.

A group of Spanish scientists from the University of Jaén have come up with a solution to tackle the issue of a more affordable way (less than $2,000 according to a quick product search of the equipment needed) to detect the presence of clothianidin, a type of neonicotinoid insecticide in produce. A sample of the produce is injected into teflon tubing that’s loosely coiled around a 15 watt low-pressure mercury lamp. A photochemical reaction ensues, allowing for the detection of the pesticide at very small levels with the help of a computer program. Here’s a bit more detail on exactly how it all works.

Julia Jiménez-LÁ³pez, one of the researchers on the project, tells Modern Farmer in an email that they could have patented the process, but instead the researchers decided to publish details of the method for other scientists to use if they so choose. Her team is continuing to improve the system and have plans to market the technology “in the near future.”

“The intention of our research group is to continue to improve our systems for the analysis of pesticides so not only can they be used in routine laboratories, or for quality control, but also by the general public, through portable devices that perform the same analysis focused on where the pesticide appears on produce,” says Jiménez-LÁ³pez.

“A breathalyzer for fruits and vegetables” 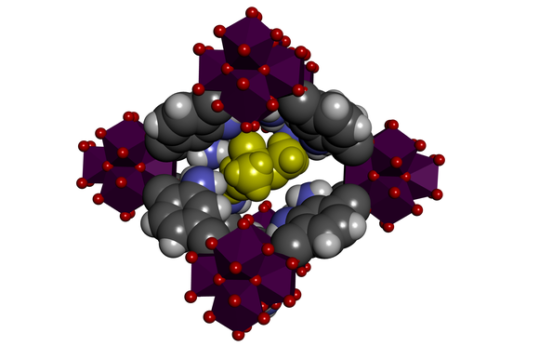 An illustration of the MOF created by the international team, and made up of organic molecules and metal ions. Image: KU Leuven – Centre for Surface Chemistry & Catalysis

An international research team led by Belgian scientists from the University of Leuven in conjunction with IMEC, a Belgian nanotechnology research center, have created an “electronic nose” to sniff out pesticides. The process uses metal-organic frameworks (MOFs), manmade microscopic sponges that can absorb the phosphonates found in pesticides.

Think of it as a breathalyzer for fruits and vegetables, but instead of measuring how much alcohol a driver has consumed it measures whether phosphanates (glyphosate, the herbicide “Roundup” is an example of one) are present on a fruit or vegetable, even at minuscule levels. Postdoctoral researcher Ivo Stassen, who is heading up the team behind the project with Rob Ameloot, said in a university press release that the concentrations they are dealing with are extremely low, equivalent to “a drop of water in an Olympic swimming pool.”

This technology can also detect nerve gas at very low levels. Stassen and Ameloot believe the technology will have a host of other uses as well, from the early detection of lung cancer by screening a person’s breath to distinguishing imitation wine from the real thing. Work is continuing on the project.

Scan Eat: Scan, and eat (or not, if there’s too much pesticide present)

Simon Bernard, a 25-year-old French college student in his final year at the National Maritime College of France in Normandy, has come up with a pesticide detector he calls “Scan Eat.” The small device that’s the size of a flash drive is hooked up to a smartphone app that would allow the user to scan a piece of fruit or a vegetable while shopping to determine the pesticide levels that are present on its surface, according to the French news website Sciences et Avenir.

The device is based on a miniaturized infrared spectrometer created in 2014 by Consumer Physics, an Israeli start-up whose product Scio allows users to gather information on the molecular makeup of objects (like plants and food) by scanning them with a device that emits a near infrared light at a specific wavelength and reflects the molecular signature of the food.

Bernard is working on converting the technology to recognize pesticides and determine how much of the chemical is present on the fruit or vegetable. His idea earned him a 150,000 euro award from France’s Ministry of the Environment and nine months at a government-sponsored green tech incubator where he’s working on the algorithms needed to convert the data into understandable pesticide levels that consumers can read on their smartphones.

MacGyver would be proud

A prototype of the smartphone-based system. Photo: Qingsong Mei et al./Biosensors and Bioelectronics.

Researchers from Hefei University of Technology in China and the National University of Singapore, devised a detector for the pesticide thiram that uses paper and a smartphone, according to Phys.Org. The scientists created nanoparticles that emit a fluorescent signal on the paper, and a piece of equipment that scans the paper with a small laser. A smartphone app the researchers designed then reads the differences in the fluorescent light and converts the information into understandable levels of the pesticide’s presence.

“We’re now making the system useful for real world application,” Prof. Yong Zhang, a lead author of the study from the National University of Singapore, tells Elsevier.com.”We’re planning to use the technology to detect multiple molecules at the same time ”“ something called multiplex detection. In this way we could, for example, test the quality of the food we eat every day.”

Barring waiting for these types of devices to become widely available and cost effective, consumers who are worried about ingesting synthetic pesticide residue can buy organic or rely on the EWG’s “Clean 15” list of conventionally-grown fruits and vegetables that tend to have less pesticides used in their production, and to avoid others that rely on high-pesticide use in their growing.

I am distributer and would like to fullfill our portfolio for our market.