California entrepreneurs try to design their way out of the drought. 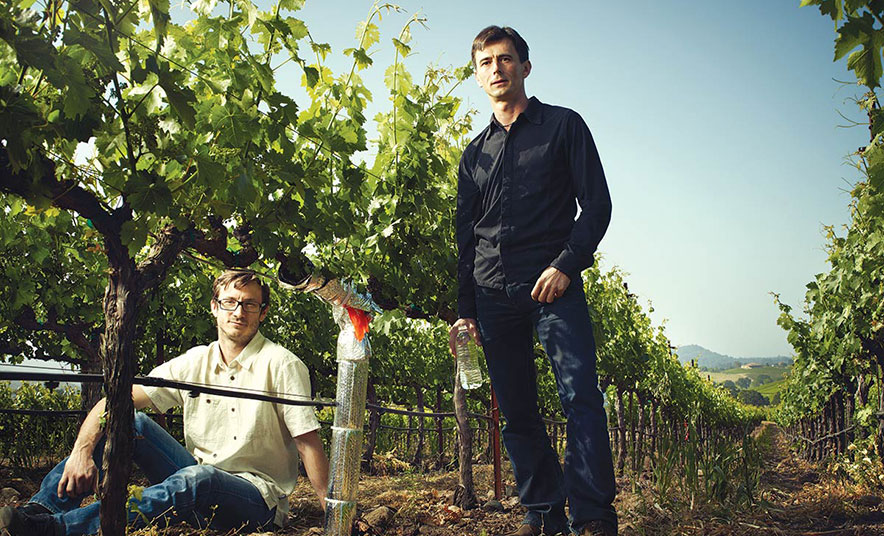 On an unseasonably balmy March evening, a common scene is playing out in San Francisco’s Financial District. Inside a venue with enormous windows and a gilded staircase, guests glide through the crowd underneath glittering chandeliers. There’s a photo booth; wine is flowing. A DJ who is also a trumpeter riffs along to his set. The women are in heels and dresses; the men sport blazers and hip glasses. “So, I should invest in this company in San Rafael?” a man asks by the wine station, as his friend starts handing over contact information. “Ugh, that’s what I hate about these mingles,” frets one woman, adjusting her hair in the ladies’ room mirror. “I don’t know how to strategize about who to talk to!” 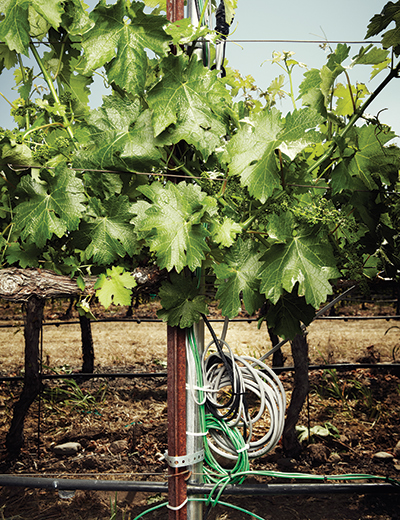 A vine with cables is used to record data in real time.

But this soirée isn’t being thrown to fete the latest sexting app or online delivery service cooked up in San Francisco’s towering tech scene. Everyone is here to talk about water.

This is the fifth annual Water Gala thrown by the San Francisco nonprofit Imagine H2O, an organization that connects water technology entrepreneurs with mentors and investors. Every year, the group holds a business plan competition around a specific topic, with winners receiving a cash prize and strategic support. This year marks their first-ever agriculture-themed competition. And it couldn’t have come too soon, as California suffers through a historic drought. Estimates state that farmers will let 800,000 acres of land lie fallow in 2014 due to water shortage. Overall, the drought could mean a loss of some $11 billion in annual state revenue.

“How can you effect real change and innovation,” he asks, “when we’re not deploying the same resources that we do toward other problems of this magnitude?”

Water is tied up in municipalities and often thought of by consumers as something they shouldn’t have to pay much’ for. It’s a conservative sector to which investors have not historically flocked: Although there are a number of venture capital firms devoted to clean technology and agriculture, XPV Capital in Canada is one of the only firms devoted solely to water. But the tide seems to be slowly turning. A burgeoning water tech scene is building in California and insiders feel emboldened – but cautious. Farmers are a notoriously skeptical bunch when it comes to new technology, especially when it comes to the question of who’s going to pay for innovations as they arrive.

Getting farmers on board with using water sensors in their vineyards was not easy, says Thibaut Scholasch, one of the founders of Fruition Sciences, a company that won Imagine H2O’s inaugural competition five years ago. Water sensors like Scholasch’s that collect crop data and help growers make decisions about water usage are part of a trend growing in numbers and popularity.

The Difference a Year Makes

“Typically, farmers trust their eyes,” says Scholasch. “But that implies that plants are designed to send you visual cues of what they need, which they’re not. Plants haven’t waited until we’ve been on Earth to cope with water scarcity.”

Farmers have been training their plants to be addicted to water, Scholasch says. Not only can some get by with less, many can thrive – particularly the grapes key to California’s famous wine industry. His company’s product is a bracelet worn by vines that transmits data in real time. An algorithm spits out information advising farmers on exactly when and how much to irrigate their crops, taking the guesswork (and overwatering) out of irrigation. Scholasch says estimates show farmers can cut water usage by 20 to 50 percent. So far, the company has about 100 customers, 70 of whom are in California. Fruition Sciences is now experimenting with tree crops. California produces 82 percent of the world’s almonds, and the tool could be a boon for the notoriously thirsty plant.

Nearly three hours inland from upscale wine country is California’s Central Valley, the state’s agricultural center and one of the regions hardest hit by drought. Here, in the farming community of Firebaugh, a radical experiment is taking’place. Seawater desalination, the process of removing salt from ocean water to produce fresh water, is thought by many experts to be an unlikely option for replenishing the state’s supply in the near future. The amount of energy required to complete the process renders the resulting water massively expensive. Santa Barbara built a $34 million desalination plant to process seawater in the early 1990s; it was never used past the testing phase. But startup WaterFX is reinventing desalination. Their demonstration plant processes agricultural drainage water, which can contain saline levels higher than seawater. It also operates using solar energy, reducing the energy costs of traditional desalination. Finally, the young company hopes to find viable uses for the byproducts of the process, which co-founder Aaron Mandell says can be used in everything from construction materials to health supplements. The project was paid for with $1 million in state funds from the Department of Water Resources, with a little bit of private capital on top.

Paying for the project with only private funding, says Mandell, would have been a challenge.

“We’re only a couple hours from Silicon Valley, so you’d expect it’d be very easy to identify funding for this type of project,” says Mandell. “But it’s actually a bit challenging because a lot of the investors in the Silicon Valley area are very focused on web and mobile and the next Facebook – and not very focused on drought technology.”

Eventually, the plan is to turn WaterFX into a new kind of water utility from which farmers and other large water users will buy their water directly. But it might not be as cheap as many consumers are used to.

Money, in the end, is what drought is all about.

Money, in the end, is what drought is all about. Whether it’s fallowing fields or paying higher prices for water or digging wells, dollars flow down the drain. But what if we knew when a drought were coming? If farmers had that information, they could opt to buy less fertilizer, sell their water if they decided not to grow and buy more insurance. In short, they could save millions of dollars.

“That’s the Holy Grail,” says Mark Svoboda, a climatologist at the National Drought Mitigation Center in Lincoln, Nebraska. “If I could predict drought, I would be calling you from my yacht.”

But predicting drought is exactly what Amir AghaKouchak, assistant professor at the University of California, Irvine, is doing. His project, the Global Integrated Drought Monitoring and Prediction System (GIDMaPS), came online in 2012 and combines data from NASA satellites with data collected from ground stations worldwide – some as simple as buckets that collect rainwater. This more recent data is then coupled with long-term model simulations in order to predict when and where drought might occur. AghaKouchak says that they can now predict drought six months in advance, and he hopes to increase that margin.

AghaKouchak’s biggest stumbling block, as with other water innovators, is money. He needs more servers and more people to help grow the project. Even in the academic sector, cash for water tech is scarce. AghaKouchak has a patent pending for the GIDMaPS technology, and the plan, of course, is to find a way to build and market an app. 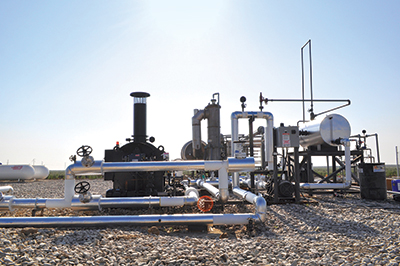 Danny Merkley, director of water resources at the California Farm Bureau Federation, sees promise in new technology, but also says that change can take time. It’s all about the bottom line, he explains. Farmers can’t afford to adopt innovations until they’re economically feasible. That was the case with drip irrigation, a method of spoon-feeding crops water and nutrients at their roots that can cut back on water use while substantially increasing a crop’s yield. It was a major technological innovation that took about 20 years to be implemented on farms in California.

Merkley stresses that farmer subsidies for technological upgrades are key, and that he has seen opinions shift amongst his environmental colleagues, many of whom no longer deride such programs as handouts.

At this point, spending more money for water innovations may be our only option. Heather Cooley, water program director of the Pacific Institute, a California nonprofit that studies water issues in the state and abroad, says we’ve exhausted the inexpensive sources of water. The next increment of supply – technologies like water recycling or desalination – is just more expensive. Prices are not just higher for farmers, but for urban consumers. For decades, water bills have been rising faster than inflation and outpacing the cost of other utilities. Water is money, and the drought has only stressed the need for technology that conserves both.

Back onstage at the Water Gala, the winners of the 2014 competition are announced: a company that turns food waste into a fertilizer that can be used in place of traditional, nitrate-heavy fertilizers, and a company that uses aerial imaging to help farmers make irrigation choices. In the realm of awards galas, there is little pomp and circumstance, just a handshake and applause. But for drought-stricken California, it may mark a turning point toward greater investment in sorely needed water-saving technology. This year marks the biggest turnout for the gala so far. Around 300 bodies packed the floor at the $75-a-head event. All heads crane to watch as the winners, newly crowned investment opportunities, leave the stage.