Hope and Hardship: The Life of a First Time Farmer - Modern Farmer
Lifestyle

Hope and Hardship: The Life of a First Time Farmer

Many urbanites think of leaving the city and starting a farm, and a growing number do. Photographer Whitney Light spend a year following a couple who left their jobs for the dirty life of the farm and a dream of sustainable agriculture. 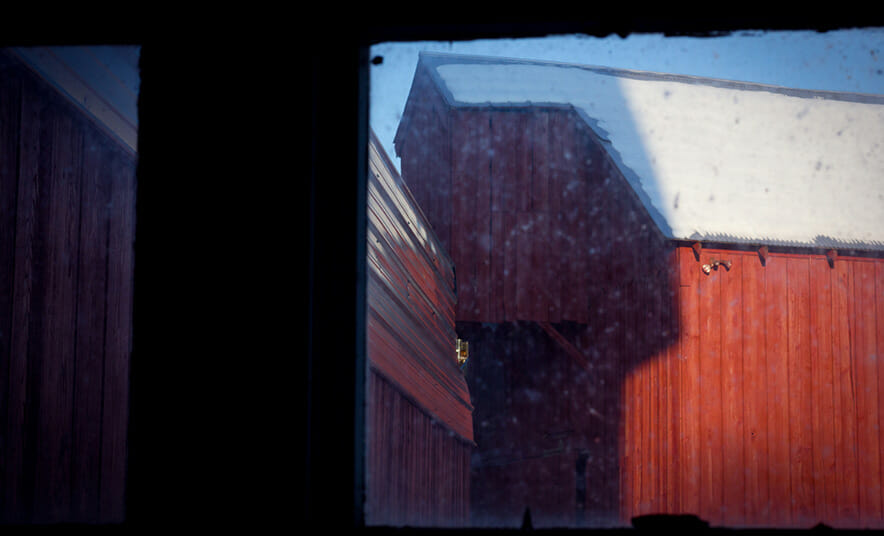 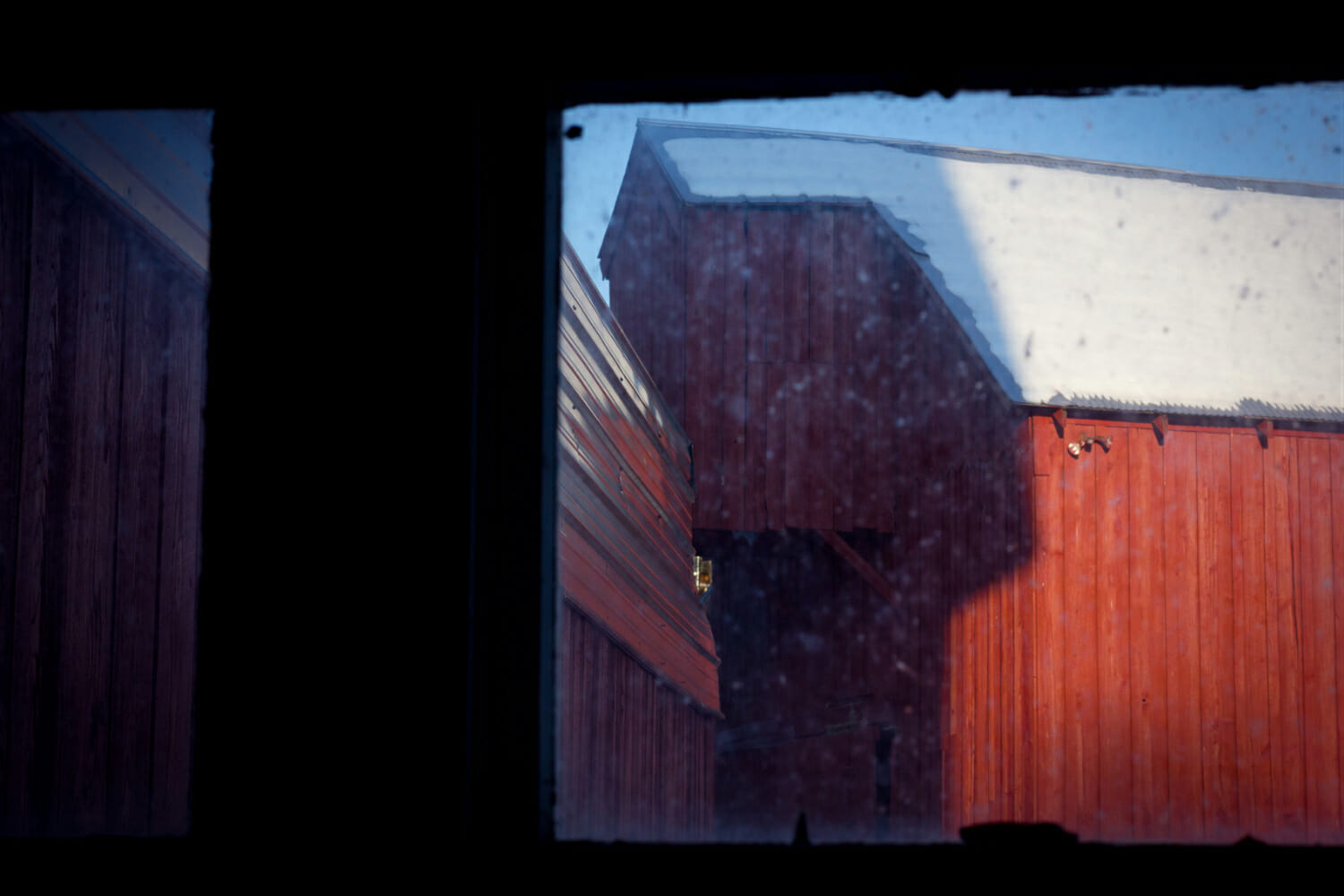 Eight years ago, Kate and Dan Marsiglio left emerging teaching careers for the dirty life of the farm and a dream of sustainable agriculture. With $25,000 in savings they moved onto the old 90-acre Catskills dairy where Dan’s parents had retired. The couple planned to raise organic meats and vegetables, and build a community around the farm. Today that vision is more or less complete. More than 200 families buy from the harvest each year. The Marsiglios themselves eat three-quarters of their meats and vegetables from the farm, and live with their two children in a woodstove-heated farmhouse that Dan built. But while this setup may sound bucolic, it is never easy. 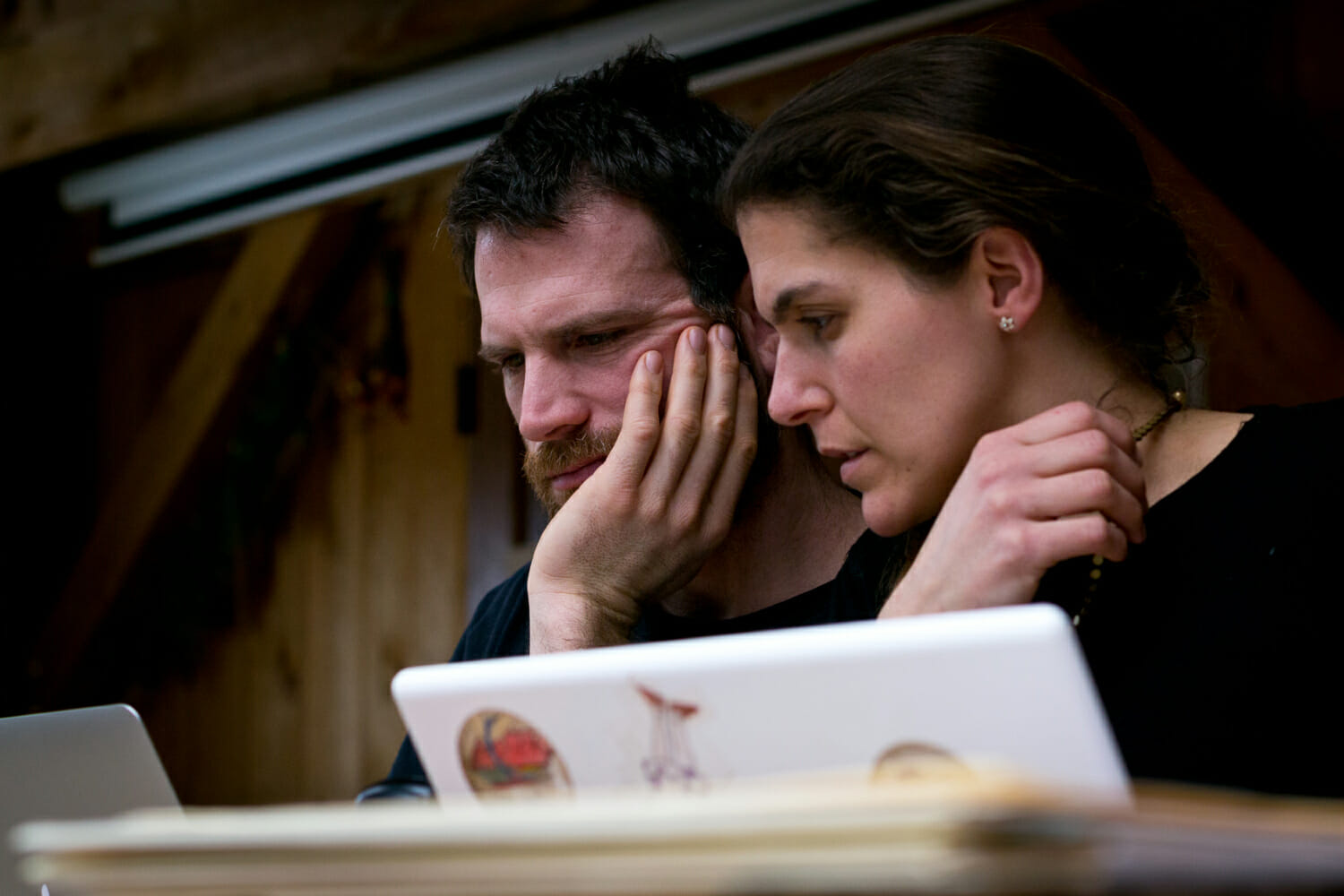 In some ways, the farm has delivered the life they envisioned. They “never envisioned making a lot of money,” Kate said. Twenty-eight and 30 years old at the outset, the couple saw the farm as an enormous blank slate. Now, however, retirement looms “foggy” in the not so distant future, Dan said. They can’t afford hired hands and haven’t amassed any savings. The farm grosses about $40,000 a year and it’s all reinvested. To make a living, Dan takes jobs as a general contractor; Kate has worked part-time at a local library and on contract for a farmers’ non-profit. About a third of the Marsiglios’ income comes from a summer business hosting “farm stays,” rustic vacation packages for city slickers. 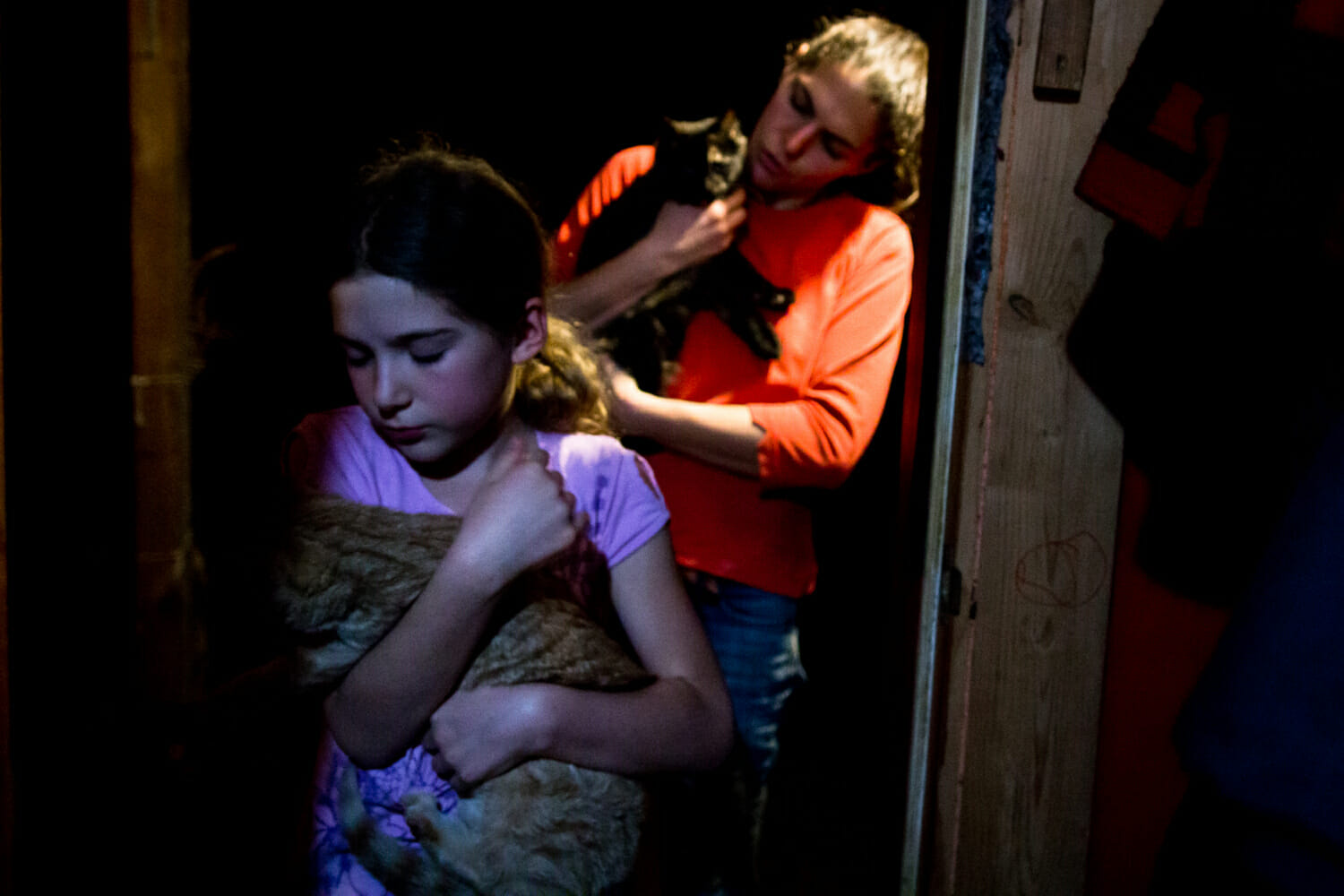 3. Kate and her daughter, Lucia, enjoy time with the farm cats

The lure of a life lived close to nature, providing communities with local and organic food, has beckoned to an increasing number of American families like the Marsiglios this past decade. Nationwide, the number of farmers’ markets jumped from 2,863 in 2000 to 7,175 in 2011. More people are training to farm, too.

“We’ve seen interest in apprenticeships and our Young Farmers’ Conference increase by leaps and bounds,” said Nena Johnson, director of the Growing Farmers Initiative at Stone Barns Center, a farm education non-profit in Pocantico Hills, N.Y. The center began hosting an annual conference in 2005 to assess the needs of a burgeoning group of first-time farmers. The 250-seat event has sold out every year since; in 2012, tickets disappeared within 36 hours. Yet new farmers are also the first to report that for beginning farmers, the honeymoon period is brief. 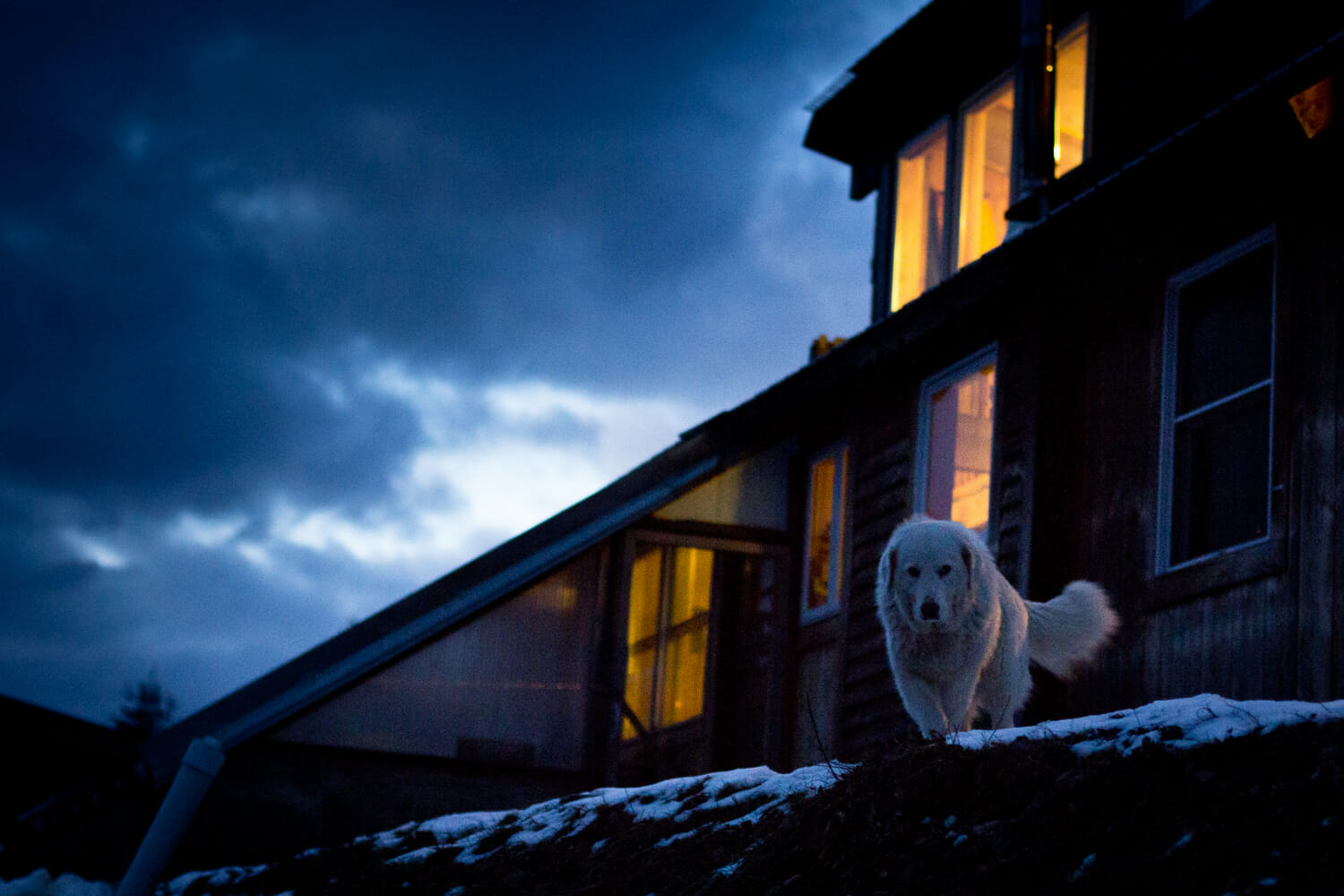 Winter on the farm brings snowy beauty but also anxiety. Cash flow stagnates and Kate racks up $10,000 on a credit card. There’s anxiety about the success of the season to come, and beyond. “The farm needs are endless,” Dan said, sipping coffee one winter night inside the farmhouse, a testament to his background in industrial design. The Marsiglios are aware that time on the farm is time lost for developing other job skills and opportunities. Design work still interests Dan. “I have some ideas to do things that involve different people, different places… ,” he explained, trailing off. Kate sympathized. They aren’t in their 20s anymore. Even if they wanted off the farm, their confidence in their off-farm skills has diminished. “What can we do well?” she wondered aloud. 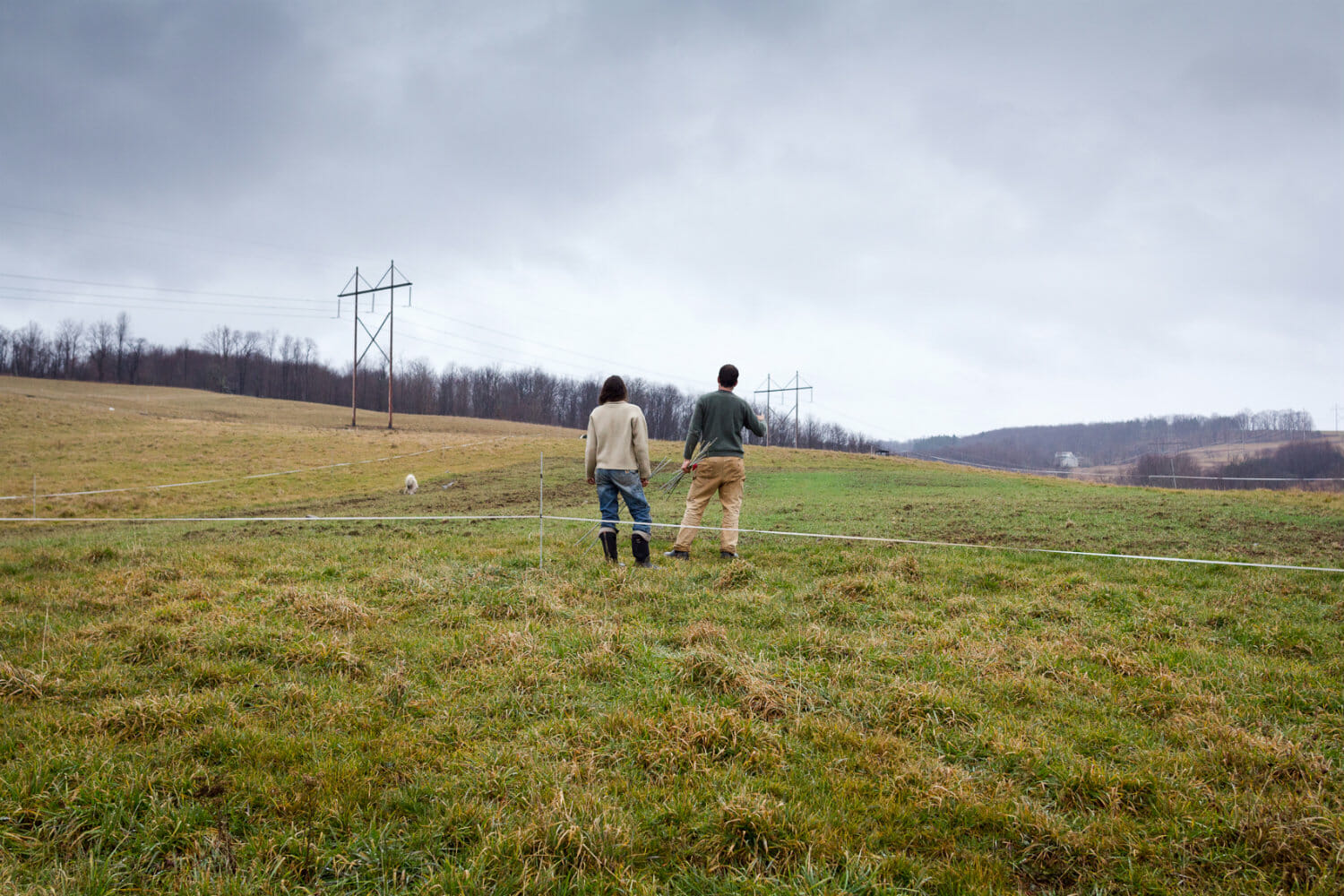 In the beginning, the couple threw themselves with fervor at the difficult terrain. For three years, they schlepped buckets of water up a steep slope to the animal pens. They learned to treat the peculiar illnesses of livestock. One particularly damp season, Kate found maggots covering the whole backside of a sheep hit by flystrike, a condition in which flies lay eggs in living tissue, and combed them out. Mistakes were made. One time they let a bull stay overnight in the same pen as the sheep; the next day the bull roamed free, and a very dead sheep was mangled in the broken electric fence. “You never forget those images,” Kate said. 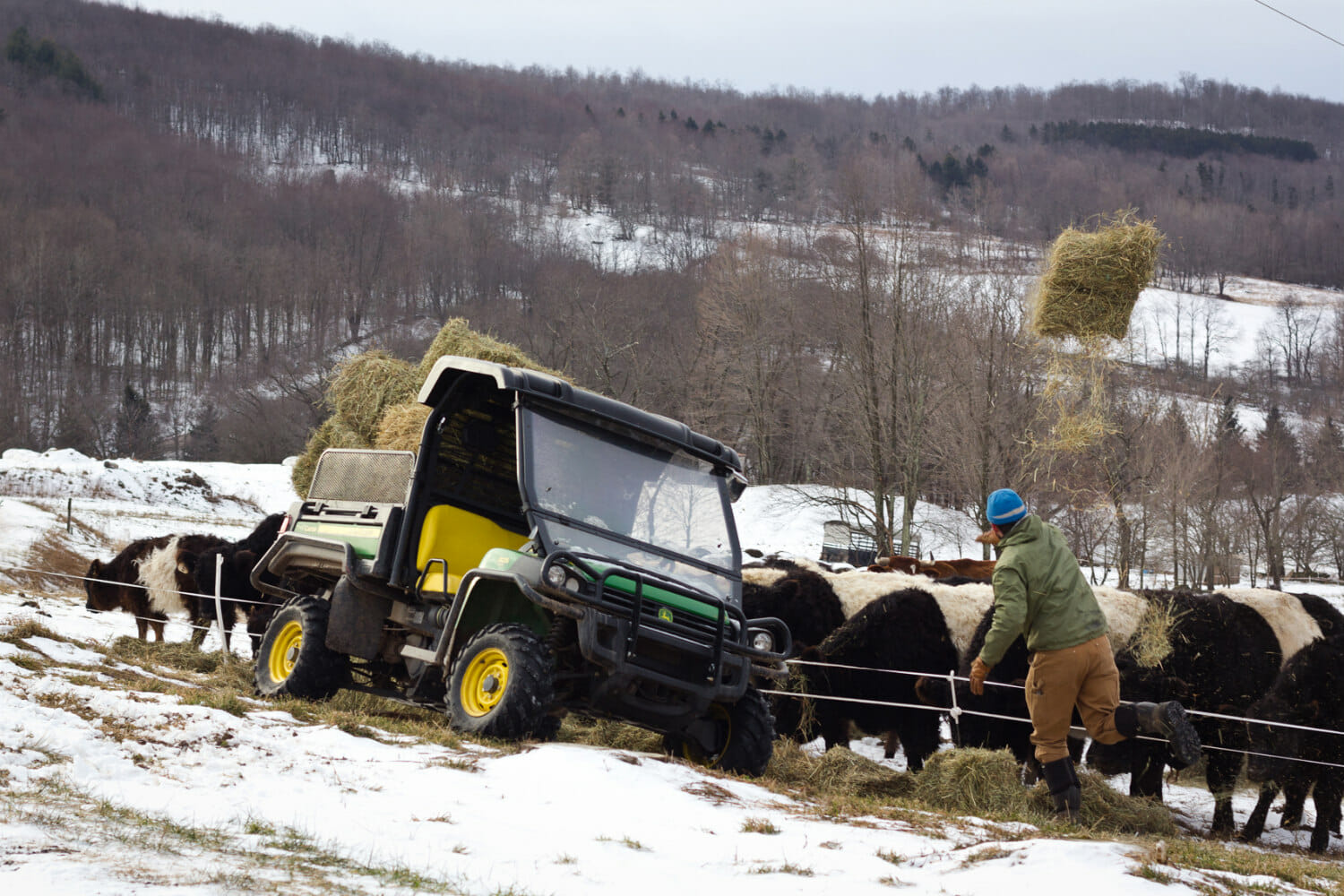 Through trial and error, the couple got better at being farmers. They acquired stronger knowledge of the land and livestock. They established more efficient patterns of pasture, installed a water pump and started a vegetable share. There was the rewarding sense of survival in what was, historically, one of the last settled and most difficult places to farm in New York state. “The country is hilly and much of the soil is thin, stony and naturally infertile,” wrote Ralph Tarr, a Cornell professor of physical geography, in the Bulletin of the American Geographical Society in 1909. “Even with the best agricultural education and the best connections with the markets, it is very doubtful if the American farmer can in large numbers be retained contentedly on the farms of the less desirable and less productive uplands.” 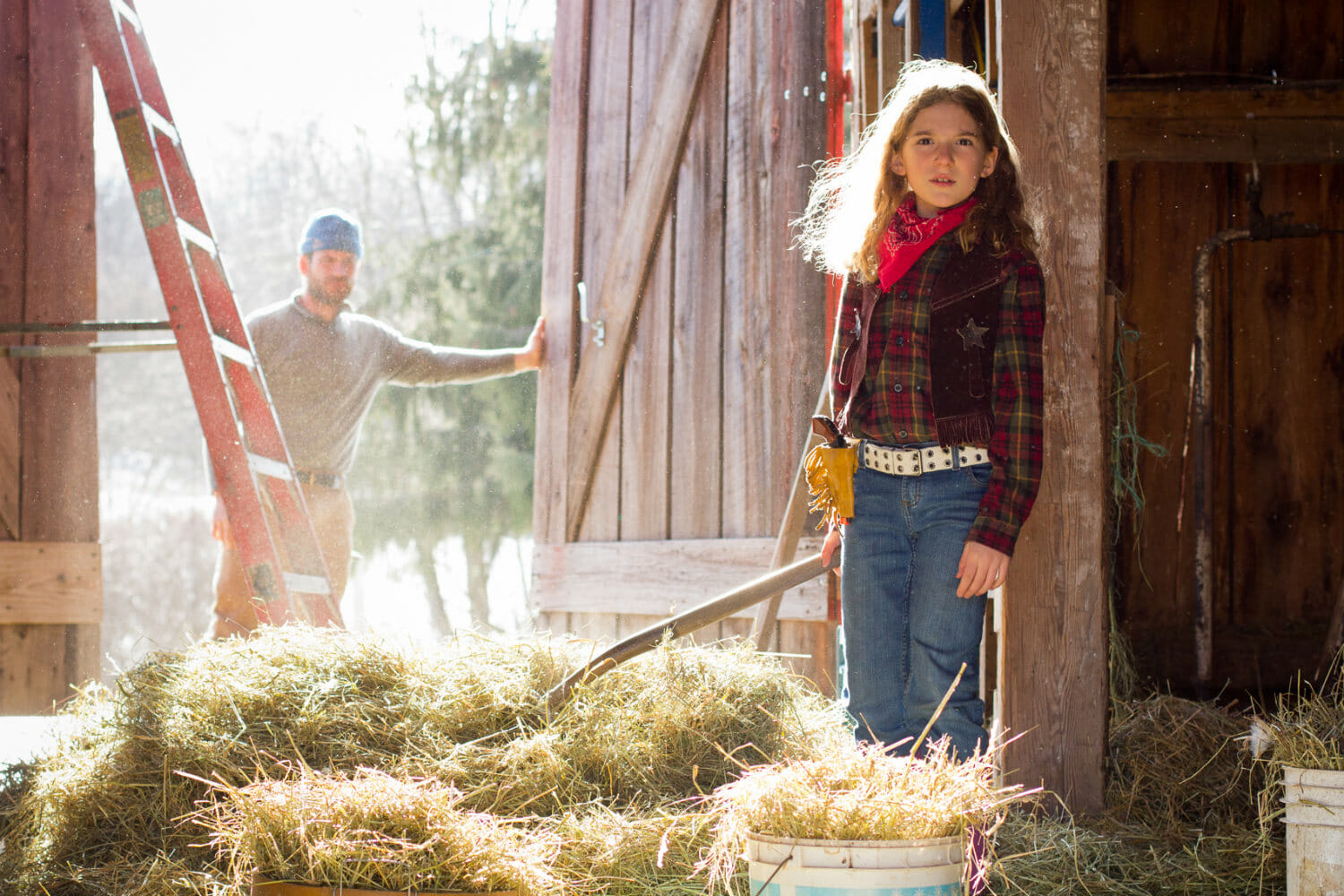 7. Dan fixes the barn door while his daughter, Lucia, plays nearby

One of the pleasures of the farm for the Marsiglios is having family close and the opportunity to teach their children about nature and growing food sustainably. They have discovered that the appeal of this lifestyle extends to other families as well ”“ and therin lies an opportunity to supplement their income. In fall 2008, they started to work with a company to offer vacation farm stays. The company built guest tents equipped with wood cookstoves, canopy beds, linens and kitchenware. The Marsiglios provide weekly homemade-pizza nights, a petting zoo and farm tours. It’s an opportunity to spread appreciation of sustainable farming and make extra income, but after two years nagging questions also set in. Their focus seemed to drift towards selling the idea of a farm, rather than food. “Are we really a farm anymore?” Kate recalled wondering. “It felt like a charade.” 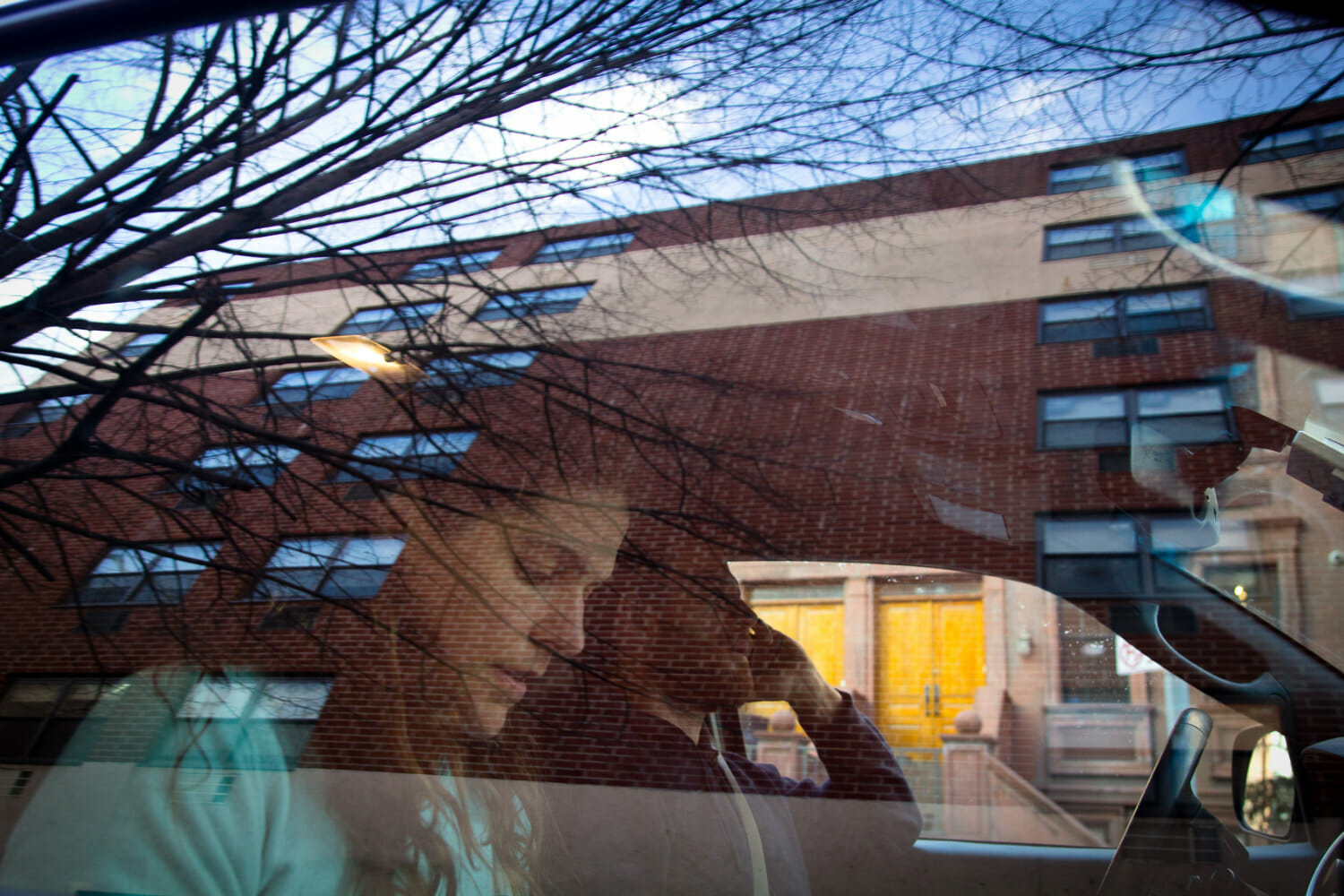 It turns out that past guests of the farm stay are a small but reliable market for farm products throughout the year. The Marsiglios now make monthly home delivery trips to New York City with upwards of $1,300 worth of goods. The delivery charge is $10, so to cover the cost of gas they need at least six orders. Even so, the profit margin is slim at 25 percent, Kate estimated. But that’s better than the 10 percent they might make selling wholesale, she said, and “I have to sell my product.” The regular delivery route is a day-long trek on state Route 17E into New Jersey, Manhattan and Brooklyn. 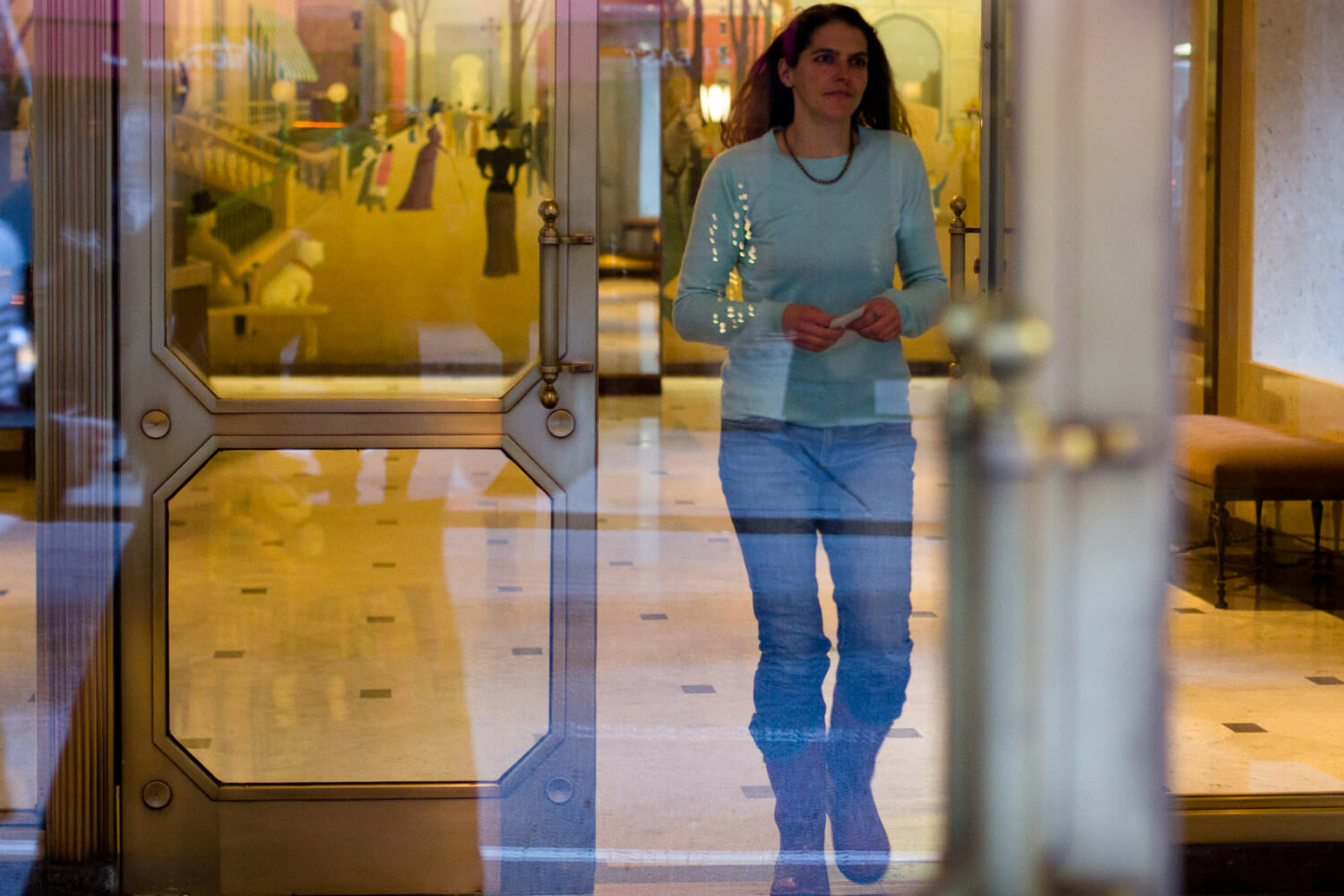 9. Kate on a food delivery to a customer in Manhattan

Although the farm stay takes time away from actual farming, Kate appreciates the sense of community it’s built. “I realized we’re the farmers who educate,” she said. Sometimes she and Dan think about the financial security and work satisfaction they might have found had they stuck with their first careers. Yet for now they will continue on the farm. But, Kate said, “If you don’t feel love from the activities you engage in, you don’t really keep doing it.”