The Christmas of my childhood involved an old witch who distributed presents instead of Santa and salty fish in lieu of ham or turkey.

I came to Canada when I was nine years old, never having experienced mashed potatoes, stuffing or apple pie. Nor had I ever heard of the old dude in the red suit. For our family, Christmas was celebrated according to Roman Catholic tradition. This meant that the celebrations took place on Christmas Eve, not the following day, and they were all centered around food. Toys and gifts played a minor role, delivered in your stockings by the old Christmas witch called Befana.

The central ingredient for the evening meal was a salt-dried cured cod called baccala. Our Christmas Eve dinners typically feature three dishes (I’ll share the recipes with you below). First was a cold fish salad with garlic, lemon olives and parsley; the second was a fish stew with potatoes and tomato sauce (my favorite); and the last one was an appetizer of fish fritters in the shape of donuts, which are quite addictive if you learn to make them properly. Having said that, I have to warn you that the prep work is not simple.

When you buy this fish (you can find it at an Italian or Portuguese deli), it’s cardboard-stiff. It must be soaked in water for a few days and I suggest you do the soaking in a basement or garage, as the odor is, well, fishy. When they were younger, my nieces and nephews used to refer to the Christmas Eve meal as the “stinky fish” dinner. But, thankfully, when it’s cooked, it doesn’t stink at all.

Our meal was always a noisy and lively affair. We were required to sit at the table until we ate 13 separate items. I am not sure where this tradition originated, as Roman Catholics usually have what’s called a seven-fish dinner, in reference to the seven sacraments and the seven deadly sins. I wondered if our family had committed six additional sins, but my sister, Rosemarie, thinks the number is in reference to Jesus plus the 12 apostles. I recall trying to pace myself through the meal by not having a second portion of the fish stew. We were allowed to include items like a roasted chestnut or a mandarin orange to achieve our 13 courses.

I have fond memories of our Christmas Eve dinners. My mother worked all day preparing that meal and we all miss her fabulous cooking, but mostly, her presence. We are keeping the tradition alive in her honor. My sister makes the three fish dishes and the rest of us chip in with additional vegetable side dishes. I make a chickpea-broccoli soup, which was also one of my mother’s recipes.

Before I get into the recipes for these dishes, I’d like to leave you with some words from my sister, Rosemarie, who offered this tribute to my mother:

These recipes passed down from our dear mother, Domenica “Micuccia” Fiore, carry with them the loving memories of days past. We hope that in carrying on the tradition of serving these dishes, we will keep her spirit and her voice forever present within our hearts.

Amen to that.
Merry Christmas to all.

BACCALA DISHES FROM THE CALABRIA REGION SERVED ON CHRISTMAS EVE

Baccala (or salted cod) can be bought from the refrigerated units of Italian and Portuguese grocery stores in slabs or chunks, and either with bone-in or deboned. Prior to cooking, however, baccala must be desalted a minimum of 48 to 72 hours hours. It must be submerged in cold water, which needs to be completely changed every eight hours, or as often as possible during this time. 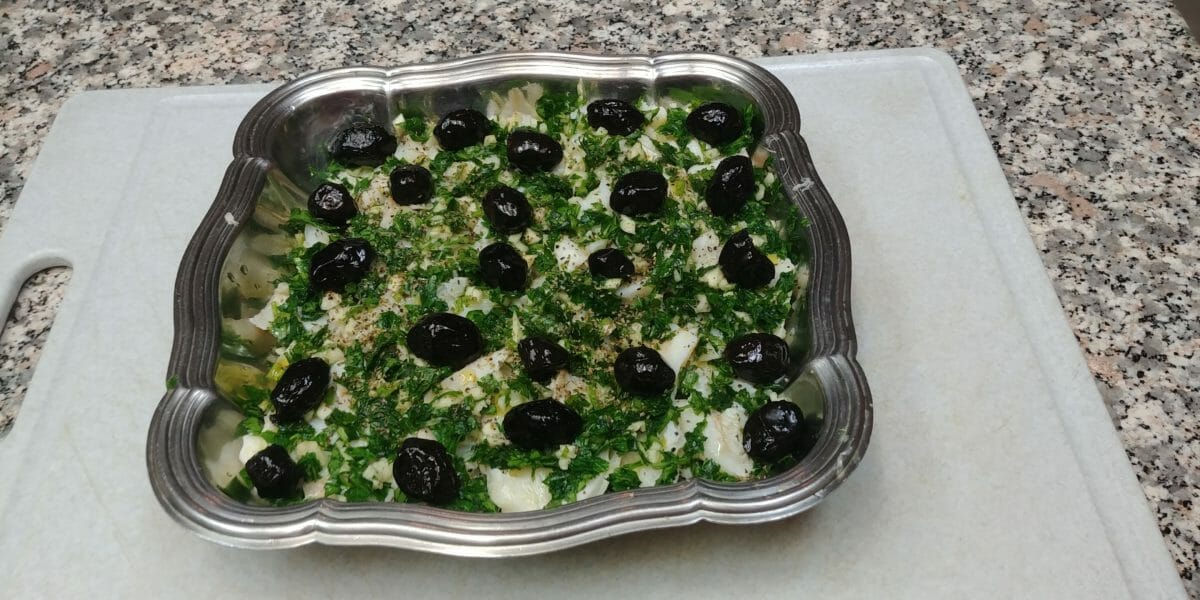 After desalting the baccala, fill a large pot with water. Add the top of a fennel bulb (the feathery leaf part), two stalks of celery cut in half and six whole garlic cloves. Bring the water and these vegetables to a boil and then simmer for 15 minutes.

After 15 minutes, add the drained baccala to the pot of boiling vegetables, bring it to a boil again and simmer for another 10 minutes.

Finally, remove only the boiled baccala from the pot (leave the celery, fennel and garlic cloves in the water behind, you won’t need them any longer) and rinse the fish under cold running water in a colander.

Finely chop four garlic cloves and mix them together with a bunch of finely chopped parsley. Cut the lemon in half.

Break the baccala into flakes and in a serving dish spread one layer of inflakes to cover the entire bottom of the dish. Then, cover this layer with the chopped garlic and parsley mixture.  Squeeze some lemon juice and sprinkle with ground black pepper and oregano. Then drizzle some extra virgin olive oil evenly on top. Now place a second layer of the same ingredients, starting with more baccala flakes, and ending with another drizzle of olive oil.

Garnish with black Moroccan olives or any other type of olives. You can also skip the olive garnish if you want. Refrigerate and serve cold for Christmas Eve. This dish should be prepared a day in advance. 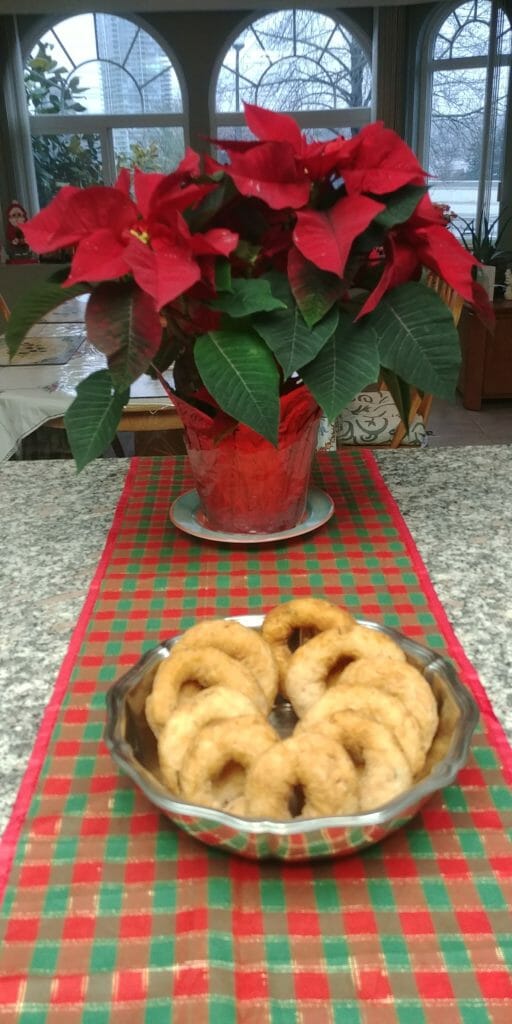 Mix this into a dough and work the dough well.

Cover the bowl of dough with a clean cloth or dish towel and allow to rise in a warm place away from draughts for a couple of hours or until it has doubled in volume.

After the dough has doubled in volume, uncover and roll pieces into donut shapes by first rolling a piece of dough and then joining the ends together. Place the donut-shaped zippole on a clean tablecloth. When all the dough has been rolled into the donut-shaped zippole, cover them with a clean dish towel and allow them to rise for one or two hours. Once the zippole have risen, prepare a deep frying pan with cooking oil and turn the heat to high at first. When the oil is hot, place the zippole into the frying pan and fry until golden. You may have to turn the heat down a little as the oil gets hotter. Do not overfry. Place the fried zippole on a dish layered with paper towels, cover and serve warm for Christmas Eve dinner.

Please note: Zippole are not usually made into donut shapes. In fact, most often they are fried in more or less irregular round shapes, which makes the entire process much faster as they would not have to be shaped into donuts. Also, zippole or fritelle are often made as a sweet donut or fritter with all kinds of flavors. Our mother chose to make the savoury version with baccala and also in a donut shape. In our home, the zippole di baccala were made right on Christmas Eve and served warm for dinner that evening. 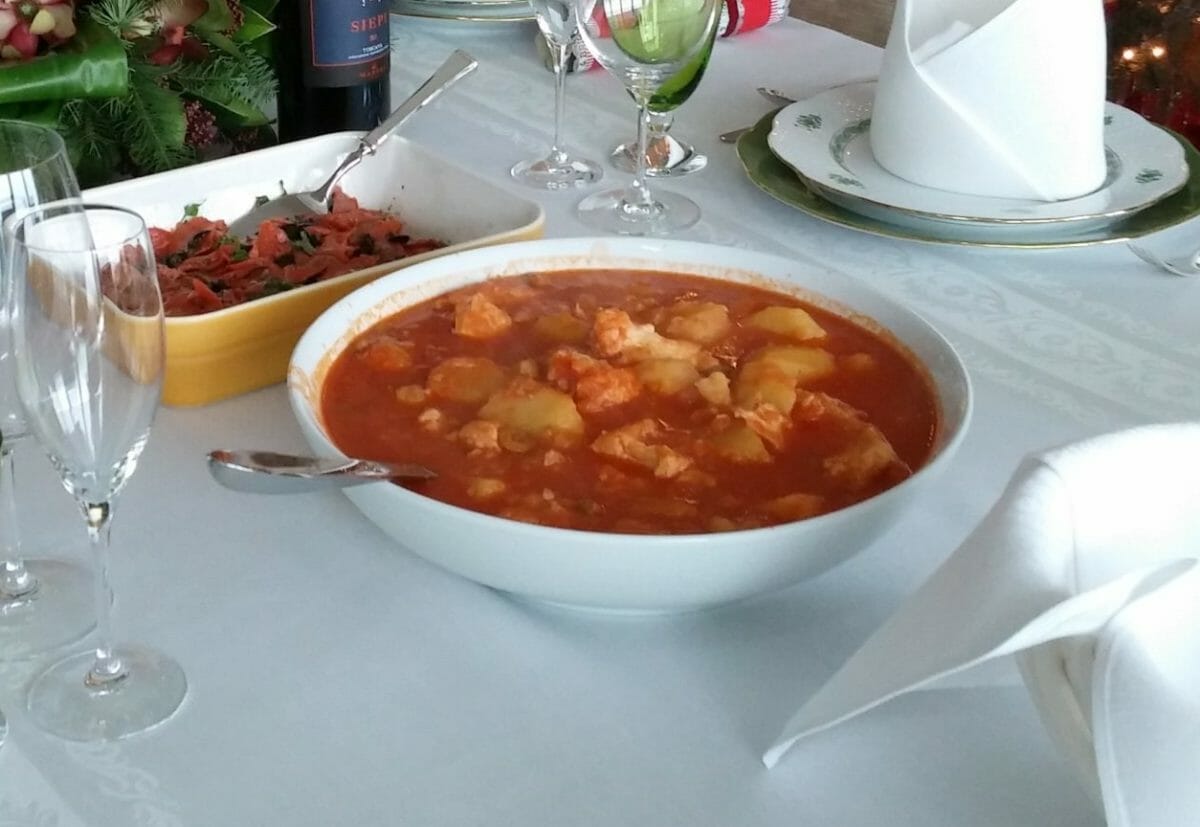 Mix the flour with salt, pepper and garlic powder to taste. Coat the baccala pieces with the flour mixture. In a frying pan, heat the vegetable oil and fry the coated baccala fish until golden. Remove the fried baccala from the pan, draining all the oil, and set the fish aside in a dish.

Transfer the oil in which you fried the baccala to a cooking pot and reheat it. Add the chopped onion and saute it until golden. Then add the chopped garlic and saute as well. Add the canned stewed tomatoes, the sliced, pitted green olives, the capers and the finely chopped celery leaves. Finally, add a full can of water (use the empty can of tomatoes as a measure). You don’t want to make this into a thick tomato sauce but rather a more liquid version suitable for a stew, bearing in mind that some of the water will evaporate as you simmer this sauce. Bring the pot to a boil and immediately lower the heat. Simmer this tomato sauce for about an hour.

While the tomato sauce is cooking, peel and cut the potatoes into quarters. It’s a good idea to do this ahead of time and have the potatoes peeled and quartered set aside under cold water. The number of potatoes you use is at your discretion, but bear in mind that they have to be enough to balance with the amount of baccala and tomato sauce you have.

In a separate frying pan, fry the potato quarters until golden and set aside. Make sure the potatoes are dried so they don’t splatter when added to the hot oil in the frying pan.

Serve this as the main dish on Christmas Eve with the other two baccala dishes. This recipe can be doubled or tripled easily, but bear in mind that preparation time (peeling, cutting potatoes, etc.) will increase with larger quantities.

The Art of Urban Permaculture
How to Make the Best Lasagna in the World
Machine Learning: the Future of Farming
Climate, Conflict and Crisis


Explore Modern Farmer
Related
Features, Food & Drink, Fungi
Could New York Become the Mushroom State?Sara Foss
Food Security, news
Record-Breaking Egg Profits Prompt Accusation of Price GougingClaire Carlson, The Daily Yonder
Features, Personal Essay, Water
The Cold Swim HomeMarcie Callewaert
Books, How-To, Lifestyle
How to Turn Your Garden Into a Business, No Matter the SizeEmily Baron Cadloff
wpDiscuz
We use cookies on our website to give you the most relevant experience by remembering your preferences and repeat visits. By clicking “Accept”, you consent to the use of ALL the cookies.
Cookie settings ACCEPT
Privacy & Cookies Policy