The rise — and rise — of lawn mower racing. 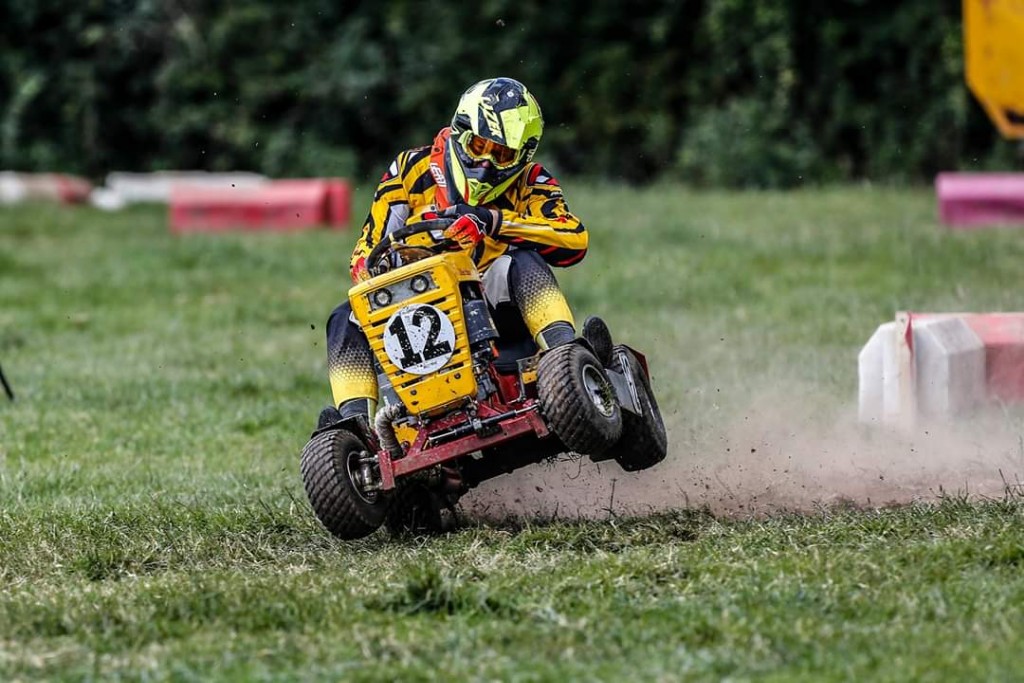 Imagine traveling at 50 miles per hour over rough terrain in a vehicle with no suspension — that’s the deal with lawn mower racing. This bone-jarring, populist sport typically unfolds on a twisting, bale-lined dirt track for marathon-long stints.

“It is knackering,” says Leslie Pantry, race director and enthusiast for the British Lawn Mower Racing Association, using the British slang term for “exhausting.” Although the blades are removed, racing lawn mowers is still risky. During a 2017 sprint in Capel in southern England, Pantry was going downhill at 50 miles per hour when he crashed, smashed eight ribs and broke his collarbone and neck. “I’ve slowed down a little bit,” he says.

Still, Pantry is passionate about this affordable, accessible sport. “It’s exciting — the speed, the racing, everything about it,” he says. Pantry says that it’s a team sport, as competitive as Formula 1, and he has won countless races. What’s his secret? “Attention to detail,” he says. “Obviously, if you want to win, you have to put the money in: You need a new engine and new tires. I’m an aircraft mechanic, so it all has to be just right.”

The sport dates back to 1973. While chatting with friends in a country pub, grassroots Irish motorsports enthusiast Jim Gavin saw a groundsman mowing the village cricket pitch and had a eureka moment. Buoyed by a cheap and cheerful vibe, Gavin’s invention soon gathered momentum. The feel-good pursuit has drawn a string of stars from sports and show business. Devotees include former Formula 1 ace Sir Stirling Moss and hell-raising actor Oliver Reed.

Now, grass-guzzler races take place across Europe, including Finland, which hosts a chilly 12-hour marathon. The sport is also big in the United States and Australia.

As with Britain, the official Aussie creation myth says that Australia’s first race originated in a Victorian country pub in 1988. After an alcohol-fueled spat, five men challenged one another to a hillside race. Driving unmodified Briggs & Stratton mowers, the original turf busters chugged up the slopes, belching smoke, rounded an appointed gum tree and hared downhill in “angel gear” (outback slang for “neutral”) to the finish line.

“Half of the town’s 100 people, 300 sheep and 150 dogs were there,” according to a quote ascribed to Brian Ross, six-time president of the leading club, the Australian Ride On Lawn Mower Racing Association (AROLMRA).

AROLMRA secretary Carilynn Mackay says the activity plays to a love of grassroots motorsports. “It’s also within the average Joe Blow’s budget,” says Mackay, whose son and husband race. “And we all love the camaraderie and friendships you make along the way.” She accepts the dangers as well. “There’s no motorsport in the world that comes without risk,” says Mackay.

Outsiders who have not “been or seen” fail to grasp what kind of sport it is altogether. “They have this vision of you running along with a push mower,” she says. AROLMRA drivers go considerably faster. “We’ve had radar on them a few times,” she says. “I know that our A-class boys have been clocked at anywhere between 50 and 56 miles per hour.”