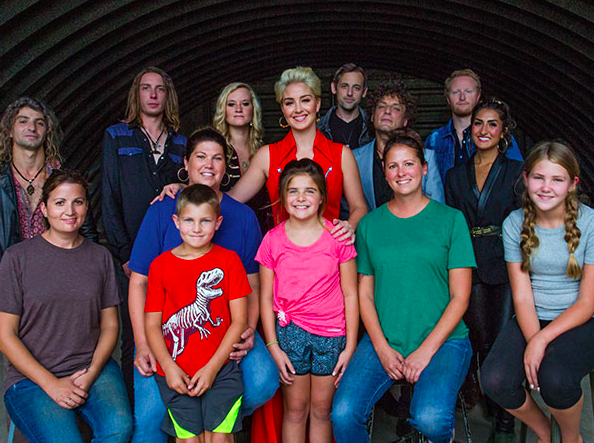 Land O’Lakes is getting political. In August, the century-old dairy cooperative launched a social media campaign to enlighten Americans to the fact that not all farmers fit the old-man-in-overalls stereotype – in one out of every three cases, it’s a woman inside those dusty boots.

Thanks to Land O’ Lakes’ deep pockets, the female farmer project now has a theme song. They hired Nashville diva Maggie Rose, whose music Rolling Stone describes as “earth-conscious, trippy country-soul,” to re-tool Old McDonald Had a Farm as a feminist anthem.

She-I-O, co-written by legendary songwriter Liz Rose, whose writing credits include a couple of Taylor Swift albums, is no nursery rhyme: it’s a foot-stomping call-to-arms propelled by Rose’s hard-rocking 13-piece band and her caterwauling vocals: “She’s five-foot-two and ten feet tall,” sings Rose of Old McDonald’s daughter. “She makes the most of her strong arms/She feeds the babies and runs the farm.”

“This is personal to me: I’m a foodie, I love to cook, and my husband’s family has run a cattle farm in southeast Missouri for five generations,” said Rose in an email to Modern Farmer. “I have always been a proud feminist and never understood the connotations that come with the ‘f-word’. Even though the concept of equality is simple, women still face challenges in male-dominated industries.”

Rose added that she was proud to throw her spotlight on some “unsung sheroes” of the ag world who are being featured in the campaign’s music video and TV ad spots. These include Land O’Lakes farmer Lori Dotterer, who raises 900 dairy cows on her family’s Pennsylvania farm together with her cousins, Candice and Amanda.

“There are so many misconceptions around women in farming,” Dotterer told Modern Farmer. “When people come to the farm asking for who’s in charge, they’re still surprised to learn that I’m responsible for managing our operation.”

The number of female farmers in the United States has tripled in the last thirty years. Dotterer, whose aspiring-farmer niece was also in the video, hopes She-I-O will kick that trend into overdrive. “Increasing awareness of female farmers is an integral part in changing people’s perceptions. It’s very important for me to pass down this legacy: I look forward to the next generation keeping this vision alive.”