A Dairy Queen Of a Different Kind: Meet 2018’s Princess Kay of the Milky Way

Each year, The Minnesota State Fair crowns a new Princess Kay. Part of the honor? Being immortalized in a bust of butter. 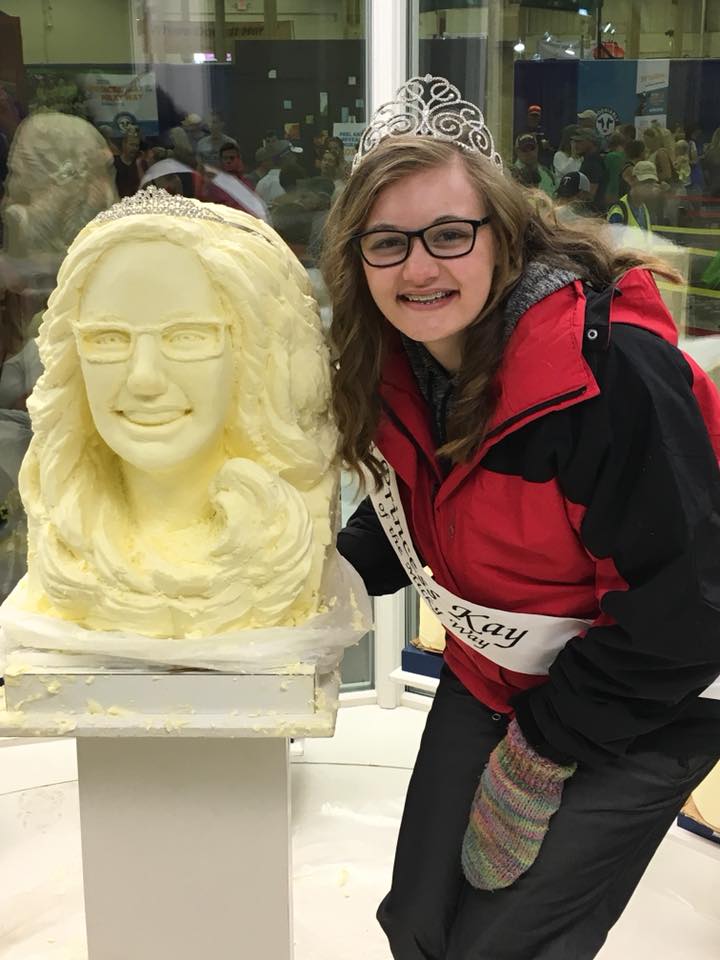 Princess Kay and her butter sculpture. "It even has a pair of glasses on it, which is fun," says 20-year-old Rebekka Paskewitz.
Photography Midwest Dairy
Share
Tweet
Pin
Email
464 Shares

During her year-long reign as Princess Kay of the Milky Way, 20-year-old Rebekka Paskewitz will visit classrooms, pose for photos with local politicians, tour creameries and farms, and perform the many other duties that come with being an ambassador for Minnesota’s dairy community.

But none of that is likely to rival the spectacle that took place just hours after last Wednesday’s coronation at the Minnesota State Fair, when Paskewitz donned a parka and entered the “butter booth,” a refrigerated pod where artist Linda Christensen carved her highness’ likeness into a 90-pound block of butter. “I sat for six hours, but we took occasional breaks,” she says. “The sculpture is looking good! It even has a pair of glasses on it, which is fun.” 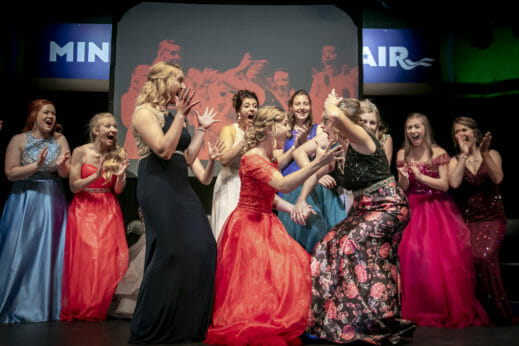 Rebekka Paskewitz, a 20-year-old college student from Browerville, Minnesota in Todd County, was crowned the 65th Princess Kay of the Milky Way in an evening ceremony at the Minnesota State Fairgrounds Aug. 22. Photo by Matt Addington

Naturally, a revolving, glass-enclosed booth lures plenty of spectators, as well as media both national (Entertainment Tonight) and international (this year, a camera crew traveled from France.) Christensen, the fair’s official – and only – butter sculptor for the past 47 years, spends most of her time inside the enclosure, where the temperature tops out at 40 degrees. After she puts the finishing touches on Princess Kay, she churns out 11 more sculptures, one depicting each of the contest finalists, and one for every day of the fair’s 12-day run (check out the official Facebook page for photos of the other contenders and their sculptures). Given that schedule, she was unavailable to comment for this story, but in a recent interview with Dairy Good, an industry website, she said, “The sculptures can last years. After I finish them and the princesses box them up and take them home, they go on to live lives of their own. One was featured in National Geographic and then was even pictured in a ‘Jeopardy’ question.”

As it turns out, there was never a real Princess Kay; the name was chosen in 1954 from more than 10,000 contest entries. And although the title involves a tiara, a sash, and other trappings of an old-school beauty pageant, this is no cushy smile-and-wave gig. Twelve finalists are chosen from a pool of about 100 young women, all of whom must first serve as dairy ambassadors on a local level. (Paskewitz was an ambassador and a dairy princess representing her home turf, Todd County, for a full six years before competing for Princess Kay.)

In the week leading to the coronation, finalists attend leadership seminars and undergo a rigorous screening process “similar to a job interview,” says Paskewitz. “The judges see us six times. There’s a mock media interview, we’re asked to write a blog post, prepare a speech, and also speak extemporaneously.”

Unlike some of the other finalists, Paskewitz was not raised on a dairy farm, “but it was right down the road,” she says. “I grew up helping my cousins feed calves on the family farm.” Plus, her new role aligns perfectly with her future plans. She’s entering her junior year as an agricultural education major at South Dakota State University and hopes to teach environmental studies at the high-school level.

Over the years, the Princess Kay competition has evolved into a family affair: Most winners and runners-up have relatives who have either earned the crown or have vied for the title. Two of Paskewitz’s cousins, Emily and Sarah, were finalists in 2006 and 2013, respectively, and they have both kept their butter busts intact. “I plan to take a family portrait with my cousins and our sculptures,” Rebekka said, “and then use some of the butter from my sculpture to host a macaroni-and-cheese fundraiser for agriculture literacy.”

To see the video of the moment Paskewitz found out she won, visit this Facebook page (the coronation starts just after the nine-minute mark).