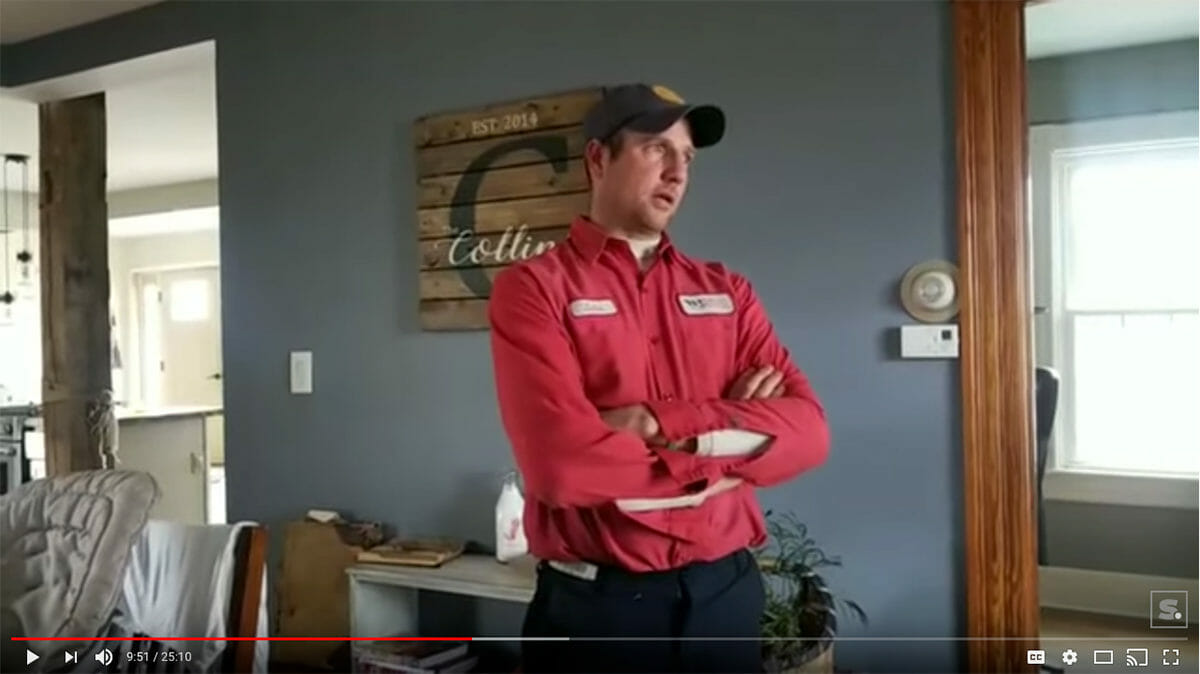 This past Wednesday, ICE officials entered John Collins barn without a warrant - or his permission - and detained one of his employees, whom Collins says has proper documentation to work.
Photography Video: Syracuse.com
Share
Tweet
Pin
Email
2K Shares

The saga of an ICE raid on a farm in upstate New York has sparked concern at the highest levels about the way ICE operates; an initial Syracuse.com story has provoked widespread outrage, including criticism from New York Senator Kirsten Gillibrand.

This past Wednesday, John Collins, who operates a farm with 140 dairy cows in Rome, New York, discovered a cadre of men identifying themselves as ICE officers scuffling with one of his employees in his barn. Collins describes the event in an interview conducted and taped by immigrant advocate Lillian Jeng-Wheeler (embedded above). The farm operator says the ICE agents wore no clothing indicating their status, and insisted they did not need a warrant to come into Collins’ barn. “We don’t have to leave the premises,” Collins recalls the agents saying. The ICE officers also did not present any paperwork, which Collins says he repeatedly requested. (For the record, yes, ICE does need a warrant to go onto private property.) “I told them you can’t come in here without a warrant. They can’t take someone and throw them up against the wall because of the color of their skin.”

Their target was employee Marcial de Leon Aguilar. Collins says that Aguilar has all the proper paperwork to work legally on his farm, and that the employee has been paying taxes throughout his employment.

In the video, Collins describes how the ICE officers roughly arrested Aguilar in view of his two young children while refusing to answer Collins’ questions. The agents interrogated Aguilar, who Collins says was very cooperative. “I think maybe the fact that he wasn’t talking was pissing them off,” says Collins. At one point, the farmer owner took out his phone to video tape the interaction, only to have the ICE agent pull it from his hands and throw it across the road. Collins was then cuffed for a short period of time and threatened with arrest after speaking up for Aguilar and insisting he wanted to accompany his employee to wherever the agents were taking him. “It’s very intimidating, when they’ve got eight of these guys…. There was not one thing that had ICE on them [clothes] at all,” Collins says on camera. “If someone had told me they were ICE I would have said ‘There’s no way in heck.’ They were scruffy guys, some big ones. And when you’re standing there and they’ve got you in cuffs and they’re all around you, they’re trying to intimidate you, and I don’t go for that. That was B.S. Just a bunch of B.S. That’s not how you treat someone.”

The incredibly complex process of getting an H-2A farmworker visa, explained in a video.

A few hours after the story broke, an ICE spokesperson told Syracuse.com that Aguilar is a Guatemalan national who is illegally in the United States, and that he has a criminal record. That record, says the ICE, includes reckless aggravated assault and, well, illegally entering the country. (According to the FBI, aggravated assault usually means either a threat or an actual act of more severe violence than simple assault; it can be classified as more severe if, for example, a weapon is used. “I will hit you with this baseball bat” would be a threat severe enough to be classified as aggravated assault.) Aguilar has, says ICE, been deported three times already.

For a deeper look at the complex issues around immigrant farm labor, please read
“The High Cost of Cheap Labor,” from the spring 2017 issue of Modern Farmer.

It seems that Aguilar’s location was discovered after his wife, Virginia, who is several months pregnant, was caught crossing the border illegally. Virginia, who is living on a house on Collins’ property with her husband and four children, is seeking asylum due to violence in her native Guatemala. The Aguilars have been working with authorities on the asylum process – to the extent even that she’s been wearing an ICE-issued ankle tracker – and Aguilar has also attended some of Virginia’s meetings with ICE on the topic. “That’s what boggles me,” Collins says in the video, his voice beginning to crack with emotion. “We’re working with the system and this whole things happens, and it’s like no respect for him, no respect for his kids. To see Virginia come out of her car and, you know, see her breakdown to her knees. She’s saying, ‘Why don’t they take me? Why are they taking him? I was the one who got caught.”

Shortly after the initial news story published, Senator Gillibrand tweeted that she was “deeply troubled” by the manner in which the ICE agents conducted the raid. ICE, for its part, told Syracuse.com that Aguilar was in a “publicly accessible area.”

What will happen to our food system if Trump Builds a Wall? Nothing good.

ICE agents have previously raided farms in California; a sweep in February led to the arrest of 232 people in California’s agriculture-heavy Central Valley. Collins says that this is the first raid of this type he’s heard of in this area. Many farm groups fear that large-scale sweeps of undocumented immigrants could cause labor shortages in the agricultural industry, where an estimated six out of ten farmworkers are undocumented. Collins himself in the video says “You know, the dairy industry is struggling as it is right now. What are we going to do without labor? I don’t know… Something has to happen if this is the way it’s going to be, if they’re just going to deport everyone out of here.”

This is very attention-grabbing, You’re an excessively skilled blogger.
I’ve joined your rss feed and look ahead to seeking more of your excellent post

Though this incident took place over a year ago, the message is current: In addition to unneccesarally rough and intimidating behavior toward the immigrant, these alleged ICE agents violated the Rights of the Citizen who owned the farm. Law enforcement agents, in this case alleged ICE officers, were using the immigration issue as an excuse to behave unlawfully, and to violate the Rights of a citizen. – All law enforcement agents are to provide identification upon request. And we should photograph it. – No government agents or law enforcement officers had the right to enter private property (the barn) without… Read more »