In the words of Oprah Winfrey, "a new day is on the horizon!" 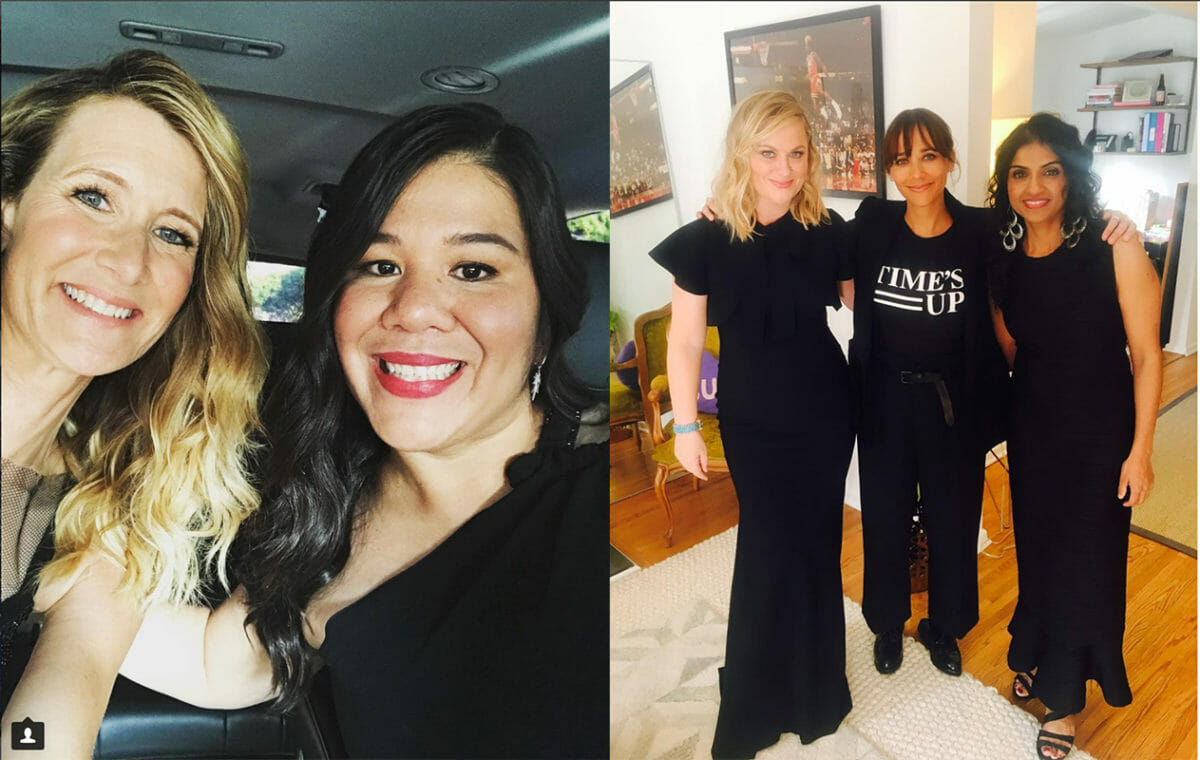 Actress Laura Dern posted this selfie with farmworkers' rights advocate MÁ³nica RamÁ­rez on her Instagram account with the caption, "On our way! Holding our mothers and grandmothers and all brave women who taught us about Voice. #timesup." RIGHT: Actresses Amy Poehler and Rashida Jones with Saru Jayaraman, co-founder of the Restaurant Opportunities Center. Poehler posted this on her Instagram page, writing, "'Me and my date Saru Jayaraman and my wife Ann Perkins! Army of Queens coming for ya!' - #AmyPoehlerÂ #GoldenGlobes #TIMESUP"
Photography Photos: @lauradern and @amypoehlersmartgirls on Instagram
Share
Tweet
Pin
Email
1K Shares

Anyone who watched the awards – or consumed any news today – noticed that instead of the standard rainbow of fancy gowns, this year’s attendees were all wearing black. The dress code was a statement in support of #TimesUp, a movement launched on the first of the year by some of the most notable women in Hollywood dedicated to ending gender inequality and injustice everywhere from “movie sets to farm fields to boardrooms alike.” The organization also runs a legal defense fund the help provide legal support to those who’ve experienced sexual harassment, assault, or abuse in the workplace.

In what might well be the first-ever mention of farmworker rights in Golden Globes history, several actors and personalities made it a point to bring attention to the plights of agricultural and food workers. Laura Dern, who was awarded a Golden Globe for her performance in the HBO miniseries Big Little Lies, brought farmworker’s rights activist MÁ³nica RamÁ­rez as her guest to the event.

RÁ¡mirez is the head of the Alianza Nacional de Campesinas (the National Farmworkers Women’s Alliance), an organization that works to end violence and discrimination against female farmworkers and encourage women in the agricultural industry to step into leadership roles. She recently authored on behalf of the organization an open letter that appeared Time magazine titled “700,000 Female Farmworkers Say They Stand With Hollywood Actors Against Sexual Assault.” Why? As RÁ¡mirez explained on the E! Red Carpet Sunday night, “Farmworker women pick, pack and plant the food that we eat and have a long history of combating workplace sexual violence. When we learned about what was happening in Hollywood, our members felt very strongly that they wanted to send a message to the women in this industry and all women who are experiencing sexual violence in the workplace that they are not alone. We stand with them, and we lend them our power and our strength as they move through this difficult time.” (there’s video over on the Eonline.com if you want to watch the full interview.)

Dern wasn’t the only person to use her platform to bring attention to activists and worthy causes. Amy Poehler’s plus-one was Saru Jayaraman, president of the Restaurant Opportunities Center (Jayaraman is also Director of the Food Labor Research Center at University of California). ROC advocates for the rights of women in the food service industry: chefs, waitresses, servers, bartenders, hosts, runners. As recent news has made obvious, the restaurant industry’s culture of aggressive masculinity has often crossed the line into unacceptable and criminal behavior from coworkers, bosses, and customers. ROC lobbies for laws to address some of these issues, like the elimination of a lower minimum wage for tipped workers. (With a higher guaranteed wage, says ROC, women would not depend on tips as much, and would be able to more freely address harassment.)

The biggest news of the night, undoubtedly, was Oprah Winfrey’s impassioned speech on race, gender, and truth. As big, important stories on sexual assault and gender discrimination have broken over the past year, sometimes those without a voice – including farmworkers – get left behind. And yet Winfrey made sure to mention them. Here’s her quote:

But it’s not just a story affecting the entertainment industry. It’s one that transcends any culture, geography, race, religion, politics, or workplace. So I want tonight to express gratitude to all the women who have endured years of abuse and assault because they, like my mother, had children to feed and bills to pay and dreams to pursue. They’re the women whose names we’ll never know. They are domestic workers and farm workers. They are working in factories and they work in restaurants and they’re in academia, engineering, medicine, and science. They’re part of the world of tech and politics and business. They’re our athletes in the Olympics and they’re our soldiers in the military.

The realities of farmworkers’ lives are hardly publicized to the wider world, let alone during a historical speech – Oprah is the first African-American woman to win the prestigious Cecil B. DeMille Award – on, essentially, a global stage. And Dern and Poehler’s actions to bring activists very literally into the spotlight can only help to further the public’s awareness of what’s going on in our food systems. We applaud the efforts.