Fish Are Fed With Booze Waste at this Distillery/Winery/Brewery/Fishery On the Shores of Lake Erie - Modern Farmer
Environment, Food & Drink

A first-of-its-kind experiment meshes aquaculture with alco-culture. (That last one isn't a real word, but you get it.) 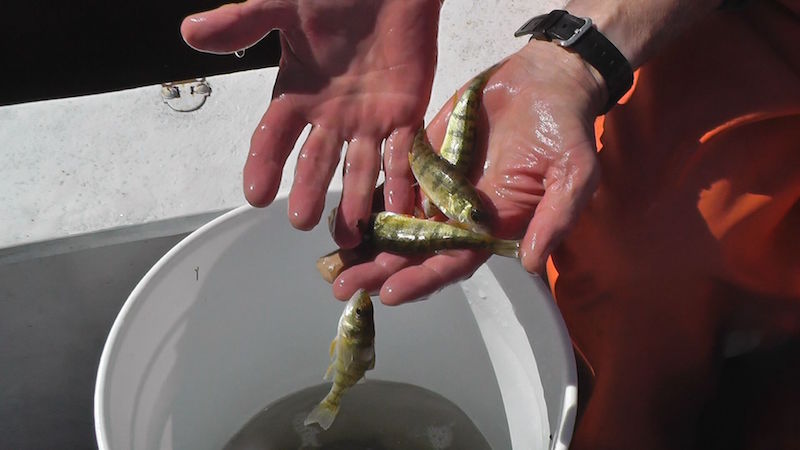 But in western New York, along the shore of Lake Erie, there’s a project unlike any we’ve seen: a fish farm attached to a combination brewery/distillery/winery in which waste from the alcohol-making process is used to feed the fish, right there on-site.

Aquaculture – a good word for fish farming – can be combined with other enterprises in a variety of ways. One simple version, called “aquaponics,” creates a closed-loop system in which – in extremely oversimplified terms – hydroponic plants suck up poop from a fish tank. The tank gets cleaned, and the plants get fed. Win-win.

This particular aquaculture system in Westfield, New York, is a collaboration between TimberFish Technologies and Five & 20 Spirits & Brewing, both based in town. “It was a natural marriage for us,” says Jere Northrop, Managing Partner at TimberFish. The facility was conceived together, and officially launched in September.

The setup works by using waste from the alcohol-making process to feed the bottom of a food-chain that will eventually feed the fish. It starts with stillage, the sugarless grain mush that’s leftover after making liquor or beer that can sometimes be used for composting or animal feed. In this case, the stillage is fed into vats full of friendly microbes that feed on the waste, breaking it down. The resulting product is then fed to larger creatures, like worms and larvae. Finally, those worms and larvae are fed to the fish.

Meanwhile, those microbes are also cleaning the water, which is then either used to house the fish or vented (with, Northrop is careful to say, strict oversight from environmental agencies) into outdoor waterways. “The system benefits from the inputs and doesn’t have any waste streams at all,” says Northrop. “No atmospheric carbon dioxide.” Eventually, waste from the fish could be used to grow crops, but for now, it’s being fed back into the microbe vats to be broken down again.

To start with, TimberFish will be growing large-mouth bass, yellow perch, and channel catfish – good fish for the cold weather – though eventually the plans are to raise higher-value fish, like salmon and arctic char.

This is the first season for fish, but by the fall of 2018, Five & 20 plans to sell their catch in their seasonal, on-site restaurant, Bird. The two companies eventually hope to sell fish in a typical retail environment – or, maybe, not so typical, given that you could well be buying your salmon fillets at a distillery.