It's CSI for sheep! A new program in England is using a unique DNA spray to help prevent livestock rustling. 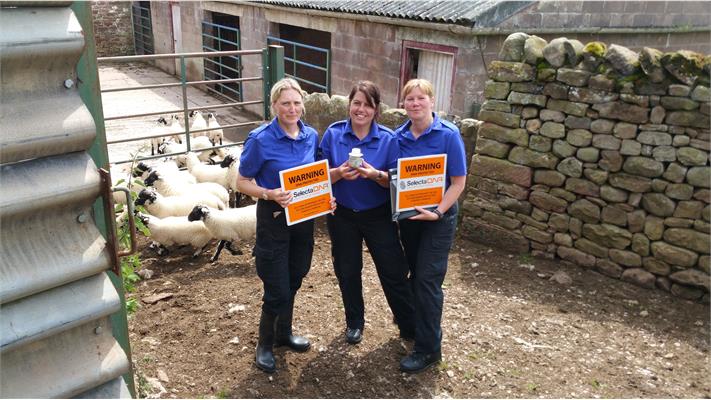 The stolen animals are sometimes slaughtered in unsanitary conditions by underground butchers and sold to unsuspecting customers, or they could end up in another flock owned by a thieving rancher.

Sheep are especially high on the list of targets, and the usual method of keeping track of the animals, which involves tagging their ears, is far from foolproof – the plastic tags are easily snipped off. Paint branding – spraying the animal on the back or side with semi-permanent paint – is another option, but also not a sure-fire preventative.

That’s why a new way of marking sheep is coming to the fore. Think of it as a biological branding technique, which can’t be altered or removed by thieves: A liquid containing a unique DNA code is applied topically to whatever you want to protect – sheep, in this case. It can’t be detected by the naked eye, is non-toxic, and can last up to five years. If needed, law enforcement officials can use an ultra violet lighting device to detect the presence of the product, and cross-reference it with a database to determine to whom the sheep belong. While this type of technology has been around for more than a decade, this is the first time it’s been used on livestock.

A 12-month pilot program in Cumbria, a rural county in England’s Lake District, between the local police and SelectDNA, the company behind the technology, is just getting underway. Participating farmers are given a kit that can be used to mark up to 100 sheep and will get continuing support during the course of the project, according to Eden Police Community Support Officer Karen Dakin.

“Notices around the farm will hopefully deter thieves, but where livestock are stolen, the markings will allow us to trace animals back to the farm. We will also be able to do spot checks, including at places like auction marts,” she said.

A crime reduction program in Manchester, England, that used the same technology to mark people’s property cut burglary by 83 percent, according to the company. Hopefully, the program can make a dent in livestock crime, as well. In the U.S., where cattle rustling has seen a resurgence in the last few years, the technology could come in handy to help stop an old-fashioned crime using a cutting-edge process.