"You can take our official Twitter, but you'll never take our free time!" 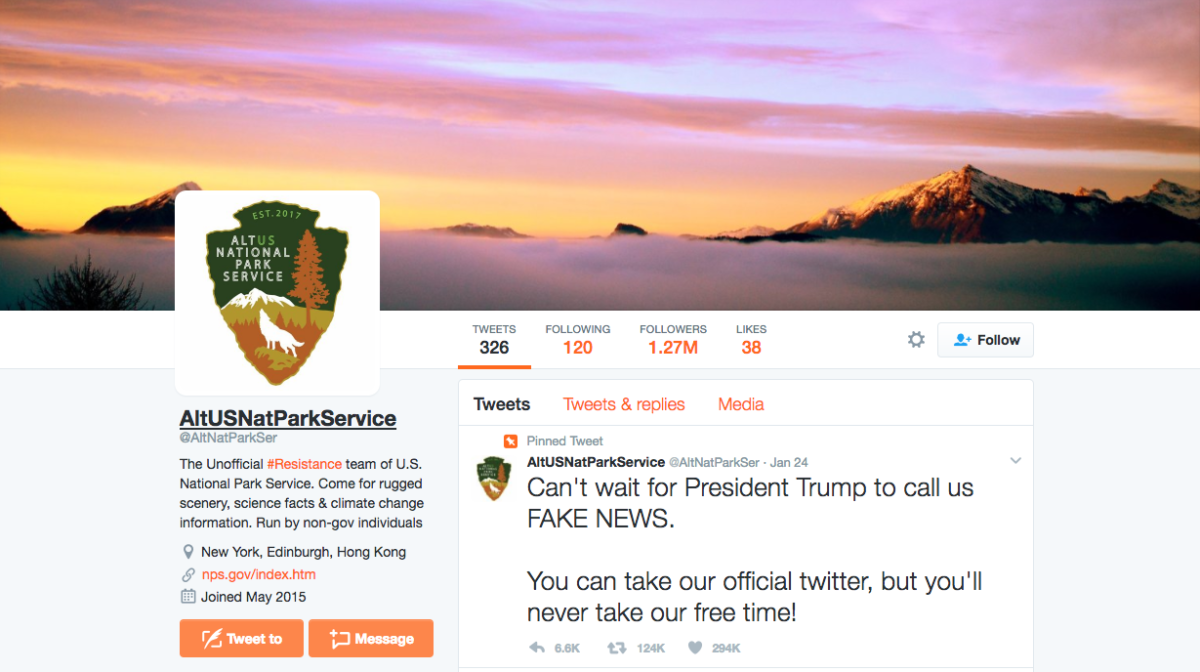 Twitter, specifically, has been a source of contention. It all started when the official National Park Service account was asked to stop tweeting after it shared photos that compared the crowd size of Trump’s inauguration to the crowd size of Obama’s inauguration in 2009. Then the official Badlands National Park Twitter went rogue and started tweeting facts about climate change. The tweets were later removed and blamed on “a former employee who was not authorized to use the park’s account.”

Since those tweets were removed, over 40 “alt” or “rogue” Twitter accounts have sprouted up to fill in for many agencies and National Parks. Some of them already have a pretty big following – currently, AltUSNatParkService has more than 1.27 million followers. So far we’re seeing climate facts, inspirational quotes about the environment, cute photos of animals, and a lot of snark (this is Twitter, after all).

So for those of you who still want to see info about climate change and the environment during this supposedly temporary crackdown, we’ve created a list of some of these accounts, especially the ones that pertain to food and agriculture. And of course, the necessary caveat: We’re not entirely sure who is running these accounts (though in the case of @AltNatParkSer, they tweeted on January 27 that “Several of us are environmental activists and two are journalists [our FACT checkers]. All of us are former scientists.)”, so we caution you to, as always, think critically about what you’re reading. If we’re missing any, feel free to let us know and we’ll update this list.

Resisting the censorship of facts and science. Truth wins in the end.

2 days without a post on our main social accounts. We would like to bring you great news about food & drugs but…

He can take our official Twitter but he’ll never take our FREEDOM. Unofficial EPA #resistance. #factsmatter

If loving science is wrong, we don't wanna be right. #factsmatter

Ungagged news, links, tips, and conversation that the U.S. Environmental Protection Agency is unable to tell you. Not directly affiliated with @EPA.

Since @realDonaldTrump is forcing a gag order on @EPA, we're going to make sure the core values of the EPA are protected.

It's not like the environment is a major determinant of health or anything like that… https://t.co/qJ4V9kCl58 https://t.co/O3Gro61S3Q

The Alt U.S. Fish Wildlife Service (AltUSFWS) is dedicated to the conservation, protection and enhancement of fish, wildlife and plants and their habitats

How we feel when we are told that science doesn't matter #ScienceNotSilence pic.twitter.com/THUvzRTHN3

Unofficial and unaffiliated resistance account by concerned scientists for humanity. Don’t forget to register for ObamaCare before Jan 31!

Did anyone try #AltCtrlDel on @POTUS, yet?

Unofficial group of science advocates. Stand up for science, rights, equality, social justice, & ultimately, for the health of humanity.

We have agreed to no longer use the NIH logo, upon their request. We'd rather be here with a diff logo than not be here at all.

Can't wait for President Trump to call us FAKE NEWS.

You can take our official twitter, but you'll never take our free time!

The unofficial, and unsanctioned, #Resistance team for the U.S. Forest Service. Not an official Forest Service account, not publicly funded, citizen run.

Read it while you can! https://t.co/rTbMl0n3Zc

The unofficial “Resistance” team of NASA. Not an official NASA account. Not managed by gov’t employees. Come for the facts, stay for the snark.

Why do we need a president who cares about climate change? This is why. https://t.co/NDijMXVFWD

The unofficial #resistance team of the National Aeronautics and Space Administration. Operated by a #UScitizen that is not affiliated with any Federal Agency.

"In space no one can hear you scream." (#Aliens 1986) …but here on #earth they can so join the #ScienceMarch and scream your lungs out.

The Unofficial “Resistance” team of the NOAA. Account not tax payer subsidized. We study the oceans, and the atmosphere to understand our planet. #MASA