This is not a good time to be an immigrant farmworker. 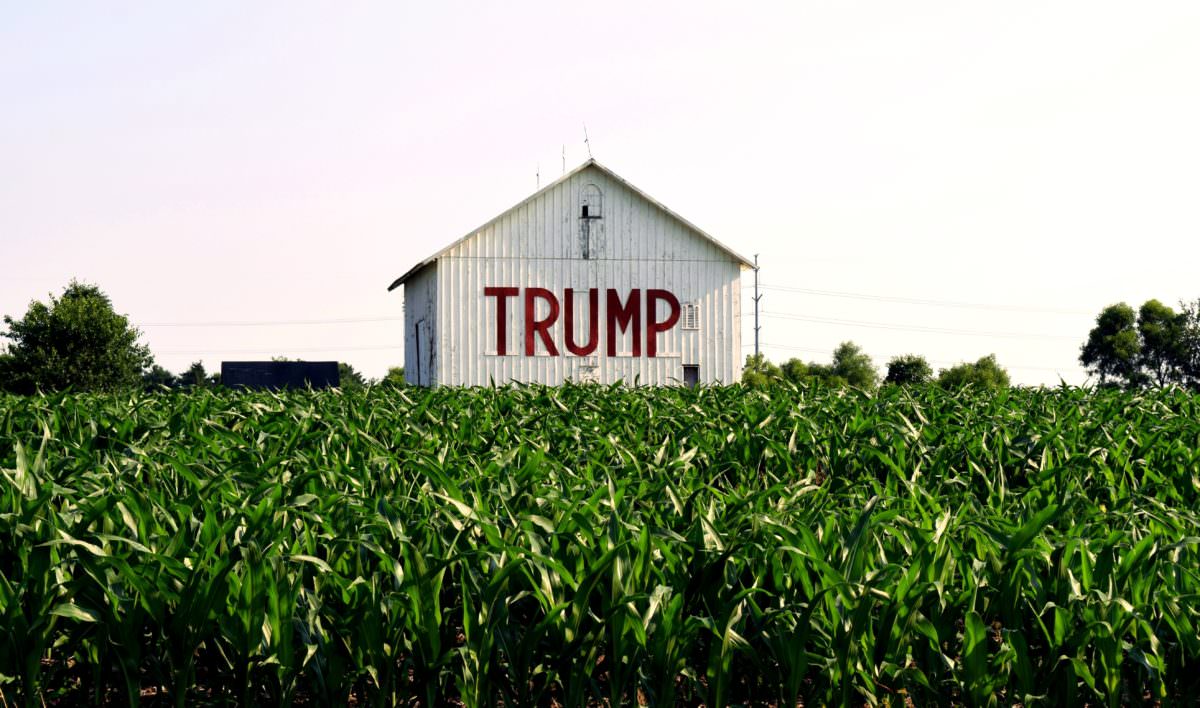 A farmer's barn in Somerset, Ohio, shows support for Trump. While the majority of rural Americans supported the Republican candidate, it might be to the detriment of the agriculture system.
Photography Christine Ruddy / Shutterstock.com
Share
Tweet
Pin
Email
5K Shares

Did Rural American Farmers Vote To Deport Their Workforce?

At the ballot box, rural Americans were unfazed by what would seem a contradictory choice: voting to remove the low-wage workers that are, arguably, the linchpin of the rural economy. Farming is a high risk, low margin business endeavor, largely propped up by government subsidies and a marginalized workforce willing to toil 80 hours a week at appallingly low rates of pay – employment conditions which few American-born citizens would accept.

Apparently rural voters were willing to overlook this inconvenient truth, or perhaps they assume that Trump will not follow through on his promises.

Trump won the vote in upwards of 90 percent of rural counties; in the 1,299 rural counties he won, he garnered 85 percent of the vote. In contrast, Hillary Clinton, who supported a path to citizenship for the nation’s estimated 11 million undocumented workers, won close to 90 percent of urban counties.

How Farmworkers Are Reacting

Unsurprisingly, millions of undocumented farmworkers are in a state of panic.

KION, a radio station in Monterrey County, California, where an estimated 55,000 undocumented workers tend to vast expanses of lettuce and strawberry fields, reported widespread concern. “I’m really scared,” said one farmworker who was interviewed. “Me and my roommate already have our truck loaded and ready to leave.”

Elsewhere in California, Latino immigrants took to the streets to voice their opposition to the president-elect. The day after the election, a group of protesters in downtown Los Angeles shouted, “Aqui estamos y no nos vamos,” or, “We are here and we are not leaving,” according to Voices of America, a US-based news service that broadcasts in 45 languages. “I’m afraid for my family… our friends and for my coworkers,” said one protester. “Our status and our way of life in this country are in limbo,” said another.

But Is It Possible?

Many immigration experts have said Trump’s mass deportation plan is implausible, and would likely be ineffective at reversing the tide of immigrants from south of the border. The Trump campaign has even acknowledged that his initial statements on deportation may have been more bluster than substance. More likely than rounding up all 11 million illegal immigrants, is that Trump would reverse DACA (Deferred Action for Childhood Arrivals), President Obama’s executive order, which granted legal status – and a work permit – to immigrants who entered the country illegally prior to their 16th birthday.

The paper trail associated with DACA workers would make them easy targets for deportation, compared to the millions of undocumented workers hiding in the shadows.

Over 1 million young illegal immigrants, the vast majority from Mexico, have been approved for DACA benefits since the program began in 2012. DACA does not provide a path to citizenship, but was intended as an interim reprieve while democrat and republican members of Congress battled over immigration reform, a battle which pro-reform democrats ultimately lost. Because DACA is an executive order, which means it did not require congressional approval to be enacted, President-elect Trump could overturn it on his first day in office without recourse – a campaign promise that he has not backed down from. The paper trail associated with DACA workers would make them easy targets for deportation, compared to the millions of undocumented workers hiding in the shadows.

Not that there won’t be intense political pressure from a coalition of immigrant rights groups to soften Trump’s anti-immigrant stance. The United Farm Workers, a Latino agricultural union based in California, which also advocates nationally on behalf of immigrant farm workers, will no doubt be one of those, leveraging its deep ties in Washington – UFW worked closely with the Obama administration and Clinton campaign on immigration reform – to block the president-elect’s deportation efforts.

What Does the UFW Think?

In an emailed statement to Modern Farmer on the day after the election, Arturo Rodriguez, who took over as UFW president following the death of founder Cesar Chavez in 1993, said:

“Making progress will be more difficult, but our practice of organizing for the long term will let us continue to win justice… We reaffirm our confidence in the American people and in our Si Se Puede! attitude… As the challenges increase so does our commitment and determination to afford all farm workers and low-income working families the opportunities and respect they deserve.”

Rodriguez, who also spoke with us just prior to the election about his hopes for the next president, did note one bright spot on the night of Novermber 8th: Joe Arpaio, the sheriff of Maricopa County, Arizona (where Phoenix is located), who is known for his unrelenting persecution of Mexican immigrants, was not re-elected. He was seeking his seventh term. Recently referred to as the Donald Trump of Arizona, Arpaio has long been loathed by immigrant activists and progressive Americans alike as a symbol of xenophobic sentiment within the American political and law enforcement system.

“We have confronted and overcome political adversity many times before,” said Rodriguez in his statement. “What remains unchanged is faith in our history and practice of organizing for the long term, running the race as a marathon and not just as a sprint. That faith will allow us to continue to win justice.” May it be so.