Breeding a Better Chicken in the Name of Art (and Science)

For 20 years, Belgian artist Koen Vanmechelen has been selectively breeding chickens for his Cosmopolitan Chicken Project. 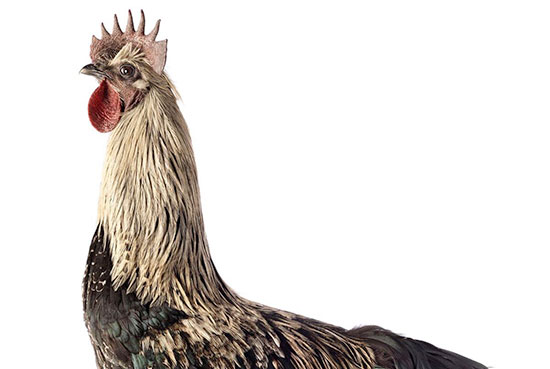 For the last 20 years, Belgian artist Koen Vanmechelen has been selectively breeding chickens from around the world as part of his Cosmopolitan Chicken Project. What started as a way to illustrate metaphorical ideas about diversity and multiculturalism has led to the creation of a bird that, according to the artist and backed by the scientists working on the project with him, tends to be healthier, live longer, and be more adaptable to a changing environment than purebred chickens.

Vanmechelen has always had an affinity for chickens and began raising them as a child. But more than that, he has been obsessed with the way in which this bird – descended from the Asian red junglefowl – is so intertwined with humanity, not just because of its value as a food source, but also culturally. He says there are certain chicken breeds that can be seen as a representation of a nation’s culture, and gives the Poulet de Bresse from France, as an example. “The bird has red in the head, white in the body, and blue in the legs. It’s the French flag!” he says.

Vanmechelen launched the Cosmopolitan Chicken Project in 1996 when he began breeding his first hybrid, the Mechelse Bresse, a cross between the Belgian species Mechelse Koekoek and the French Poulet de Bresse. The bird was presented at a gallery on the border between France and Belgium three years later. Vanmechelen realized he was on to something and formed a foundation made up of experts in various fields, such as biology and genetics, including the geneticist Jean-Jacques Cassiman to collaborate on the project and study the birds. He typically breeds about a hundred of each generation and keeps some of his more than 3,ooo birds on a 25-acre farm near Meeuwen, Belgium, and the rest are scattered on various farms across the globe.

“Start telling people a chicken is a piece of art and watch how many friends you’ll still have after that,” says Vanmechelen with a laugh, during a recent Skype interview with Modern Farmer. That’s not to say his various exhibits around the world are just a bunch of chickens hanging out in a gallery space. Nope; they also incorporate Vanmechelen’s painting, drawing, photography, video, installations, and sculptures that have been inspired by the breeding project and vice versa.

Each successive generation of the Cosmopolitan Chicken is crossbred with a chicken breed from another country, and so far has included 20 nations, including the United States, Senegal, China, and Slovenia. Vanmechelen’s latest endeavor, which he launched this year and calls the Planetary Community Chicken, is a sort of spinoff of the original project and has a more direct real-world impact. When Vanmechelen realized his chickens have many superior traits, he came up with the idea of crossbreeding his roosters with commercial hens from various communities around the world in an attempt to bring more genetic diversity – and hopefully some of the positive traits from his chickens – to birds that can suffer from various problems and diseases. The idea is to produce a chicken could benefit local farmers. “I think of the Planetary Community Chicken as a gift to the different communities to make their own chicken that is suited to their particular environment,” says Vanmechelen.

On September 22, at Wasserman Projects in Detroit, the 20th iteration of the Cosmopolitan Chicken, the Mechelse Wyandotte, will be bred with a Hendrix Genetics’ ISA Brown, a commercial laying hen engineered for industrial-scale agricultural operations as part of an exhibit at the art space. Vanmechelen and Wasserman Projects are partnering with a local nonprofit, Oakland Avenue Urban Farm, to bring the hybrids into its breeding and sales operations. The exhibit, like Vanmechelen’s others, will include a variety of art related to the project.

And yes, collectors – besides buying Vanmechelen’s paintings, sculptures, and other artistic output – also collect his chickens. He says they have to agree to certain terms, such as how much space they must provide the chickens, before they are allowed to own one.