What exactly is milk tea, and why do Hong Kongers go so nuts for it? 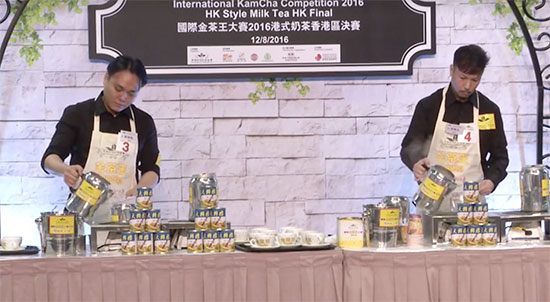 Coffee competitions can be fiery and fun; from the Barista Championships to the World Aeropress Championship, they can be raucous, loud affairs. Tea competitions tend to be a little more subtle, more delicate – unless you’re in Hong Kong. This year’s Hong Kong-style milk tea competition was captured on camera by Reuters, and man, would we like to be there.

Hong Kong-style milk tea is as fundamental a beverage to Hong Kongers as coffee is to Americans. Far from the grassy green teas or fermented black teas of mainland China, milk tea is as delicious a collision of East and West as you’re likely to find. The specific methods and materials are closely kept secrets of individual diner-like cha chaang tengs, the primary drinking establishments for milk tea, but some of the basics remain the same.

Milk tea is a blend of black teas, combined with a high proportion of either evaporated milk and sugar, or simply sweetened condensed milk. The use of concentrated milk products gives milk tea a very thick, creamy consistency, and a high sugar content makes the beverage a harder, stiffer, bolder drink than many Americans would associate with tea.

The brewing method is also unusual; instead of merely steeping, the black tea and water are simmered, sometimes multiple times, squeezing out extra flavor. That also brings out tannins, which produce a bitter flavor, but the addition of the dairy and sugar mitigate that, lending an extraordinarily strong but smooth flavor. The straining, too, is unique: sometimes Hong Kong-style milk tea is known as “silk stocking milk tea,” as the preferred strainer is a funnel of cloth. 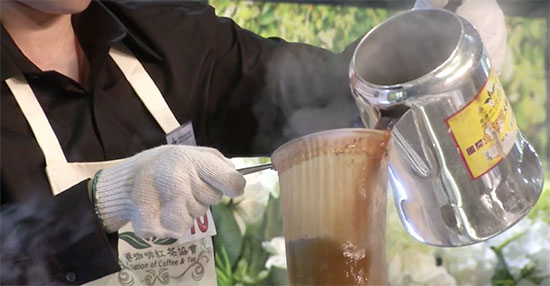 The specifics of temperature, timing, number of steeping procedures, and type and proportion of dairy and sweetener make Hong Kong milk tea as variable a beverage as any coffee beverage.

The tea itself is a blend, the contents of which is often a closely-held secret. One newish cha chaang teng owner gave The Wall Street Journal a sneak peak into his proportions. From the Journal: “As it turns out, the general formula according to his order slip consists of different parts and varieties of Sri Lankan black teas: coarse leaves and stem from Wufa, Debar and Luver teas, and the addition of baby Bopf tea leaves.” Various other sources around the internet suggest all kinds of different blends, including teas from all over the world. One post on Chowhound suggests using English breakfast, Irish breakfast, Pu-Erh, Green Jasmine, Assam, Lapsang Souchong, and even a flavored fruit tea.

A cup of milk tea brewed with all of those teas would be, very literally, the entire world in a cup. East, West, smoked, flavored, fermented, fresh, blended, single-origin. All in one cup.

Given how unique Hong Kong-style milk tea can be, and how active the process of pouring and repouring and boiling and reboiling and blending and mixing the actual brewing is, it’s no surprise that Hong Kong hosts its own milk tea competition. This year’s winner, Chen Chi-ping, has been making milk tea in his native Hong Kong for over two decades – though he doesn’t seem eager to tell anyone his winning recipe.