Just sit right back and you'll hear a tale, a tale of a guy who hopes to sail a giant pumpkin straight into the record books. 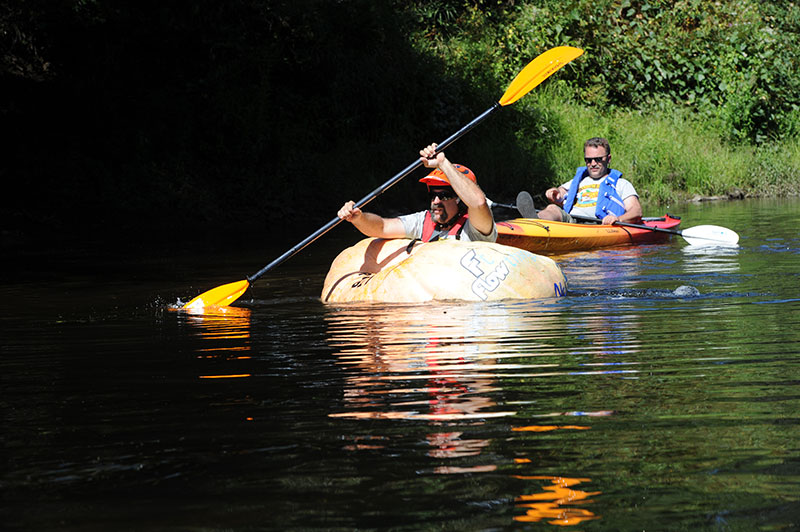 Insert your own “out of his gourd” joke here.

In fact, the kooky stunt is part of a deeper mission: Sandstrum is passionate about “getting kids out in the dirt and growing something, and to understand where food comes from,” he says. The father of two works as a consultant for Crave Food Services, an online marketplace that connects restaurant chefs with local farmers. Five years ago, Sandstrum and his wife, Genevieve, co-founded the South Shore Great Pumpkin Challenge, which distributes pumpkin seeds (the Atlantic Giant variety) to schools throughout Massachusetts. The school that grows the heaviest pumpkin wins a $1,000 grant that must be spent to further agricultural education.

Problem is, a noble mission doesn’t always make for a juicy story. Sandstrum was having trouble capturing media attention and decided he needed to stage a spectacle. (Hey, it worked on us!) And while turning giant pumpkins into seaworthy vessels is nothing new, no one had ever attempted a world-record pumpkin sail. The category – “Longest Journey in a Pumpkin Boat (paddling)” – didn’t even exist, so Sandstrum lobbied (successfully) the Guinness World Record folks to create it.

So, last September, Sandstrum made his first world-record attempt, but it proved to be riddled with problems. Shallow tide, a foot injury that Sandstrum sustained less than a week before the event, and video equipment that crapped out before he did all conspired against him. In the end, he’d traveled 3.5 miles, half the distance he’d aimed for. 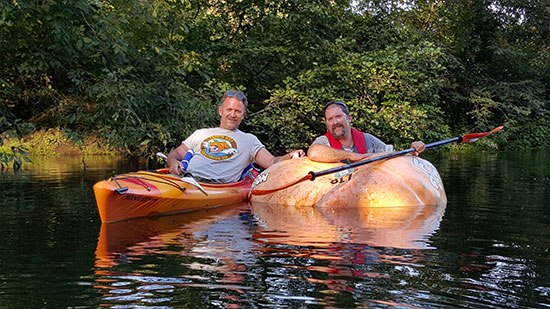 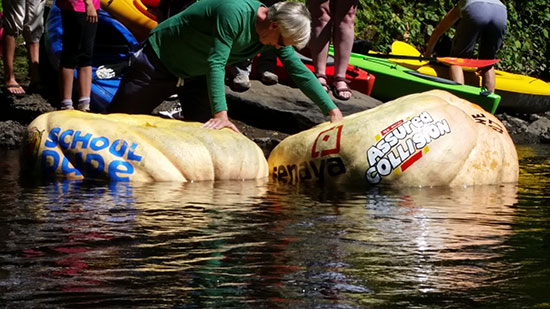 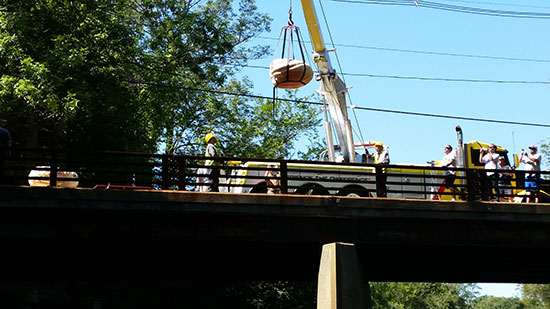 But last year was a learning curve, Sandstrum says. No more rookie mistakes.

This time, there will be complete and flawless documentation, GPS tracking, and the Massachusetts’ Assistant Commissioner for Agriculture will be on hand to complete the journal log that Guinness requires. The community has pledged its support, too: A local yacht club offered to serve a breakfast buffet, and the harbor master said he’d light the way should night fall before Sandstrum reaches his destination. (Unlikely, since he plans to launch in the morning and wrap it up in three hours, max.)

The only thing that’s not yet ready? The pumpkin. It’s still growing. Sandstrum is following the progress of a few contenders on social media and will choose two winners on August 20 during a weigh-off at the Marshfield Fair in Marshfield, Massachusetts. The largest one will become Sandstrum’s ride. “Ideally I want something around 800 pounds because then it becomes like a nice Cadillac,” he explains. “I’ve used pumpkins as small as 400 pounds, but I can’t [go eight miles] in that.” 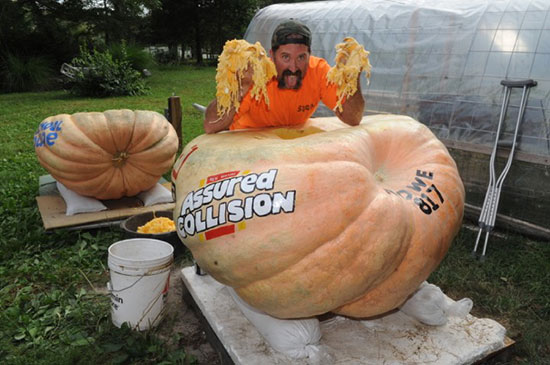 Sandstrum says scooping out all the pumpkins’ guts only takes about 20 minutes, and none of it is wasted. Courtesy Todd Sandstrum

Hollowing out one of the orange beasts requires a limbing saw, a giant spoon, and only about 20 minutes of scooping, Sandstrum says, and no part of the pumpkin is wasted: The seeds are saved for next season, chickens feast on the slimy innards (which last year weighed in at about 30 pounds), and the shell eventually hits the compost bin. The second-largest gourd will be reserved for Sandstrum’s pal Josh Peach, who’ll paddle alongside him “for moral support…and comic relief,” he says, “If he falls out, he falls out. I have to actually stay in it and go the distance.” For more info on Sandstrum’s world-record attempt, head to his website.