This Rio Restaurant Feeds the Homeless, but Soup Kitchen It Is Not - Modern Farmer
Food & Drink

This Rio Restaurant Feeds the Homeless, but Soup Kitchen It Is Not 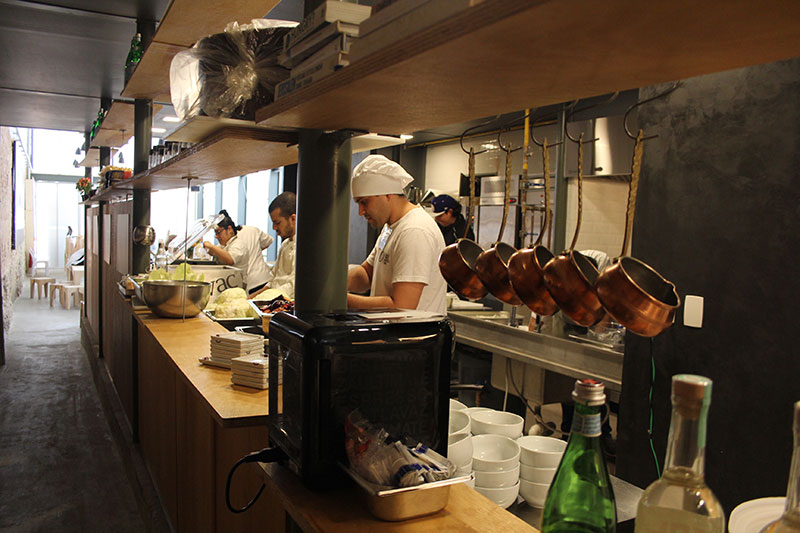 In the front of the house, volunteers wander to and fro, harried people jab their phones, and a Telemundo TV crew jockeys for a few minutes with Bottura and David Hertz, the Brazilian chef and social entrepreneur who represents the other half of the brains behind the place. Outside, a generator outside throws off diesel fumes and a hellish racket, while construction workers tear apart the sidewalk to – Bottura and Hertz desperately hope – fix some issue with the kitchen’s gas supply. It’s one of a million little problems this little restaurant has faced, but Refettorio Gastromotiva is the little restaurant that could.

“This place is a miracle,” says Cristina Reni, who works for Bottura’s Italian nonprofit, Food for Soul, which – along with Hertz’s organization, Gastromotiva and journalist Alexandra Forbes – is the force behind the restaurant. “Everyone said ‘No’ to us in the beginning.”

The basic concept behind Refettorio Gastromotiva during the 2016 Olympics is simple: feed Rio de Janeiro’s homeless population – which is estimated at 5,500 – with surplus food. We’re not talking about leftovers. This is food that would otherwise be wasted; stuff that’s ugly or bruised or approaching expiration, from sources including one of the main caterers at the Olympic Village. It’s a two-birds-with-one-stone kind of solution: There are the hungry among us, yet somewhere around one-third of the world’s food gets trashed.

Actually pulling the restaurant off, however – in the eight short months from conceptualization to grand opening on August 9 – was definitely not simple. Construction, in what was a decaying square in Rio’s Lapa neighborhood, happened in just 55 days (not counting ongoing tweaks). The frazzled vibe is understandable. Don’t even get the organizers started on the logistical wrangling – food suppliers, city hall, legal technicalities, the Rio 2016 marketing apparatus – that preceded the opening of what looks like a plain old high-concept restaurant but is actually a whole lot more. 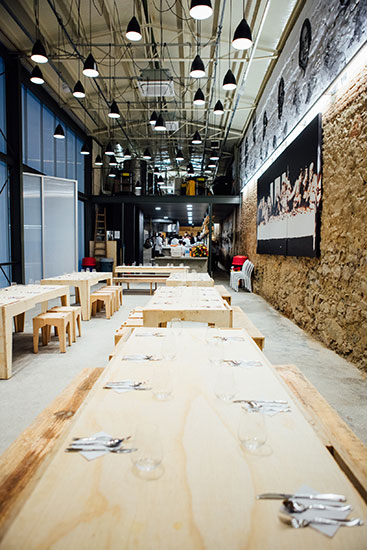 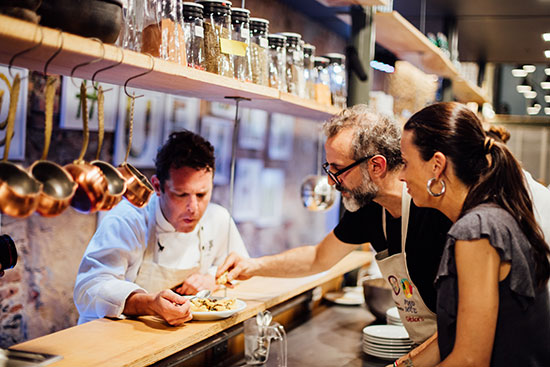 “We want to rebuild dignity,” says Bottura, who credits the influence of Pope Francis with his foray in to social justice.

That means the patrons – up to 108 of them each night, who live in Rio’s streets and shelters – are treated with table service instead of plastic trays and a chow line, there’s art hanging on the walls, and the food is prepared by a different name-brand chef each night as if they were in their own restaurants. For tonight’s main course, Jorge Vallejo from Mexico City’s Quintonil is working up a light molé. The kitchen staff working under the guest chefs are students in the vocational training program offered by Gastromotiva. In 2015 during the World’s Fair, Bottura ran a similar project, Refettorio Ambrosiano, in an abandoned theater on the outskirts of Milan where a rotating cast of chefs turned surplus food from an expo grocery store into meals for the needy. One of the participating chefs was Hertz, who called Bottura up last December and talked him into partnering on something similar in Rio.

Hertz’s ambitions for Refettorio Gastromotiva stretch well beyond the Olympics’ closing ceremony on August 21. After the world moves on to other things, the communal kitchen and school (Hertz’s mouthful of a term) get drawn into Gastromotiva’s larger “social-gastronomic movement.” Its core is the program’s four-month training program, offered for free to students from poor communities in several Brazilian cities, and it’s designed to develop new technical kitchen skills, self-esteem, and general life prospects that may otherwise have seemed out of reach. About 2,500 people have graduated since Hertz founded the program in 2007. 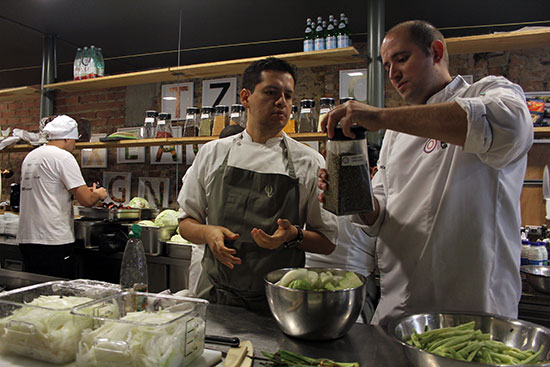 Chef Jorge Vallejo (center), from Mexico City’s Quintonil, preps for a Saturday evening dinner at Refettorio Gastromotiva in Rio de Janeiro. Chefs like Vallejo are coming from all over the world to cook meals for the homeless at the restaurant, using surplus food from several sources in Rio de Janeiro. Andrew Jenner

After the Olympics, Gastromotiva will keep the Rio restaurant open, using it as a new training facility for its students. They’ll serve lunch to paying customers at lunchtime; they’ll use that money to underwrite free dinners – made with surplus food – for the same needy patrons who are eating there during the Olympics.

“This is social change through food,” says Hertz, whose ideas have landed him recognitions like a TED fellowship and a Young Global Leader nod from the World Economic Forum.

When people talk about Olympic legacy projects, it’s usually about subway lines and stadiums and bobsled chutes and other things unlikely to deliver much material benefit to the neediest residents of the Olympic cities. If all goes as planned, Refettorio Gastromotiva will be Rio 2016’s salt of the earth legacy, where the hungry find food and the young staff discover new horizons.

There is precedent. The restaurant that Bottura et. al set up in Milan is still open, managed by a new community organization that hosts events and puts out free food for those who need it with surplus from a grocery store.

The afternoon is wearing on. Hertz looks at his phone in despair. New problems are flaring up. Pulling off a visionary, innovative concept like Refettorio Gastormotiva isn’t all that glamorous down in the trenches. Hertz says he’s exhausted., but he says he loves what he does.

The generator outside kicks it up a notch. The gas-repair project does not appear to be finished. Tonight’s guests arrive in a few short hours. Hertz fades off into the bustle. There is much yet to be done.