Flowers grown in the United States are fresher and subject to stricter labor and environmental laws. So why do imported blooms dominate the domestic market? 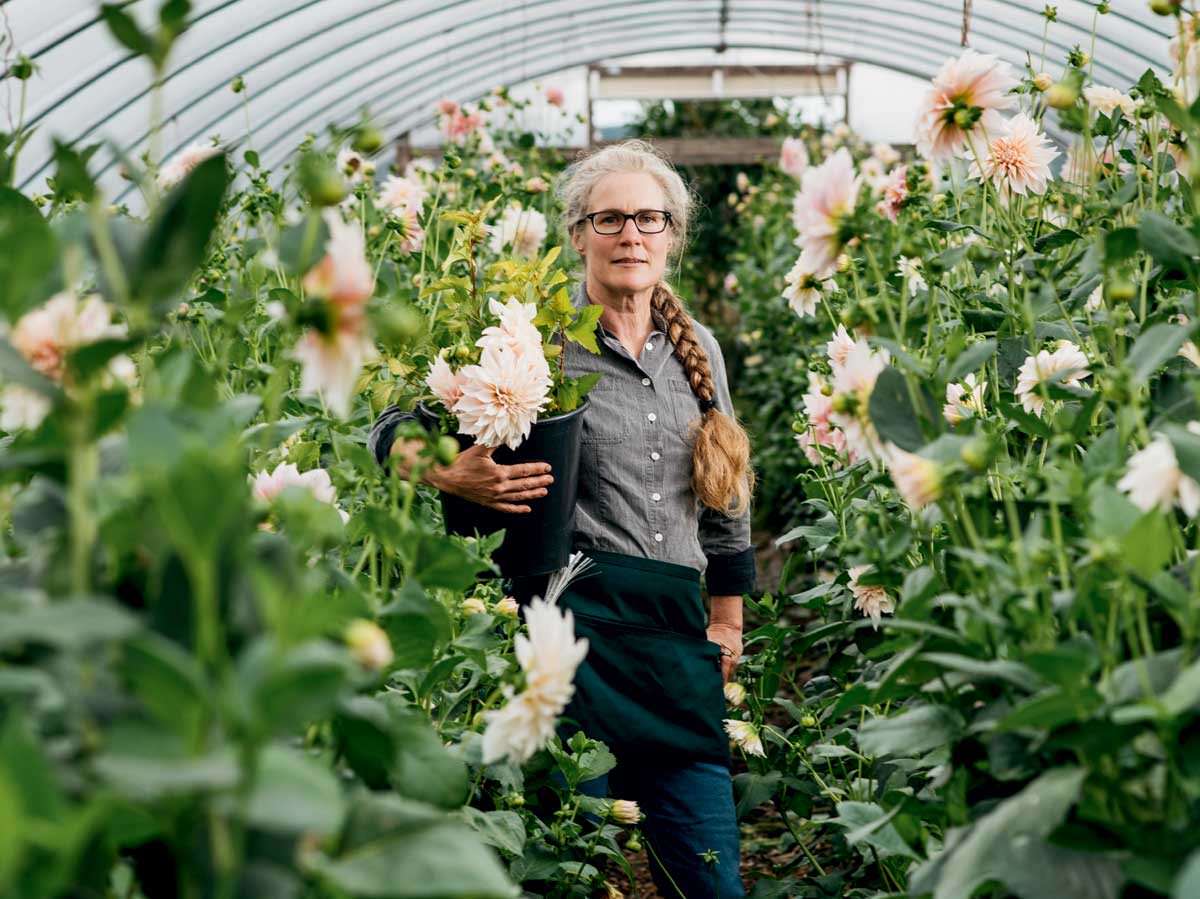 Diane Szukovathy, a flower farmer in Washington State's Skagit Valley, chairs the board of the Seattle Wholesale Growers Market, which was launched in 2011.
Share
Tweet
Pin
Email
22K Shares

The Seattle Wholesale Growers Market qualifies as an oddity for more than just its gritty locale. While domestically grown blooms account for an average of just 20 percent of cut flowers sold in the United States, every stem this warehouse stocks originated on a family farm in Oregon, Washington, California, or Alaska. The aforementioned hellebores? They were harvested by the market’s board chair, Diane Szukovathy, at her Jello Mold Farm in nearby Mount Vernon. Launched in 2011 by a dozen farmers in the region, the cooperatively owned market epitomizes an emerging movement to put American-grown flowers back on the nation’s tables. 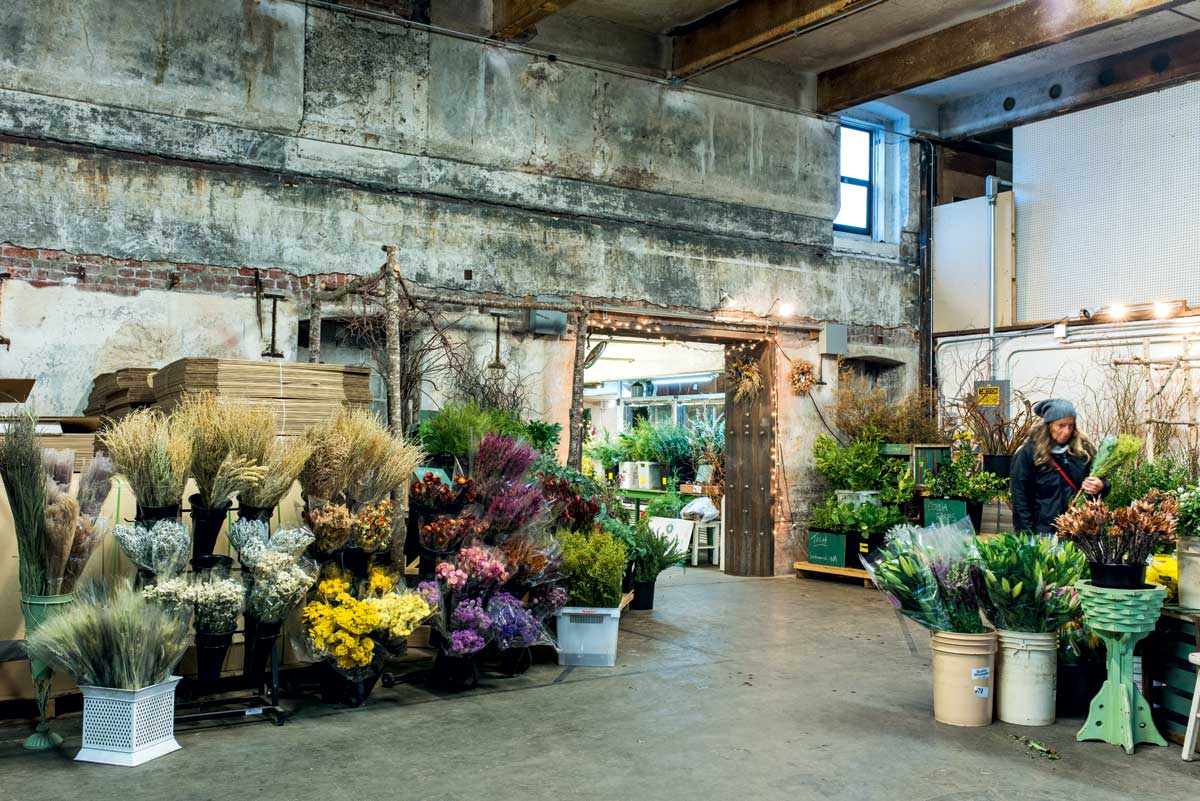 This country’s flower farmers didn’t always occupy such a tough spot. In 1991, domestic blossoms accounted for 64 percent of the nation’s flower sales. That was also the year that the United States entered into the Andean Trade Preference Agreement (ATPA), which eliminated tariffs on a number of products from Bolivia, Colombia, Ecuador, and Peru. Part of the War on Drugs, the pact had among its goals persuading South American farmers to cultivate flowers instead of the coca that ends up as cocaine. Colombia, in particular, quickly flooded the American market with cheap, duty-free cut flowers, devastating the U.S. industry, especially in California, which supplied 75 percent of the nation’s cut flowers before the passage of the ATPA. Once home to more than 500 flower farmers, the state claims just 200 today. Colombia is now the source of 78 percent of cut-flower imports to this country. An additional 15 percent come from Ecuador, with Africa, China, and Europe making up the difference. “I think we got traded away,” says Szukovathy, of the 1991 trade agreement. 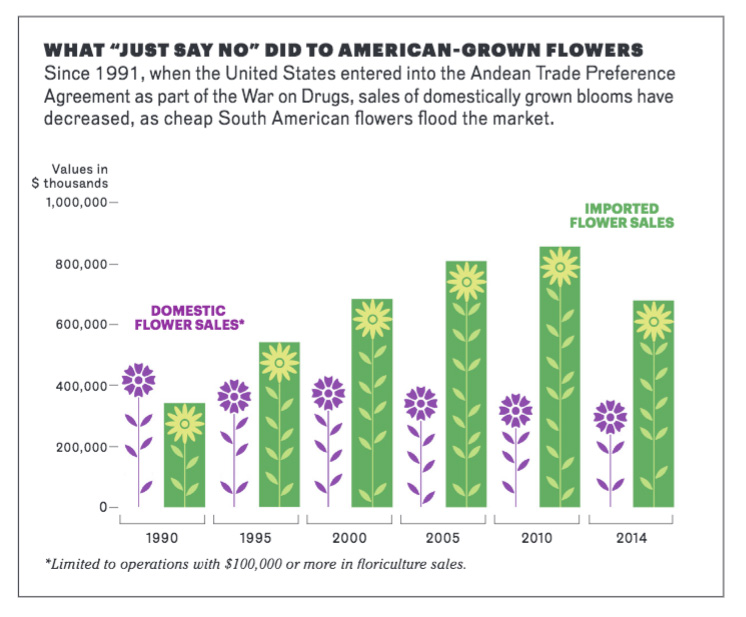 Items imported from abroad are not required to meet the same labor and environmental standards as those grown domestically. The flowers in your typical supermarket bouquet, in other words, were likely tended by underpaid laborers exposed to harmful pesticides, preserved with chemicals, and cut days or even weeks earlier.

Finally, in 2013, a group of flower farmers led by Kasey Cronquist, the chief executive of the California Cut Flower Commission, established a “Certified American Grown” task force and commissioned a survey about the industry. Among the findings: 74 percent of consumers had no idea where their flowers came from, and more than half reported they would prefer to buy local blooms. A year later, Cronquist’s group partnered with Made In USA Certified, Inc.,an independent agency that verifies the source of all kinds of products, to establish an identification system. Certified American Grown labels – ensuring that flowers and foliage have been grown, and bouquets assembled, in the United States – began appearing on the sleeves of plastic bouquets in Safeway, Whole Foods, and Trader Joe’s stores in 2014. Ken Tirpak, director of the floral department at Oklahoma’s Reasor’s Foods, says that sales of one of the chain’s most popular bouquets shot up 30 percent after its stores began carrying the logo.

“The label is a way for sellers to differentiate themselves from the competition,” says Debra Prinzing, the Seattle-based author of The 50-Mile Bouquet: Seasonal, Local, and Sustainable Flowers. Prinzing, who is widely credited with helping to spark the American-grown flower movement, launched slowflowers.com in 2014 to connect consumers to farmers, florists, and grocery stores offering domestic blooms. Given the strict labor and environmental regulations in the United States, flower farmers here can’t possibly compete on price alone, says Prinzing. 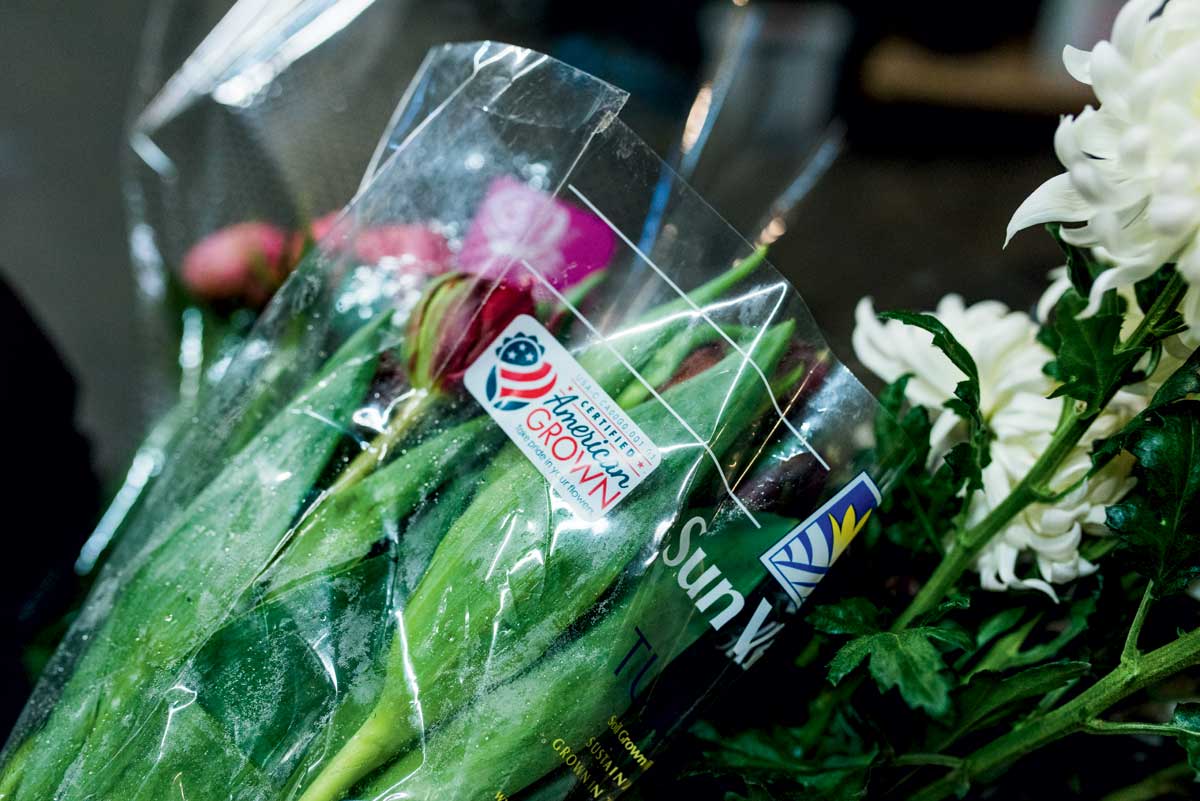 Since 2014, American Grown labels have been certifying that flowers originated and bouquets were assembled in the United States.

Many farmers, along with wholesalers and florists, are looking beyond labeling, to other avenues for raising awareness and reclaiming market share. In Wisconsin, eight growers joined forces to form the Fair Field Flowers cooperative, which uses an 85-square-foot truck to deliver online orders to buyers in the Madison area.

And last year, Certified American Grown and slowflowers.com hosted a series of “field-to-vase” dinners on flower farms across the country. “People put food on a pedestal,” explains Prinzing. “I felt that we needed to make some room on that pedestal for flowers, too.”

At each dinner, a florist designed tabletop bouquets and a chef prepared a meal featuring food and flowers sourced from local farms. June saw 105 diners gathered inside a greenhouse at California’s Pajarosa Farms, one of the nation’s last remaining rose farms. Guests at the dinner learned that while the majority of the roses sold domestically in 1991 had been grown in this country, today less than 2 percent originate here. (In 2014, more roses – some 1.6 billion stems – were imported to the United States than any other cut flower.) 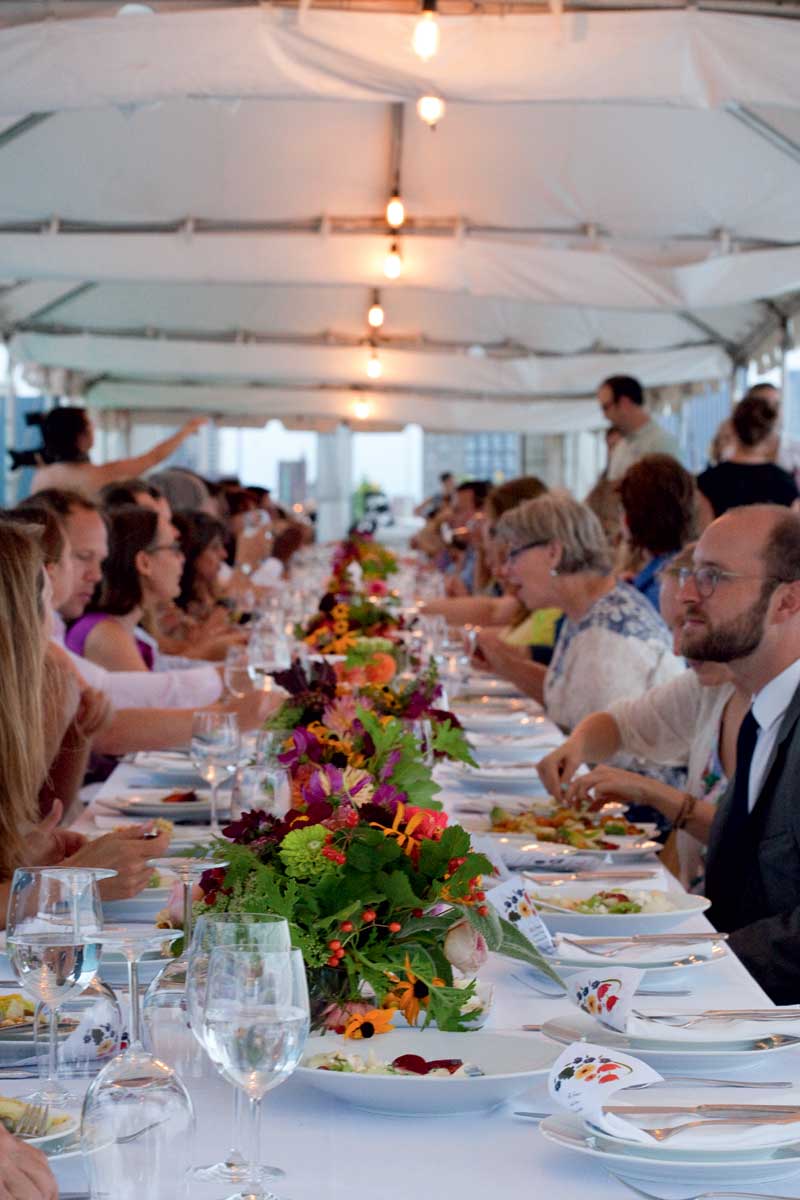 Guests at a “field-to-vase” dinner held last summer at the rooftop farm Brooklyn Grange enjoyed flowers and food grown nearby. 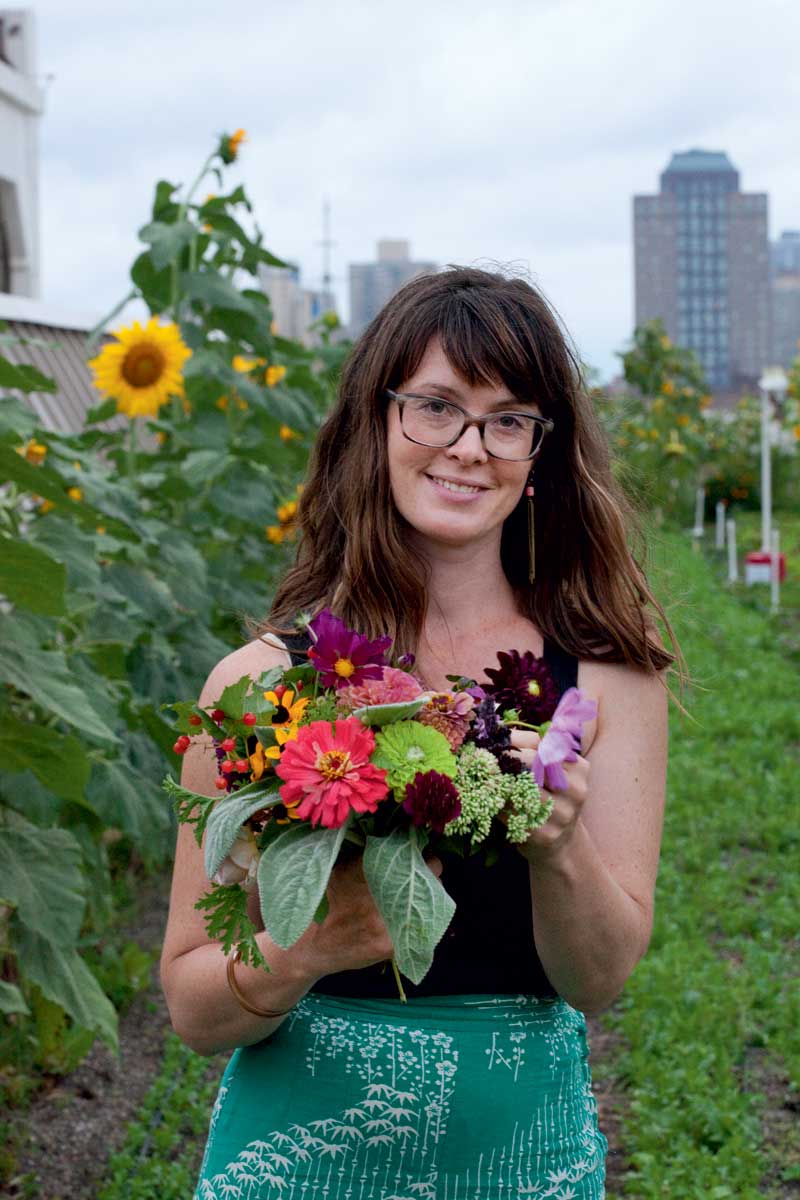 Consumers, too, seem to have a greater awareness of the implications of imported blooms. Last year, the Seattle market grossed roughly two times more than it had its first year in business – with 2015 sales close to a million dollars.

At the same time, domestic farms are finding that flowers in the field can benefit the bottom line. Cronquist, who in addition to his California post serves as the administrator of Certified American Grown, cites a 2014 U.S. Department of Agriculture report that found floriculture among the most profitable crops for farms with 10 acres or fewer.

“Cut flowers command high value in the marketplace due to their relative rarity and luxury status,” agrees Molly Culver, a Brooklyn-based urban farmer and floral designer. Four years ago, Culver began cultivating flowers in addition to the produce she grows at The Youth Farm – among the first in the country with CSA subscriptions offering flowers as well as vegetables. “For the last four to five years, I’ve watched vegetable growers move to planting flowers,” says Culver. “They’re seeing the popularity and the profitability.”

Indeed, the number of farms with sales from cut flowers in the country increased almost 20 percent between 2007 and 2012, according to the USDA. Culver credits the increased awareness to media coverage about the parallels between the local food and flower movements and to a handful of popular local flower”“themed Instagram and Pinterest accounts. In just the last 12 months, she says, requests for flowers grown at The Youth Farm have tripled.

Prinzing has also noticed the trend: “We’re seeing a renaissance of flower farming,” she says with pride, “small and large, across the United States.”

To find florists who use only Certified American Grown flowers, visit slowflowers.com. For information about upcoming “field-to-vase” dinners, go to americangrownflowers.org.

There’s no better way to create a good neighborhoods than luscious flowers, bushes and trees – in pots and in the earth – around a house and in the yard. People love it; you will get to know new friends. Try it and see! God bless Lady Bird Johnson – What a forward thinker she was!