Meet Kimberly Zabec, our newest winner in our #iamamodernfarmer contest. 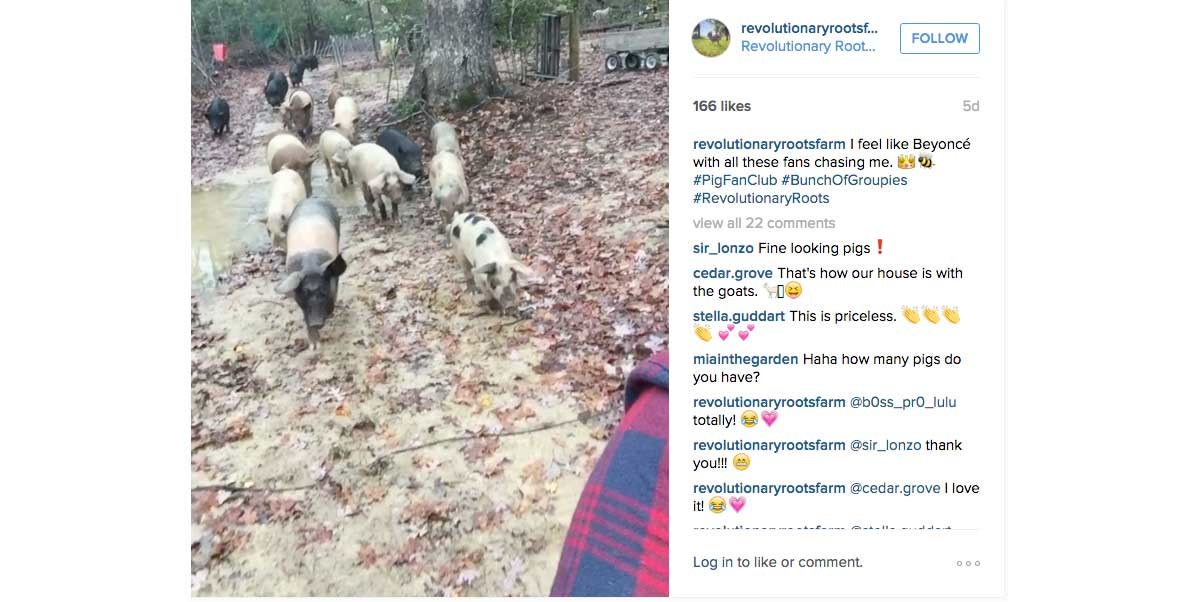 The couple made the leap to full-fledge farming after seeing a Craigslist ad for land in Kinsale, Virginia. The acreage there was so much cheaper than in Maryland that at first they couldn’t believe it wasn’t some sort of scam. Now the couple, who have known each other since they were six years old, are homesteading on 20 acres, which they call Revolutionary Roots Farm. They’ve cleared the raw land, put in a well and fencing, and today have 40 hogs free ranging on the property. They also raise chickens, ducks, turkeys, rabbits, Guinea fowl, geese, and goats.

Modern Farmer: Why do you consider yourself a modern farmer?

Kimberly Zabec: One thing that we do that I feel is “modern” is our ability to make our own feed. We make non-GMO swine and poultry feed. We get the ingredients, measure, and mix ourselves. We actually see everything that is going into our animals from start to finish.

MF: Why is it important to you to support local agriculture?

KZ: For me personally, I just love the interaction and knowing the person behind the food that you’re consuming. Not to mention the fact that a dollar goes further in the hands of a small-time farmer than it does going into the hands of one of these big corporations.

MF: If you could grow or raise any food or animal, what would it be and why?

KZ: This is an ultimate dream and I don’t know if it will ever happen, but I would love to raise bison. Being part Native American, I imagine it would make me feel closer to my roots. My husband also wants to get into lamb in the future.

MF: What’s your favorite vegetable? Why?

KZ: I’ll admit, I’m still a picky eater. I try not to be, but there are just some things you like and some you don’t! My favorite vegetable would have to be asparagus. But made by my husband. He won’t admit it, but he’s pretty much a chef.

MF: If you could give other modern farmers any advice, what would it be?

KZ: My advice would be to laugh when things get hard. There have been days where everything goes wrong and you feel like giving up. But I promise you it gets better. We knew absolutely nothing about farming when we started. We still don’t know a lot! It’s about taking things as they come and learning from it. Having a good partner to laugh with isn’t bad either.

MF: Do you have a farming/agricultural hero? Why do you admire them?

KZ: I would have to say one of the locals in Kinsale, [Virginia]. His name is Robert Gawen. He runs an excavation company as well as farm[s] thousands of acres. He befriended us and has helped us out tremendously with getting our operation up and running. There’s nothing like southern hospitality.

Want a chance at an interview with Modern Farmer and other cool prizes? Just post a picture or a video on Twitter and/or Instagram with the hashtag #iamamodernfarmer and you’ll be entered for a chance to win. Every week, we’ll choose one winner to be profiled onModernFarmer.com. Every month, one of the weekly winners will be picked to win $100 inModern Farmer swag. One of the monthly winners will also win the grand prize: A VIP trip for two to the Farm Aid 2016 concert!

Added bonus: If you purchase an “I am a modern farmer” t-shirt, you’ll stand in solidarity with the hardworking men and women who produce our food. You certainly don’t have to don the shirt to post and have a chance to win, but with sales of these tees, Modern Farmer supports independent farmers with a donation to Farm Aid.

Need inspiration? Check out all the #iamamodernfarmer posts from across the country – and around the world!

Related
Plants
Why We Need to Adopt More Orphan CropsShea Swenson
Animals, MTMF
Meet the Gay Goat Guys, a Modern Couple Committed to Putting Animals...Emily Baron Cadloff
Environment, Opinion, Politics
Opinion: With Sky-High Fertilizer Prices, There’s an Opportunity to Grow Crops More...Kathleen Merrigan
How-To, Water
Rainwater Harvesting Tips for BeginnersEmily Baron Cadloff
We use cookies on our website to give you the most relevant experience by remembering your preferences and repeat visits. By clicking “Accept”, you consent to the use of ALL the cookies.
Cookie settings ACCEPT
Privacy & Cookies Policy