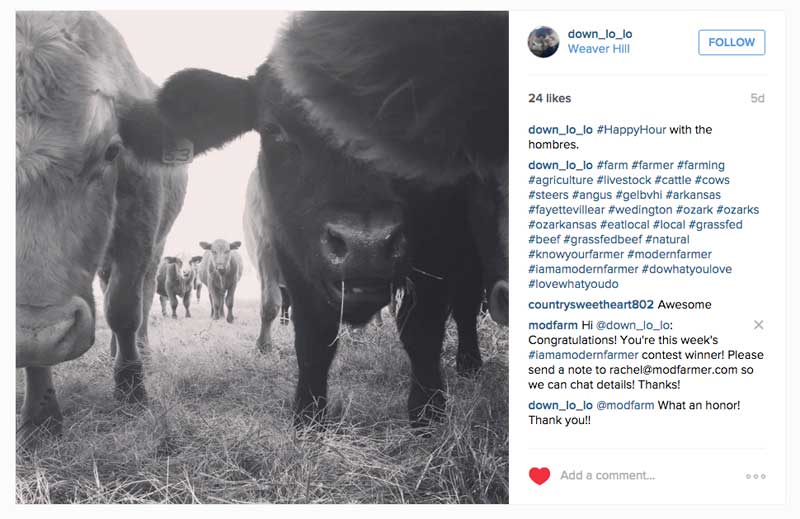 But after losing her job at the law firm she made the decision to pursue a Masters of Law in food and agriculture at University of Arkansas School of Law, where she’s an adjunct professor. She also began writing for AgFunderNews, a website about technology in the agricultural sector, and became an apprentice at Ozark Pasture Beef (OPB). Now, she’s days away from finishing her first semester in the program and very happy with the choices she’s made.

“I can’t say I’m a farmer, but I’m certainly a new student of the trade. I’m like the newborn calf wandering around the pasture experiencing the world for the first time,” she tells Modern Farmer in an email.

As an apprentice at OPB, Manning is getting hands-on training at a grass-fed beef operation. She says she felt that if she was going to “talk the talk” about policy, advise farmers, or make recommendations on ag issues she needed to “walk the walk” first. She went on a farm tour of OPB, met one of the operation’s partners, and was soon working there. “The joke is that I came out to the farm and never left,” she says.

Modern Farmer: Why do you consider yourself a modern farmer?

Lauren Manning: I didn’t grow up on a farm, I don’t have any farmers in my immediate family, and I’ve never lived in a rural area. I used to think that I needed to check off one of those boxes to even consider becoming a farmer, but I think that notion is waning. With the average age of farmers steadily increasing, we need to incentivize people to join the industry and get involved in farming and agriculture. In the past, children often left the farm to seek non-agricultural careers in cities and urban areas. I think we are going to start seeing some people doing just the opposite. There’s this antiquated, dusty black-and-white photograph image that has characterized farming for quite some time. I think, or hope, that sentiment is fading and that people are starting to see it as a really rewarding and enjoyable career path, hobby, or full-on lifestyle. Truly farming is a public service, and if we don’t have men and women willing to take on that role, we are going to be in trouble. I recently started interning with the National Young Farmers Coalition to learn more about the specific issues that impact young farmers, or keep people interested in farming from making the transition. They do critical work.

Truly farming is a public service, and if we don’t have men and women willing to take on that role, we are going to be in trouble.

I think the term “modern farmer” means that the prototypical notion of who farmers are is evolving. There are people from all different walks of life joining the industry along with so many new ways to produce food. I also think that many long-term or intergenerational farmers are modern farmers in a way. Agriculture is one industry where we’ve never stopped modernizing or innovating. Farmers are some of the most creative and inventive people. You may see an older farmer in overalls driving a truck and have some assumptions about who that person is or how he or she farms, but just wait until you see him or her whip out an iPad and start talking about drone-assisted field mapping, real-time cloud-based agronomic analysis, or bioagriculture crop inputs. Working with AgFunder has given me a glimpse of what modern farming may look like in the future, and it’s pretty cool.

MF: Why is it important to you to support local agriculture?

LM: Working with OPB has fundamentally changed the way I think about food and the basic act of eating. I’ve been given a front-row seat to the entire process – from birth to death. Cows are incredible animals and there are a few on the farm that I’ve become really fond of, even though I know their ultimate fate. Knowing a cow and knowing that it will eventually be slaughtered to provide food forced me to assess where I stand on consuming meat, ask myself some questions, do some research, and decide what type of meat I was comfortable consuming. By type, I mean the way the animal was raised and handled. One of the common questions people ask me about apprenticing is whether I have a hard time becoming attached to animals whose fate is certain. I recently read an old blog post by Elizabeth Vandeventer of Davis Creek Farms called “The Animal Lover’s Dilemma” that did a better job than I could of explaining what I’ve felt on that subject. At the end, she says, “Once again, surrounded by nature, I see life fold into death and death fold back into life and I no longer fear it. I’m simply grateful to be a conscious part of it.”

It also really underscored the gravity and cost of food waste. I distinctly remember a time when I was very young and I refused to finish my dinner. I was going to throw my plate away, but my father told me that an animal had died for that meal and to throw my entire plate away was disrespectful. That’s definitely stuck with me, but it wasn’t until I started apprenticing at OPB and working with livestock that it really came full circle. I’ve always felt like I have some duty to care about how livestock are raised as a consumer. Now, I add reverence to that list, too. I have so much respect for these animals and respect for what it means to eat meat in our modern food system. OPB uses rotational grazing. I’ve seen the high quality of life it provides for the animals and how beneficial it is for the environment as a whole. They also use low-stress handling methods. We can call the cows and they follow us into new pasture. They are so gentle you can walk right up to them and touch them. That’s not always the case with cattle.

So, based on my personal experience, I think we ought to support local food because it gives people a chance to learn more about every phase of food production and to acknowledge all it’s intricacies. And while everyone is entitled to his or her own philosophy, I think people ought to take an interest in what they eat. It’s similar to voting. We all prefer an educated voter. I don’t think it should be different when it comes to encouraging “educated eaters.” Make whatever decision you want about your food, but educate yourself before you do. And don’t just read the things or talk to the people that are going to tell you want you want to hear. Getting involved with local food here in Northwest Arkansas has certainly changed my perspectives for the better.

MF: If you could grow or raise any food or animal, what would it be and why?

LM: Cows. They just put a smile on my face. I’m learning so much about rotational grazing at OPB, and I’m witnessing firsthand how incredible it is. It not only provides a good quality of life for the cattle, it also keeps the soil and land healthy, provides habitat for other species, and preserves open space. Llamas and alpacas have always intrigued me, and I’ve thought about raising farm dogs, too.

MF: If you could give other modern farmers any advice, what would it be?

LM: I’m so new to this that I hardly feel qualified to give advice. Instead, here are five truisms I’ve learned so far:

MF: Do you have a farming/agricultural hero? Why do you admire them?

LM: Ron Morrow and Ann Wells, the partners I work with at OPB. Since the very first day I walked onto their farm, they’ve treated me like family and answered my never-ending questions. They just know so much and have such an incredible intuition about everything – the weather, the animals, all of it. The way they care for their livestock and land is incredible. Their sense of dedication and responsibility are inspiring, and they take pride in what they do and the food they provide to the community. Perhaps most importantly, they’ve shown me incredible patience. Farming has a steep learning curve. They’ve made so much time for me and go out of their way to make sure that I’m learning and experiencing new things. It took me two weeks to master tying the knot we use to set up rotational grazing paddocks, and while Ron may have given me a few well-deserved jabs, he didn’t stop teaching me until I got it. I told Ann I was interested in direct marketing, and she’s let me do everything from work the farmers market to dabbling with the farm’s website and social media accounts. They’ve included me in literally every aspect of the business. Thanks to them, I have a completely different view about my masters, my potential career path, and agriculture in general.

If there’s one thing I’ve learned so far, it’s that farmers will always help you. Always.

While having my own farm one day is a definite dream, it’s incredibly intimidating and I’ve often doubted whether I have what it takes. They’re giving me a chance to prove myself wrong. And, wherever I may go, I know they’re only a phone call or text message away. I feel like they are my “farming parents.” I used to think that you had to know everything in order to be a farmer, but I don’t think that’s true anymore. It’s impossible to know everything. As long as you have some good mentors like Ann and Ron in your corner, you’ll be okay. If there’s one thing I’ve learned so far, it’s that farmers will always help you. Always. Can’t say I’ve come across a more collegial profession.

Want a chance at an interview with Modern Farmer and other cool prizes? Just post a picture or a video on Twitter and/or Instagram with the hashtag #iamamodernfarmer and you’ll be entered for a chance to win. Every week, we’ll choose one winner to be profiled onModernFarmer.com. Every month, one of the weekly winners will be picked to win $100 in Modern Farmer swag. One of the monthly winners will also win the grand prize: A VIP trip for two to the Farm Aid 2016 concert!

Added bonus: If you purchase an “I am a modern farmer” t-shirt, you’ll stand in solidarity with the hardworking men and women who produce our food. You certainly don’t have to don the shirt to post and have a chance to win, but with sales of these tees, Modern Farmer supports independent farmers with a donation to Farm Aid.

Need inspiration? Check out all the #iamamodernfarmer posts from across the country – and around the world!

Related
Plants
Why We Need to Adopt More Orphan CropsShea Swenson
Animals, MTMF
Meet the Gay Goat Guys, a Modern Couple Committed to Putting Animals...Emily Baron Cadloff
Environment, Opinion, Politics
Opinion: With Sky-High Fertilizer Prices, There’s an Opportunity to Grow Crops More...Kathleen Merrigan
How-To, Water
Rainwater Harvesting Tips for BeginnersEmily Baron Cadloff
We use cookies on our website to give you the most relevant experience by remembering your preferences and repeat visits. By clicking “Accept”, you consent to the use of ALL the cookies.
Cookie settings ACCEPT
Privacy & Cookies Policy