Urban farming is as hip as it gets. But it just got hipper - and more profitable. 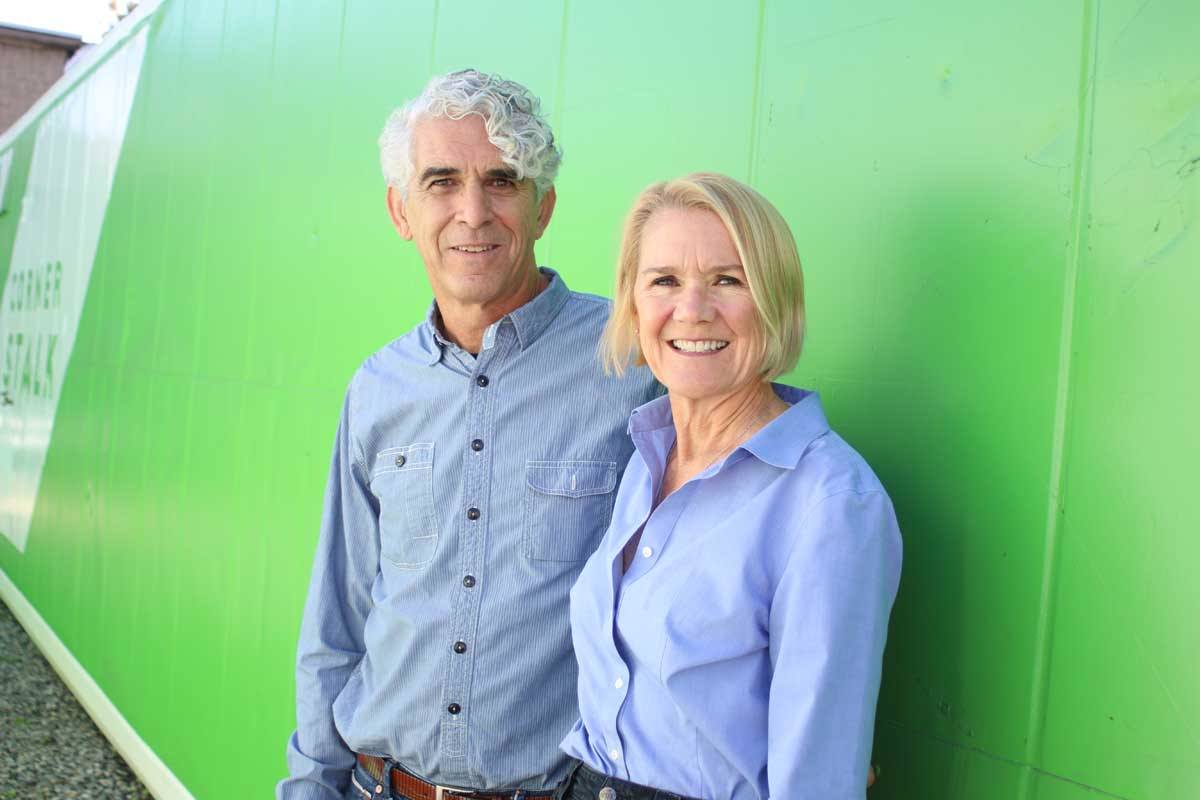 The company’s Leafy Green Machine, as they call their upcycled 40-foot shipping containers, comes with its own computerized brain that allows you to monitor the temperature, moisture, humidity, and nutrient levels of the hydroponic system remotely with a smartphone. Pink-hued LED light strips hang in front of each of the vertical grow towers, giving a party vibe to the whole operation. Bluetooth-connected speakers embedded in the ceiling make it easy to rock out to your favorite playlist while you work. Aesthetically, it’s a highly curated experience: equal parts Apple-inspired and post-industrial chic.

We wrote about Freight Farms back in 2013, and we wanted to follow up with farmers actually using the equipment. Despite the epic hipness of the marketing campaign, some of the first farmers to set up shop are a couple of down-to-earth Baby Boomers, Shawn and Connie Cooney of Cornerstalk Farm. A retired software developer and school teacher, respectively, the Cooneys show that the farm-in-a-box concept is not only cool, but practical. Shawn Cooney started, developed, and sold three different software companies in his career and then decided to buy four of the Leafy Green Machines in 2013 because he saw their entrepreneurial potential. In an area of 320 square feet – the equivalent of 10 standard size 4′ by 8′ vegetable beds – the Cooneys grow about 7,000 head of lettuce at a time, of which 500 or so are harvested each week. While other farms in the Boston area harvest vegetables mainly from June to October, Cornerstalk’s climate-controlled environment allows for year-round harvest. 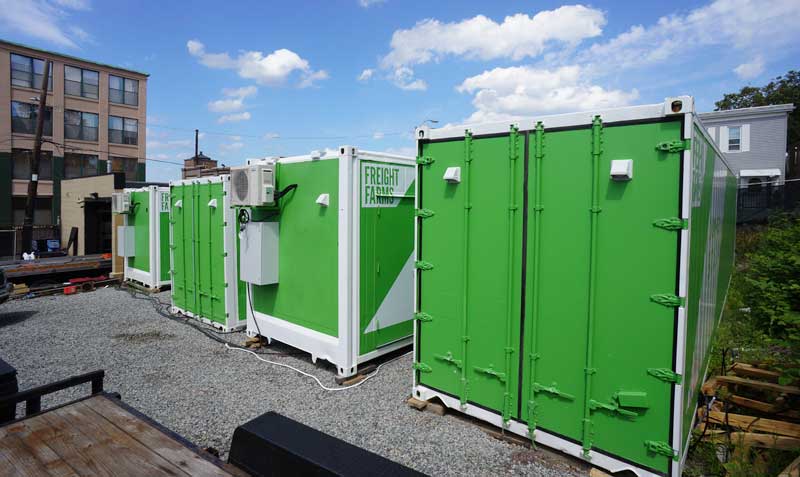 “As a business plan it made sense, so we went ahead with it,” says Shawn. The Cooneys settled in a tow truck company parking lot in East Boston, and within two months were starting to harvest and sell produce to restaurants and wholesalers. After the initial learning curve, they make around $15,000 per month from the four shipping containers, which Cooney says is enough to cover all of their overhead expenses – electricity, seed, nutrients, rent to the tow truck company, and loan payments on the shipping containers – plus a salary, “which is modest by any stretch of the imagination,” he says.

The Cooneys finagled a low-interest loan from the USDA to buy their shipping containers, through the agency’s farm equipment financing program. The program, which normally helps to finance tractor purchases and feed mill equipment, had never given a loan for anything like Cornerstalk’s Leafy Green Machines (LGMs), but Cooney says he “found the person in charge of the Boston area [at the USDA] and worked with him to vet and underwrite the freight farm units as farm equipment. We spent a lot of time visiting, going back and forth, and comparing it to other things that they know. In the end they said, ‘yeah, this is farm equipment.’ Therefore you can get a standard USDA loan for it.”

In August, the Cooneys were accepted as a vendor to the newly formed Boston Public Market, a year-round five-day-per-week indoor farmers market, which he says is increasing their retail sales dramatically and boosting their income to a point that is “pleasantly profitable.” Cooney says that “some kind of high-volume wholesale outlet and a strong retail connection are a good combination to make any kind of urban agriculture thing work.”

Shipping container farms maybe the capitalism’s best answer to urban agriculture yet. They are modular, lending themselves to economies of scale, and completely stackable – when you’re ready to expand the farm, you build up, instead of out. Plans for skyscraper farms have never taken off, primarily because it costs so much to, well, build a skyscraper. But it’s not hard to imagine that this scrappy shipping container version of the concept might be viable alternative, mainly because you can build them one story at a time. Not much is needed in terms of infrastructure, either. The Cooneys get power from an extension cord plugged into the tow truck company’s office (solar panels are also an option), and their water comes through a garden hose (though LGMs recycle irrigation water and need only 10 gallons per day – so you could even go old-school and bring it in a bucket).

This style of urban farming seems destined to attract a different crowd than other forms of urban agriculture – like tech-savvy folks who are accustomed to working in office towers, but may not be very comfortable with dirt under their fingernails. These are folks who likely want to live in a house in the city, which Cooney thinks is a realistic notion given his experience thus far.

“It’s a very different group of people,” says Cooney, referring to the urban farmers he meets at the Boston Public Market. “They’re all reliant on someone else for money.” Urban real estate is expensive and is often poorly suited for growing food crops – dealing with contaminated soils, site security, and basic infrastructure adds up. Cooney says most urban farmers he knows don’t actually pay market value for the land they grow on, but are subsidized by non-profits or the local government. “The land trust here is spending $75,000 to $100,000 to make a little plot of land farmable for someone who is going to farm it for four months a year and not make any money,” he says. “It pisses me off a little bit.” 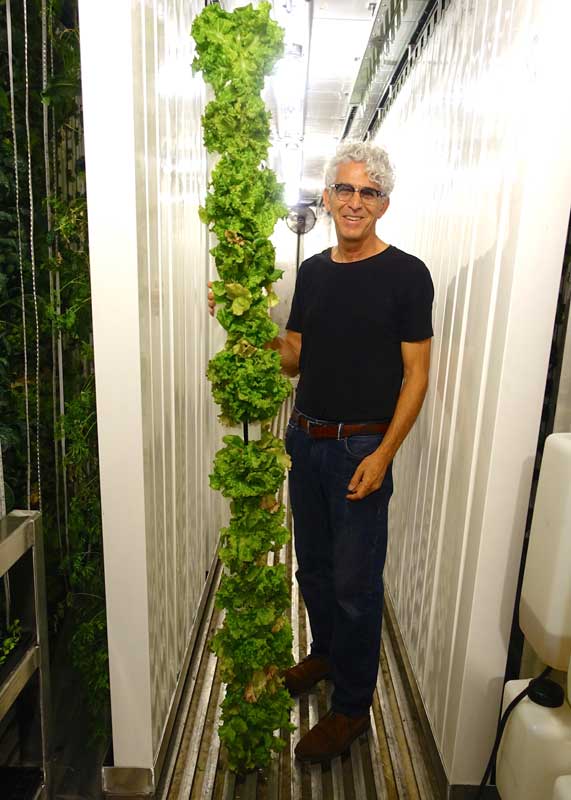 There are drawbacks to the shipping container approach, however. The most obvious one is that hydroponics are mainly suited to growing herbs and leafy green vegetables. LGMs are never going to produce wheat or apples, though some hydroponic growers have been successful with tomatoes, strawberries, cucumbers, and a handful of other crops. Cooney says 85 to 90 percent of what they grow is lettuce, just because they’ve found that’s what has the highest profit margin.

The Cooneys certainly aren’t down on their fellow urban farmers; they just see most of what constitutes the urban agriculture movement as having a different orientation than they do with Cornerstalk. “It’s teaching people how to farm, which is a good thing. It’s a very community-oriented, build-up-the-neighborhood thing. But they’re doing something that they can’t make any money at, which is messed up.” And, he says, with a slight air of annoyance, “they say what we’re doing is not farming.” That’s not an entirely unfair assessment, though – it’s not just farming; it’s business. But in the end, that’s what will pave the way for urban agriculture to succeed.