(Re)Born to Be Wild: Coaxing Patagonia Back to Its Natural State

Thanks to a visionary couple and an ever-growing army of volunteers. 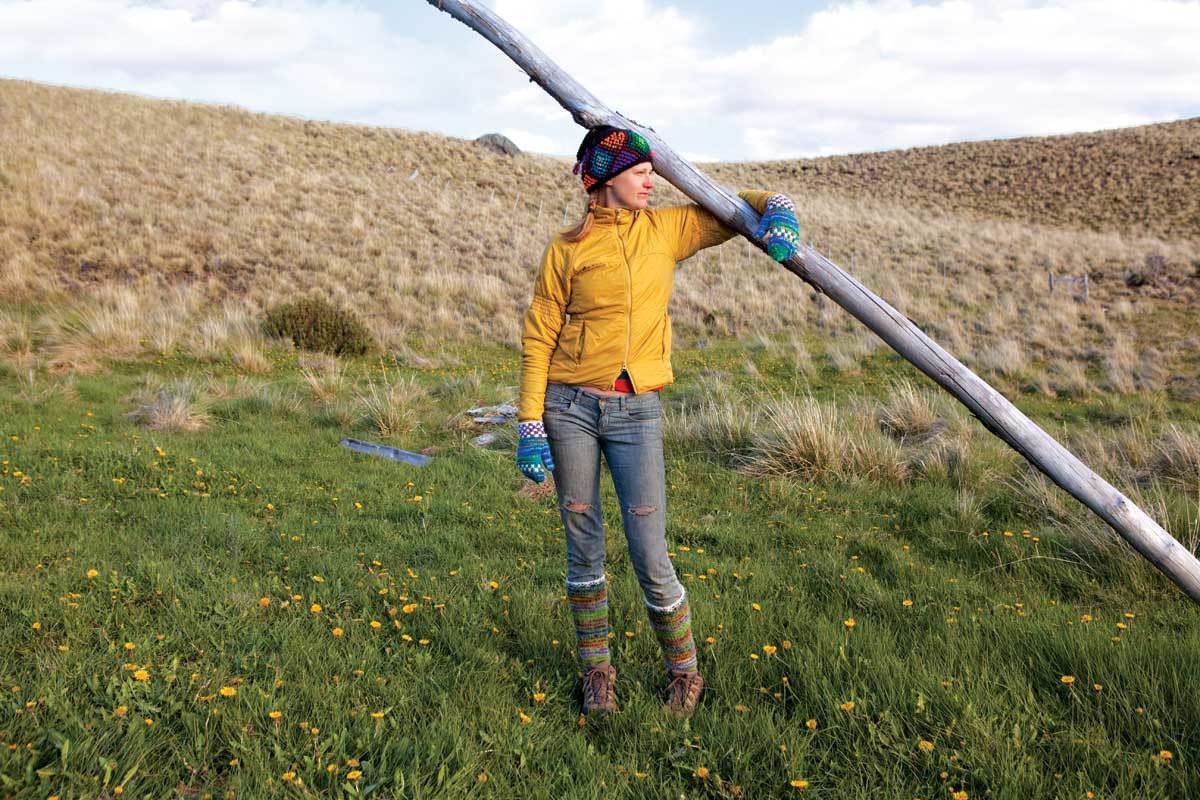 Kris and Douglas Tompkins have spent the past 25 years attempting to undo the damage. Since moving to southern Chile from Northern California, the former outdoor-clothing execs (she was the CEO of Patagonia, Inc.; he founded The North Face) have purchased some two million acres in South America, returning them to biodiverse health. The couple has gifted much of that land to the governments of Chile and Argentina, in the form of protected nature sanctuaries and national parks. Now the Tompkinses, through her nonprofit Conservacion Patagonica (CP), are working on what just may be the largest single grasslands restoration project ever attempted: 650,000 acres in Chile’s Aysén region that will be called Patagonia National Park once completed and donated to the federal government. They aren’t doing it alone. 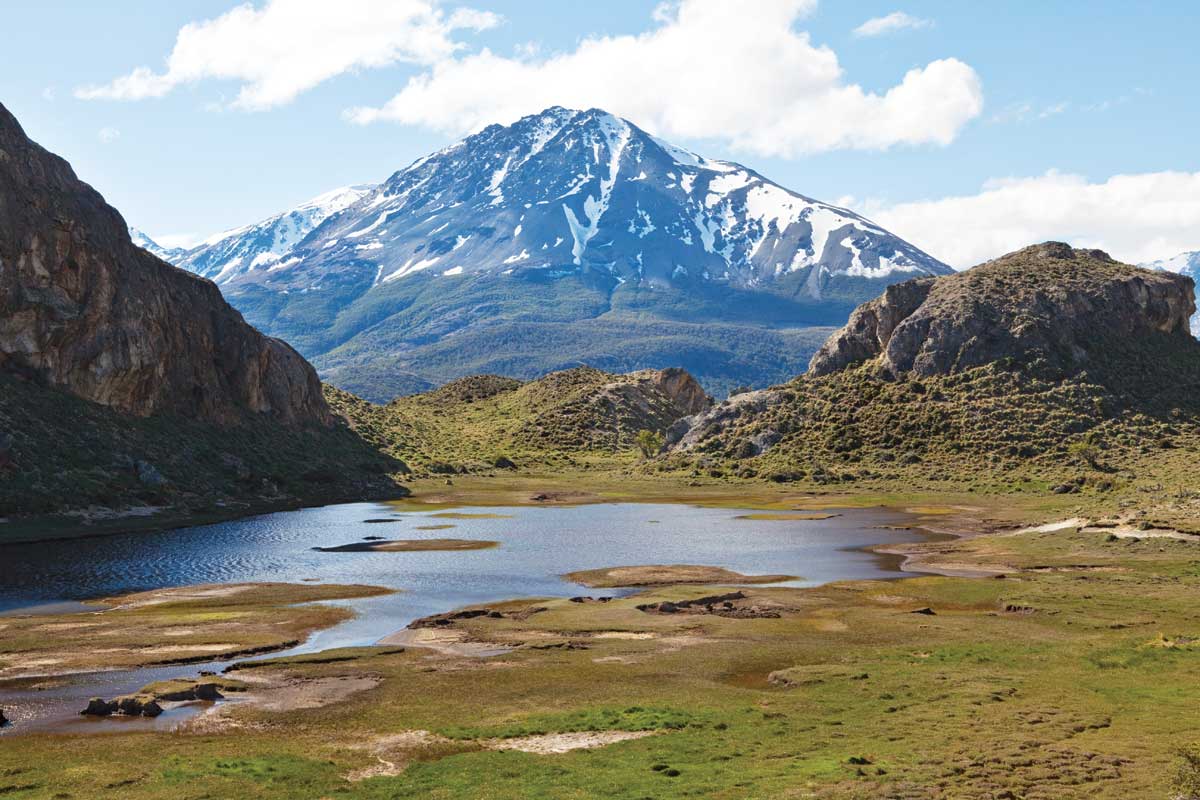 The 7,890-foot-high Cerro Kristine mountain towers over a lagoon in Chile’s Patagonia Park, 190 miles from the city of Coyhaique. 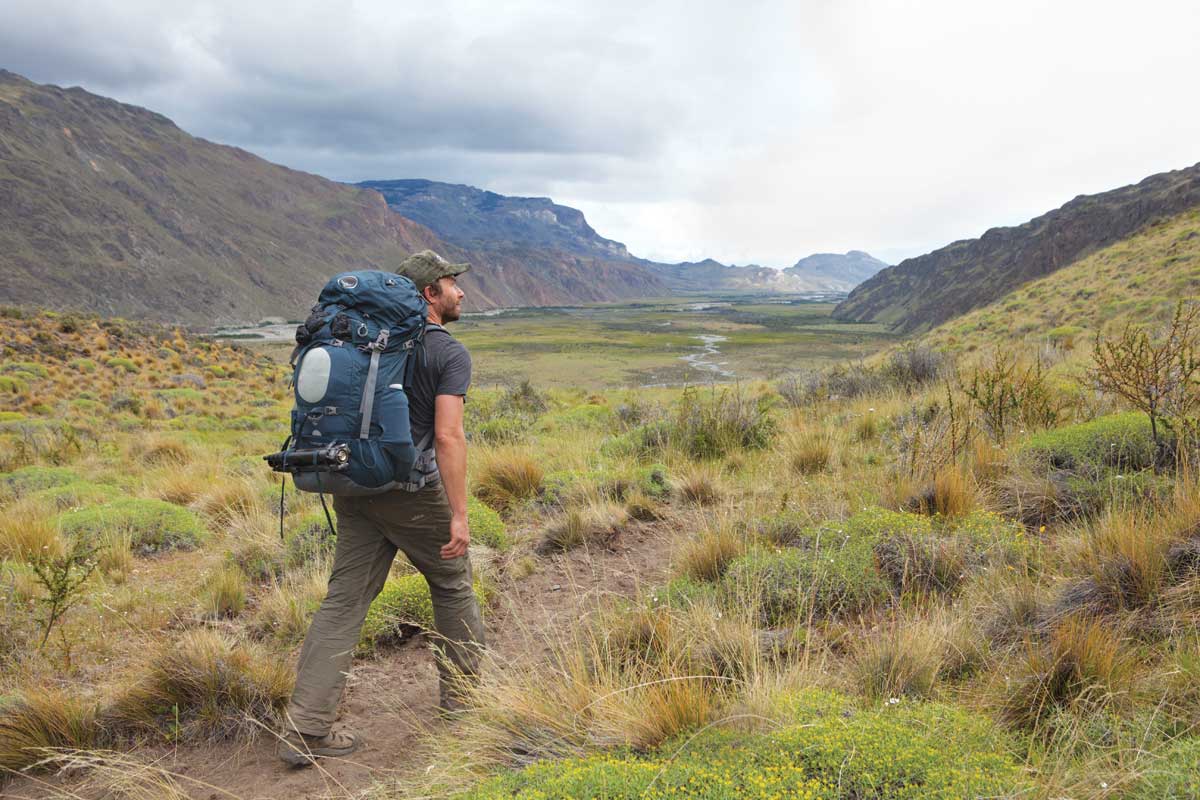 Corey Arnold, a visitor from Oregon, hikes the Aviles trail, which cuts through the park.

MacArthur Fellow Amory B. Lovins, who co-founded Colorado’s Rocky Mountain Institute, has collaborated with Kris and Douglas to ensure that Patagonia National Park will be both self-sufficient and carbon-neutral. Chilean architect Francisco Morandé Ruiz-Tagle designed the park’s Lodge at Valle Chacabuco, constructed of local stone and recycled wood. (Proceeds from the lodge go back to the park.) Ruiz-Tagle also helped plan the campgrounds, which provide inexpensive access to the public. “You want people to come out and fall in love,” says Kris, “because you won’t protect something unless you love it.”

When CP purchased Estancia Valle Chacabuco to secure its land for the park, the foundation offered jobs to the sheep ranch’s gauchos. The sheep, however, didn’t fare quite so well. Once the estancia’s fences had been removed, the herd started falling prey to pumas and foxes – until the park’s resident veterinarian, Paula Herrera, instituted a guard-dog program. She’s since trained eight litters of Great Pyrenees puppies, raising them alongside the lambs. “We know we can’t keep livestock in a national park, but we’ve had such good results with the dogs that we’ll continue to train them for neighboring ranches,” says Herrera, who also oversees the park’s volunteer efforts. 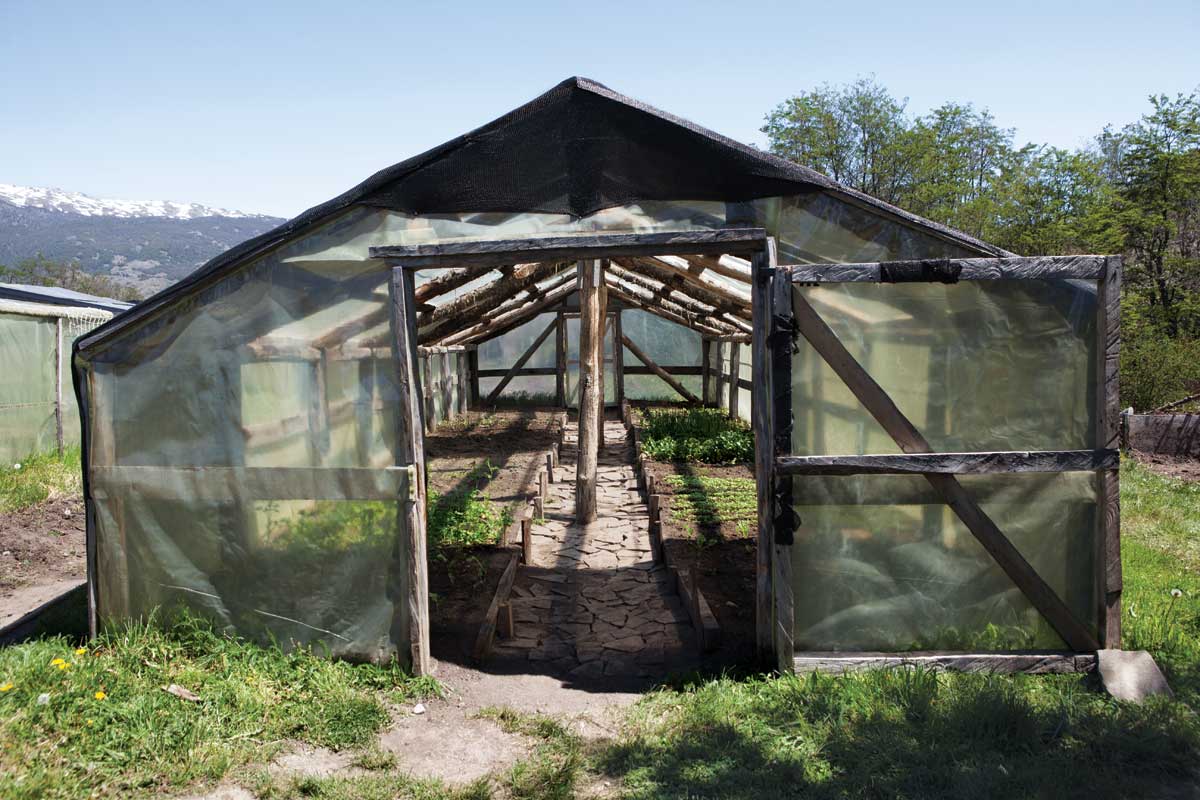 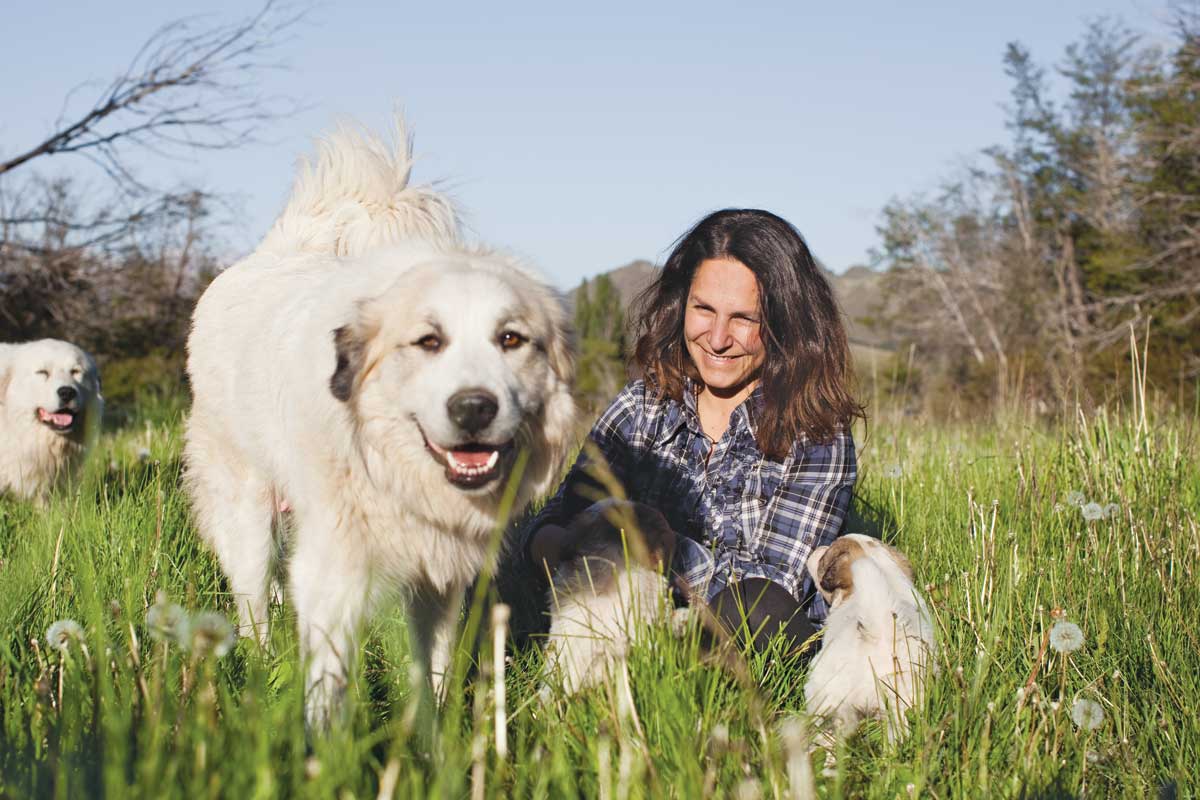 Paula Herrera, the park’s veterinarian and volunteer coordinator, trains Great Pyrenees to protect sheep inherited from a former estancia that was incorporated into the park. 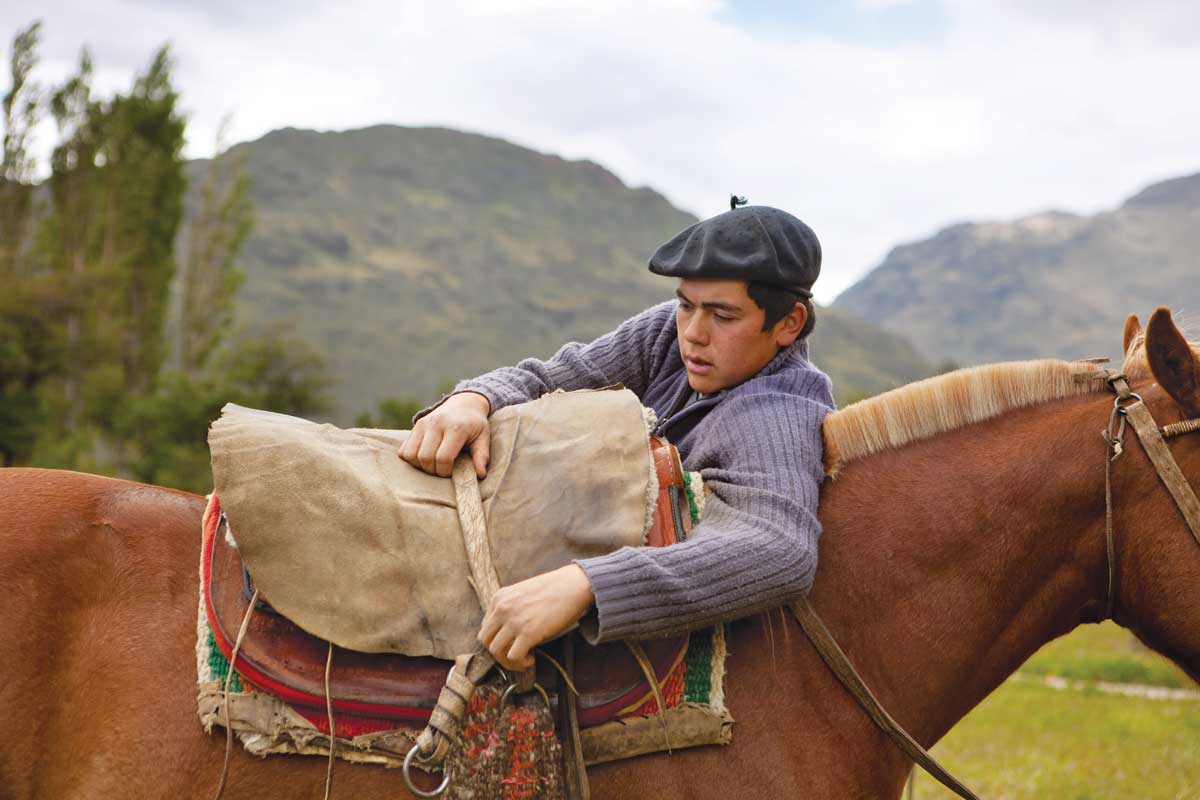 Each year, approximately 70 volunteers (chosen from more than 200 applicants) spend 18 days camped out in the park. Herrera seeks candidates with strong Spanish-language skills, experience living in small groups, and enthusiasm for hard work. Supplies are carried in by horse; tents are pitched near job sites. The volunteers weed, tear down fences, build bridges, and tackle other tasks that “we don’t have the budget to do,” says Herrera. “Our volunteers go out in the world and become ambassadors for the park.”

This year, some of those volunteers will participate in a new initiative, growing fruit, herbs, and vegetables for the lodge’s restaurant, as well as for park employees. “We want to send a strong message that organic agriculture is cost-effective,” says head gardener Francisco Vio. “If it works here in this erratic climate, it can work almost anywhere.” With 30 different crops thriving in 50 raised beds and simple wood-framed greenhouses, Vio aims to show what’s possible. Which pretty much sums up Kris and Douglas Tompkins’ original vision for this rugged and inhospitable – yet completely intoxicating – landscape. “When someone asks me, ‘Why here?’” says Kris, “I answer, ‘Just look around you.’” 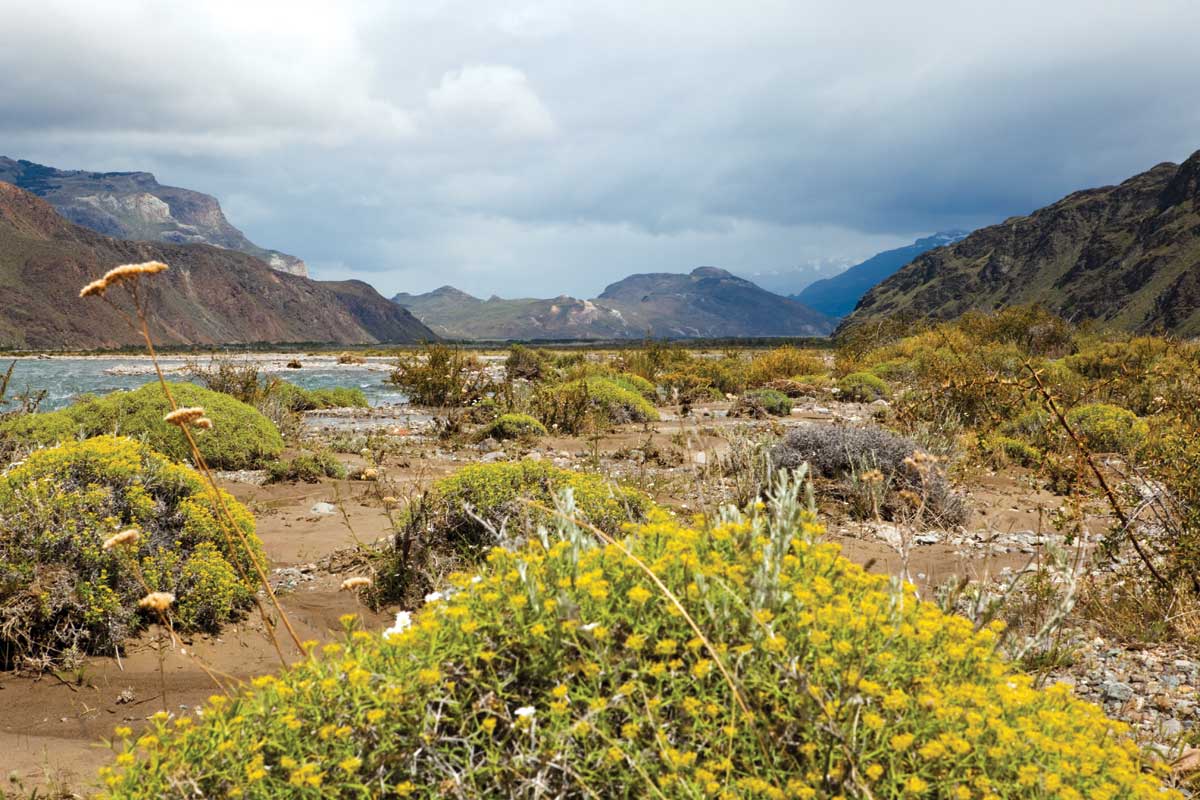 The Aviles trail winds through wildflowers and native grasses along the shore of Chile’s Rio Aviles. 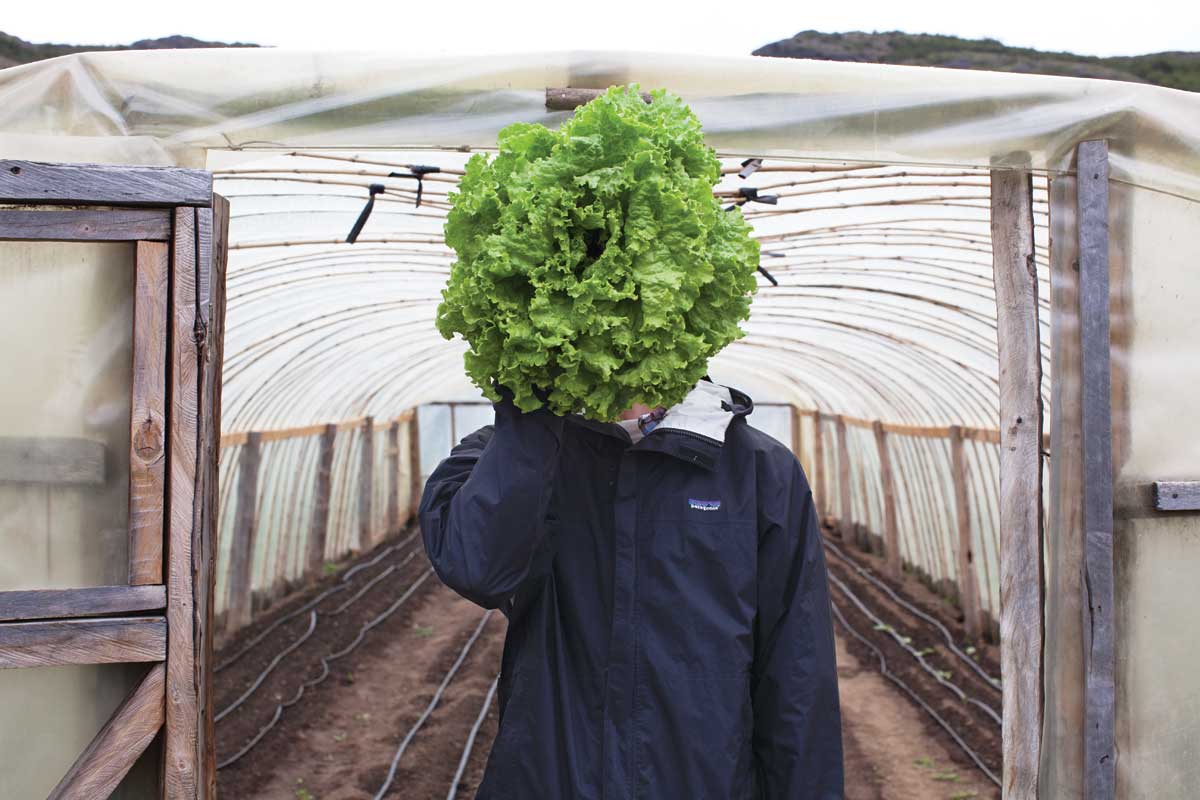 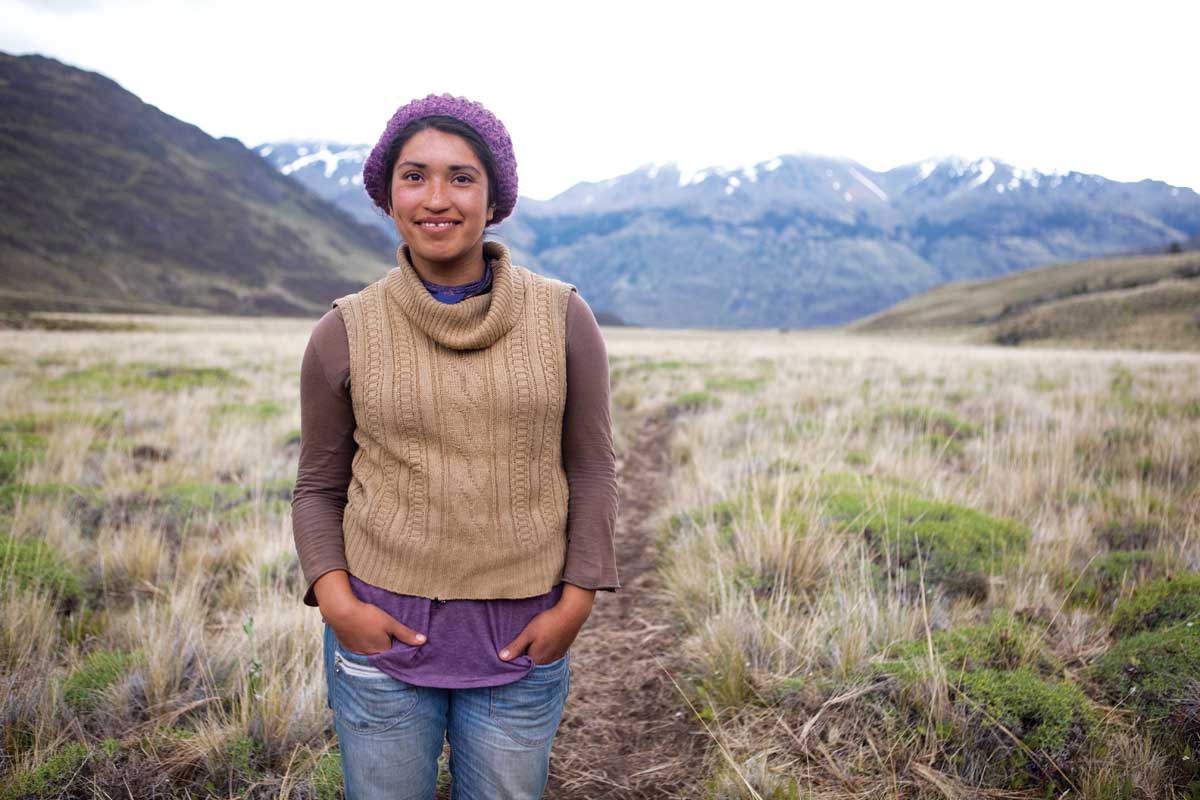 Volunteer leader Celeste Iñiguez Quezada commutes to the park from the Chilean town of Cochrane, 30 miles away. 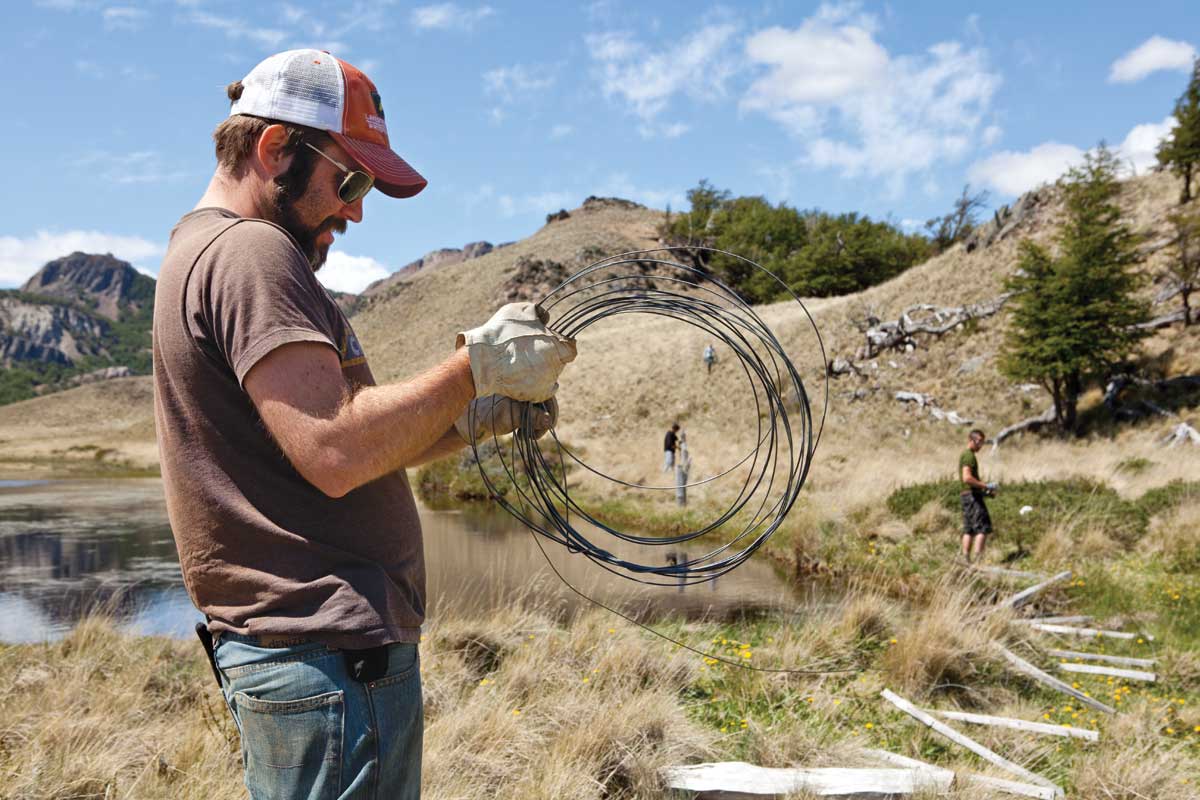 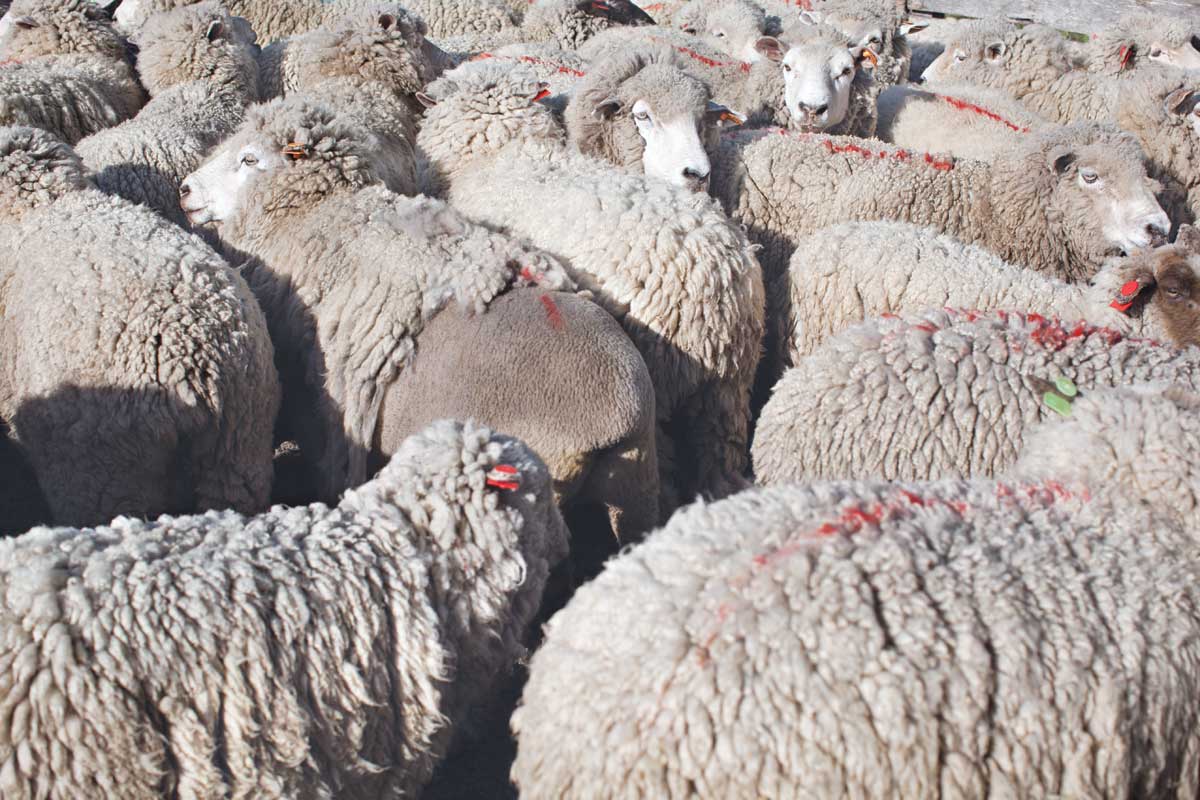 A few hundred sheep remain from the estancia days. 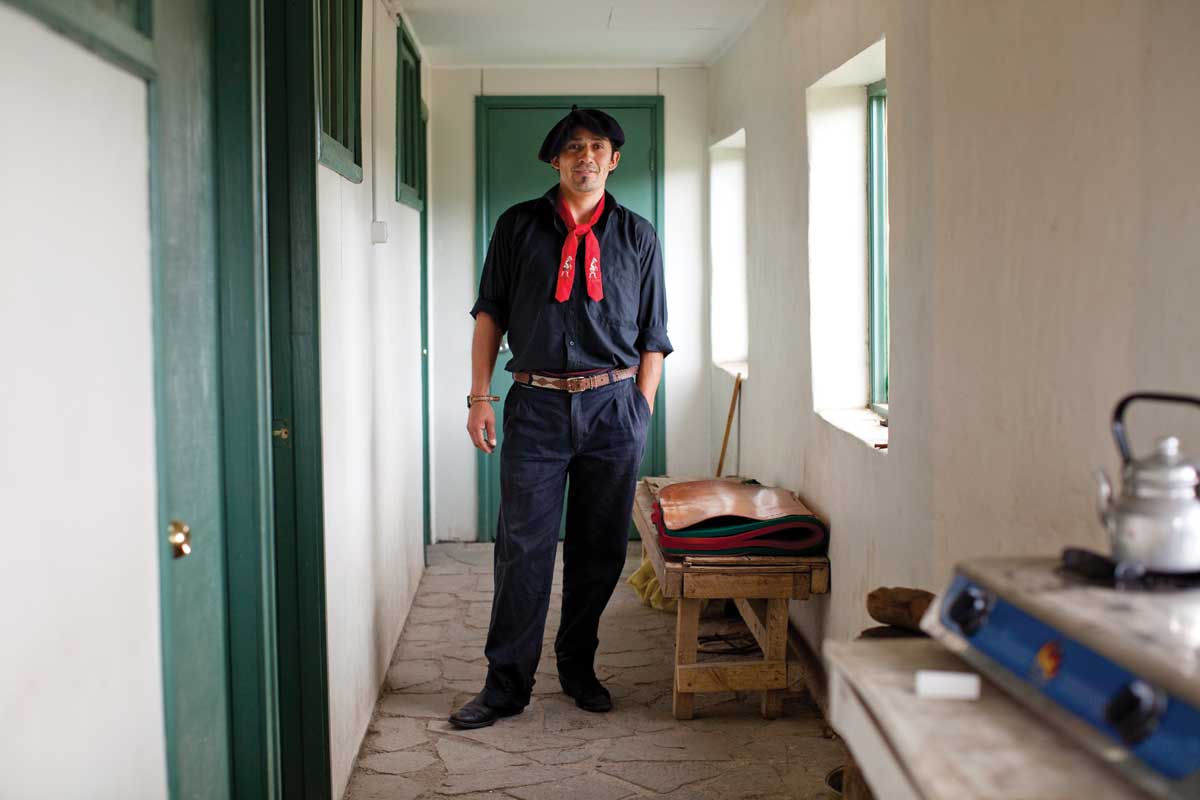 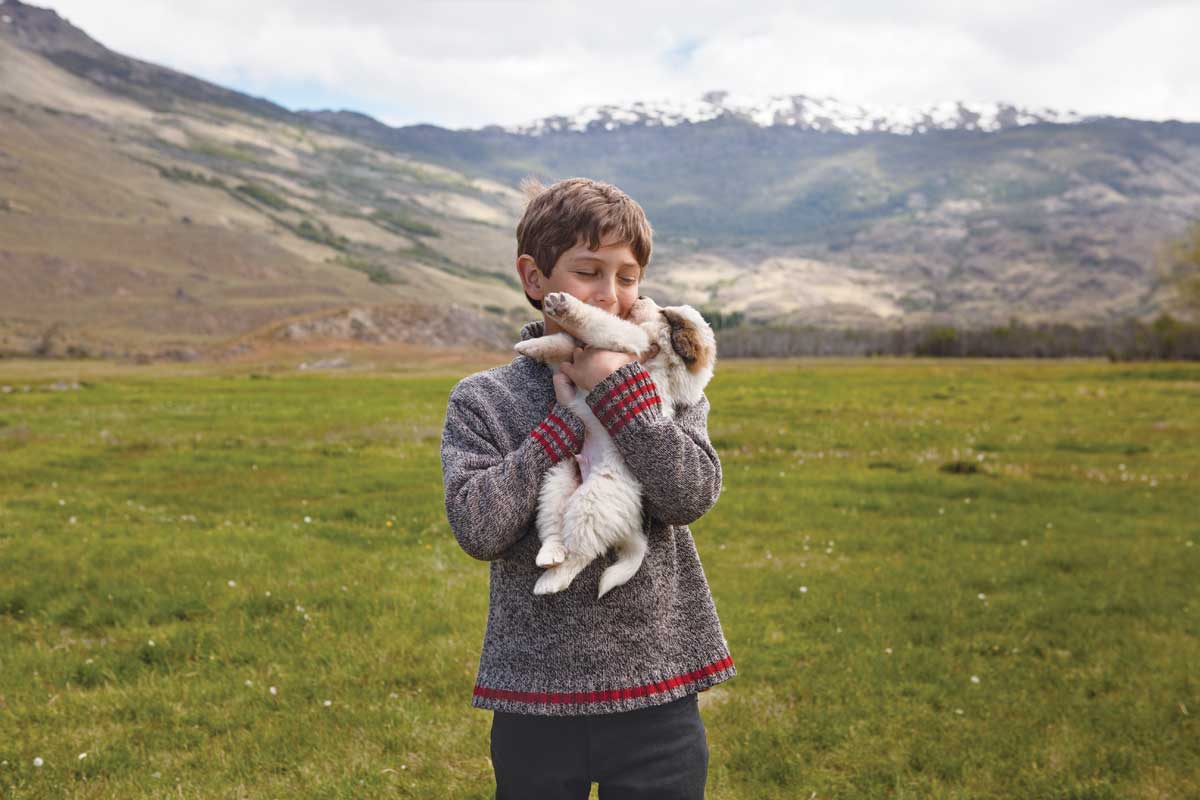 Martin, son of vet Paula Herrera, cuddles one of the park’s sheep-guarding pups.

To reach Chile’s Patagonia Park from the capital city of Santiago, hop a puddle-jumper to Balmaceda, then rent a car for the 6-plus-hour drive (south along the Carretera Austral highway) to the park entrance at El Cruce Entrada Baker. 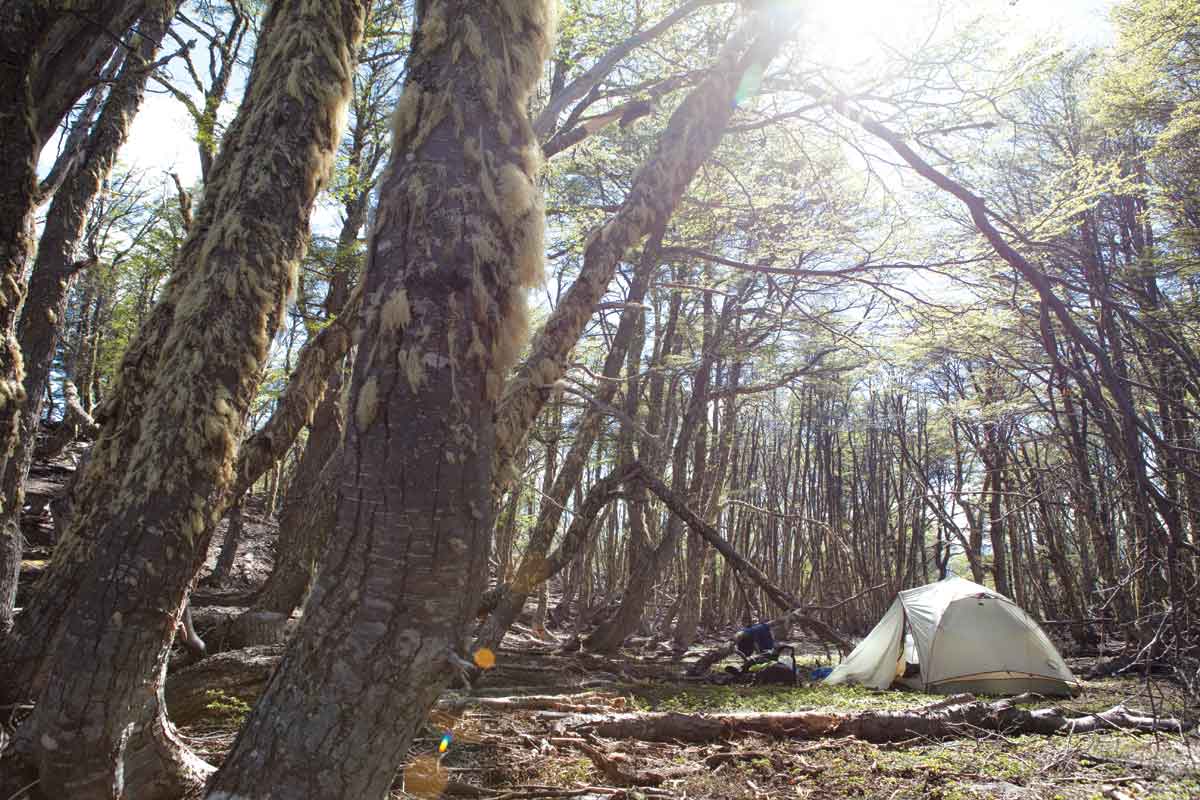 Volunteers rough it. Though it’s too late to apply for this year’s volunteer program, you can submit an application for 2016 here. Accepted participants pay a $600 fee and pitch their tents near work sites (above). 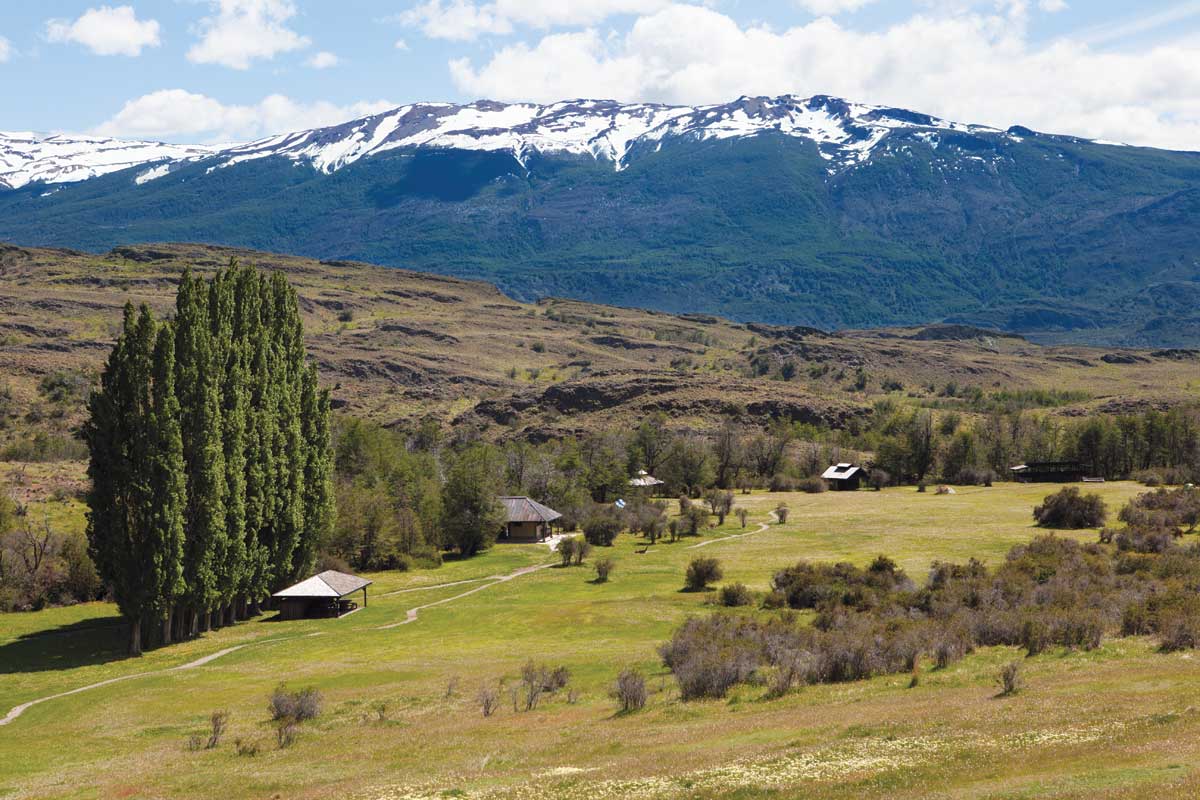 One of two campgrounds in Patagonia Park, West Winds accommodates up to 60 tents and offers restrooms and sheltered picnic areas.

Campers enjoy hot showers. The West Winds (above) and Stone House campgrounds are open from October 1 to April 30, on a first-come, first-served basis, for $10 per night. Both sites include access to sheltered and flush toilets. 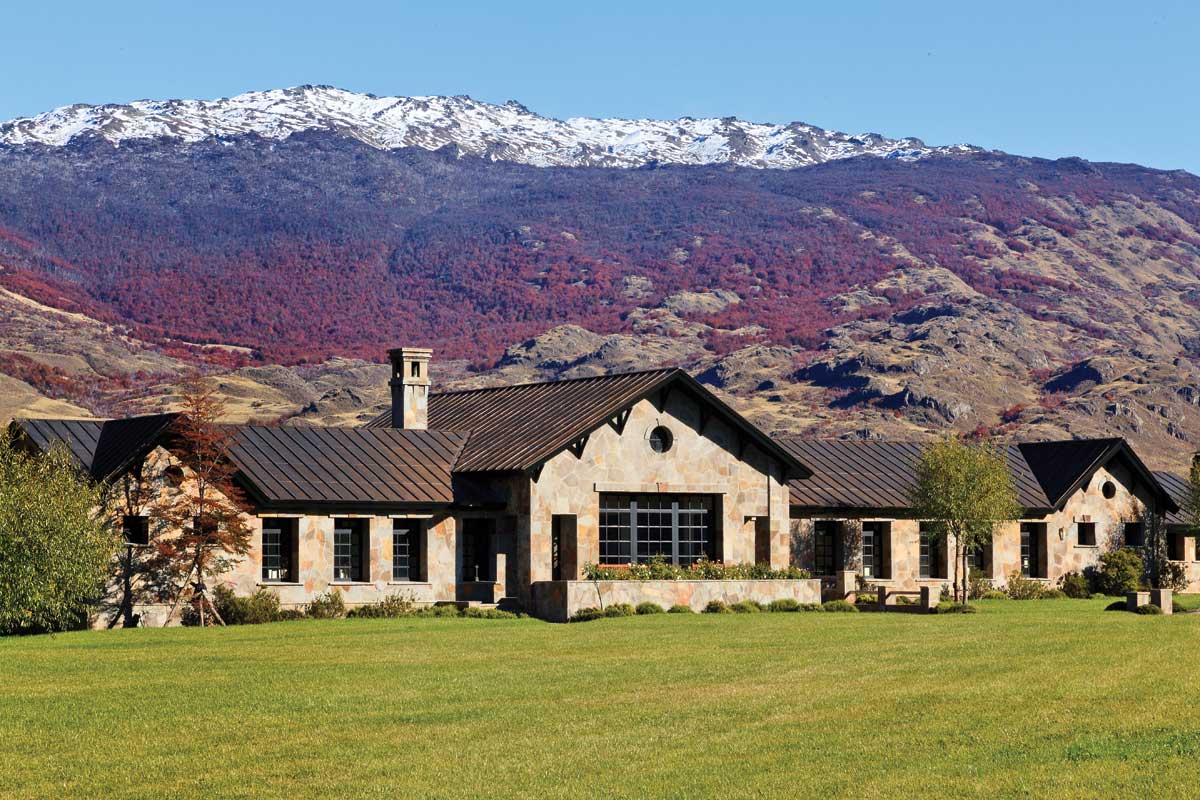 Vacationers luxuriate at the lodge. Far less rustic accommodations are available at the Lodge at Valle Chacabuco (above), also open from October through April. Rates, which include breakfast, range from $150 to $350 per person per night. (For reservations, email [email protected].)

Connie McCabe, a former associate editor at Saveur and Latin American correspondent for Travel+Leisure, lived in Santiago, Chile, for 15 years.