For refugees cut off from their agrarian pasts, an urban farming program does more than bring food to the table. 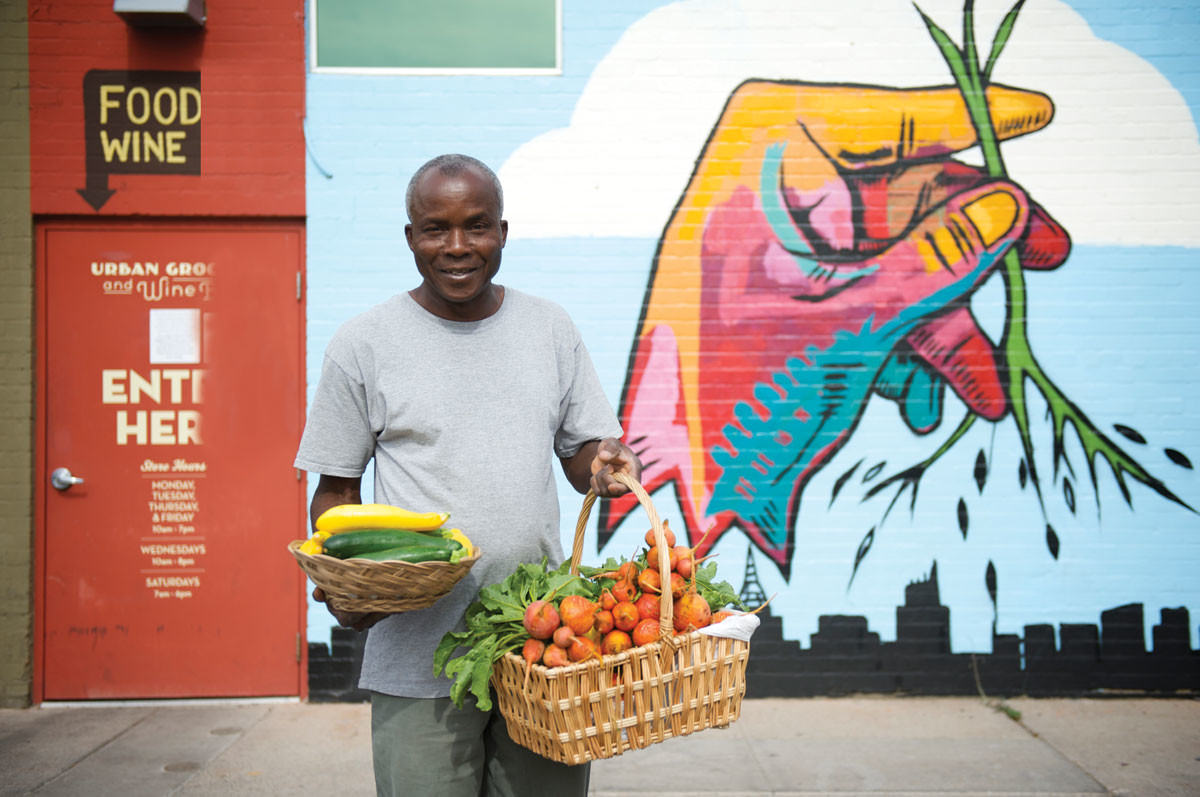 Ogou fled to neighboring Ghana by foot, leaving behind everything he knew. (For two months, his family believed he’d been killed.) Both of Ogou’s parents farmed, and while serving in the army, he had lovingly tended the 76-acre cornfield responsible for feeding his fellow fighters. Ogou eventually built a happy life growing peanuts, yams, and peppers in his adopted Ghanaian village, but when a shift in that nation’s leadership rendered him vulnerable once again, he slipped off to a cousin’s place in the bustling capital city of Ivory Coast. Planting was out of the question. In 2008, the United States granted Ogou asylum, and he relocated to Chicago. “A very cold place,” he says, “where you cannot farm.” After two long winters, Ogou heard about a program in Phoenix, Arizona, run by the International Rescue Committee (IRC) that enables refugees to grow food. He immediately climbed on a plane.

Founded in 1933, the IRC permanently resettles people displaced by persecution, conflict, and disaster. The nonprofit organization’s agricultural program, New Roots, got its start in 2005, after a group of women who had escaped Somalia’s civil war expressed a fierce desire to farm in their new home of San Diego. IRC staff helped the women transform a 2.3-acre vacant lot into a vegetable garden, and by the end of the first summer, refugees from around the world were harvesting 1,000 pounds of produce each week. Today, those original Somali women, known as the Bahati (“Lucky”) Mamas, are able to support themselves by selling fruits and vegetables to area restaurants and at farmers markets. 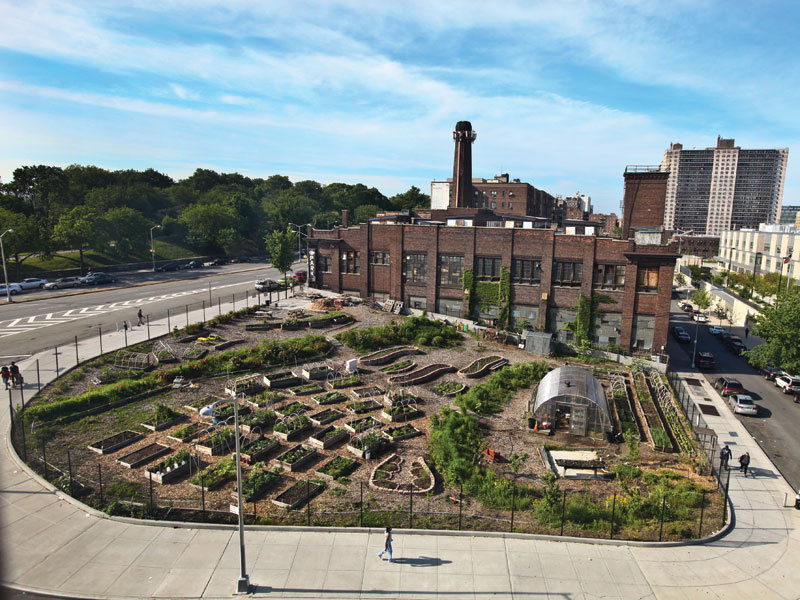 The New Roots mini-farm in the Bronx is tucked alongside a busy thoroughfare. Byron Times / NY Times / ReduxPictures 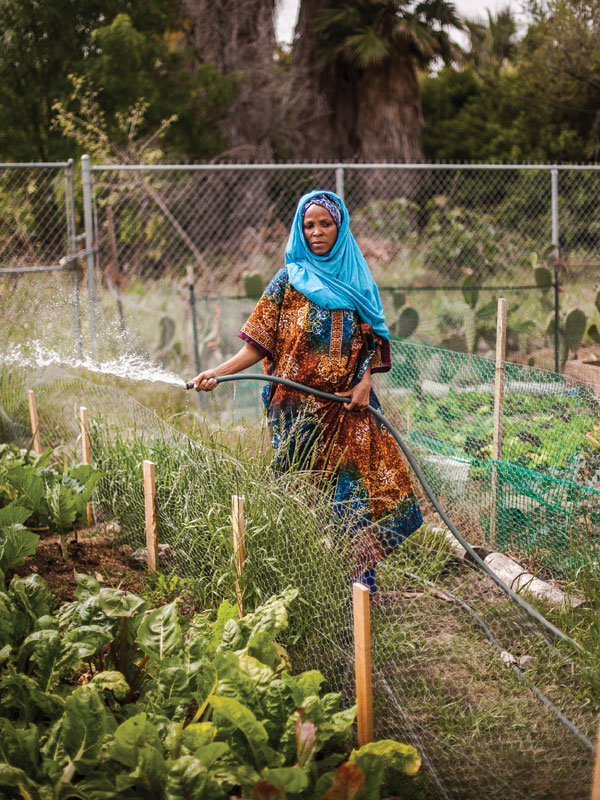 The Somali women who farm in the IRC’s San Diego garden are known as the Bahati (“Lucky”) Mamas, because of the success they’ve found marketing their produce. Shaun Boyte / IRC

The New Roots program has since expanded to 12 other cities, including Oakland, Baltimore, and Salt Lake City. In each, the IRC works with the local government to access a parcel of land (whether through leases or other arrangements), then makes it available to refugees and other individuals and community groups for a modest fee. Gardening alongside locals enables the newcomers to better integrate into their neighborhoods. The IRC also offers farmers market tours, cooking classes, and agricultural workshops as a part of the program.

In the South Bronx, kids from nearby high schools tend garden beds next to recent arrivals from Myanmar, Iraq, and Afghanistan.

On a half-acre expanse of green tucked improbably alongside a busy thoroughfare in the South Bronx, kids from nearby high schools tend garden beds next to recent arrivals from Myanmar, Iraq, and Afghanistan. Beneath a picturesque slope of Queen Anne’s lace, bee balm, and mountain mint planted to attract pollinators, Jamaicans harvest callaloo, and Cambodians, who settled in New York during the 1980s, cultivate bitter melons. Taking a break from shoveling compost, a Trinidadian woman talks proudly of the arugula, spinach, and peppers that she feeds her family. In this borough, where health indicators rank among the worst in the nation, the nutritional benefits of the program take on a particular resonance, says Kathleen McTigue, who oversees the Bronx farm for the IRC.

Waleed Al Shok, a 39-year-old Iraqi who came to New York City from Baghdad in 2013, is thankful for the mental dividends of New Roots. He’ll often bring his wife and young sons to the farm to relax amid his eggplant, beans, and garlic. None of it quite measures up to the taste of dates picked from his grandfather’s yard back home, Al Shok concedes, but there’s a sense of peace that comes simply from working the land. “Life in New York is not easy, especially if you have a family.” 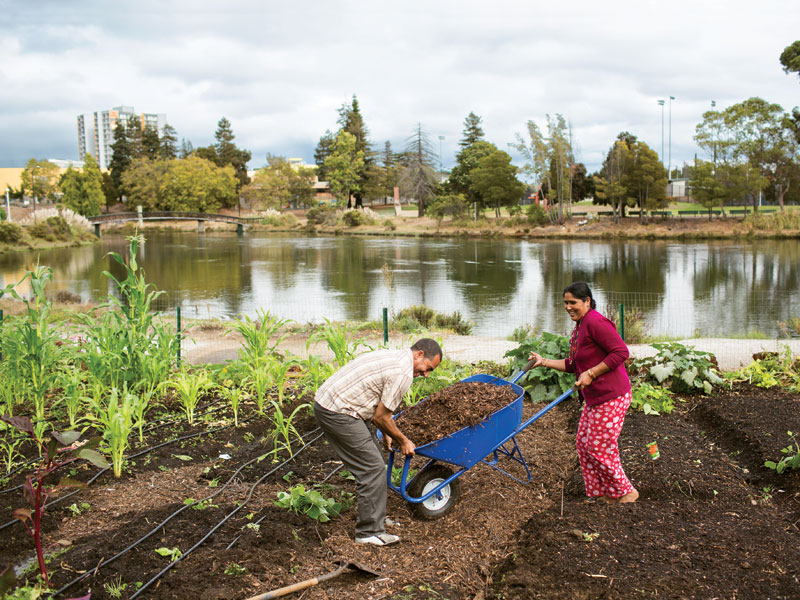 Kapil (left) and Chhali Mainali, at the program’s Oakland garden, came to the U.S. from Bhutan. Jean-Philippe Dobrin / IRC

Back in Phoenix, 63-year-old Koffi Ogou rarely misses a day tending the plot he rents from the IRC. After an initial fail (Ogou planted his entire quarter acre with okra, which Arizonans had no interest in eating), he now supplements his work as a caregiver at a group home by selling sweet potatoes, watermelon, turnips, and (a little) okra through a local CSA and to a network of customers built up over the years. Says Ogou, who doubts he’ll ever again touch the rich soil of his homeland, “This program is really good for those who come almost naked, who don’t have anything, not even hope.”

Popular
The Fertilizer Shortage Will Persist in 2023Shea Swenson
7 Smokable Plants You Can Grow That Aren’t MarijuanaBrian Barth
Agricultural Runoff Pollutes Well Water, a ‘Public Health Crisis In the Making’Madison McVan, Investigate Midwest
Move Over, Mezcal. A Sustainable Tequila Alternative Is Taking Over.Hollie Stephens
Why Don’t We Eat Turkey Eggs?Dan Nosowitz
Explore Modern Farmer
Related
Features, Food Security, Labor
The Rise of Virtual Farmers MarketsLeah Borts-Kuperman
Environment, Labor, Water
California Farms and Farmworkers Attempt to Recover From Record FloodsNaoki Nitta
Books, How-To, Lifestyle
How to Turn Your Garden Into a Business, No Matter the SizeEmily Baron Cadloff
Food Waste, Opinion, Politics, Technology
How Solar-Powered Refrigerators Could Cool Down Climate ChangeAbay Yimere
wpDiscuz
We use cookies on our website to give you the most relevant experience by remembering your preferences and repeat visits. By clicking “Accept”, you consent to the use of ALL the cookies.
Cookie settings ACCEPT
Privacy & Cookies Policy