How to Grow Your Own Tomatoes, Part 5: Harvesting

Within two months of plunking tomato seedlings in the ground, the fruit should be filling out and starting to turn color. 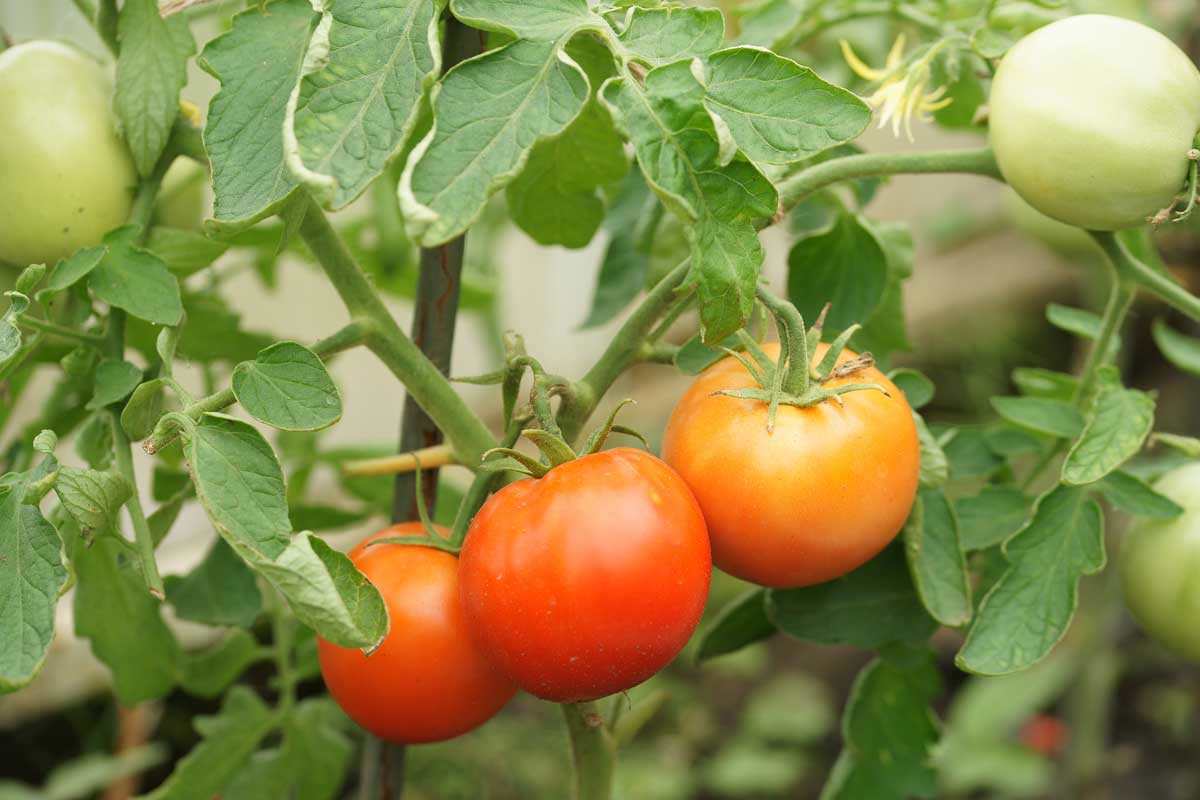 After everything involved in preparing the soil, training and pruning, warding off disease and nurturing the crop to its grand finale, you would think that the act of harvesting would be a painless, straightforward affair.

But when it comes to tomatoes, there’s more to harvesting than simply plucking it from the vine and biting in – there’s a bit of science, too. Here are a few pointers to deflate the myths and make sure that you get the best-tasting tomatoes as a reward for all your hard work.

A tomato is at its peak of flavor when it becomes fully colored (whether that’s red, yellow or green-striped) and the texture is somewhere between firm and soft when you push into it with your thumb. In many cases, they will mature to this ideal state on the vine. If so, pick them as they ripen and enjoy. It’s best to cut them off with scissors or hand pruners with a short stub of stem attached – otherwise the area around the scar at the top may rot before you have a chance to eat.

Contrary to popular belief, tomatoes ripen just as well off the vine as long as they are picked in a ‘mature green’ state, which means that the seeds inside the fruit are fully developed. Since judging whether the seeds are fully developed is beyond the scope of most backyard tomato growers, it’s sufficient to say that green tomatoes may be picked once they’ve reached their maximum size and have begun to show the first blush of color on their skin.

There are several circumstances where picking a tomato before it is fully colored makes sense:

Tomatoes do not need to be in a sunny window in order to ripen. In fact, they ripen much faster if placed in an enclosed space since they emit ethylene gas as they ripen. The greater the concentration of ethylene gas around the fruit, the faster and more fully they will ripen. A cupboard, paper bag or between sheets of newspaper are good places to ripen tomatoes indoors. They need oxygen to ripen, so don’t seal them up in a plastic bag or Tupperware. And above all, don’t put them in the refrigerator – they will not ripen at temperatures below 65.

Green tomatoes ripen indoors in approximately two weeks. To speed up the process, put a ripe banana or cut-open apple in a bag with the green tomatoes – both emit lots of ethylene gas.

Once tomatoes have fully ripened, they can be kept for up to four weeks at 55 degrees before they start to decay. They may last even longer in the refrigerator, but they turn bland and mealy when kept below 50 degrees.

Bringing in the Harvest

With determinate tomato varieties, the fruit ripens all at once, so you should be ready to make tomato sauce, can them, dry them or find other ways to preserve or make use of the harvest on short notice.

Indeterminate varieties produce fruit on rolling basis throughout late summer until the first frost of fall. This is a blessing for home growers who just want a few tomatoes for salads and sandwiches each week, but it means you will inevitably have unripe fruit of varying sizes left on the vine at the end of the growing season. Any green tomato that is at least three-quarters of its mature size will ripen indoors into a respectable red tomato, but the less mature fruit can still be enjoyed by pickling, as fried green tomatoes or in other recipes that call for unripe tomatoes.

The first cold snap of fall signals the end of the tomato season, but if you pick the last of the fruit and allow it to ripen indoors, you can enjoy the harvest for many more weeks.