Farmworkers are 20 percent more likely to suffer sun afflictions than any other job. 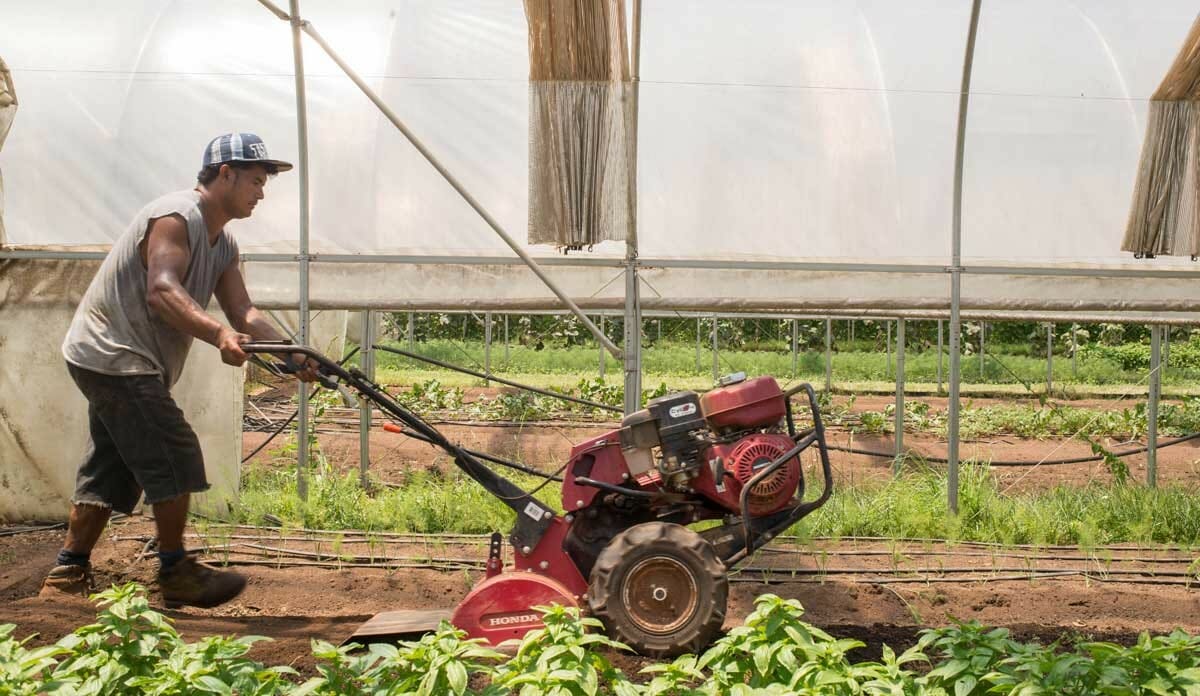 Gutierrez is a veteran farm hand, managing a team of field workers for Woodland Gardens, a large organic produce farm. Working outdoors, he says, you can’t beat the heat, you just survive it.

“Drink lots of Gatorade,” Gutierrez says. His heat-beating strategy follows guidelines written by organizations like the Occupational Safety and Health Administration (OSHA): drink plenty of water, take breaks and seek shade, especially when feeling overheated. But farmworkers fall sick and even die each year from the sun’s brutal effects, despite the relative ease of avoiding heat stress – which manifests as rashes, cramps, exhaustion and strokes.

“Every summer you hear stories of deaths in fields from coast to coast,” says Virginia Ruiz, director of occupational and environmental health for Farmworker Justice, a Washington, D.C.-based advocacy group. “A lot of it is just lack of information and education by employers and workers themselves.” 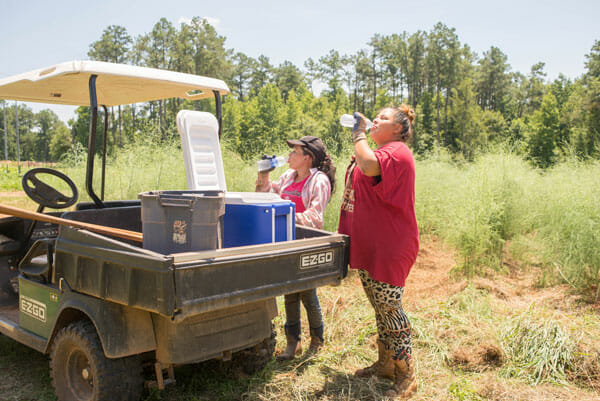 Workers at Woodland Gardens stop for a water break during an afternoon with temperatures above 100 degrees, on Wed., June 22, 2015.

Agriculture ranks as one of the most dangerous occupations in the U.S. Between 2003 and 2011, more than 5,000 farm laborers died while at work. While tractor overturns and machinery accidents claim the most lives, heat stress is a serious threat.

To combat further heat-related deaths and illnesses, OSHA launched an awareness campaign in 2011 aimed at both workers and employers with the core message of “Water. Rest. Shade.” Organizations like Farmworker Justice helped disseminate the campaign, training advocates around the country in heat stress education. Despite having the information at hand, employers have failed at keeping workers safe, according to a CDC report.

Unfortunately, farmworkers are often incentivized to neglect their health. On farms that pay workers by a piece harvest rate and not by the hour, advocates say, workers feel pressure to skip breaks to maximize their wages.

Even in states like California, where heat safety regulations have been on the books for a decade, enforcement can be sparse and farmworkers still suffer. Following a spate of heat-related farmworker deaths between 2008-09, the United Farm Workers (UFW) brought suit against the state alleging Cal/OSHA, California’s worker safety division, had failed to adequately inspect farms for heat illness preparedness and investigate complaints against employers. The parties settled this spring, with Cal/OSHA agreeing to “refocus its enforcement of heat-related regulations covering farmworkers, audit those activities, and make complaints more accessible to the public,” according to news reports.

The UFW hopes progress made in California can be replicated around the country, but it’s not looking good. Employers have to be prepared to care for sick workers, and often they’re not. A report by the Center for Disease Control supports the claim, stating the farms aren’t ready for the eventuality of a worker falling sick from the heat. Only in California and Washington state are farms required to provide shade for workers, and farms that provide paid breaks are the exception, not the rule, Ruiz says. Some employers don’t provide water, or make access to it difficult, according to data from the National Agricultural Workers Survey. 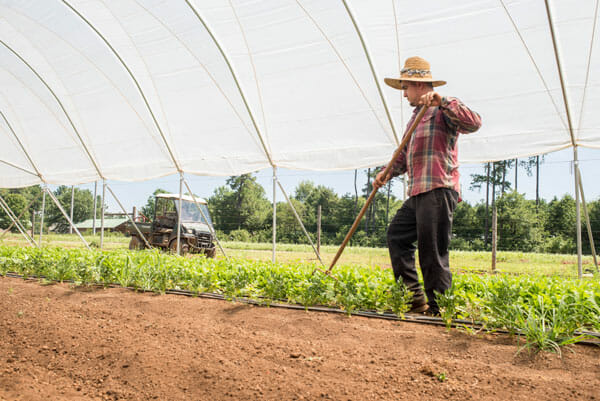 Orlando Gutierrez scrapes away weeds between beds of greens at Woodland Gardens near Athens, Ga., on Wed. June 22, 2015.

Often, it’s new farmworkers who fall victim to the heat. Workers who aren’t accustomed to labor in the elements must be acclimatized, the CDC suggests. “Among those workers, it’s important they be given frequent rest breaks,” Ruiz says.

Unfortunately, farmworkers are often incentivized to neglect their health. On farms that pay workers by a piece harvest rate and not by the hour, advocates say, workers feel pressure to skip breaks to maximize their wages.

The sweltering plight of crop workers is aggravated further by substandard housing conditions. Often, workers reside on or near the farm where they’re employed. Research conducted by North Carolina’s Wake Forest University found that more than half of field workers studied had no access to air conditioning in their dwellings. A majority of workers – even the lucky ones with window AC units – reported needing electrical fans to lower indoor temperatures. Overall, evening indoor heat indexes in the homes of ag workers far exceeded safe levels, researchers found. Such heated conditions can affect sleep and make recovery from a hot day impossible. And sleep-deprived, overheated workers are more accident prone in the field, researchers warned.

Ruiz says she’d like to see California-style regulations and enforcement – which includes employer-provided shade, easy access to clean and plentiful water and a required 10-minute break for every two hours in the field – practiced nationwide: “Otherwise, you’re just relying on the OSHA standard that requires sufficient drinking water, but no regulations about shade or rest breaks. If you want to protect more workers, you need to see a national regulation,” she says. 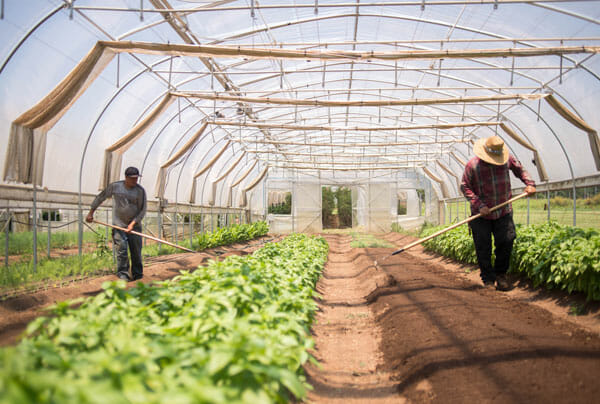 At Woodland Gardens, utility carts and trucks carrying water-filled coolers accompany workers as they move about the land. Shade cloth is strung between high tunnel hoop houses, offering a safe place of respite from the sun. Gutierrez and his co-workers hustle, working from early in the balmy Georgia morning to the sauna-like dusk. With only a few accommodations from their boss – water and shade – their long day of toil is tolerable.

One worker is comfortable enough to joke about how exhausting the summer weather can be: “Tonight we’ll drink many cervezas.”