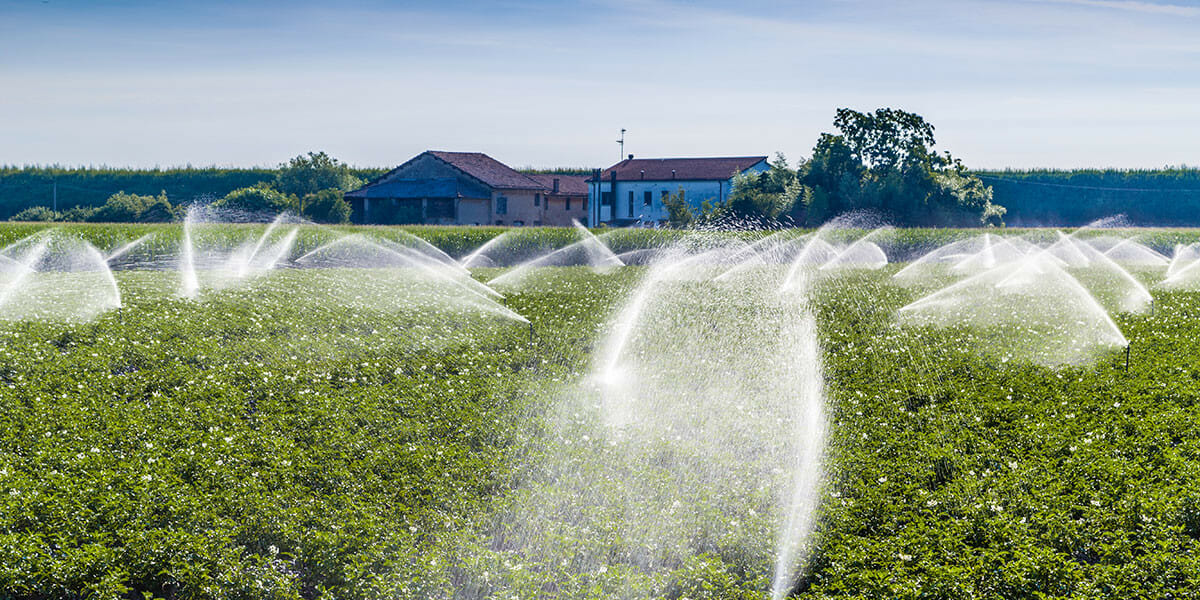 What falls from the heavens is the first thing to consider when planning an irrigation system. For growers in southern Florida, where summer afternoon thunderstorms are a fact of life, an irrigation system may not be needed. In southern California, however, no gardener in their right mind would plant anything without first installing a reliable watering system.

Consider where you are along the spectrum between those two extremes and plan accordingly. If you live in a place where summer rainfall usually occurs at least once per week, buckets, hoses and sprinklers may get you from one rain event to another and serve as a safety net during the occasional longer dry period. But if you end up needing to water multiple times per week, dragging hoses and buckets around will get old pretty fast. Instead, you’ll want to consider installing something more permanent, efficient and automated.

Installing a permanent irrigation system may be your biggest farm or garden expense. Your first choice should be whether you install pipes underground. It’s more work (and expense) up front, but underground piping is not exposed to the rays of the sun, which degrade both plastic pipes and rubber hoses within a few years.

However, it’s easy to lose track of exactly where your underground pipes are, leaving them vulnerable to damage when you’re tilling up a new area. Always make a map of where you lay pipes and bury them as deep as possible – at least 18 inches for main supply lines and 9 inches for secondary lines.

If you are a backyard grower or small-scale market gardener in an urban area, tapping into the municipal water supply is the easiest way to get started. Outdoor faucets are required by municipal codes to have a ‘backflow prevention device’ to keep irrigation water from mixing with drinking water, so any existing outdoor faucet should have this. If you’re tapping into the main line between the street and the house, however, you’ll need a licensed plumber to install this part for you.

Using municipal water makes things easy, but if you’re irrigating more than a quarter acre it gets pricey, and the available water pressure may limit how efficiently you can irrigate.

Rural properties with larger irrigation needs generally rely on well water, which means you’ll likely need a storage tank and a pump. It’s possible to use an on-demand pump to take the water straight from the ground and into the irrigation system, but only the best wells produce enough water for that to work. Instead, many irrigation systems pump water slowly from the well and store it in a tank for use when needed. Ideally the tank can be placed at the top of a hill to supply the irrigation system via gravity.

Installing a functional irrigation system takes plumbing skills and knowledge of your crops. There is no easy formula to figure out how to put it all together, but here is brief glossary of common components and their applications in irrigation design.

Pumps ”“ centrifugal pumps are the most common and reliable type, but they shouldn’t be allowed to run dry or they will burn up. If you want to use solar power for your pump, using a DC (direct current) model greatly simplifies the wiring, though the output is much lower than an AC (alternating current) pump.

Tanks ”“ polyethylene tanks are long-lasting, easy to install and economical for storing large volumes of water; ferro-cement tanks can be built by hand in more decorative shapes and are cheap (but labor intensive); pressure tanks, which create a constant pressure directly from a well (eliminating the need for a storage tank), are a common component of small-scale irrigation systems.

Valves and Timers ”“ fully automated irrigation systems rely on a computerized timer to open irrigation valves according to a schedule. Timers are typically housed in a weatherproof box connected to a series of valves with low-voltage cable; the valves are located between the source of the water and the system of pipes that distributes it.

Piping ”“ rigid PVC piping is the most common conduit for distributing water around a farm or garden. It needs to be buried to keep UV rays from degrading it, but can last for decades. Use it for all main irrigation supply lines.

Tubing ”“ flexible polyethylene tubing is most often used for secondary lines off main PVC lines to deliver water to the plants in drip systems; it is resistant to degradation from UV rays, so it can be used aboveground and moved when needed.

Filters ”“ well water has particulates that can damage sprinklers and emitters, and even municipal water should be filtered before using in a drip system. If needed, filters are installed between the pressure regulator and the main supply line.

Sprinklers ”“ sprinklers spray water into the air and are capable of covering a lot of ground for the cost involved. However, they are less efficient than drip emitters (some of the water is lost to evaporation or simply blows away in the wind) and many crops are prone to fungal diseases when their leaves are kept moist. Sprinklers may be supplied directly by PVC pipe, flexible poly tubing or with a garden hose.

Drip Emitters ”“ designed to deliver water directly to the surface of the soil at the base of each plant, drip emitters make extremely efficient use of water, but are more costly and complex to install. They are usually supplied by poly tubing.

The vast majority of food crops are satiated with an average of one inch of water per week during the growing season. That’s equivalent to turning on the average sprinkler for about an hour. How often you actually need to irrigate depends on the crop. Tiny seedlings in 90-degree weather will need that inch divvied up into daily increments, while large established fruit and nut trees are fine with getting one deep soaking every three or four weeks. Berry bushes, herbs and more mature vegetable plants fall somewhere in between. Very little irrigation is needed if daytime temperatures stay below 65 degrees, but water requirements double for every 10 degrees above that, especially in sandy soil, which requires much more frequent irrigation than clay soil.

Rather than worry about calculating all that, get in the habit of sticking your finger in the soil every day. If the top inch of soil is dry, it’s time to water. Of course, some crops are more drought-tolerant than others and can tolerate dry soil to much greater depths for temporary periods. Figs, grapes, olives, lavender and other Mediterranean species are known for their high level of drought tolerance, for example. But by practicing general water conservation strategies, and building an irrigation system that delivers just the right amount of water exactly when plants need it, it’s possible to ratchet down the water use of any food production system.

it is said that overhead irrigation loses 50% of the water due to evaporation. That means if a farmer uses $2 million ..than $1 million went up in smoke..it did not do the job. So farmers are wasting half of their water to grow. I have developed in the last 5 years an underground watering system that completely eliminates that 50% water lost. My underground watering system is very simple to operate…no mechanical parts underground, no pressure built up and uses 100 % of the water used for irrigation. Eliminates the purchase of heavy expensive watering systems that are in… Read more »

Thanks for pointing out that for irrigation systems on rural properties you’ll likely need a storage tank and a pump. My dad is thinking about buying farmland and he’s trying to figure out what he would do to water everything he wants to grow. I think it would be smart for him to talk to an expert about what type of irrigation he should use and what pumps and tanks he should get as well.

Thanks for mentioning that creating a solid irrigation system requires plumbing skills and knowledge about crops. My husband and his brother want to venture into farming. They’ve found some good areas that would yield good crops, so hopefully they can find some great irrigation equipment to help them be successful.