The Fog of Farming

No, thanks. We don't need free pesticides. 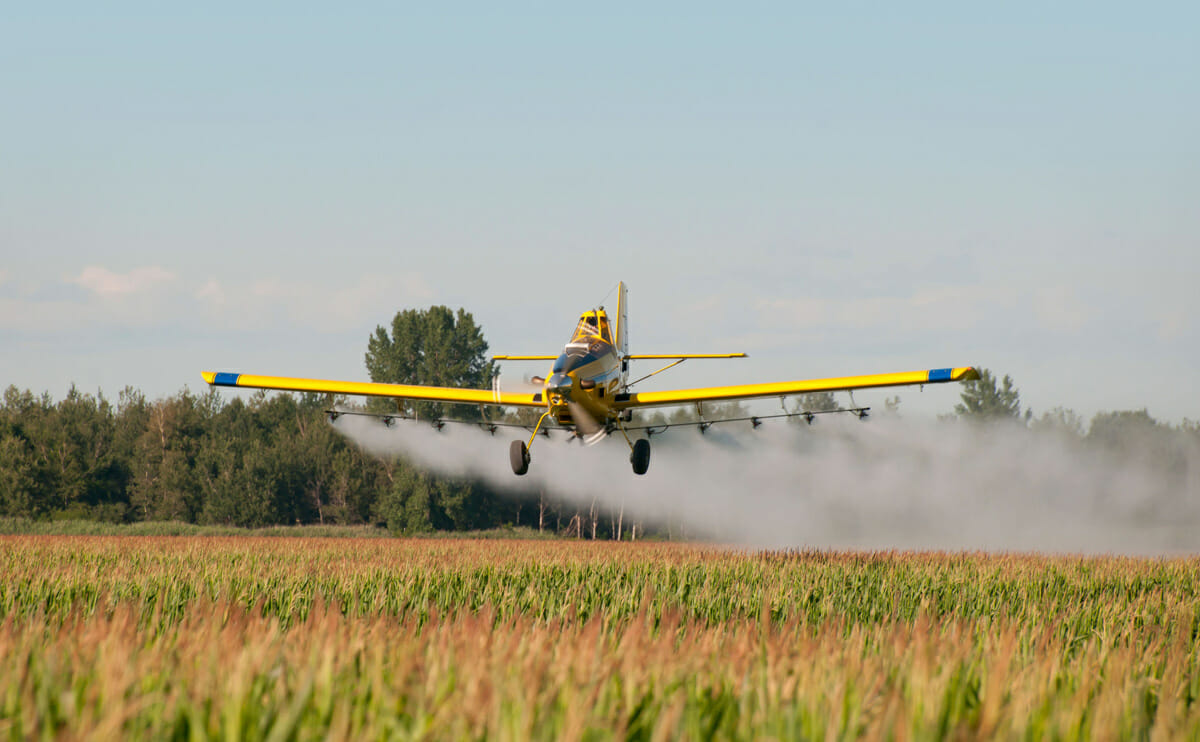 In some places today, that might still be the case. Unless, of course, you are an organic lettuce and vegetable farm sitting in the heart of corn and soybean country, like Let Us Farm, an eight-acre farm near Geneseo, Illinois. “When they talk about crop diversification here, it means corn and soybeans,” says owner Randy Hoovey with a laugh. “I didn’t really think it through much about what it would mean to be right in the middle of that.”

It means that Hoovey’s prized organic vegetables are surrounded by commodity crops that are regularly sprayed with the world’s best-selling herbicide, glyphosate, of Round-Up fame (or infamy, depending on your point of view). Given that any crop not engineered to withstand the effects of glyphosate will die if it gets sprayed (and Hoovey, or any other grower, would lose organic or similar certifications), it is not a particularly comfortable location.

Hoovey’s fields were first hit in 2010, when a neighbor’s application drifted over and killed all of their potatoes. Two years later, Randy, his wife Lee and an employee were in the field when an applicator truck pulled up and prepared to spray adjacent cornfields, despite a 30-mph wind blowing toward their eight-acre farm.

“I said, ‘Hey, guys, we’re organic, you can’t do this.’ These guys don’t get organics at all, they give you a deer-in-the-headlights look. They said, ‘Well, hey, we’ll be spraying all around you all day.’ I said, `OK, but I’ll be calling the Department of Ag,’” says Hoovey. They called their dispatcher, who sent them elsewhere, but they were back spraying early the next morning and still-high winds drove “huge white clouds” over Hoovey’s lettuce.

Let Us Farm lost all of its peas, artichokes, approximately 10,000 lettuce plants, and a stand of trees.

Let Us Farm lost all of its peas, artichokes, approximately 10,000 lettuce plants and a stand of trees. The Illinois Department of Agriculture came out within two or three days to take samples. “They found residue on everything,” Hoovey says. Armed with this evidence, the Hooveys tried to hire a lawyer to recover damages but came up empty; the first one cited a conflict of interest, a second one never returned their call.

Then they discovered the Farm-to-Consumer Legal Defense Fund (FTCLDF). Since its founding in 2007, FTCLDF has been known primarily for defending raw milk producers and advocates, but general counsel Gary Cox says “drift” cases like Hoovey’s are one of its fastest-growing types of legal case. So far, FTCLDF has won substantial settlements from pesticide applicators’ insurance companies in three of five cases without having to go to trial. Two other cases, involving a Texas winery and a 50-year-old Michigan flower business, are likely to go to court, and could be the biggest settlements so far, he adds, noting that they have the same incontrovertible evidence of overspray and resultant business losses. “The lady in Texas took a video of the airplane and had pictures pre- and post- of her vineyards, which are now all dead,” Cox says. “In our cases, the clients were out in the field and saw the spray, the mist coming right onto their property.”

Cox says all three settled cases claimed negligence, arguing that the sprayer breached a duty not to cause harm, trespass, or make an unwanted intrusion and cause damage; or committed negligence per se, which means the chemical applicator violated the state’s pesticide laws. “Each state we have been in has a pesticide program that regulates the chemical applicators. One of the requirements under the pesticide program is `don’t spray when it’s windy.’ They were trying to claim that it wasn’t windy, so I got meteorological data to prove they were lying,” Cox says.

Most importantly, he says, “In the three cases we resolved, the client was smart enough on the day of the overspray to contact the State Department of Ag to log a complaint, and they came out and collected tissue samples they sent to the lab and detected the presence of glyphosate. In Illinois, the Department of Ag sent a letter to the applicator saying they had violated the law. There are lots of ways to do this, you just have to have the evidence.”

Ted Feitshans, an extension professor and agricultural law expert at North Carolina State University, agrees. “If you have an overspray and can prove that it was the chemical that produced your damage, it’s an open and shut case. The hardest part is proving that someone’s violation of the label was the chemical that damaged their field. Most farmers wait too long to contact officials, and by the time they get out there there’s nothing left,” he says.

Cases with such clear evidence hardly ever get to trial because insurance companies, facing a nearly inevitable loss, choose to settle. That makes it harder to determine how many such incidents are occurring, Feitshans adds. Nonetheless, he believes such cases are rising and will continue to proliferate, driven by the growing problem of glyphosate resistance among commodity crops. That resistance is causing many farmers to switch to chemicals that are more drift-prone than glyphosate. In fact, says Feitshans, very few chemicals are as safe as glyphosate in terms of drift; it typically has to be sprayed on the wrong farm or in high winds to create an overspray issue.

“The grower has to be concerned with timing because it affects drift and they can do much more for drift reduction by applying or using pesticides with technologies designed to greatly reduce off-target spraying,” says Wayne Buhler, an extension professor of pesticide safety and education at North Carolina State, who trains farmers on its use.

To that end, the U.S. Environmental Protection Agency announced its Drift Reduction Technology (DRT) program in October. The voluntary DRT program encourages manufacturers to test and label their products with a one- to four-star rating that indicates the rate of drift reduction. Pesticide eradication advocates, however, say the increased use of drift-prone pesticides and lack of attention to existing label instructions mean that the voluntary program is not likely to make much difference.

While noting that Round Up and other agricultural chemicals have been more rigorously tested than many other consumer products, Buhler says their use is ultimately a question of good judgment. “We should use them on an as-needed basis. The farmer needs to go and investigate whether the pests are there to warrant the use of pesticide, rather than just flipping the calendar and spraying because it’s that time of year,” he says.

Winning a case of GMO “pollen drift” faces the near-impossible task of identifying the originating farm (not to mention the considerable risk of incurring the wrath of Monsanto’s patent attorneys). But organic farmers can get legal protection from pesticide drift if they carefully document oversprays and such cases can contribute to diversifying an agricultural zone. At Let Us Farm, for example, Hoovey’s neighbor planted a 100- to 200-foot buffer between them of alfalfa, which is rarely sprayed. It just goes to show that in farming, good buffers make good neighbors.