Research suggest that baited traps act as lobster fertilizer. Is that a good thing? 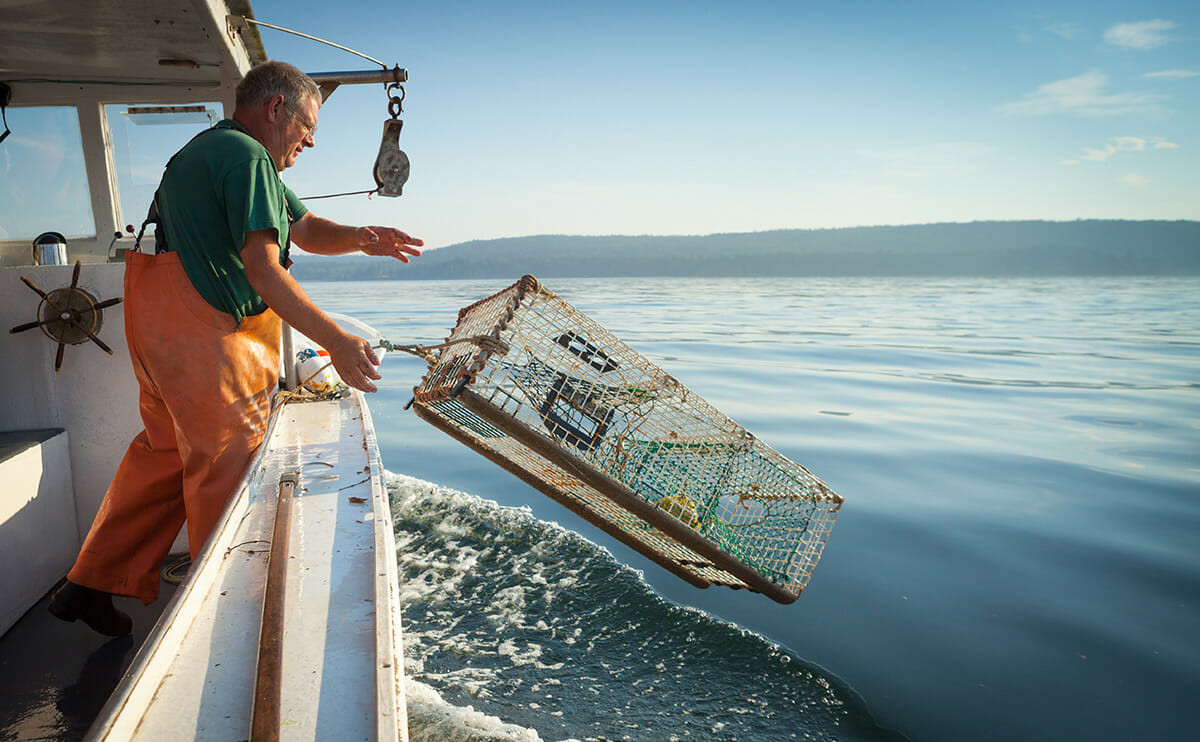 What explains the spike? Scientists and lobstermen credit a combination of factors, from warmer waters to the disappearance of predators to voluntary conservation measures. “It’s one of those complicated stories without a single explanation,” says Patrice McCarron, executive director of the Maine Lobstermen’s Association (MLA). “Anyone who claims to know exactly what’s going on is either arrogant or lying.”

Despite the uncertainty, though, one of the most intriguing theories is supported by a solid body of evidence. The big idea: That lobstermen have less in common with fishermen than with farmers, cultivating their undersea crop with steady infusions of fertilizer – and, like any large-scale agricultural operation, changing the ecosystem in which they operate.

To understand why, you need to know something about how a lobster trap works. It’s a simple but effective device, a labyrinth of hoops and mesh designed to funnel the critters from a “kitchen” – the first compartment, where the bait, usually herring, is hung – into a second, inescapable chamber called the “parlor.” In practice, however, there’s not much preventing lobsters from entering the kitchen, grabbing a herring snack, and heading out the way they came in.

“They move in three dimensions easily,” says Win Watson, a zoologist at the University of New Hampshire. “It’s not rocket science for them.”

Lobstermen have less in common with fishermen than with farmers.

Watson would know. Around 2000, the scientist noticed something curious: The number of lobsters caught in his research traps didn’t match the number spotted by scuba divers. What was going on down there? To find out, Watson jerry-rigged a video camera – “some really funky engineering” – and sunk it along with a trap. When he watched the grainy recordings, he discovered the animals were adept escape artists: Just 6 percent of the lobsters that entered the trap stayed inside. The rest would take turns entering and exiting to nibble the enclosed bait, “like birds around a feeder.”

Homarus americanus, it was clear, was dining and dashing. But what did that mean for lobstermen?

It fell to another scientist, a marine ecologist named Jon Grabowski, to answer that question. Grabowski, then with the Gulf of Maine Research Institute (today he’s at Northeastern University), had long heard lobstermen speculate that they were effectively farming their catch. Big lobsters were escaping traps, small ones were being thrown back with stomachs full of herring, and lobsters of all sizes fed on wads of discarded bait. “Lobster farming was one of those things that was widely believed by the industry, but there hadn’t been a ton of research,” Grabowski told me.

To test the idea, Grabowski looked to the waters around a rocky speck called Monhegan Island, where every year the lobster fishery closed for six months to let its quarry grow unmolested. Sure enough, when he compared Monhegan lobsters to their counterparts from more densely fished areas, he discovered that lobsters with year-round access to traps grew a full 15 percent faster. (Unsurprisingly, they also had more herring embedded in their tissues.) The free lunches weren’t producing more lobsters, but they were making the existing ones grow faster – and reach harvestable size sooner, contributing to lobstermen’s prodigious hauls. Herring was acting as a sort of Miracle-Gro.

When Grabowski crunched the numbers, he found the inadvertent applications of fertilizer were augmenting Maine’s lobster landings by up to $25 million a year – equal to the value of New England’s vaunted cod. Accidental farming doesn’t explain the lobster boom by itself, but “it adds up to a substantial uptick in a very important fishery,” Grabowski says.

Though many in the lobster industry ascribe to the farming theory, MLA’s McCarron isn’t one of them. The nearby Canadian fishery, she points out, has stringent trap limits – but has still benefited from the same abundance. Of all the factors influencing lobster catches, she says, “bait is probably at the bottom of the list,” if it ranks at all. (For its part, Grabowski’s paper points out that environmental differences in Maine and Canada make comparisons difficult.)

The free lunches weren’t producing more lobsters, but they were making the existing ones grow faster.

Whatever their cause, will the good times continue? Perhaps not: There’s evidence that the lobster boom, like housing and tech and Dutch tulips before it, may actually be a bubble. The Gulf of Maine’s rapidly warming waters are helping to fuel the bottom-dwellers’ growth for now, but scientists fear the Gulf will soon get too hot for many species. When the Long Island Sound’s waters warmed beyond a critical threshold in 1999, its lobsters began dying off, and never recovered.

Herring, too, may face long-term trouble. Though Bob Steneck, professor of marine science at the University of Maine, says they’re a hard species to assess, there’s little doubt that the silvery forage fish have been hit hard by industrial trawlers. “The vast majority of herring caught in Maine ends up in traps,” Steneck says. “Today we have more lobster traps in Maine’s waters than people in the state.”

To the mind of Steneck, who in the 1980s calculated that lobster diets consisted of 80 percent bait, the situation in the Gulf of Maine has come to resemble a monoculture, and lobsters the cash crop that has trumped all other fisheries. He’s quick to add that the lobster industry, which he says has “one of the strongest conservation ethics on the planet,” isn’t to blame. But while the monoculture isn’t lobstermen’s fault, it might turn out to be their problem: what happens when the boom goes bust?

To forestall such a crisis, Steneck would like to see Maine diversify – ease up on lobster, maybe, and develop industries around new species, like black sea bass, now flourishing in the warming gulf. But as long as lobsters remain cash cows with claws, it will be tough to branch out. “When you realize 80 to 85 percent of all marine resource value in Maine comes from a single species, you realize how precarious it is,” he says. “We don’t have a Plan B.”