Pot comes out of the closet. 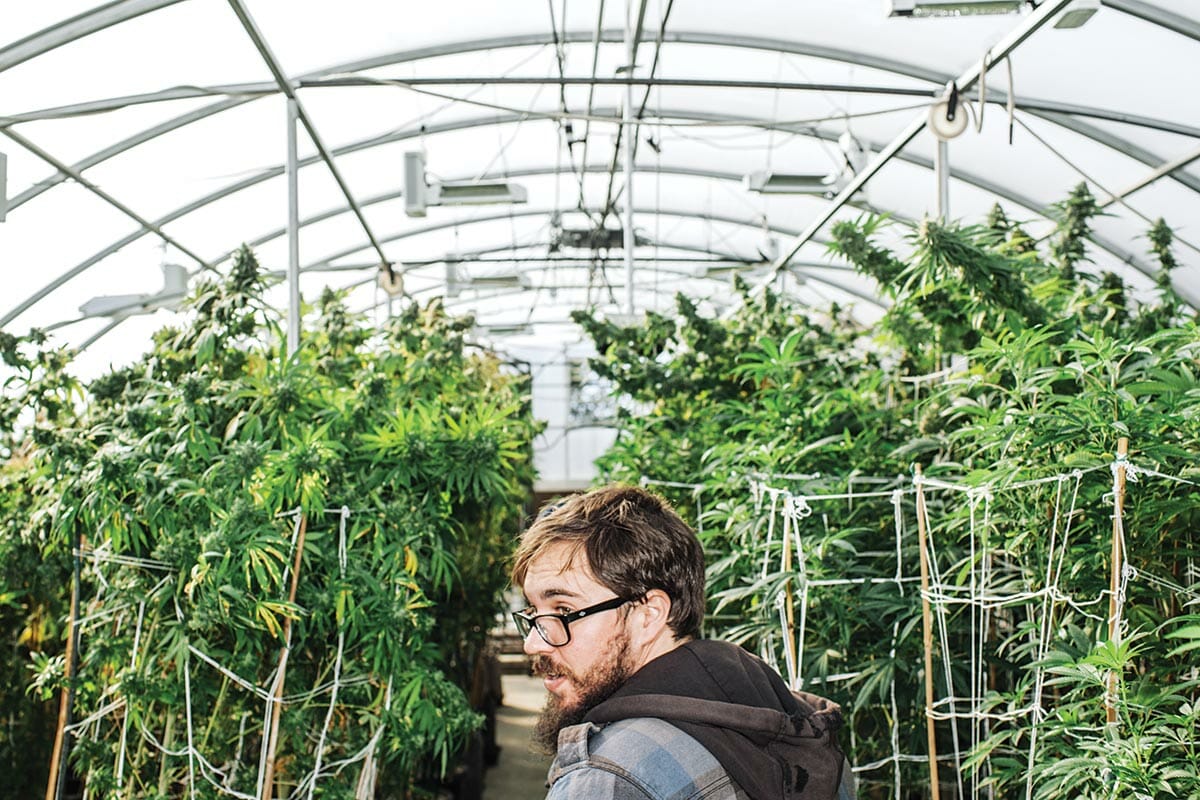 Tim Beall came to the marijuana industry as an outsider, and that’s a good thing. The COO of the Denver-based company GrowCo, Beall is a greenhouse vegetable farmer by trade, which he believes gives his company an edge in Colorado’s year-old market for recreational marijuana. Colorado is flush with growers ready to explain what makes a dank bud quite so dank, but those ready to speak on greenhouse cooling systems are harder to come by. As he explains, “We looked at guys used to working in their closets or basements and said, ‘Hey, let’s help some of these indoor growers learn a different way to grow.’ ”

Growing pot in Colorado is not new, but legal growers have been supplying the recreational market for less than a year. The state’s pot growers are struggling to meet the market’s demands: The Marijuana Enforcement Division (MED) – which regulates the infant industry – estimates residents and visitors 21 and over consumed 130.3 metric tons of marijuana in 2014, with only 77 metric tons coming from legal sources. A mix of unregulated and semi-regulated sources such as home growers and illegal imports supplied the remaining 40 percent. To beat back the black market, Beall and others believe pot growers need to adopt the techniques of commercial agriculture.

High taxes on recreational weed are one impediment to legal growers. In Denver, a combination of state and county taxes add up to a hefty 29 percent tax rate. But to make legal weed competitive, Beall doesn’t think lower taxes are the answer (look at highly taxed tobacco). He says the market needs a more cost-efficient means of production.

But Colorado is still in its experimental phase with legal marijuana. Sun-grown, cheap weed for the people sounds like a progressive utopia, but is the state ready for commercial-scale marijuana farming?

Companies like GrowCo are the latest chapter in Colorado’s ongoing saga with legal marijuana production.

The first act began in 2000, when Colorado voters approved medical marijuana, giving rise to a network of home growers, caregivers and small dispensaries growing cannabis for a select number of patients. Act two arrived on January 1, 2014, as another voter-approved amendment paved the way for licensed recreational marijuana shops (Washington State followed suit shortly after). Locals and tourists streamed in with 21-and-over IDs – their golden tickets to a Willy Wonka-esque world of legal pot products.

Still, growing for the recreational market remained moored to its medical past. The state only allowed existing medical dispensaries to apply for public sales and tied the size of each recreational shop to the number of medical patients it served. What’s more, the MED dictated that shops grow 70 percent of the weed they sold in-house so regulators could easily watch marijuana go from seed to sale.

Act three started last fall, when the MED drafted new regulations for pot growing. Initial proposals attempted to limit production, fearing that cheap marijuana would end up in the wrong hands. “If there is overproduction, then there is an incredible incentive for people to take it to other states and sell it,” explains Mike Elliott, Executive Director of the Marijuana Industry Group, a trade association for cannabis businesses in the state.

Precisely because greenhouses promise higher yields at a lower price, initial MED proposals allowed warehouses ‘to grow twice the number of plants as greenhouses. “This is agriculture,” says greenhouse advocate Greg Duran. “We are forced to do agriculture indoors not because it is the best way to grow a plant but because of prohibition.”

Ultimately Duran’s view won out: final rules put the cap at 3,600 plants for both indoor and outdoor growers new to the market.

The Greener Grass of Greenhouses

‘The new rules provide growers with a bigger, brighter stage. GrowCo recently leased two 90,000-square-foot greenhouses in Pueblo County, about 100 miles south of Denver. (That makes each one about the size of two football fields, minus the end zones.) Local commissioners haven’t approved the operations but are eager to bring the industry to an area reeling from the loss of steel factories.

Large greenhouses are a major shift from the status quo. Growers transitioning from the medical and black markets have largely continued to grow indoors. GrowCo estimates that, as of last fall, about 95 percent of legal growers worked indoors.

Indoor growing has advantages. Warehouses keep cannabis out of sight (and smell), and controlled climates and artificial lights mean growers can pull in four or five harvests a year. Yet those benefits often come with five-figure monthly energy bills, not to mention the environmental cost. A report from Energy Policy estimates the national production of warehouse weed creates the same carbon emissions as three million cars.

Growing outdoors could prove more cost-effective and sustainable, but security concerns have hampered approvals in Colorado. Unsurprisingly, Beall sees greenhouses as the happy medium between indoor and outdoor techniques. Translucent plastic siding gives growers both climate control and sunshine. With the help of computer-controlled shades and supplemental LED lighting, Beall believes greenhouses can achieve multiple harvests that double or even triple the yield of a comparable indoor operation.

Van McConnon, another cannabis cultivation consultant, told the Marijuana Business Daily that, each year, a greenhouse will cost 33 percent less to operate than an indoor operation of the same size using high-pressure sodium lights – the standard system for indoor growing. No wonder a Denver grower told him indoor facilities are “the noose that will hang a lot of growers.”

From Swag to Schwag?

Duran believes that if greenhouses take off, consumers can look forward to drastically reduced prices. “We could be seeing weed at 50 bucks an ounce,” he predicts. That would put an eighth of an ounce of medium-quality weed, which averages $25 on Colorado’s current recreational market, at just $7.

Still, not everyone is going greenhouse yet. At The Farm in Boulder, Colorado, owner Jan Cole has created a pot shop where attentive staff and chic décor put customers at ease. Cole brags that her shop once served four generations of a single family.

Like many retailers in the state, The Farm has shed the stoner image to focus on quality products and attract affluent consumers. A flood of cheap pot could dampen those efforts. Devin Liles, Cole’s VP of Production, grows the store’s pot in small “flower rooms” that eliminate the need for pesticides. She knows commercial operations could drive’the industry, but won’t shift to a sunlit system that relies on chemicals. “I am a mom and I want it to be clean, whether it’s kale or cannabis,” says Cole. 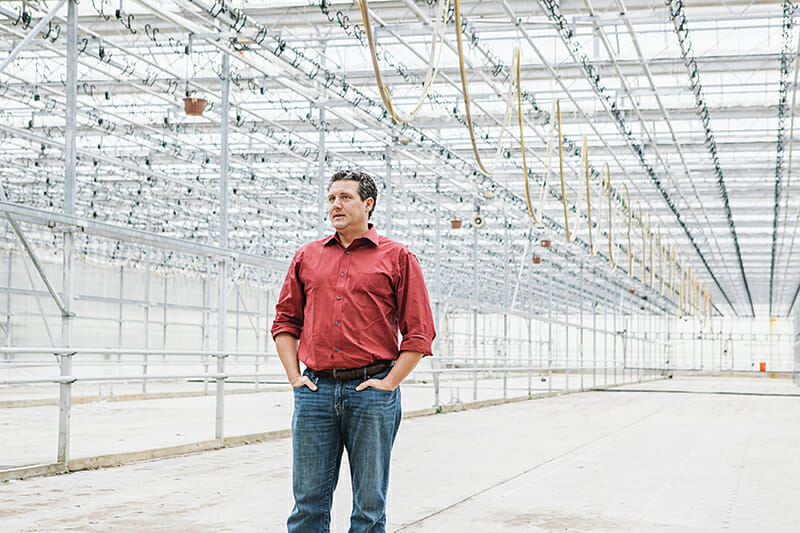 For now, Cole believes some consumers will pay more for better marijuana just as they pay more for organic produce. “People have been growing tomatoes for a long time, but now tomatoes don’t taste that good anymore,” she says. “We want to be the ones still making and selling the really good tomatoes.”

Duran doesn’t see the future of pot production as a contest between massive greenhouses churning out cheap pot and small, indoor operations like Cole’s. He advocates for a “craft greenhouses” legal distinction that could play a parallel role to craft beer brewers. He points to Tucker Eldridge, Master Grower at Nature’s Herbs and Wellness in Garden City, Colorado. Rather than employing one massive operation to meet production needs, Eldridge supplies the retail outlet in part with two 3,000-square foot greenhouses that help him control his growing environment while limiting pests and diseases.

Eldridge sees controlled operations as a smart move, especially if another state legalizes, siphoning off Colorado’s pot tourists. “Colorado is at its peak consumption now,” he says, and he doesn’t want to end up stuck with too much growing space.

Eldridge’s strategy could be a turning point if closet-grown weed goes the way of bathtub gin. Pot has sold itself for so long that it’s hard to imagine demand for cheap, legal weed having limits. Showing sobriety in a time of market highs could be the first sign of a true farmer.

Why just smoke pot when you could dab it, sip it or rub it onto your lips? Colorado's potrepreneurs are displaying a wealth of cannabis creativity.

Lip Gloss
Apothecanna’s Lip Buzz pairs one of the worst parts of living in Colorado (dry lips) with one of the best (legal marijuana). The company claims the THC in its lip gloss serves as an effective treatment for cold sores. apothecanna.com

Brownie Mix
If Betty Crocker fell in love with Willie Nelson … we’ll just leave that joke where it is. Point is, the At Home Baked brownie mix offers an easy way to put a homemade touch on the classic pot brownie. athomebakedcolorado.com