Farm Confessional: I Believe in the Healing Powers of Donkeys

With a concept of care farming, some donkeys can turn a farm into a relieving place for people. 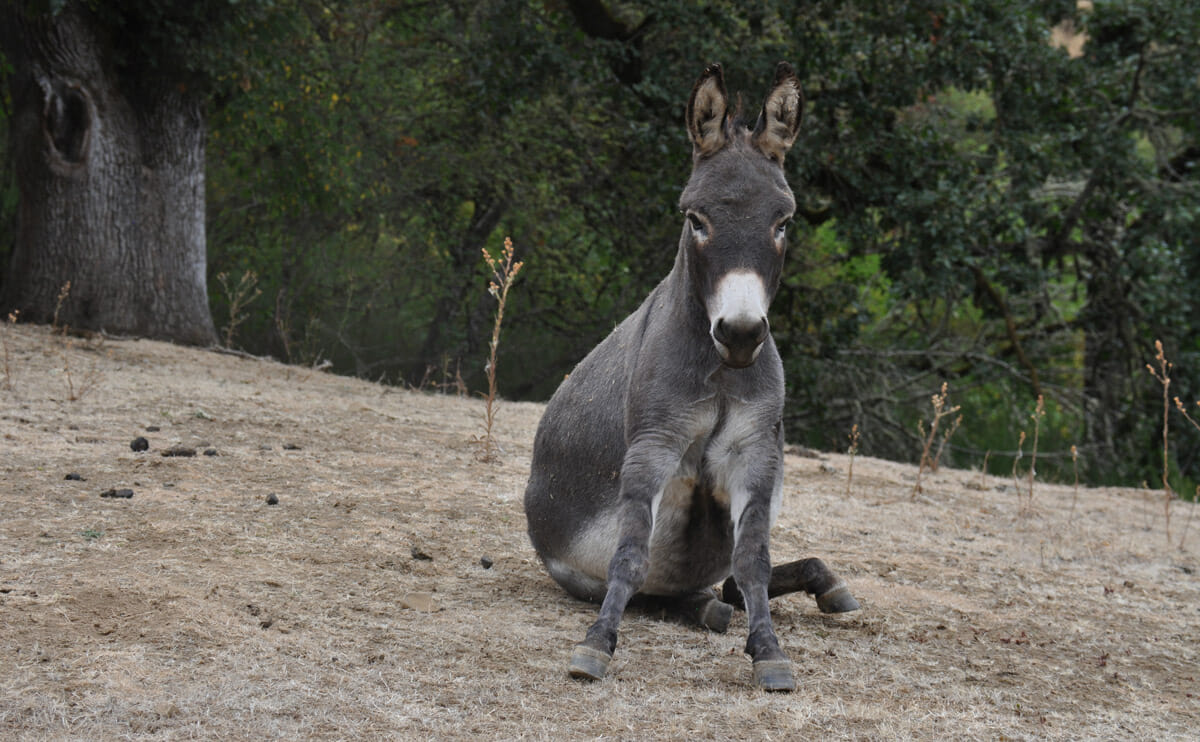 Some farms might scoff at an animal whose sole purpose is to eat Teasel weed and share his magical healing powers with guests. But after watching our donkey Pino, I’m not one of them.

We began our farm with Katahdin sheep, two goats and 4,000 lavender starts. But within that first year, I became enamored with donkeys. While donkeys can be used as guards, I told my husband a donkey would save us huge amounts of money and time by becoming the Lead Weed Eradicator. And when we got our donkey, Pino, he did.

But there was a bigger role that would emerge for this little donkey. The idea occurred to me each time I had special moments with him. If you’ve spent time with donkeys, even trained donkeys, you know they do most things very slowly, one hoof at a time. On one particular day, in a hurry, I needed to move Pino to another paddock. He stood, like a statue; I sighed an impatient sigh, and suggested he get going with a tug and a push. While his ears pricked backwards to hear my plea, they then returned forward, pointing toward the lower pasture. I stood with him in silence to observe the fog blanket coating the grass and weeds on our lower fields, with the white dots of our sheep peeking out. What a beautiful, calm sight. Then Pino’s ears pricked another way, he looked up, and so did I, just in time to see a flock of ducks flying in formation, gone in seconds.

I never would have experienced that moment if it hadn’t been for those donkey ears pointing the way.

Those moments with Pino inspired me to consider our small farm not only as a place that could sustain us, but also a respite for both animal and people. The idea of “care farming” is better known and utilized in Europe, especially in England, but I was first introduced to it when I adopted a pig and a crippled goat from Sanctuary One in Ashland, Oregon, some five hours from our farm. Over the past 10 years, I’ve visited Sanctuary One several times and consider them a role model of true care farming.

Care farming recognizes that there is a reciprocal relationship between land, people and animals.

Care farming recognizes that there is a reciprocal relationship between land, people and animals. While people and animals nurture and improve the soil and land, the land gives back with food. But both animal and caretakers are also helped emotionally and physically. Many care farms also raise some animals for meat, while others take a vegan approach. Some care farms invite war vets to come and help with tasks on the farm to help alleviate post-war syndromes or teach children about farming. Here at our farm, I have a soft spot for elders – both human and animal. I have been bringing people here for one-on-one care visits with Pino the donkey and the many adopted elder barn animals (I call them The Misfits).

Obviously, taking time out from farming to provide time for these care visits will not work for all farms, but we find that not only do guests learn a lot while they are here, they also build an enduring connection to the farm.

It’s true, none of our four donkeys plow or pack. They guard in their own way, but are not technically used as such for our flock (we have Maremmas for that). And the donkeys require care, including farrier work (hoof trimming and shoeing), annual shots and the routine and emergency expenses of any equine.

But after watching all ages come to the farm and lay hands on their first donkey, I’ve come to see Pino’s role, and the role of all the animals here, as quiet ambassadors of internal peace. If a person can be calmed even for an afternoon by one donkey, that is a gift I am willing to support.

Pino’s talents can be described as subtle, but if one is watching, they will notice much. I had a request from someone who had suffered a stroke and was relearning to speak. She had seen Pino on my farm blog and wondered if she could come meet him. She arrived with two other friends and we headed to the barnyard. I did not take the woman directly to Pino; rather, we were all in a large circle, and the others were chatting. Immediately, Pino went around the circle, and as others carried on small talk, I watched him gently sniff and examine each guest. And then he went and stood right by the side of the woman who had the stroke. He pressed himself up against her, and remained there through the visit. She later wrote to tell me that day was the best speech day she had had in weeks.

And then there’s the old donkey, Matilda. I have workshops here at the farm where I teach people to observe and then capture the essence of donkeys in drawings. This is where old Matilda has found a following. She was close to 20 when she arrived and had been rescued from neglect: For years, she’d been used as a brood jenny in a cold climate without care, subsisting only on straw. I start each workshop with 30 minutes of silence, letting the attendees mingle, sit and commune – without words – with the four donkeys. When I did this with Matilda, she took herself to each guest, one by one, and stood in silence. Each time her huge ears slightly moved, it was a small sentence. The fact that this donkey still trusts humans is a testament to this species’ charm and determination.

After these workshops I always ask people to point out the strongest memory they will take home with them. By far, the most common answer is, “Matilda’s eyes.”

Popular
7 Smokable Plants You Can Grow That Aren’t MarijuanaBrian Barth
Record-Breaking Egg Profits Prompt Accusation of Price GougingClaire Carlson, The Daily Yonder
Could New York Become the Mushroom State?Sara Foss
6 Differences Between Llamas and AlpacasAndrew Amelinckx
New Solar Panels Allow Farmers to See the LightNaoki Nitta
Explore Modern Farmer
Related
Features, Food Security, Labor
The Rise of Virtual Farmers MarketsLeah Borts-Kuperman
Environment, Labor, Water
California Farms and Farmworkers Attempt to Recover From Record FloodsNaoki Nitta
MTMF, Plants
This Modern Farmer Wants You to Grow a New Potato StrainBevin Cohen
Food Security, Labor, news
A New Egg Co-operative Has Hatched in the Western U.S.Lindsay Campbell
wpDiscuz
We use cookies on our website to give you the most relevant experience by remembering your preferences and repeat visits. By clicking “Accept”, you consent to the use of ALL the cookies.
Cookie settings ACCEPT
Privacy & Cookies Policy