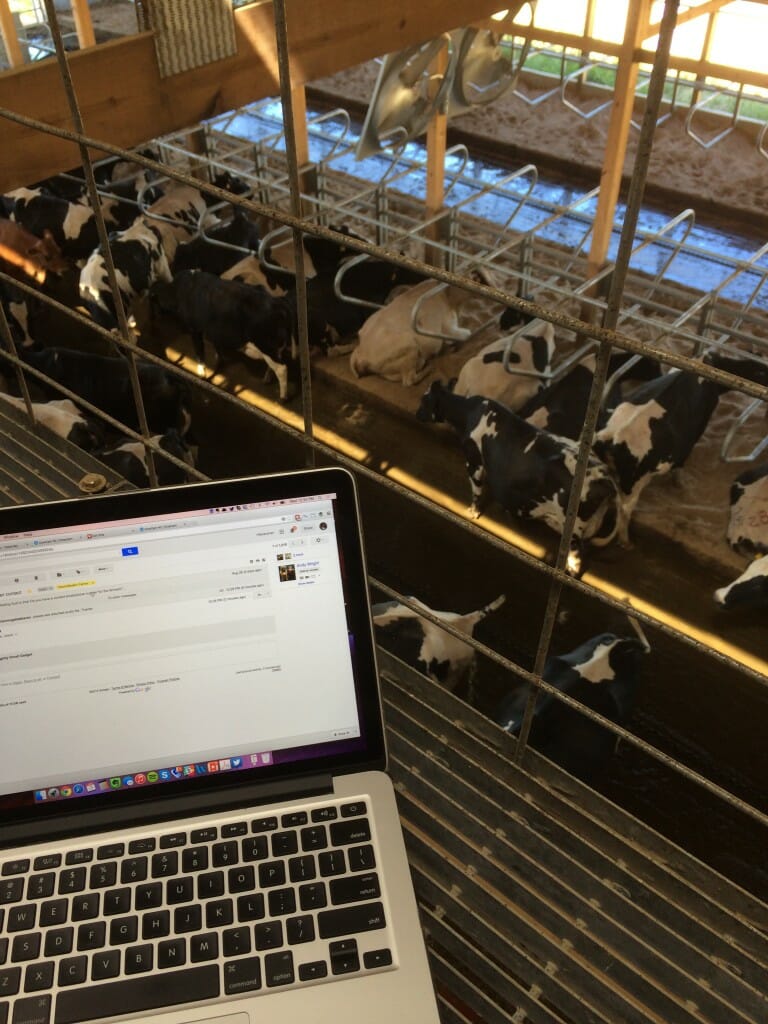 As you can see, there are actually two cameras running — one in a spot where cows relax, use a robotic brush to scratch their back and drink water. The second camera will be in a calving section — cows are brought here during calving or right after. Cross your fingers for some live births this week!

Never Rest co-owner Ashley Schlender filled us in about her farm, the cows and their beautiful robotic barn:

“Troy and I formed the Never Rest Dairy in 2006. At the time we were milking cows in a double six herringbone parlor. Our farm is 165 acres that we own; to have enough feed for our herd we rent about 200 acres as well.

At this time, we are milking 170 Holstein cows in our newly built freestall barn. In this barn we installed two AMS Galaxy Astrea 20.20 robots. Each robot has a robotic arm that prepares and attaches the milking beakers for a box on either side of the unit. We chose this brand of robot because it’s user friendly and had options that allow the cows to acclimate to the new milking environment, such as manual attachment when needed.

Troy and I chose robots over a traditional milking parlor in order to reduce the physical work load and focus on improving cow comfort and well-being. At this time we have been in the barn two months and the cows are adjusting very well. On a side note, we have two children, Trent, age 6, and Duke, age 3, who really enjoy growing up on the farm! Troy is the third generation of his family to farm here on this property.”

Many thanks to the tech wizards at Tuna Traffic for all their help setting up the CowCam. Click here for some behind the scenes footage of their day on the farm.

Popular
Could New York Become the Mushroom State?Sara Foss
The Rise of Virtual Farmers MarketsLeah Borts-Kuperman
7 Smokable Plants You Can Grow That Aren’t MarijuanaBrian Barth
Record-Breaking Egg Profits Prompt Accusation of Price GougingClaire Carlson, The Daily Yonder
New Solar Panels Allow Farmers to See the LightNaoki Nitta
Explore Modern Farmer
Related
Features, Food Security, Labor
The Rise of Virtual Farmers MarketsLeah Borts-Kuperman
Environment, Labor, Water
California Farms and Farmworkers Attempt to Recover From Record FloodsNaoki Nitta
Books, How-To, Lifestyle
How to Turn Your Garden Into a Business, No Matter the SizeEmily Baron Cadloff
MTMF, Plants
This Modern Farmer Wants You to Grow a New Potato StrainBevin Cohen
wpDiscuz
We use cookies on our website to give you the most relevant experience by remembering your preferences and repeat visits. By clicking “Accept”, you consent to the use of ALL the cookies.
Cookie settings ACCEPT
Privacy & Cookies Policy