Are "jellyballs" the next sushi? 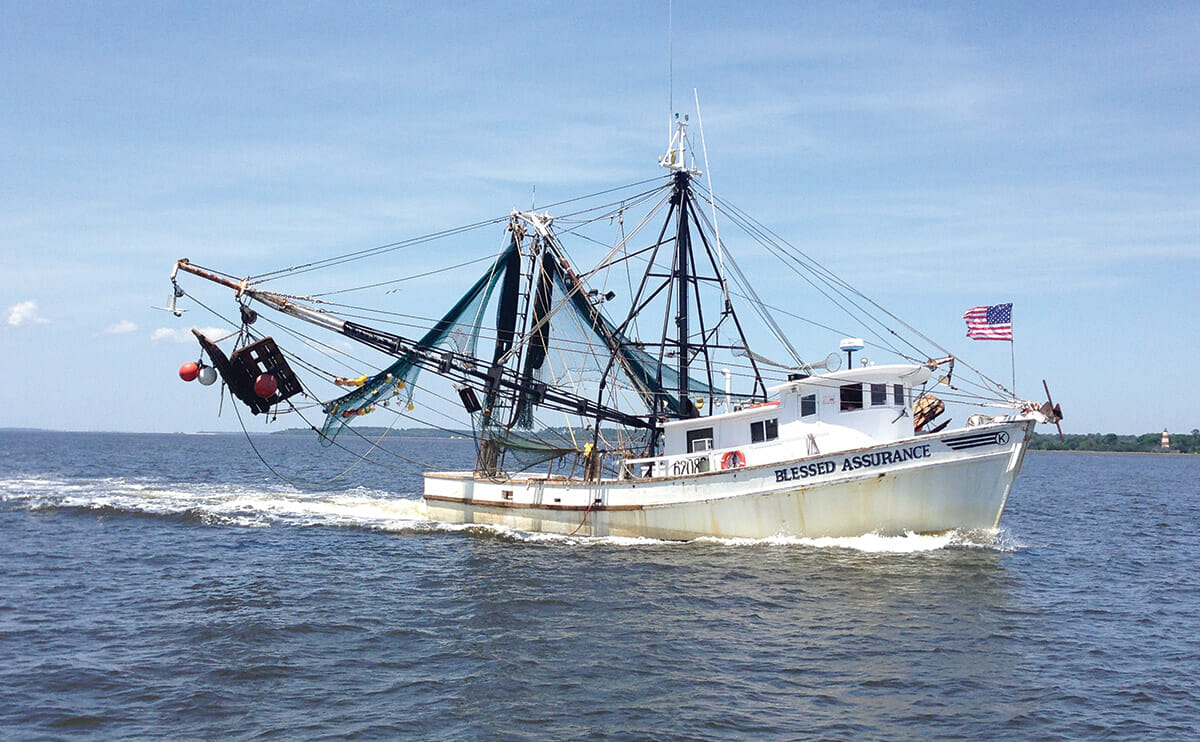 First the bad news: Jack mackerel have been decimated, Atlantic cod populations have collapsed and Mediterranean bluefin tuna are declining at alarming rates. In fact, in recent years some marine ecologists have claimed, controversially, that all fisheries on earth could collapse by 2048. But in the tiny port town of Darien, Georgia, there’s a happier story to be told.

Thornell King’s salty 73-foot shrimp trawler, the Kim-Sea-King, steams down the muddy Darien River, past Sapelo Island’s big red and white striped lighthouse and into the Atlantic. About five miles offshore a crewmate spots, floating near the surface, a mat of gyrating grapefruit-sized globs that stretch the length of five city blocks, a slick so thick it appears as if you could walk on it. 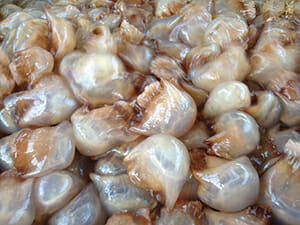 These are cannonball jellyfish. Locals call them “jellyballs.” And they will be dinner.

“Jellyballs have been very, very good to me,” says King, who has worked as a state trooper for the last 20 years, and might be the only jelly-balling cop in the country. This past season was particularly robust: King and his men caught’an estimated 5 million-plus pounds of cannonball jellyfish. At what King says is this year’s price (seven cents a pound), this equates to $350,000. Statistics are absent in this burgeoning new industry, but since King operates three of’ the fewer than 10 boats legally fishing jellyfish in Georgia, and there are maybe a handful in Florida and South Carolina, the market value of the jellies being fished in the U.S. can be estimated at somewhere in the low millions.

National Marine Fisheries Service data for the U.S. suggests 2,152 metric tons of cannonball jellyfish were harvested in 2011, worth $301,000, but the figure doesn’t include confidential data submitted by states, which would likely raise these numbers dramatically, and thus is incomplete.

The cannonball jellies in the waters off the southeastern U.S. are so plentiful that even the Georgia Department of Natural Resources (DNR) doesn’t know exactly how many there are. The main thing holding the industry back is the development of more processing plants.

These brownish Cnidarians (from the Greek knide, or nettle, for their ability’to sting) are now the state of Georgia’s third biggest fishery by volume, behind crabs and shrimp. The first cannonball jellies were commercially harvested off the Gulf Coast of Florida in the early ’90s, and since then Darien, Georgia, has become the epicenter of the industry. ‘In 1998, the DNR issued experimental permits to allow some harvesting, and in 2013 jellyfish became a formally regulated state fishery. “It has been a really good success story,” says DNR biologist Jim Page. “We went from a critter that back in the ’60s fishermen hated because it clogged their shrimping nets to an animal these guys have been able to take advantage of, and I imagine this fishery will continue to expand.”

With one licensed jellyfish processing plant in Darien – called Golden Island International – and another purportedly opening soon, the jellyball industry (consisting of, in addition to the plant, six boats, three of which are King’s) is a job creator. During the peak season from November to about May, it employs around 150 people, a sizable number for the town of about 1,900.

We may have no choice but to eat foods that make sense ecologically – or can at least thrive in a changed environment.

At the Golden Island plant, the jellies are dried and shipped to China and Japan, where they are cut into long, thin strips and served in salads with cabbage and teriyaki sauce. If prepared right, the jellyfish are crunchy, like a carrot. Jellyfish are popular in China, along with other sea creatures like geoducks (those gigantic phallic clams from the Pacific Northwest) for similar textural reasons.

But these sorts of foods are being embraced well beyond Asia. And as climate change and the global industrial agriculture system continue on what many view as a doomed course, we may have no choice but to eat foods that make sense ecologically – or can at least thrive in a changed environment. Jellyfish, prolific breeders with low metabolic rates and the ability to eat almost anything (some breeds just ingest organic material through their epidermis), have survived in unfriendly environs for centuries. But in the end, even jellyfish are prone to humanity’s insatiable appetite; the reason why the Georgia cannonball jelly industry is booming, according to at least some involved in the industry, is because the creatures have been overharvested in parts of Asia.

Proteins are perhaps the biggest hurdle to feeding a growing planet. “I am not a doomsdayer,” says Dr. Paul Rozin, a biocultural psychologist at the University of Pennsylvania, but he does believe that our ecology is threatened. Not only are the world’s fisheries in trouble, but the meat industry has received increasing criticism for inhumane practices. 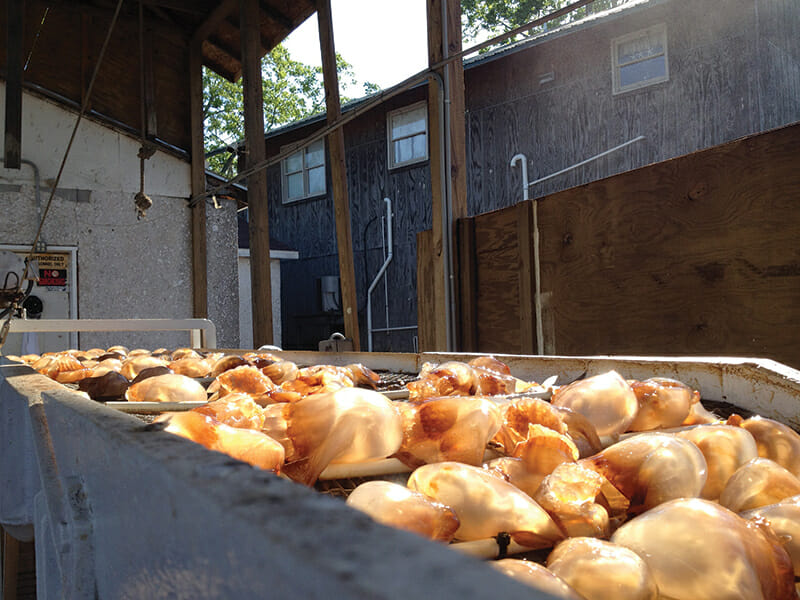 When the boat returns to shore, jellies are vacuumed onto a conveyor belt before processing; Outside Golden Island International; Partially dried jellyfish in brine, ready to be shipped to Asia.

“What we eat and how we produce it needs to be re-evaluated,” states a 2013 United Nations Food and Agriculture Organization report on edible insects. The paper points out that insects already form part of the diets of at least 2 billion people. Rearing insects uses less land than traditional livestock, and insects can be equally if not more nutritious and are more efficient at converting feed into protein. Crickets, for example, need 12 times less feed than cattle (and half as much as pigs and broiler chickens) to produce the same amount of protein. “The case needs to be made to consumers that eating insects is not only good for their health,” reads the U.N. report, “it is good for the planet.”

Still, for now, most Americans are averse to eating bugs – or jellyfish. But Rozin points to sushi as an example of how tastes can change. In the 1950s, average Americans would have politely spit into their napkins if served raw fish. Now even residents of deeply landlocked metropolises can eat fresh sushi at a Japanese restaurant. But the main lesson is one of foodonomics. Sushi is associated with worldliness and wealth, even though you can now find it at most malls; i.e., sushi was popularized from the top down.

Back on the coast of Georgia, King says he doesn’t think Southerners will ever appreciate the jellyfish. “I don’t want to disrespect,” says King, leaning against the shiprail of the Kim-Sea-King as summer thunder rumbles in the distance, “but if I take something home to my wife for dinner, it’s not going be jellyballs.”

At nearby Golden Island International, though, a Friday afternoon jellyfish taste test is underway. April Harper, Golden’s spunky manager, has chopped celery into thin slices and shredded carrots. To this she adds a teriyaki vinaigrette and slivers of jellyfish. Moments ago, the slightly diaphanous product looked like a granny’s shower cap, but cut into strips and put in the salad it resembles a tiny bowl of linguine, and Harper says it is very refreshing. The samples are for the fishermen, most of whom are unfamiliar with the product they are out there catching, but Harper plans on inviting other Darien residents soon. The company plans to push the product on the American market after completing research on its nutritional value.

“Right now, you go into a sushi restaurant and you order a squid salad,” says Harper enthusiastically. “I mean come on, I think we can beat the pants off a squid salad!”

Other photographs by Mary Wong. Shot for a Canadian Broadcasting Corporation TV documentary about jellyfish, airing in March 2015 on “The Nature of Things” with David Suzuki.