The Children and the Egg: Can a Simple Snack Change Lives in Rwanda? - Modern Farmer
Food & Drink, Lifestyle

The Children and the Egg: Can a Simple Snack Change Lives in Rwanda?

Preschoolers in Busogo receive an "egg-ucation” - three hours of lessons and a hard-boiled treat at the end. 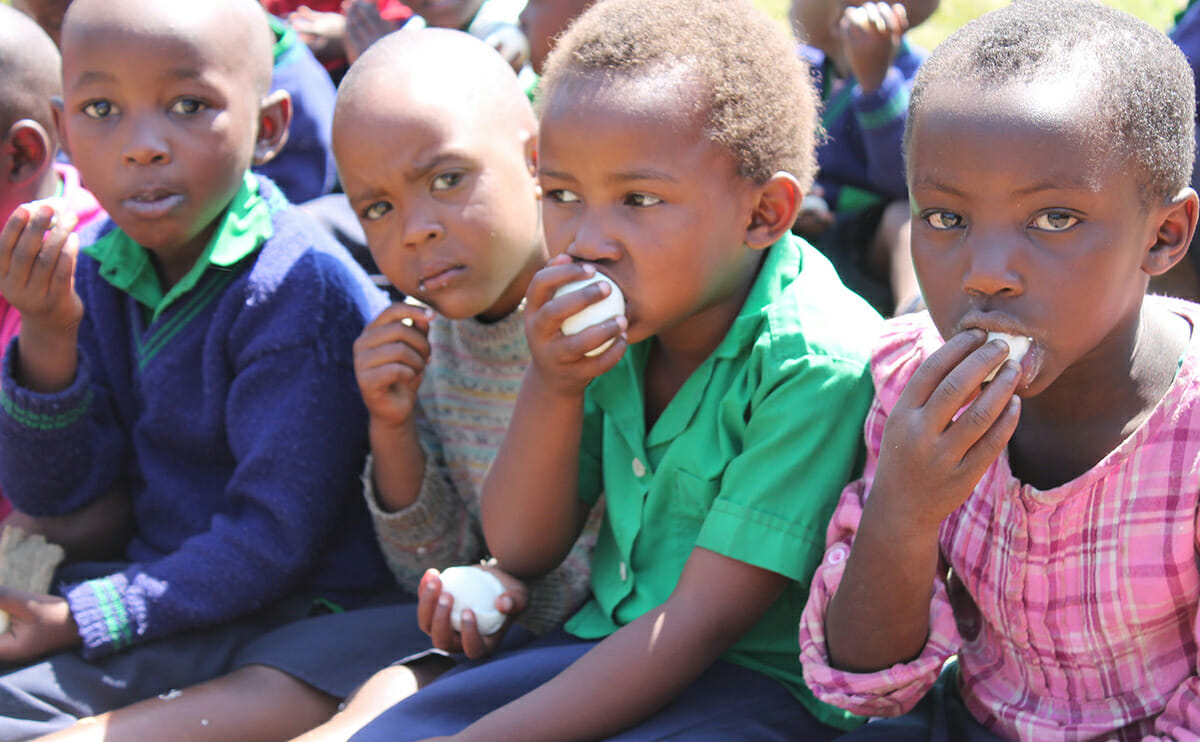 For these three- to six-years-olds, eggs represent an infusion of protein into often deficient diets. Emerging from the devastation of the genocide 20 years ago, Rwanda has made great gains socially and economically: In 2010/2011, the percentage of Rwandans living in poverty dropped to 45% from 57% five years before, as one million people gained a foothold up the socioeconomic ladder. In places like Busogo and other small Rwandan villages, however, there are reminders of persistent poverty, like the distended belly of a child who is not getting enough – or the right – nutrition. 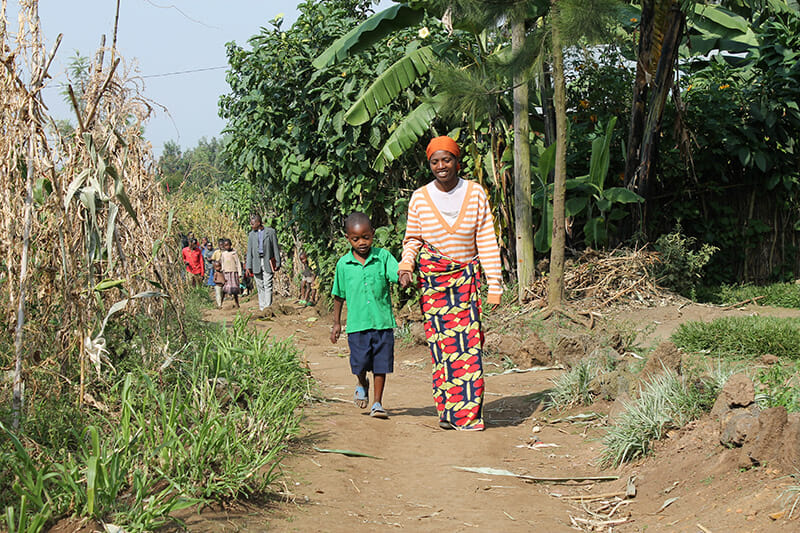 A Rwanda mother walks her children to preschool.

That’s where the egg comes in. A U.S.-based NGO called OneEgg has partnered with the Anglican Shyira Diocese, which operates about 220 preschools in the Northern Province. Any child, regardless of religious affiliation, may attend the preschools.

Thus far, thanks to OneEgg sponsors, 15 preschools receive eggs each school day to promote physical and cognitive development in the children. (Research currently underway appears to validate that children plus daily eggs equals better growth). The plan is to expand the egg distribution to as many preschools as possible. 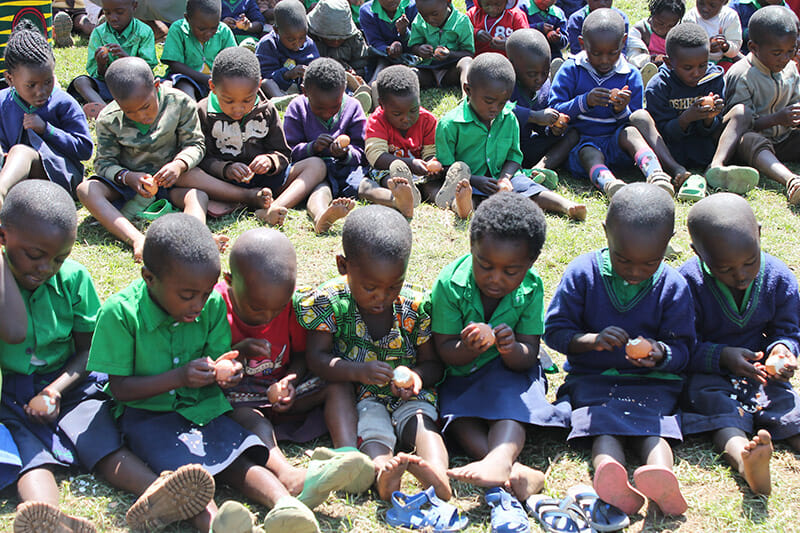 Getting a hard-boiled egg is the highlight of the day for many of the children.

The eggs are sourced from a local farm, which is supported by American agricultural specialists from Tyson Foods and its Cobb Vantress research arm, and is managed by and employs Rwandan workers. The farm teaches agricultural best practices, creates jobs, and increases the availability of eggs.

The circle from chicken-to-egg is completed in the hands of preschool children in places like Busogo, where eggs complement the compatible goals of child security, education, hygiene, and spiritual development, as well as poverty alleviation for working mothers. Because of these preschools, the women in the villages, who account for most of the farmers in Rwanda, are able to do their daily work – growing crops, gathering firewood, toting water – without worrying about leaving their young children unattended. 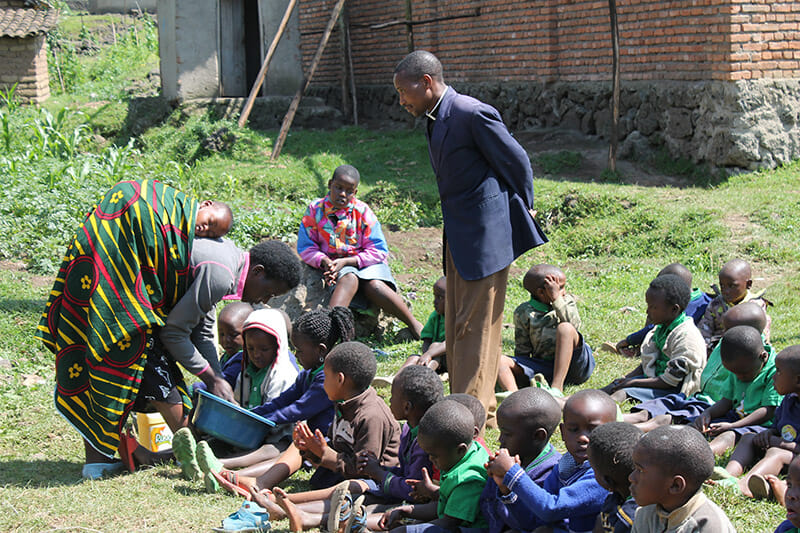 Pastor Donat Hatangimana and his wife (with the baby sleeping on her back) as the children wash their hands before eating the eggs. Hygiene is an important lesson at the preschool.

Unlike the image of the typical American preschool, the one in Busogo is neither brightly lit nor filled with educational toys in primary colors. In fact, the Busogo preschoolers are split between two mud brick classrooms with dirt floors and no glass in the windows. Wooden shutters let in the only light. Amid these rustic conditions, though, learners between the ages of three and six recite the alphabet, count, and sing in Kinyarwanda and English.

“We show the parents the benefit of early childhood education and how this can make a difference in the community,” said Rev. Dr. Laurent Mbanda, Bishop of Shyira Diocese, and a former executive with Compassion International. 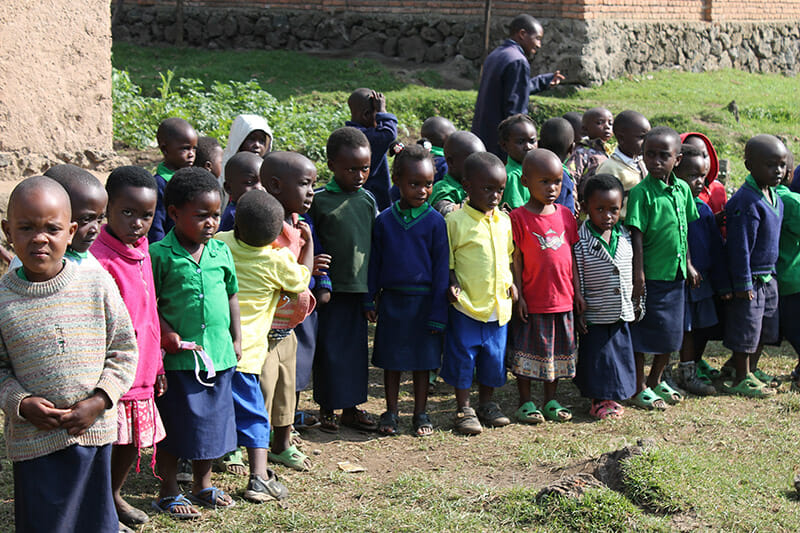 A group shot of the preschoolers at Busogo ”“ outside their “schoolhouse”

For the preschoolers at places like Busogo, the program might be thought of as “egg-ucation” – three hours of lessons and a hard-boiled treat at the end. As the eggs are distributed, little fingers that can’t quite manage the peeling are helped by teachers or volunteers parents, including the minister’s wife, who walks among the children with a baby swaddled on her back

One mother at Busogo, speaking through an interpreter, praised the preschool program where her child learns to count and speak a little English, and socializes with others. “And he gets an egg every day,” she said. “That makes him healthy.”