The rich history of the best traveled of lawn ornaments. 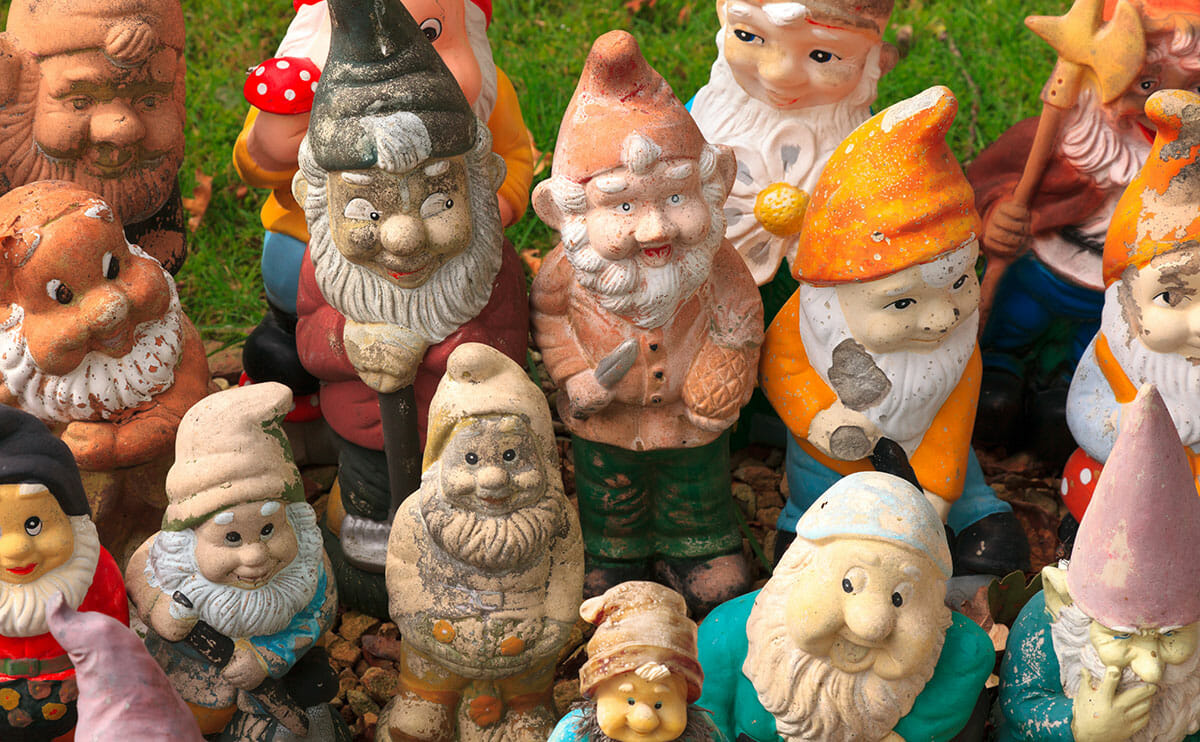 As with, say, the pioneer of the hamburger, the inventor of the garden gnome has several claimants. Philipp Griebel, a trained porcelain maker who in 1874 founded a shop in the German state of Thuringia, is one of them. Griebel is said to have lifted the likeness of his creations from nearby miners whose small stature predisposed them to their profession. The gnome’s popular red cap was a staple of miner’s clothing that made workers more visible in dark shafts. Griebel’s gnomes and others like them were regionally popular, in part because of superstition that held gnomes might garden overnight or help protect property.

Yet many sources have it that Sir Charles Isham of the estate Lamport Hall in Northamptonshire introduced the gnome to the fertile English garden in 1847 (predating Griebel’s shop). Isham was an eccentric (read: vegetarian) and much of his time was devoted to the creation of an immense rockery. No follower, Isham avoided the druid stones that were popular during the day and instead included a group of gnomes in his landscape.

High society views worked to demote gnomes to the class of kitsch.

As a folklore fanatic who collected stories of gnomes and mine fairies in Wales and Dovedale, Isham purchased a shipment of gnomes from Germany. Posed around ladders and wells, they amusingly appeared to emerge from the earth after invisible labors. Some were even provided banners of protest for better pay and a worthier employer.

After Isham’s death in 1903 his daughters removed his gnomes from the grounds. One specimen known as ‘Lampy‘ survives: Held behind secure glass in Lamport Hall, Lampy is insured for $1 million pounds.

By 1912, gnomes raised their pointy-hatted heads at the Royal International Horticultural Exhibition in Chelsea. But the creations were deemed tacky, and quickly banned along with “highly coloured figures, fairies or any similar creatures, actual or mythical, as garden ornaments.” Such high society views worked to demote gnomes to the class of kitsch. However gnomes were granted a reprieve in 2013, rematerializing at the Royal International Horticultural Exhibition.

During World War I, German craftwork grew unpopular in world markets, and gnomes didn’t start selling again until after World War II. This resurgence is attributed to Disney, whose “Snow White and the Seven Dwarfs”. The dwarfs shared a lot of similarities with garden gnomes, and helped refine their appearance. British companies, like one owned by the father of Prime Minister John Major, were quite successful in the gnome business, and soon many suburban gardens boasted a full set of the seven dwarfs.

Candace Kimmel, a contemporary gnome maker in America, fondly remembers and recreates the ubiquitous gnomes of her Welsh childhood.

“Everyone has a gnome at the bottom of the garden for good luck. It’s a tradition,” Kimmel wrote in an email, noting that, “a single gnome can be passed down for many generations.”

Today there are an estimated 15 million gnomes dotting Europe, largely in Germany and Switzerland.

Gnomes continued to make more pop culture appearances, in such films at 1997’s “The Full Monty” and the 2001 film “Amelie.” The latter featured what is known as the travelling gnome prank as a subplot: Amelie sends her father’s gnome on a world tour with an airline flight attendant, baffling him and inspiring him to travel. In 2011, the children’s film “Gnomeo & Juliet” starred garden gnome protagonists who come to life when unwatched.

The Garden Gnome Liberation Front founded in France in 1997 calls for “an end to oppressive gardening and freedom for garden gnomes worldwide.”

Gnome pranks (or “gnoming”) became fashionable at the turn of the 21st century. The Garden Gnome Liberation Front founded in France in 1997 calls for “an end to oppressive gardening and freedom for garden gnomes worldwide.” Gnoming practice includes the theft of garden gnomes (“gnome hunting,”) and, like in Amelie, the traveling gnome prank. Some kidnapped garden gnomes have been dispatched around the world with pranksters sending photos of the traveling gnome or even ransom notes to their owners. This stunt was the inspiration for Travelocity’s “Roaming Gnome” advertisement campaign, which launched in 2003.

Dr. Twigs Way, author of the book Garden Gnomes: A History, posits that Gnome pranks are “the result of intergenerational clashes of culture – for the under 40s, a gnome represents the awful static naffness of grindingly boring suburbia (at least in England).” Here her email message assures us that her comments are tongue in cheek. “To send them traveling the world is to highlight the differences between the post-war austerity stay at home generation and the wealthy adventurous travel the world generation. The gnome has become an artifact of that generational conflict.”

Today, several museums and sanctuaries celebrate the garden gnome. Advertised as a place where gnomes can “live, work and play,” Auburn California’s Gnome Habitat hosts 2,000 gnomes on five acres. It’s inspired by England’s Gnome Reserve & Wildflower Garden, which attracts around 25,000 red gnome hat-wearing (human) visitors annually. Liz Spera, the Gnome Habitat’s founder, lives on the property with her family and chickens. She has served as president of the International Gnome Club, which publishes three email newsletters a year.

Contemporary inhabitants of Thuringia celebrate their contribution to garden statuary and culture with an annual fair and gnome party. Today the fourth generation of Griebels still produce garden gnomes, having weathered the fallow war years. Griebel’s gnomes can be purchased for around 40 dollars for a small specimen to 120 dollars for a large one.

“These aren’t the kind of gnomes you find at Wal-Mart,” says American importer Don Lawrence on behalf of the Griebels, who speak no English.