A Dog’s Life: A Brief History of the Turnspit Dog

A history lesson about the not-very-fun life of the turnspit dog, charged with trotting in circles to keep kitchens running. 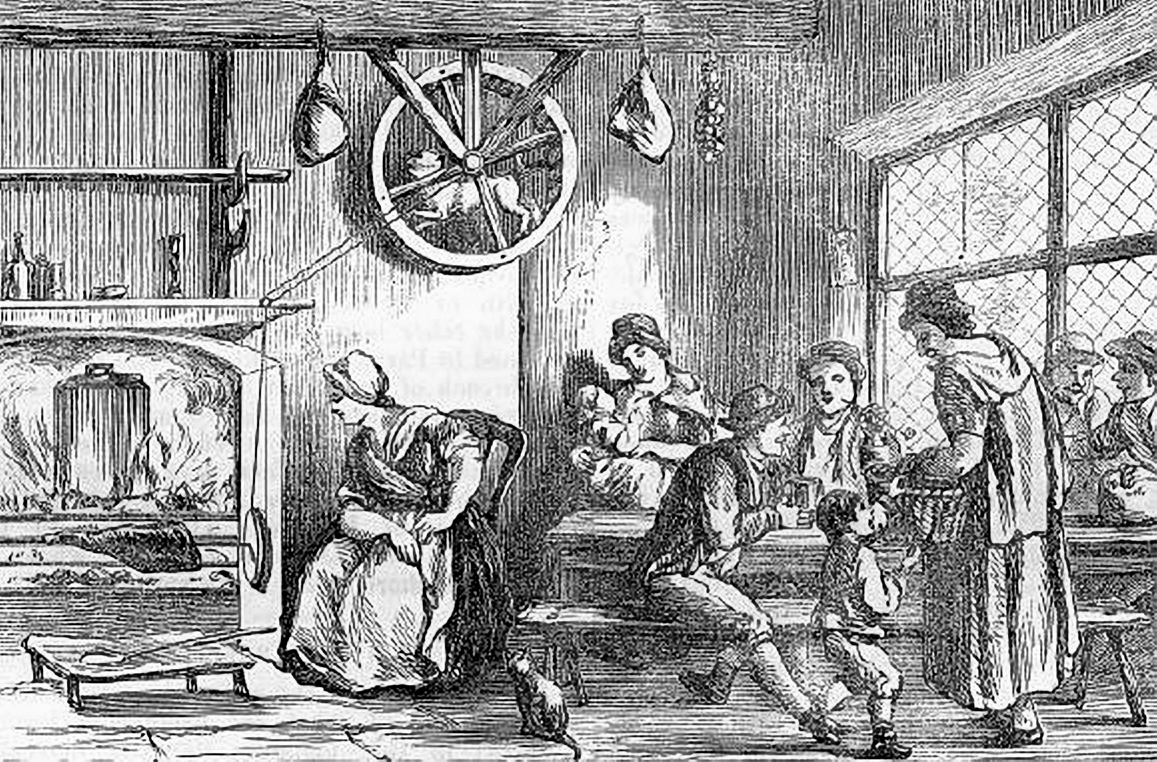 At the center of this was the turnspit dog.

Turnspit dogs were bred to be the work horse of the kitchen. The breed was popular in England and, to a lesser extent, America, from 16th century to the end of the 19th.

Though there may be some ambiguity of when the first turnspit dog appeared, the first mention came in a 1576 book “Of Englishe Dogs,” by John Caius. In his short explanation, he offers one of the only glimpses of the turnspit dog. The turnspit was “so low on the social order,” says Stephen L. Zawistowski of the American Society for the Prevention of Cruelty to Animals (ASPCA), that “nobody took account of them,” leaving their history spotty.

What we do know about turnspit dogs comes from drawings and a taxidermy turnspit named Whiskey at the Abergavenny museum in Wales. Stanley Coren, author of “Paw Prints on History,” describes them as having a “very similar body shape to a basset hound with the head of a pit bull.”

The dogs were forced to walk for hours in specifically designed wheels.

Turnspit dogs were specially bred to have long bodies and powerful short legs, to provide a source of power, usually for a kitchen’s rotisserie. “It seems that many households used them,” says Laura Hobgood-Oster, author of “A Dog’s History of the World.” “They certainly were very important in British culture for several hundred years.”

The job of the turnspit dog was as simple as it was painful. Used mostly in bars and large kitchens, the dogs were forced to walk for hours in specifically designed wheels which powered a variety of kitchen appliances from fruit presses to butter churns.

It was their most grueling task that gave them their name: turning meat on a spit, over an open fire. These wheels would usually be mounted high off the floor, with closed sides to prevent the dog from escaping. In the wheel, the dogs would have to walk for hours on end. It is hard to imagine dogs in these environments, but as Coren says, “you just have to think of them as a power source.” That is what they were, and that is how they were treated.

To prepare a cut of meat could take hours. Chefs and inn owners used a variety of wicked methods to make sure the dog never stopped.

“Sometimes a cook would throw in a hot coal,” to keep the dog moving fast enough, says Coren, along with “collars that would choke the dog unless they moved.” The wheels were close enough to the fire to fill the dogs lungs with smoke and make them unbearably hot. The repetitive movement put strain on their long backs and could create chronic pain similar to Carpal Tunnel syndrome.

They were a bred to be abused in a wheel, living short and painful lives.

There is one story told in “The Annals of Bath, that shows the level of abuse. The dogs were often brought to church to be used as foot warmers. During one Sunday service, the preacher told the story of Ezekiel and the wheel in the sky. At the third mention of the word wheel, all the dogs bolted for the door.

The 20th century marked the rise of accessible electricity and of the middle class in America and Britain. Once the luxury of the rich, keeping animals as pets became more popular. “Every time we see a rise in the middle class we see dogs go from food or workers to pets,” says Hobgood-Oster.

With electricity in the kitchen, turnspits were out of a job. “We just stopped breeding them,” says Hobgood-Oster, so they disappeared. You could easily say good riddance. They were a bred to be abused in a wheel, living short and painful lives. But as Zawistowski points out, what the turnspit shows is “how much we have seen the roles of dogs change in our society and how they work with us.” We no longer view them as power sources, but as intelligent partners helping us with anything from companionship to bomb detection.