Hold onto your eggs, chickens might be the newest trend in therapy animals. 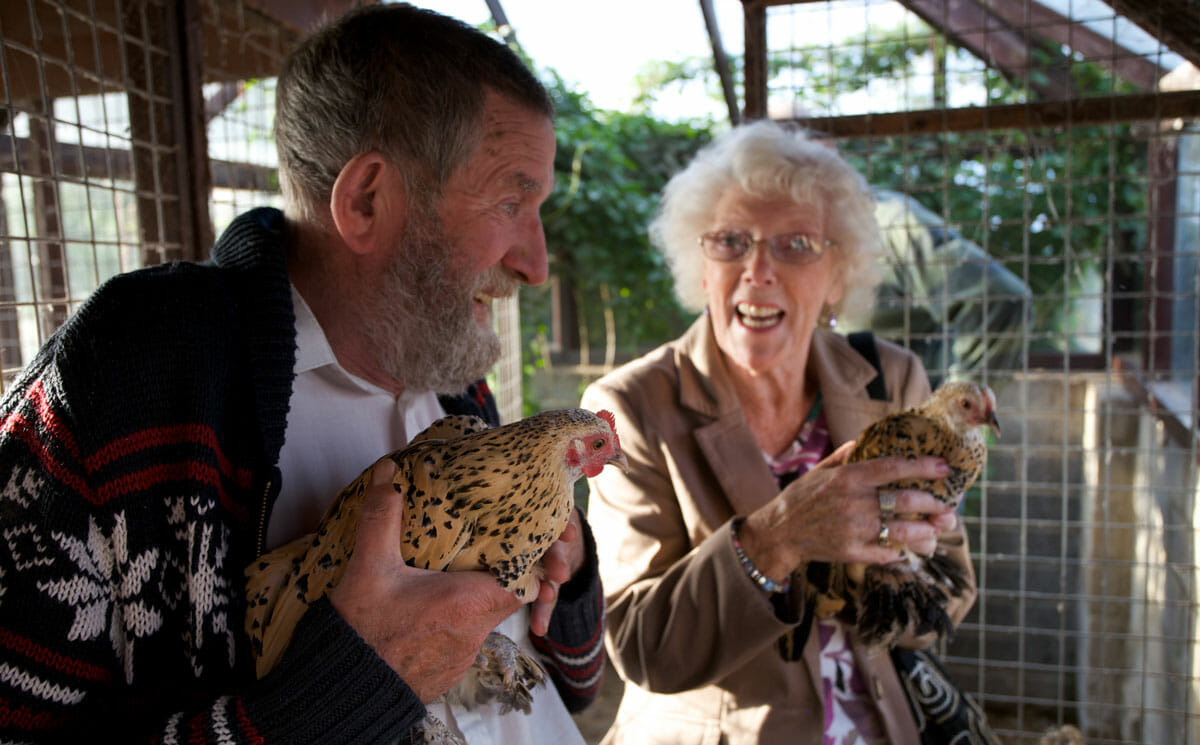 Though some nursing homes allow outside volunteers to bring in chickens for brief visits, a few have started keeping hens full-time. Many nursing homes allow visits by therapy animals – often cats or specially trained dogs – but in extra-care settings, live-in companions are rare. In Massachusetts, the Life Care Center of Nashoba Valley first introduced chickens as a calming aid for patients with dementia in 2013. And in England, an organization called HenPower has been facilitating the rise of chicken coops in nursing homes throughout the country, even coining their own phrase for chicken-lovers, riffing on a Britishism for elderly person – meet the “hensioners.”

Nashoba Valley was already housing llamas, goats, an alpaca, and indoor cat. Once Director Ellen Levinson got the idea, adding chickens to their 40-acre property wasn’t a stretch. She worked with Terry Golson, a poultry expert who’d been featured on Martha Stewart’s television show and in the New Yorker, to pick birds that had the right temperament and look. From a starting flock of 25, Golson only brought the friendliest five to Nashoba Valley.

They installed the coop directly outside a window where the memory loss patients spent most of their time. Though there were already other animals, patients had to walk down a long path to a field in order to visit them – an impossibility for most on a regular basis. Now residents and hens were separated by just a pane of glass. “The wonderful thing about chickens is there’s always something going on, there’s always constant movement,” Golson said. “It’s calming. It’s like having the ocean in your backyard.”

For the Nashoba Valley residents – mostly in their 80s or 90s – chickens are a source of nostalgia. Most people with rural and even suburban backgrounds had a hen in the backyard. “People who can’t remember what they ate last night can remember a breed of chicken they had growing up,” Golson said. When she does nursing home visits, she packs some eggs from her own hens to tap into people’s memories of cooking.

A number of recent peer-reviewed studies have found that animal-assisted therapy provides marked benefits to elderly patients with dementia or other psychiatric illnesses. Most of these reports have concentrated on brief interaction with animals rather than the benefit of an animal-based responsibility. Yet the success of these full-time programs is starting to speak for itself.

A number of recent peer-reviewed studies have found that animal-assisted therapy provides marked benefits to elderly patients with dementia or other psychiatric illnesses.

For HenPower, many of their greatest successes have been with able-bodied residents of nursing homes in their network. Eight homes had put themselves under HenPower’s wing by the end of the first year. It all started because of a patient who’d once kept hens of his own.

Upon his arrival at Shadon House, a nursing home in Gateshead, England, Billy was distressed. When his case manager, Joanne Matthewson, learned that it was because he missed his flock of chickens, she wondered if there wasn’t something she could do. She contacted an organization called Equal Arts that provided enrichment opportunities to the elderly and together they found a way to get Billy a new flock. The six hens delivered in 2012 prompted a fast change in his demeanor. Billy had been confused and unsettled upon his arrival but now he was calm and finally at home.

Other homes throughout England began contacting EqualArts. If chickens had inspired such a change at Shadon House, surely others could benefit from a flock too. “Most of these people were slowing down, not stepping into wellies,” project jead Jos Forester-Melville said, “Henkeeping is such a basic thing but for them it’s an entirely new focus and interest.”

In the first year, HenPower brought chickens to a new nursing home every month on average. The hensioners (a play on the English term “pensioner”) were more active both physically and within their communities. Some designed elaborate hen houses based off of old railcars and cinemas from their youth, others took to business by selling eggs, chicks, and handmade merchandise. Hensioners were approached by schools and conferences who wanted them to teach others how to have hens of their own.

Though HenPower recently received a £1 million grant from the UK’s Big Lottery Fund to roll the project out to more homes throughout England, it’s still a fairly small program. They’re hoping to develop online materials to help other nursing homes turn their residents into Hensioners. Until then, hopefully others will stumble upon the secret of “chicken therapy” soon. Right now, HenPower and Nashoba Valley appear to be the only elder care centers to keep chickens. But with so many benefits in this interaction of man and beast, expect more visits with your grandparents to include an egg or two.

love this. it is really helping me out with my FFA speech.