Thinking about buying a teacup pig? Just know that it won't fit in a teacup (or your house) for very long. 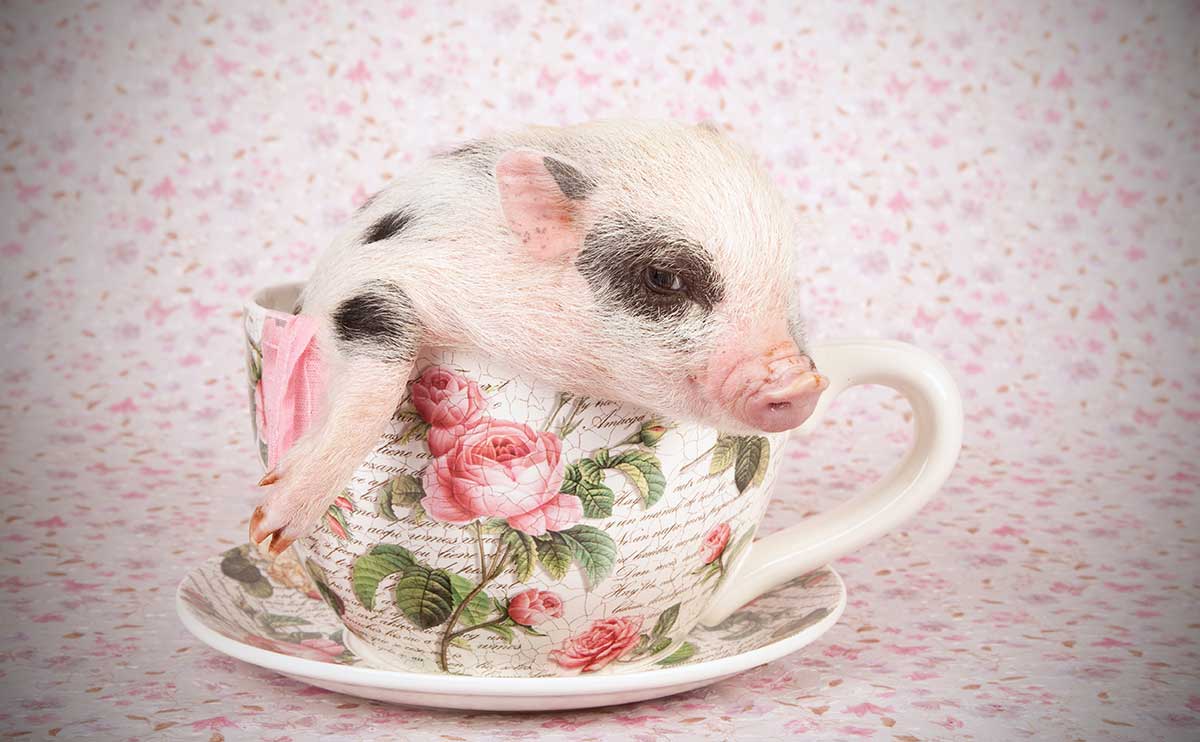 “Teacup pigs” (also sometimes sold as “micro pigs,” “pocket pigs” and “Juliana pigs”) are a marketing scam reaching back at least two decades, if not more. It works like this: Breeders put up listings for “teacup pigs,” promising to sell petite porkers a pig that’ll stay permanently tiny. Buyers then pay anywhere from $750 to over $3,500 for their teacup pig. The buyer then watches as that tiny pig becomes a larger adolescent pig, then a very large, very non-teacup-sized hog. (Check out the Southern California Association for Miniature Potbellied Pigs for some eye-opening before-and-after shots of how gigantic a teacup pig can get.)

“The word ‘teacup’ describes what the pig looks like at the exact moment in time. It has no bearing on what that animal will look like three months or 36 months down the line,” says veterinarian Dr. Patty Khuly of Miami’s Sunset Animal Clinic. “They grow well beyond their undeniably adorable small appearance, right at the outset. They get very, very large.”

‘There are instructions that you feed them a quarter cup of food a day. If people fed them that little, they could keep the pigs small. What they were essentially doing was starving the pig.’

As owners realize that they now have a hulking pig in their home (which, despite promises from breeders, are incredibly hard to housetrain), they are forced to give the pigs up. Which is where rescue operations like Crystal Kim-Han and her organization Vegas Pig Pets step in. Kim-Han takes in pigs that owners can inevitably no longer keep, and tries to find new homes for them.

Both Khuly and Kim-Han say teacup pigs are a trend that seems to peak and wane. It spiked in 2009 when Paris Hilton was snapped by paparazzi with her new pet pig, Princess Pigelette. “I went online and found these tiny teacup pigs that stay under 12 pounds when they’re fully grown,” said Hilton to Hello magazine at the time. “They’re incredibly smart, lovable, really clean and litter trained.” (Nowadays, Princess Pigelette is much, much larger, though, to Hilton’s credit, she did not give her pig up.)

More recently, deep-fried reality show “Here Comes Honey Boo-Boo” showcased a teacup pig, Glitzy, leading to a new round of people buying ostensibly tiny pigs. (That Glitzy the pig was eventually given back to the breeder on “Honey Boo-Boo” apparently did not deter buyers.)

According to Kim-Han, many unscrupulous breeders actively tell new owners to drastically underfeed their new pigs in order to keep them pint-sized. “There are instructions that you feed them a quarter cup of food a day,” says Kim-Han. “If people fed them that little, they could keep the pigs small. What they were essentially doing was starving the pig.” While malnutrition can keep their skeletal structure somewhat small, their internal organs will continue to grow apace. “They can’t function properly because they don’t have the skeletal structure to support that size,” says Kim-Han. “You start getting bone deformities because they weren’t being fed properly.”

On the opposite end, some owners find themselves unable to stop feeding their pigs. “They will eat as much as you feed them,” says Kim-Han. “For these teacups pigs that weren’t being starved, they were growing and growing, outgrowing their houses, and then being given to rescues and sanctuaries.” Whether from over or underfeeding, Kim-Han says she regularly sees pigs suffering from owners who don’t know enough and breeders who don’t bother to educate.

Like Hilton, some teacup pig buyers are taken in by websites that claim teacup pigs will be as small as 12 pounds. One site promises to sell potential buyers “Super Micro Nano Teacup Pig~ 12 LBS and up (very rare).” The problem, says Kim-Han, is that that’s impossible to guarantee a pig that small. “Yes, there are a few pigs that are in the fifty to seventy pound range that aren’t starved,” she says, “but they’re far and few between. We almost never see them.” More typical is a pig that grows to around 100 pounds. “A really big dog, that’s about as small as you can hope for,” say Dr. Khuly.

It leaves owners in a bind. “If you thought you were buying a purse-sized Chihuahua and it turned out you had a German Shepherd and you live in an apartment, I don’t blame you [for wanting to give up your pig],” says Kim-Han. “I had one today. Someone paid a thousand dollars for a pig because he has a white body and a black head, guaranteed to not grow to more than 40 pounds. Why did they give him up? The pig was screaming at the top of his lungs because they were feeding him a quarter cup of food a day, and he was starving.”

‘You thought you were buying a purse-sized Chihuahua and it turned out you had a German Shepherd.’

There’s also the larger issue of whether pigs should be kept as pets — at least as most people think of pets. First of all, there’s the difference in temperament. The two most popular domesticated pets — cats and dogs — are both traditionally predator animals. Pigs are traditionally prey, which leads to wildly different behaviors. “If you raise a happy, healthy dog, that dog is happy to see people,” says Kim-Han. “If you raise a happy, healthy pig, your pig is not happy to see people they don’t know. Their instinct says they don’t trust this strange person.”

“It speaks to the issue of domestication,” says Dr. Khuly. “We domesticated dogs and cats primarily for companionship.” It’s an ancient relationship — domesticated dogs stretch back 15,000 years and cats for at least 9,500 years. Pigs, meanwhile, are different. “At no point in the history of pig domestication was the pig ever considered a pet. There’s a lot to be said for how humans have historically interacted with these animals.” In other words, it’s hard to suddenly change the behavior of something we’ve bred for dinner for thousands of years into something we can pal around with.

While both Kim-Han and Dr. Khuly emphasize that pigs can make great companions, they’ll have special needs. They’ll grow larger than most family pets — even a miniature potbellied pig will likely outweigh an average person by the time it’s done growing. Outdoor space is a must, and Kim-Han recommends that potential pet pig owners adopt at least two pigs, as they’re herd animals. Pigs (especially males) should be fixed, and you’ll likely need to find a speciality vet to do so.

If, at the end of this, you still feel like you’ve got a penchant for a pet pig, there’s one final bit of advice: adopt. Groups like Kim-Han’s Vegas Pet Pigs exist across the country. Pigs are incredibly prodigious breeders, and rescue shelters and sanctuaries are often overwhelmed. Just be aware that whatever you adopt, it’ll never fit inside a teacup.

I recently purchased a miniature pot bellied pig. My expectations were low as I have had no experience raising pigs as a pet.
Unfortunately you lost my trust and credibility as an educational resource with your remark that pigs are,’incredibly hard to house train.’ Our pig is 2 months old and goes to the bathroom in a litter box filled with pine shavings. It was surprisingly easy-much easier than a puppy.

Mini pigs are incredibly easy to housebreak. Mine pretty much potty trained herself. The quarter cup feeding is twice a day along with a lot of fresh vegetables. The food intake increases at 6 months. At a year it is two cups a day. There are several inaccuracies in this article. With that said every adult pig will be 50 pounds and up. Signed a mini pig owner.

My mini micro piggy is the best pet you could ask for. Pigs are very simple to train. First thing you teach the pig, is what No means. I live a hundred mile north of Toronto Ontario Canada. She lives in the house. Does all her bathroom business outside, even when it get 20 or 30 below c. Even though she weighs 150 to 175 lbs. they like to cuddle.They are like humans, if you feed them salt or sugar. They gain weight. Very simple.
This is a special pig. She doesn’t root the back yard.

Another common reason pet pigs are surrendered for adoption is because they grew larger than expected. Cant takes issue with the terms used to describe pet pigs. “Words like ‘micro’ and ‘teacup’ are misleading,” she says. Many pigs sold as pets are young, even newborn, and have yet to reach their full size and weight, which can be substan

My daughter wants a pig… I’m glad I read this blog before we ran out to get one. Her pig desire will have to wait until we move on to a larger property where we can keep the pig once it gets larger. Thank you for providing the information about future care. I totally didn’t think about that and now need to know how long a domesticated pigs lives. Kind of like when my children wanted a tortoise.

Beware of unscrupulous ( and downright lying) so-called Miniature Pig breeders ! My friend bought one, after having been shown “the piglet’s mother,” which was 25 pounds. The breeder then told my friend the piglet would grow to a maximum weight of around 25 pounds. Liar, liar, pants on fire ! When my friend told me that her pig will stay in the 25 pound range, I told her, “try multiplying that weight by about 10 !” Today, the pig is 5 years old and weighs around 225 pounds. P.T. Barnum said it best: “There’s a sucker born every minute.”… Read more »

Your style is really unique in comparison to other folks I
have read stuff from. Thanks for posting when you’ve got the opportunity, Guess I will
just bookmark this blog.

Do you ship across country??

do you know where I can adopt a young tea cup pig? donna

Popular
Yes, the Government Really Does Stash Billions of Pounds of Cheese in...Emily Baron Cadloff
7 Smokable Plants You Can Grow That Aren’t MarijuanaBrian Barth
How to (Actually) Get Rid of Fruit FliesEmily Baron Cadloff
6 Differences Between Llamas and AlpacasAndrew Amelinckx
What to Do With an Abundance of PeppersShelby Vittek
Explore Modern Farmer
Related
Animals
Cattle Ranchers On High Alert After Longhorned Tick Found in MissouriShea Swenson
Plants
Why You Should Grow Almonds and Thyme TogetherShea Swenson
Environment, Plants
Making the Case for IntercroppingShea Swenson
MTMF
Meet the Modern Farmer Helping Immigrant Farmers Sell Their ProduceBridget Shirvell
wpDiscuz
We use cookies on our website to give you the most relevant experience by remembering your preferences and repeat visits. By clicking “Accept”, you consent to the use of ALL the cookies.
Cookie settings ACCEPT
Privacy & Cookies Policy