Queen Turner, a Humphrey Fellow who visited UC Davis as part of her fellowship, inspected the beekeeping operation on the rooftop of the San Francisco Chronicle. Here a bee flies at the camera. Queen completed a 10-month stay and returned to Botswana where she is head of the beekeeping section for Ministry of Agriculture for […] 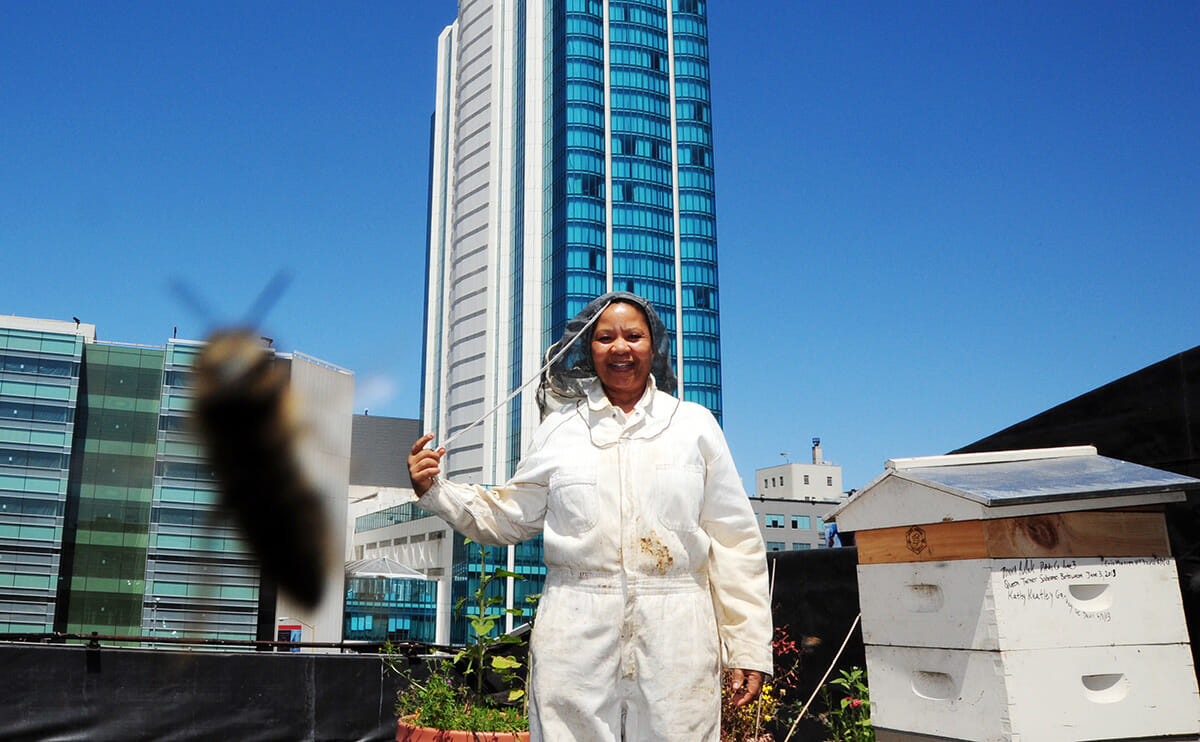 Queen Turner, a Humphrey Fellow who visited UC Davis as part of her fellowship, inspected the beekeeping operation on the rooftop of the San Francisco Chronicle. Here a bee flies at the camera. Queen completed a 10-month stay and returned to Botswana where she is head of the beekeeping section for Ministry of Agriculture for government of Botswana. During her stay, she attended many seminars and presented a lecture on Beekeeping in Botswana. One of her favorite places was the Harry H. Laidlaw Jr. Honey Bee Research Facility and the Honey Bee Haven. The word for bee in her native language, Setswana, is notshi. – Kathy Keatley Garvey, staff member, UC Davis Department of Entomology and Nematology

The “seaweed mamas” live and work on the island of Zanzibar off the coast of Tanzania in East Africa. With such a high demand for seaweed for use in food and cosmetic products around the world, these women work up to 14 hours a day planting, harvesting and drying seaweed for export. Yet the life is not so easy – even with a high demand for their product, the mamas are paid low wages and cannot demand higher payment because buyers could easily move to another location. On my study abroad journey in Tanzania in 2012, I lived with Fatima (pictured) who allowed me to work alongside her in the seaweed beds next to her home in the village of Jambiani. Fatima plays a role in international food production by providing a valuable resource to millions of people. – Margery Magill, UC Davis student majoring in International Agricultural Development

These women are transplanting rice seedlings in Chiang Mai province, northern Thailand. Rice is a major crop in Thailand, using half the farmable area. Rice is very important culturally and consumed locally and daily for each meal. Despite growth in mechanization, rice is still largely hand-transplanted across Thailand. Although known as the Land of Smiles, Thailand is not all smiles for everyone. Rice transplanting is hard labor, despite the smiling faces for the camera. Agricultural labor can be scarce and workers face low-paying wages. – Tom Stein, UC Davis graduate student, International Agricultural Development and Soils and Biogeochemistry. (Photos taken during field visit with the UC Davis D-Lab and Education Concerns for Hunger Organization (ECHO), with funding from the Horticulture Collaborative Research Support Program at UC Davis.)

A farmer leads her herd for a drink among ruins near Patara, Turkey. Life near the ancient Lycian tombs has brought roads, archaeologists and tourists near her home and farm. – Courtney Jallo, UC Davis graduate student, International Agricultural Development.

This woman and her grandson live in eastern Nepal, north of Khandbari. Surrounding her house are scattered garden plots full of “saag” (leafy greens, such as the mustard pictured above), cauliflower, garlic, millet, bananas, papayas and fodder for her cow and medicinal plants. In much of rural Nepal, women are the sole land-workers, as many Nepali men leave their farms and families to emigrate for work in the United Arab Emirates. This has caused major labor shortages and a dependence on rice imports from India. – Courtney Jallo, UC Davis graduate student, International Agricultural Development. (Photo taken during a trip to work with Kathmandu International Study Centre, with Horticulture CRSP Trellis funding.)

Amanda, Laura and Manisha harvest lima beans in Westley, California in October of 2013 by loading the cut dry plants into the thresher which will separate the seeds from the pods. These three women are part of the University of California Dry Bean Breeding program. Researchers work with growers to develop improved bean varieties with higher yield and seed quality. Because of the good agriculture land and long growing season, California produces 99 percent of the dry lima beans grown in the United States. Amanda Luna Mera (left) is a Mexican graduate student focused on conservation and sustainable use of genetic resources for food and agriculture. She plans to research conservation of agro-biodiversity, and to promote local development of farmers. She developed her interest in agriculture through experiences in rural Mexico. She has participated in several international and interdisciplinary projects regarding different edible species such as maize, squash and melon, in Mexico and the Netherlands. Laura Gamino (middle) assists in all aspects of the bean field management. Working at Pioneer in Woodland, California, was her first job. Though her father has land outside of Guanjato, Mexico, where she grew up, Laura only began working in agriculture after moving to the United States in 2004. She really enjoys working in agriculture especially when the weather is good and the field crew is good. Manisha Thapa (right) is a graduate student from Nepal studying horticulture and agronomy, with a focus on garbanzo beans. – Sarah Dohle, UC Davis graduate student in Plant Sciences

4-H is a great youth development program where youths learn by doing and to make the best better. It offers scores of traditional and modern-day projects, including agricultural. Here Sam Dietz (center) of the Dixon FFA holds her goat for tagging at a recent Dixon May Fair ear-tagging day. With her are Dixon residents Lloyd McCabe (left) and Mike Reis, livestock superintendent. – Kathy Keatley Garvey, UC Davis Department of Entomology and Nematology

One way to extend the harvest is to preserve food by drying it. In the United States, food companies have large driers that require electricity. But solar drying is a method that can be used anywhere that there is sunshine. The group that I work for, Horticulture CRSP, has been testing different kinds of solar dryers to see if some will work where skies are overcast. This photo is of our collaborator, Noel Makete. Noel is a scientist at the Kenya Agricultural Research Institute. Her expertise is in vegetable postharvest. She feeds the world by developing new ways for farmers in developing countries to produce, store and sell vegetables. In this photo, she is demonstrating the use of the solar dryer. In the dryer are onions and tomatoes. Noel had just completed a year-long course from Horticulture CRSP where she studied postharvest. I met her at the completion of that course. – Amanda Crump, staff member, Horticulture Collaborative Research Support Program, UC Davis

In northwest Burkina Faso, the linear transfer of knowledge from elder women to younger generations is at once a formal and informal endeavor. Often at the height of the day, when the sun is too oppressive to continue working, the women and girls will retreat under woven thatched overhangs and converse. It is a time when the boundaries of decorum are crossed, stories are shared and little by little, knowledge is passed. In the rural village of Koumbara, 30 kilometers from the Mali border, every woman is a farmer, and every girl is her apprentice. These midday pauses are crucial, as they help to define the younger generations not just as stewards of the land, but as individuals discovering their voices within the community. As a result, the photograph is effectively a family portrait, with the women and girls fixed in this intimate moment of exchange and reflection. During my Peace Corps service in Koumbara, I grew to know these women and girls well. They dutifully served as my adoptive family, and I was fortunate enough to share most of my meals with them. To me this photograph faithfully illustrates how I most remember them, portraying their unending openness, compassion, humor and empathy. – Jason T. Tsichlis, UC Davis graduate student in International Agricultural Development

Nasima was selected from among the Afghan District Extension offices staff to participate in the Cochran Fellowship Program hosted by the UC Davis CA&ES International Programs Office. She traveled throughout the United States, learning about the American approach to agricultural production and processing along with instructor/coordinator Corky Lovin, translator Hussain Sharifi, and a dozen other Afghans in May 2013. This photo was taken at the national Ag Fair in Kabul, Afghanistan in November 2013, attended by Hussain and other members of the e-Afghan Ag team (based in the same office at UC Davis). Nasima picked Hussain out of the crowd and came rushing over to us. She was absolutely thrilled to see him again, and couldn’t wait to show us the booth she was hosting. At the booth, she proudly displayed the neatly arranged fruits and vegetables, and explained that she had been applying the grading and packing methods Corky had taught her at the Los Angeles market. It was a particularly special opportunity to see the positive impacts of our office’s work. – Megan M. Mayzelle, staff member at the International Programs Office, UC Davis College of Agricultural and Environmental Sciences