It was a major drug bust. 1,600 arrests and over 11,000 pounds of a highly addictive substance confiscated. But it wasn't the DEA breaking up a meth ring. It was the Chinese, stopping the British from importing opium. 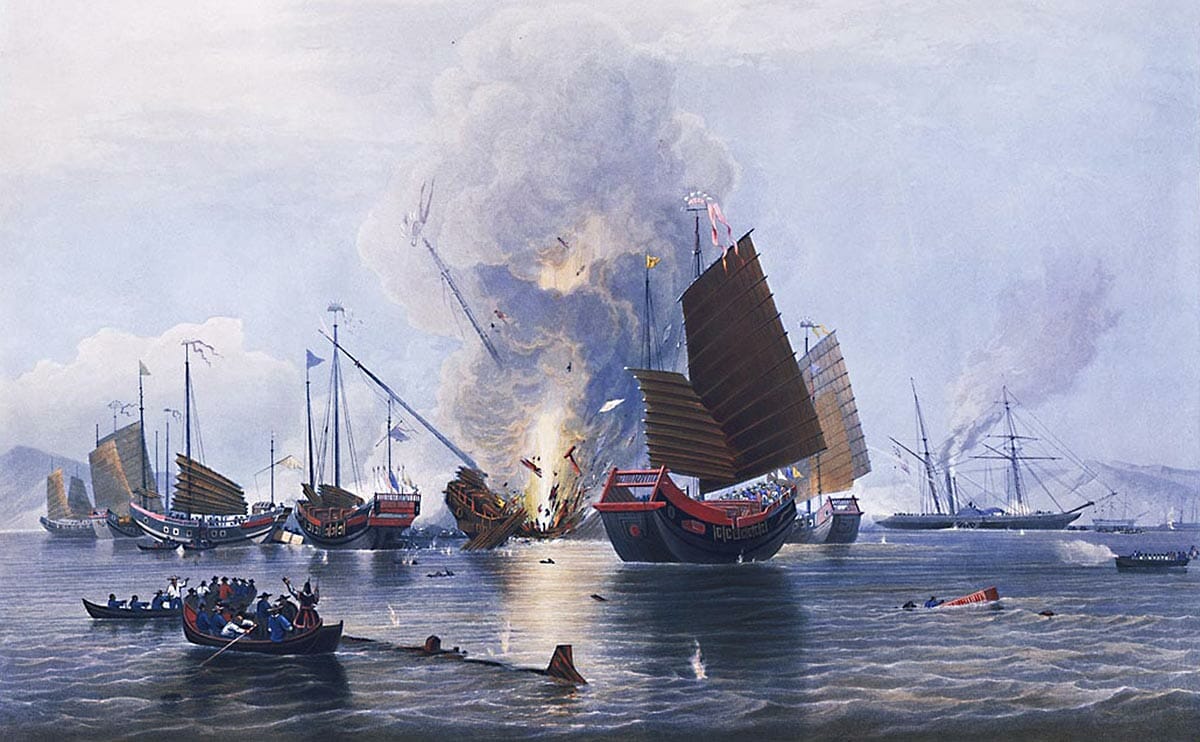 To the British, the Chinese crackdown was a matter of business. It was a perceived trade imbalance on the British end due to Chinese officials requiring silver in trade for their goods, most notably tea, that led the British to realize that opium could tip the scales in their favor.

The British government, initially through its East India Company, had tried trading everything from woolens to scientific instruments to pottery, but the Chinese only cared about precious metals.

But when they realized opium was becoming more and more in demand in China the British knew it was their ticket in. Opium was not widely produced in China, but was grown extensively in India, where the British had taken control of production. By the 19th century, poppy cultivation and opium production had been firmly established in India, mainly in Bengal and Bihar. It was a major part of India’s agricultural market with tens of thousands employed in the far reaching, and lucrative, business.

The opium poppy, Papaver somniferum, the cousin of cabbage, was first known to be cultivated in lower Mesopotamia, what is now Southwest Asia, more than 5,000 years ago.

The knowledge of how to cultivate the flower and the power of its narcotic properties began spreading from culture to culture.

The opium poppy, Papaver somniferum, the cousin of cabbage, was first known to be cultivated in lower Mesopotamia, what is now Southwest Asia, more than 5,000 years ago.

The flower is relatively fast to produce, somewhere along the line of three to 4 ½ months from seed to harvest. When the plants were ready for harvest the farmers used multi-bladed tools to make shallow incisions in the plant’s unripe pod. The thick sap, known as latex, that oozed out was later collected, dried, rolled into spheres the size of small cannon balls, covered in poppy petals and packed into chests for export.

The balls of raw opium were then brought by ship to just outside Canton (Guangzhou), the only port the Chinese allowed the British traders to use. Chinese smuggling boats would bring the opium the rest of the way, while Chinese government officials looked the other way after receiving healthy bribes.

To the Chinese, stopping the opium trade was about trying to save the lives of its estimated 12 million citizens addicted to the drug. It’s believed that 90 percent of the males under 40 living in the coastal regions of China were opium addicts. One possible reason for the rise, besides a flooded market, was the introduction of smoking the drug, unheard of before the 1700s, which hooked users more quickly than those who ingested opium the traditional way: by eating it.

Opium was first outlawed there in 1729, a more forceful ban came 70 years later. The edict proclaimed it was “odious and deplorable” that “foreigners” were deriving profits while the Chinese pursued a “destructive and ensnaring vice.”

According to the British commander John Elliot Bingham, who fought in the first Opium War with the Royal Navy, the 1799 ban of opium almost convinced the East India Company to discontinue importation of the drug, “but it was becoming to our Indian possessions too lucrative an export to be lightly given up, and each year saw the demand for opium increased and increasing.”

And damn it, the Brits needed their tea. Ever since the 1660s when King Charles II wed the Portuguese Princess Catherine of Braganza (a purported tea addict who made the drink fashionable) the British couldn’t get enough of it. The Crown was burning through its silver reserves to buy the stuff, which until they began cultivating it in India, was really only available from China with its standoffish rules and regulations and demand for silver. In a 50 year period prior to 1828, Britain paid out £27m in silver to the Chinese. During the same period they only sold about £9m of British goods to them. That balance shifted dramatically when the British went full bore into opium smuggling.

In the decade of the 1830s, despite an imperial decree outlawing the export of silver, China exported more than seven times more silver than it took in (an estimated $7 million in and $52 million out) a lot of that used to buy opium. And that doesn’t include the gold that was exported in the same decade.

By the eve of war British merchants were exporting about $25 million (about $245 million today) worth of opium to China from their Indian possessions.

In March 1839, Lin Ze-xu, Emperor Daoguang’s special emissary and the governor of a Central Chinese province, was sent to Canton to crack down on the smuggling, and made the aforementioned arrests. Bingham said Lin had “a stuberness of character,” a “love of the old laws” and “unlimited power” to deal with the opium issue.

An example of Lin’s personality shows through in an 1839 letter he authored, that was signed by the Emperor, in which Lin called out Queen Victoria, asking her where her conscience was.

“I have heard that the smoking of opium is very strictly forbidden by your country…Since it is not permitted to do harm to your own country, then even less should you let it be passed on to the harm of other countries – how much less to China,” he wrote.

“I have heard that the smoking of opium is very strictly forbidden by your country…Since it is not permitted to do harm to your own country, then even less should you let it be passed on to the harm of other countries – how much less to China,” he wrote.

There is some question on whether Queen Victoria ever saw this letter.

The British tried to negotiate, cajole and bully the Chinese into backing off, but that May June Lin shut down 13 foreign controlled factories, closed the port, confiscated more than 20,000 opium chests and then had them publically destroyed.

William Jardine, a Scottish physician turned opium trader, sailed for London to convince the government it was a matter of British pride, and more importantly, money, that required a strong show of force against the Chinese on the opium issue. Jardine’s business partner, James Matheson, had already laid the groundwork a few years earlier at Jardine’s request. It wasn’t long before Her Majesty’s government responded with force. Although, once this became known back home, Parliament debated the ethics of the move and of the opium trade, but with little result.

Under the direction of Foreign Secretary Lord Palmerston AKA Henry John Temple, British forces – 16 warships, including the iron-hulled Nemesis armed with Congreve rocket launchers, and more than two dozen transport ships with 4,000 troops – sailed to China and blockaded the Pearl River, near Humen, just south of Canton. They demanded reparations of £2 million to cover the loss of the confiscated opium chests. When the Chinese refused, the British attacked. In November 1839, the British sank a number of Chinese ships near Canton and over the next 2 ½ years attacked the coast and fought on land with deadly efficiency, killing an estimated 25,000 Chinese with a loss of less than 70 British troops.

The Empire shattered, the Chinese were forced to sign a treaty that gave the British Hong Kong (which they would keep until 1997), $21 million in reparations, the opening of four other ports to trade and most-favored nation status to Britain, among other concessions. In 1844, the French and Americans were able to extract similar concessions from the Chinese.

In 1854, the British insisted that the Chinese legalize opium importation to their shores and open all Chinese ports to trade, which helped spark the Second Opium War (1856-1860) that saw an easy British victory with the help of American and French support.

Following the first war, Indian opium had continued to flood into China and after the second war restrictions were all but eradicated. Eventually, China would begin to produce its own product. The country’s opium problem would last into the early 20th century.

Opium poppy production, and the resulting addiction to its component parts, continues today. Both heroin and oxycodone are derived from the plant and according to a United Nations report, a high prevalence of recent opiate use has been reported from Southwest and Central Asia, Eastern and Southeastern Europe and North America.

In the U.S., the 2013 National Drug Control Strategy reports that “heroin use appears to be increasing, particularly among younger people outside of metropolitan areas.”

The beautiful, and sometimes deadly, poppy has helped shape the destinies of nations and the lives of millions. It doesn’t appear it will be going anywhere anytime soon.