Startup Brings Fresh Food to Chicago, One Vending Machine at a Time

Farmer's Fridge vending machines dispense fresh salads and snacks, not junk food, to hungry Chicagoans at the push of a button. 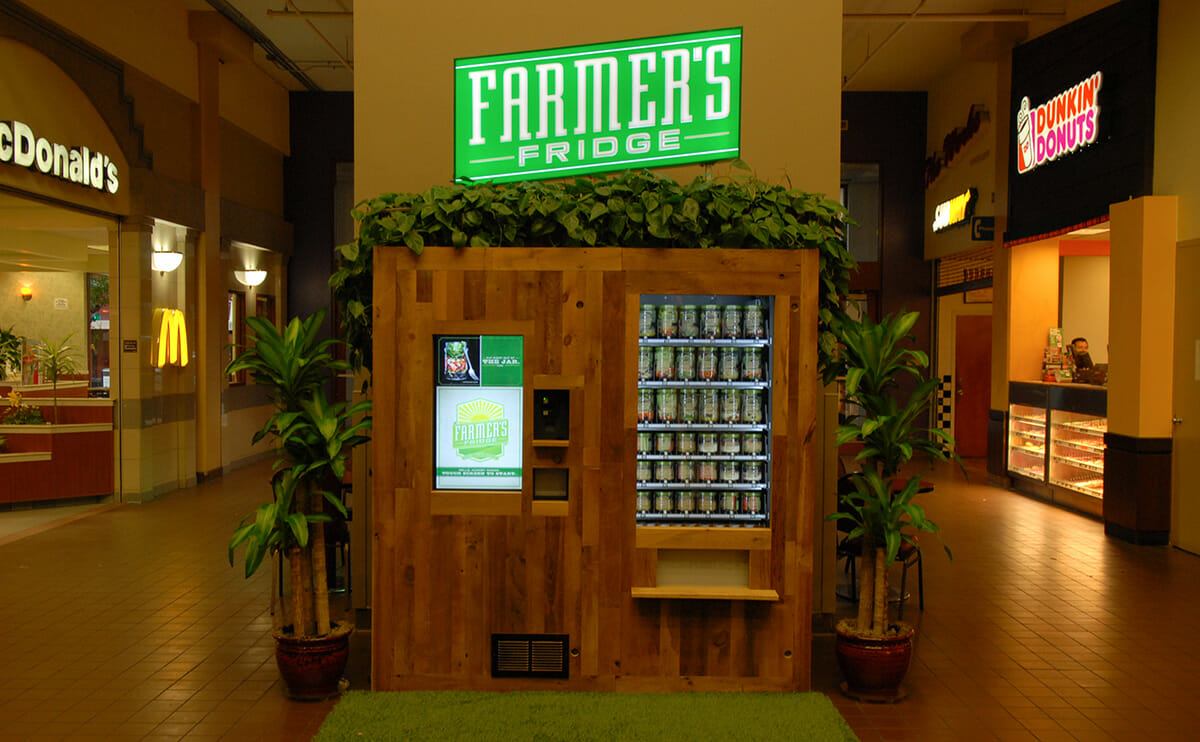 The machine also isn’t your standard combination of metal, glass and black plastic. Recycled barn week encases the kiosk and rather than an awkward push-button system of letters and numbers, users select their salad or snack via a touch screen display.

Fast food restaurants surround the company’s first kiosk in the Garvey Food Court just north of the Chicago Loop, which is strangely fitting. Saunders had the idea for Farmer’s Fridge as he traveled around the country for a previous job. Noticing that only big-name fast food joints had the capital to bring restaurants to rural places, he figured the only two things preventing distributing healthy food was a high upfront cost and convenience.

Saunders figured the only two things preventing distributing healthy food was a high upfront cost and convenience. A vending machine neatly solves both problems. It’s cheap to maintain — electricity costs about $10 a month — quick and easy to use.

A vending machine neatly solves both problems, he explains. It’s cheap to maintain — electricity costs about $10 a month — quick and easy to use.

Among the many menu options, Saunders prefers the Cheater salad. “It’s kind of like our version of a chef’s salad with eggs, cheese and bacon” he says.

The Cheater is named in contrast to the other salads, almost all of which skip on the animal products. Proteins like chicken and salmon can be purchased separately, however, along with a wide selection of drinks.

Once chosen, the machine dispenses the salad or snack in a clear plastic jar which can be brought back to the kiosk for the reuse. Saunders eventually hopes to offer recycling incentives to frequent customers.

As any one who has tried keeping salad leftovers in the fridge might guess, keeping the vegetables fresh was one of the initial challenges for the concept. Not only are the products restocked every 24 hours, but Saunders and his salad makers learned to layer ingredients help keep the ingredients crisp during the day.

Farmer’s Fridge has arrived just as traditional vending machines are gaining the attention of health advocates. Provisions in the Affordable Care Act require all large vending machine operators to display calorie counts with food items. Many of those operators have balked at the cost of implementing regulations, which the F.D.A. proposed last week.

At the moment, most of the customers coming to the kiosk are hungry office workers on their lunch breaks. To bring in a bigger crowd for dinner, Farmer’s Fridge marks a dollar off all items after 6 p.m. Whatever doesn’t get sold that day goes to a local homeless shelter.

The only thing Farmer’s Fridge needsto expand is, well, farmers. Getting started in the Chicago winter hasn’t offered Saunders many options for fresh produce.

“Any local farmers,” says Saunders, “we would love it if they got in touch with us.”

Los Angeles anyone? are you dialed in to any of our local slow food purveyors who might want to put their nutrient dense offerings in a Farmer’s Fresh Fridge and available to NBC employees and clients at our two sites for vendng machines on property in Universal City? not sure who is looking ..but Real Food Devotee or Culture Club 101 foods..in a vending machine..would be amazing..

0
Reply
Link About It: This Week’s Picks – COOL HUNTING – DEV

[…] Saunders prefers the term “kiosk,” but there’s no denying that his Chicago-based Farmer’s Fridge invention is actually a veggie vending machine. Built from recycled barn wood and sporting a […]