Could This Baby Bison Spark a Modern-Day Range War?

As small and innocent as he may seem, the light brown baby bull is living evidence of a movement to rid the American bison of both disease and genetic cattle traits. The hope among conservation groups like the American Prairie Preserve is that bison like him will help populate parts of the Great Plains in […] 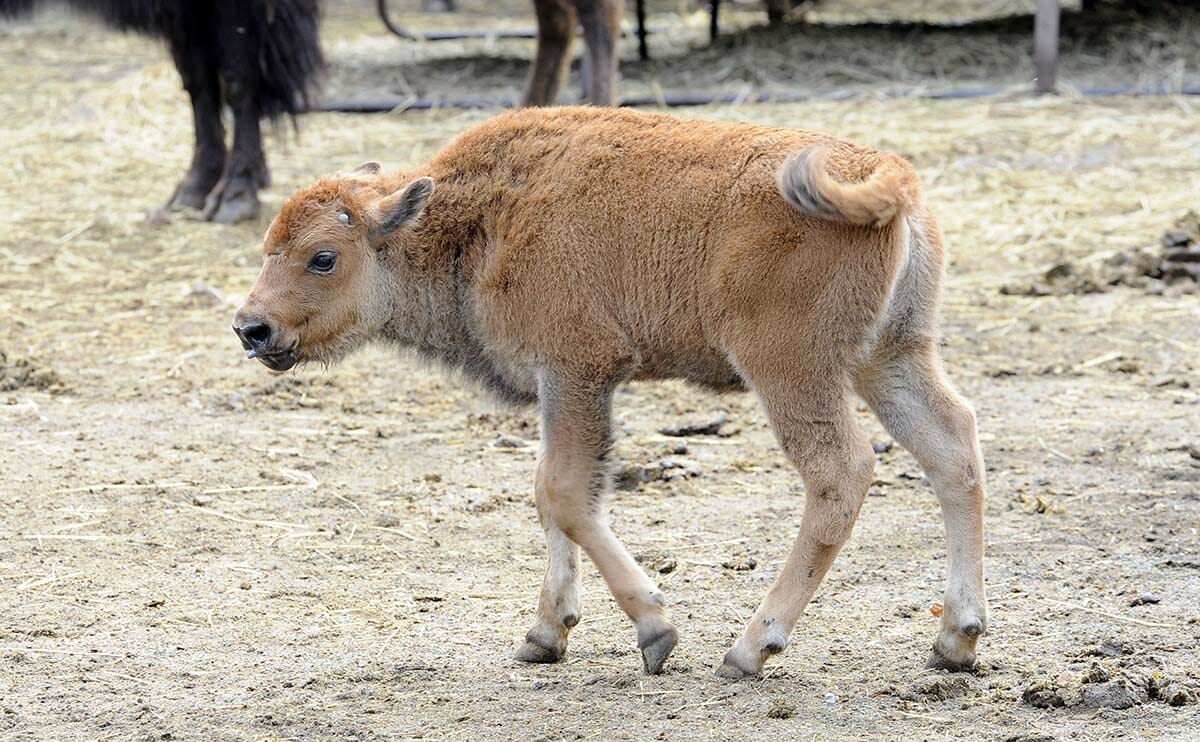 As small and innocent as he may seem, the light brown baby bull is living evidence of a movement to rid the American bison of both disease and genetic cattle traits. The hope among conservation groups like the American Prairie Preserve is that bison like him will help populate parts of the Great Plains in coming years.

While such an effort sounds noble, the ranchers worry that the increased reintroduction of free-ranging bison will cause environmentalists to rally against the industry. No one at the conference had spent more time writing and speaking on those worries than O’Neal, who raises bison with her husband W. Michael Rear at Red Canyon Ranch in Northern Wyoming. They have also published dozens of novels and histories on the American West.

O’Neal’s remarks came during a panel discussion titled “What Is a Wild Bison?,” which marked an hour of tension in what was otherwise the celebration of a growing and prosperous industry. Beef is still the king of red meats, but bison might be carving out a place as its primary alternative. Consumer demand for the leaner meat keeps outstripping supply, causing prices to almost double in the last five years. The good news has the NBA welcoming young ranchers into the industry and encouraging the older ones to increase their herds.

Standing before a sea of cowboy hats, O’Neal jumped right to the point. The movement to bring free-ranging bison back to the American landscape, particularly in Northern Montana, had the potential to spark “an old-fashioned range war” between ranchers and environmental groups. “This isn’t really about bison,” she continued, peering over a pair of reading glasses. “It’s about land: who owns it, controls it, how it’s used.”

Getting to the crux of O’Neal’s argument requires a foray into the history of conservation efforts around the species. Prior to 1800, there were more than 50 million bison roaming North America with minimal human intervention. But by the end of the 19th century, the species teetered on extinction. Fewer than 1,000 bison roamed the U.S. and only a few hundred were protected in Yellowstone National Park and Canada’s Wood Buffalo National Park.

A concerted effort by five ranchers — Charles Goodnight of Texas; James McKay of Winnipeg, Canada; Michel Pablo and Charles Allard of Montana and CJ “Buffalo” Jones — kept the rest from extinction. To this day, almost every bison on the continent, whether wild or domestic, can be traced back to one of those five herds.

As a result of those early ranching efforts, there are now more bison in the U.S. than there have been for 100 years. The NBA estimates about 220,000 bison in the U.S. live as a part of private herds. Another 30,000 woods and plains bison roam across North America without fear of the slaughterhouse. Conservation groups, like the International Union for the Conservation of Nature (IUCN), would like to see the number of free-ranging bison go up for the first time since 1930.

But the ranchers also had a mind for business. Some of the original five experimented with the interbreeding of bison and cattle, hoping to take advantage of the native species’ resilience. The efforts had a wide-ranging effect on the genes of the American bison population. Dr. James Derr, a geneticist at the Texas A&M School of Veterinary Medicine, claims that the majority of North American bison in both public and private herds display some degree of cattle hybridization. As a result, many conservation groups attempting to bring wild bison back to the prairie have pushed for a biological and legal distinction between pure bison and hybrid bison.

Furthermore, many conservation groups don’t trust ranchers as stewards of the species because they breed their animals as livestock, not as wildlife. Artificial selection aims for better meat and behavior as opposed to natural selection, which leaves bison to set the rules of their own evolution as a species. “Domestication, whether intentional or not, poses a special challenge to conserving the wild bison genome,” writes the IUCN in its conservation guidelines for American bison.

All this led O’Neal to ask: What if efforts succeed in cementing the language of “domestic” bison and “wild” bison in the law and in the public imagination? Bison could break fences, spread disease and compete for grazing land, but that wasn’t her chief concern. By her account, it would be a matter of time before environmentalists used the distinction to wrestle grazing leases from ranchers in the name of wild bison. Already, efforts to rebuild a habitat for wolves and grizzly bears have led to the retirement of grazing leases in the American West.

“I don’t think destroying family ranches to establish herds of wild bison can secure the future of the species,” she concluded. “I think only the people in the room can do that.”

As a result of those early ranching efforts, there are now more bison in the U.S. than there have been for 100 years.

Dr. Peter Dratch, a scientist for the Fish and Wildlife Service, followed O’Neal on the podium, saying, “I didn’t realize I had been walking into a range war.” He pressed the same point as the ICUN: Selective breeding could turn farmed bison into something much different from their genetic ancestors. Wild bison, allowed to breed as they please, would continue to resemble the ancestors or approach their original biology if they had been interbred with cattle.

Dr. Dratch shrugged. “Sure,” he said.

In the bustle after the discussion, I checked in with Dave Carter, who serves as the president of the NBA. I hadn’t realized I had been walking into a range war either. He brushed off all fighting words, urging collaboration between ranchers and environmentalists.

“We all want to help this beautiful animal,” he said. “So what can we do to work together?”