Sheeple, according to the wielders of the word, can belong to any number of flocks. You might be a sheeple (that’s a fairly common construction, “a sheeple”) if you: own a television, are on Facebook, watch “Breaking Bad,” hold any political opinion, are a fan of Lady Gaga, are a Keynesian, believe that President Obama […] 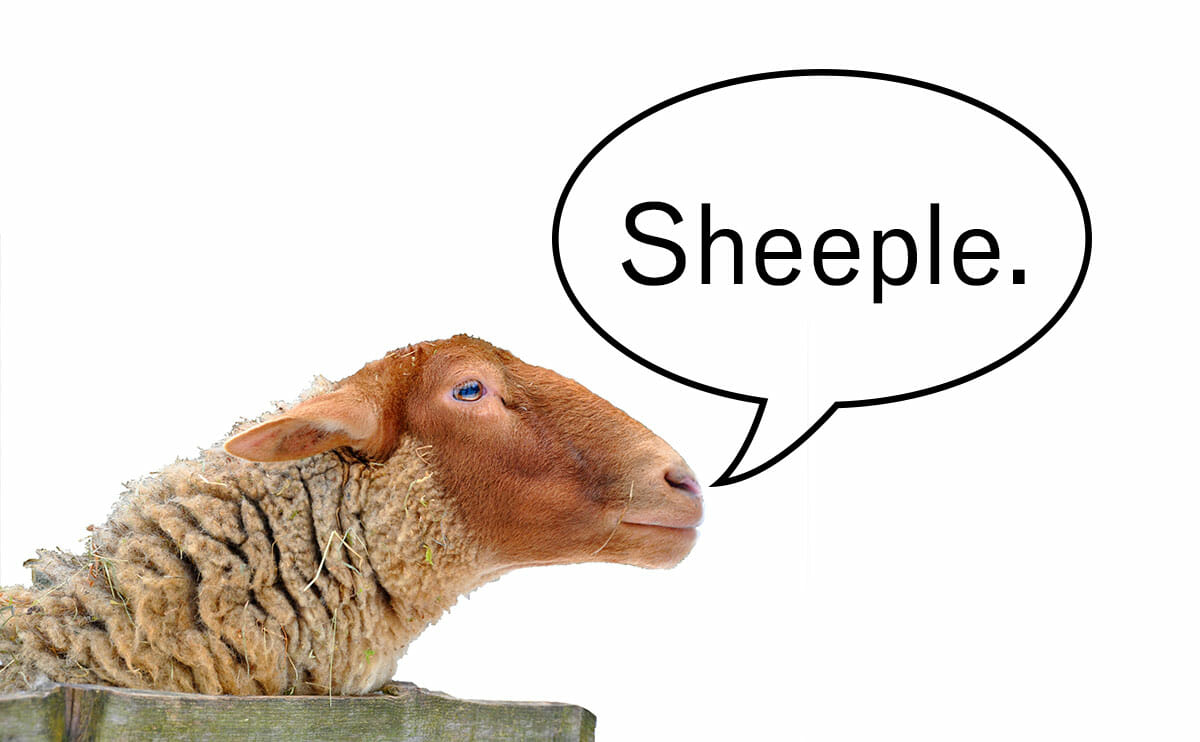 Sheeple, according to the wielders of the word, can belong to any number of flocks. You might be a sheeple (that’s a fairly common construction, “a sheeple”) if you: own a television, are on Facebook, watch “Breaking Bad,” hold any political opinion, are a fan of Lady Gaga, are a Keynesian, believe that President Obama is a secret Muslim, or believe that President Obama is not a secret Muslim.

Ironically, the people who use the word in a political context most often seem to be the same people who tend to parrot political talking points they have heard from the propaganda media.

This isn’t so surprising. According to WordSpy, the origins of the word date back to the heyday of the John Birch Society, the paranoid, vehemently anti-communist group whose members were nothing if not easily persuadable and themselves given to the most virulent kind of groupthink. (Although a look at Google’s book-indexing site Ngram shows earlier references, to the turn of the 20th century.) The earliest known published use of the word was in an article about the Society in the Wall Street Journal in 1984 where one member used the word to describe American taxpayers. All of them, apparently.

“Sheeple” gained more currency in the late ’80s and into the ’90s when conspiracy theorist William Cooper, the Alex Jones of his day, often used it to describe — well, pretty much everyone who didn’t fully buy into the multiple global conspiracies he believed in: everything from the Illuminati working in league with space aliens to the plot among world governments to destroy minority populations by inventing the AIDS virus.

But the word didn’t gain widespread popularity until the advent of Web 2.0 about a decade ago. That is, when Internet comments sections started to become popular. In recent years, “sheeple” has become so insanely ubiquitous and so indiscriminately applied that it seems to be used ironically at least as often as it’s used seriously. It might have once carried some bite, but we seem to have reached the point where the non-ironic use of it draws nothing but bemused contempt.

But who is a sheeple, really? Many if not most of us like to think of ourselves as free-thinking mavericks who aren’t influenced by trends or moved by group beliefs. But of course that’s poppycock. There are degrees to these things, but all of us are swayed by group beliefs all the time. The only difference — though it’s a big difference — is whether we recognize that fact, and try to maintain some intellectual integrity. The people who most often accuse others of being sheeple tend to do neither.

A simple Google search on “sheeple” and any given relevant topic (Obama, Lady Gaga, Keynes) will yield countless examples of people using the word to describe his perceived rhetorical enemies. But a pretty much perfect example might be the website The Daily Sheeple, which is filled with nothing but widely disseminated, copy-and-paste talking points: ridicule of Obama mistakenly saying there are “57 states,” accusations that Trayvon Martin was a “thug” who deserved to be shot by George Zimmerman, etc. There isn’t much on the site that could be described as original thinking. The site is aimed at “preppers” — people who believe in a coming catastrophe, probably due to a liberal takeover. And there’s a lot of stuff on there about investing in precious metals, the currency of a large American constituency that tends to think and act in hivelike fashion. The ironies abound.

While right-wingers seem to be the most apt to use the word, it’s actually a politically neutral term. Liberals use it, too. As do, for example, some fans of Eric Clapton who believe being a fan of,say, Jimi Hendrix is possible only through indoctrination via groupthink. If you use social media (or just the wrong kind of social media) you are a sheeple. You might be a sheeple if you use an Apple product, the Linux operating system, or, lord knows, Windows. Sheeple believe in the science behind global warming, and the science behind genetically modified crops. They think fluoridated water is harmless and that your cellphone won’t give you cancer.

Of course, the comparison of supposedly easily manipulated people to sheep goes back way further than the word sheeple (which itself was no doubt used long before the John Birch Society was organized — it’s a pretty obvious construction, after all.) In the Bible, the word sheep is often used in a positive way to refer to the flock, whose shepherd is God.

Both George Orwell and Roger Waters of Pink Floyd (in his Orwell-derivative work “Animals”) described sheep (as a symbol for certain humans, of course) in ambivalent terms. In Orwell’s “Animal Farm,” the sheep mindlessly parroted (if you will) the slogans issued by the ruling pigs, such as “Four legs good, two legs bad” (a rule that changes, as rules often do under propagandist governments) when the pigs begin walking on two legs. And the sheep just go with the change, perhaps not even recognizing that anything changed at all.

But Orwell recognized that it was ignorance, not venality, the drove the sheep. Waters treated sheep similarly in “Animals,” where the sheep are described as “harmlessly passing [their] time in the grassland away” before being set upon by the dogs.

In a passage that could easily apply to many Internet commenters, many of whom consider themselves modern-day Orwells themselves, Waters warns the sheep as they munch on their grass and allow themselves to be led this way and that: “things are not what they seem.” They are “meek and obedient” and “follow the leader” until they realize they’ve been wrong all along. In the end, though, tragically for the sheeple, it’s too late to change.