Meet the Nashville Chef Who Raises His Own Beef

The chef and managing director behind Nashville's Hermitage Hotel delve into the business of cattle farming. 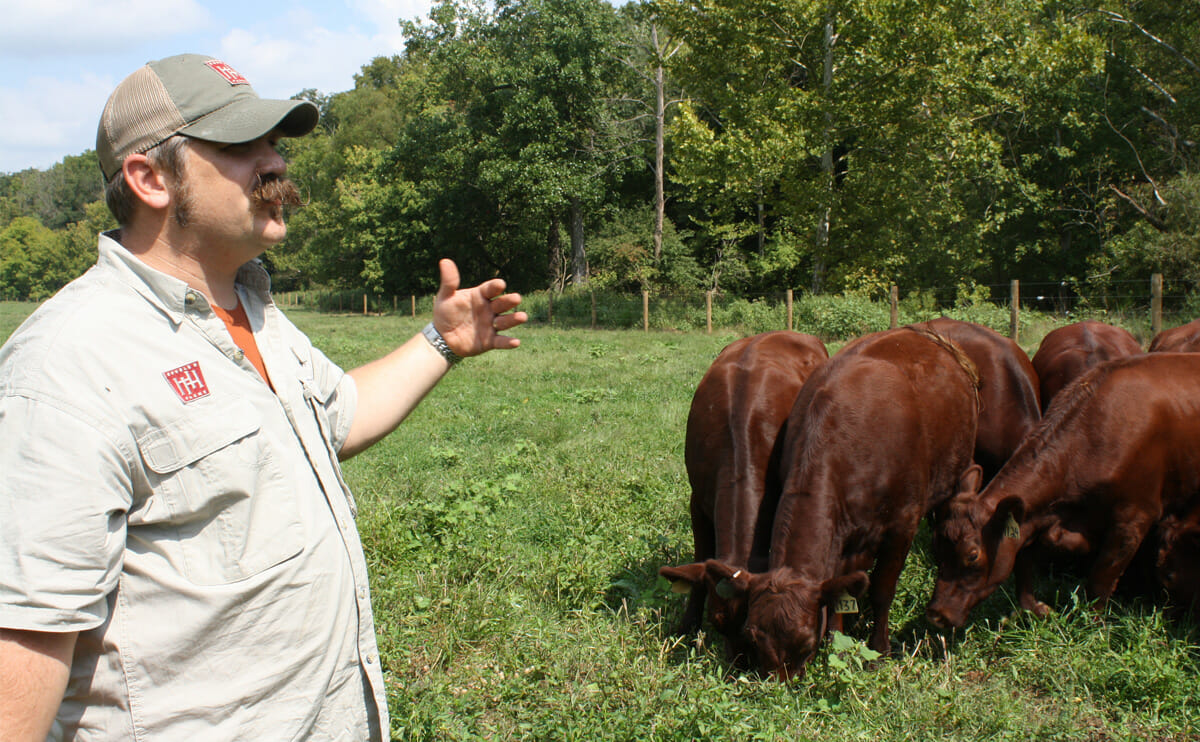 Ask chef Tyler Brown what he did at work today, and instead of giving you a rundown of his grueling night on the line or how many covers his staff served dinner, he’ll tell you about the protein levels in his grass, how a field works like a solar panel and how productively his heifers are grazing. The executive chef of Nashville’s Capitol Grille, inside the Hermitage Hotel, is running an upscale restaurant by night – and immersing himself in the educational process of raising beef cattle by day.

Like many chefs today, Brown has a restaurant garden, where he and a team of coworkers, including the hotel’s managing director Greg Sligh, harvest a significant amount of the greens, herbs, tomatoes, turnips, carrots and onions that go onto his menu (as much as 80 percent at times). Situated on the 66-acre Farm at Glen Leven, a piece of property preserved by the Land Trust for Tennessee, the two-acre garden is both an experiment and a preservation project. The land has ties back to the Revolutionary War and once supplied vegetables and hogs to the Maxwell House, a hotel that was adjacent to the Hermitage Hotel until it burned down in the 1960s; Brown started the garden in 2009 with an interest in working with heirloom Southern varieties as a way to reestablish old foodways.

But vegetables weren’t quite enough for Brown and Sligh: With help from a local farmer, they started experimenting with a few head of cattle at Glen Leven a few years back. The beef made it onto the menu at the restaurant and was met with rave reviews. In 2012, the pair took it one step further and convinced the hotel-property owners to purchase a 245-acre farm just west of town to start a cattle operation, dubbed Double H Farms, which, once it reaches its full potential in about 2 or 3 years, will become the primary beef supplier for the Capitol Grille.

“Beef felt like it was important. A lot of people take for granted the sacrifice and what it took to get an animal to the plate. It’s losing its life for our sustenance,” Brown says, standing in the fields at Double H in front of a herd of red poll cattle. He reaches out to one of the animals, feeding it a pellet of grains. “I wanted to go through it. To take the thing to the processor and feel that.”

“Beef felt like it was important. A lot of people take for granted the sacrifice and what it took to get an animal to the plate. It’s losing its life for our sustenance.”

Brown’s appreciation for his new way of life and the education he’s receiving is palpable. (“It’s like, you’re actually letting me do this?” he grins, almost sheepishly, at the thought.) Same goes for Sligh, a lifelong hotel executive who also happens to have a bit of farming experience. He grew up visiting his grandparents on their 600-acre property in Granville, Missouri. “They were sustenance farmers. Everything on the table came from their land,” he says. Together, Brown and Sligh are learning how to get a sustainable cattle operation into production.

In one year, with only part-time help from a local father-son team, the two have shuttled themselves between the farm and their full-time jobs at the hotel to build fences around the entire perimeter, clear fields, install more than 25 gates, purchase tractors, haul debris and, of course, work the cattle. Their herd is now 120 strong (a mix of shorthorn galvey cross and red poll), which equals 120 animals that they have to graze, tag, weigh, breed and, every now and then, castrate.

Brown raises an eyebrow talking about the first time they “worked,” or penned and sorted, the animals. “The guys helping us said, ‘we got a bull here, we’ve got to [castrate] it.’ And they give me this pocketknife. [… ] That was intense. It was the first time I’ve ever cut a bull. But you’ve gotta do it. You can’t be scared of it, just go home and reflect on it later.”

Moments like this have shaped their experience. “We could have 20 people working out here working and Tyler could just call and say, How are those cattle?’ But we agreed that we would start by doing everything ourselves so that we knew what went into it,” says Sligh. That means early mornings on the farm followed by late nights in the hotel, or vice versa depending on that day’s chores – with a stop at Glen Leven in between. Brown gets frazzled, he says. “I want to be able to put my hands on everything at any given time. All of it is really overwhelming – and that excites me.”

Both admit that they’re still gaining an understanding for the land, the grass, the animals and how all of those components will function together. “The cows have so much space, they’re discerning what they’re eating. But because they’re all over the place, there are nutrients that don’t exist in certain areas yet. The organism isn’t pumping on all cylinders, if you will,” says Brown.

A visit to Joel Salatin’s Polyface Farms in August gave the two a new appreciation for rotational grazing; they’ve started experimenting with small paddocks roped off by electric fencing, putting 60 or so animals in for a day or two at a time. Zipping past the area on a four-wheeler, Brown points out a one-acre patch brimming with newly grown clover – it was grazed down to almost nothing a few weeks before. “Once we work the animals next week, we’ll have them out here to graze this down again,” he nods. “It’s all trial and error and seeing what works.”

The team is grain-finishing the cattle for 90 days before sending them to the processor, just two at a time right now. Those two cattle will yield about 35 apiece of each steak, which, once labeled on the menu and Tweeted about, will quickly fly out the door at the Capitol Grille. (Double H is also supplying beef to a few other local restaurants, like the newly opened Husk Nashville.)

Meanwhile, when he’s not harvesting vegetables at Glen Leven, or working the cattle at Double H, Brown still has to cook and manage a kitchen crew, all of whom are now scheduled to be at the Farm at Glen Leven three days a week. That’s where Brown is starting to see the dividends pay off.

“My hopes are that we develop a culture where if the guy on garde manger is going to the garden tomorrow, then he needs to be aware of everything happening with vegetables that day so that he can cover the guys on sauté,” he says. “As [we all] get a more total awareness, the culture only grows from there.”