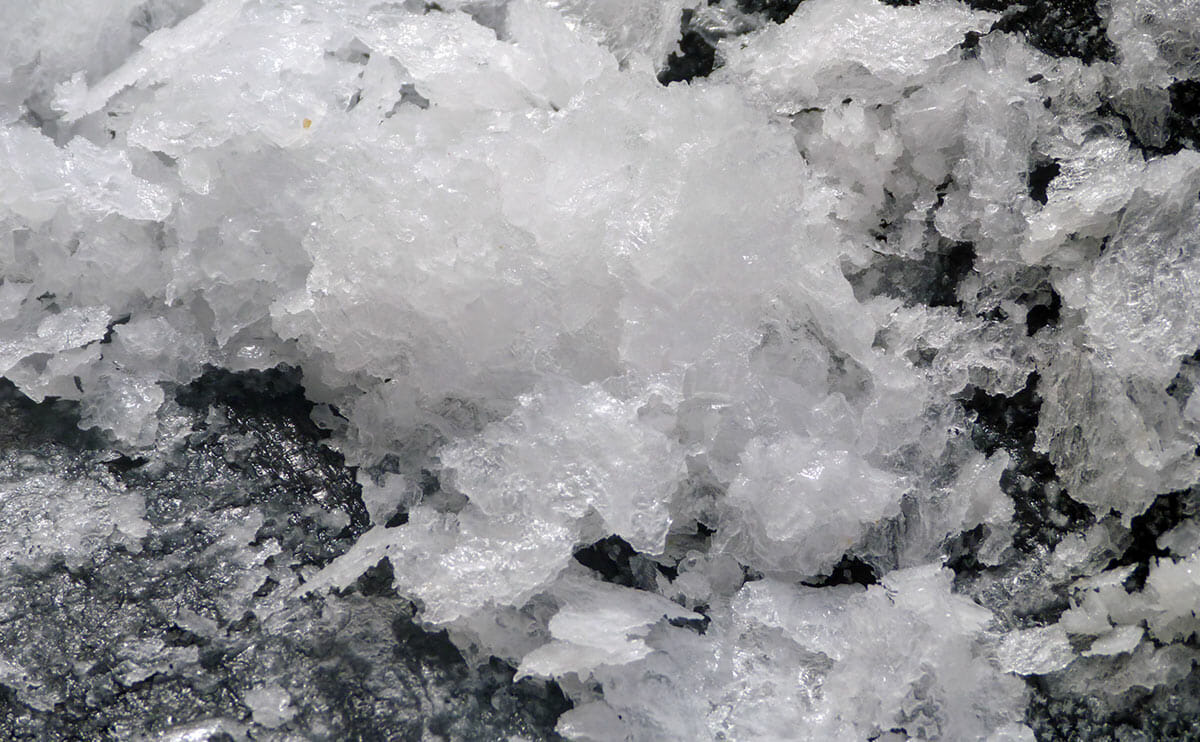 “Let’s not forget the gypsy moths,” Feldman says about the blight that caused her to stop a five-year operation she ran with her husband, Curtis Friedman, selling the shiitakes to restaurants on the Massachusetts island of Martha’s Vineyard.

Today, Feldman and Friedman are making waves with their newly-launched Martha’s Vineyard Sea Salt, the first local business to produce sea salt commercially since the 1800s on the 87.4 square-mile island off the coast of Cape Cod.

Feldman, a tech consultant-turned-entrepreneurial farmer (who sometimes still works with computers to pay the bills), and Friedman, a carpenter, moved to the Vineyard from the Jamaica Plain neighborhood of Boston in 2001. Sick of corporate ladders, subways, and business casual, they went looking for a life where they could get some dirt under their fingernails.

They bought 9.63 acres on the Vineyard in the middle of what used to be an oak forest and two years later, established Down Island Farm with some goats, a few chickens and ducks, and a couple of peacocks. They had dreams of growing produce, but the soil on their Vineyard Haven property is pretty much all sand. So they got creative, turning to edible flowers and later the shiitake mushrooms, which grow right on old oak logs. Perfect, they thought. And it was — until the plague of insects descended.

Feldman was crushed. The couple threw around ideas for a new venture — hops for local beer, sugar beets or potatoes for local vodka — but nothing stuck. One day, Feldman was in her car hoovering (her own words) a bag of Cape Cod Sea Salt & Vinegar potato chips for lunch in between clients. “And it just dawned on me,” she says during an interview on the couple’s front porch. “I turned the bag over to look at where they got their sea salt and all it said in the ingredients was, ‘salt.’ I thought, ‘Is anyone on this island making sea salt?’”

She asked around and heard of a local chef who had tried his hand at making his own sea salt. She talked to a few old timers who made their own all winter. But no one was producing it commercially or selling it. “The next thing I knew I was down at the ocean thinking to myself, ‘OK, let’s try this,’” she says.

“The next thing I knew I was down at the ocean thinking to myself, ‘OK, let’s try this.’”

Before the invention of modern-day refrigeration, salt was essential to life on Martha’s Vineyard — and throughout the colonies. Salt preserved food, made it more palatable, and was used to tan hides and pack fish for trading — all important to the Vineyard’s economy. Before the Revolutionary War, salt was imported from the West Indies to the Americas, but the war cut off the supply chain, forcing colonial residents to produce their own. According to the “Dukes County Intelligencer,” the first known saltworks on the Vineyard was up and running by 1778. By 1807, salt manufacturing was the island’s second largest industry. Salt production declined on island after the War of 1812 and it appears that the last operating saltworks on island had stopped production by 1850.

Fast forward to spring 2013. After three years of trial and error and over-salted and under-salted meals, Feldman and Friedman formally launched their local sea salt business, bringing a piece of island history back to its roots.

“When I first started researching this, I reached out to the Department of Public Health lab in Jamaica Plain and asked about what kind of regulations had to be in place to use local seawater in sea salt,” she explains. “They said they didn’t know ”“ that no one had commercially produced sea salt here since the 1850s and that back then, there wasn’t any legislation needed.”

About once a month, the couple drives their truck out to the island’s south shore very early in the morning to collect seawater, using a hose to fill a 275-gallon tank. They haul it back to the house and pump the seawater into a 76-by-12 evaporator Friedman built on the outskirts of their property. It looks sort of like a greenhouse. The pump filters any sand, seaweed, or aquatic life (which Friedman collects and feeds to the chickens) out of the water. Once the water is in, it’s just a matter of time — and sun.

The evaporator, which is totally heated by solar power, can reach over 120 degrees inside. The heat causes the water to slowly evaporate, which can take anywhere from two-and-a-half to 10 weeks depending on the weather (hot and dry is optimal). As the seawater evaporates, the salt is left behind, slowly turning from clear to opaque to solid, and forming piles of crumbly crystals. The couple knows it’s ready to harvest when a crust forms on top. Donning sterilized Crocs, they rake it and collect it in tanks that once belonged to a now-shuttered winery down the road.

The next step is the dehydrating room (the former guest room), where they rotate small batches of salt into a dehydrator.

Each 275-gallon of seawater produces about 60 pounds of salt, which is packaged in two-ounce bags (eco-friendly and produced by Heidi’s sister’s company, Eco-Bags) and .4-ounce glass jars (Heidi tried tin containers, but worried it would alter the salt’s flavor).

Feldman and Friedman produce two different grades of salt ”“ a coarse, natural grade known as “traditional salt” and sel gris, a more mineral-dense, moist salt. They also play around with different flavor blends, all made with local ingredients. At the time of the interview, they were experimenting with an applwood-smoked sea salt, which left the dehydrating room smelling like the early stages of an apple pie baking. The finished product is more moist and tastes brinier than the sea salt you’d buy in a store. Feldman says it’s best used to finish a dish.

The couple sells their salt through their website as well as at summer and winter farmers’ markets on the Vineyard. The salt can also be found in dishes at local bakeries and restaurants, as well as in the chocolate and sea salt-covered espresso beans at a local chocolate shop. Feldman says they plan to keep the salt local for at least another year, though they are in talks to provide to two off-island restaurant chains. Feldman would not name names, but said the deals would mean big things for the little company.

With winter around the corner, the couple expects production to quiet down a bit — they predict a typical harvest season will run April-October because of the weather, but don’t know for sure. Feldman says already she has cut back on the tech consulting that she does, and hopes that one day, this will become a full-time gig.

“More and more, people want to know that their food hasn’t been fiddled with,” she says. “That it hasn’t been tweaked in any way, shape, or form. And I believe that people want a story, something that they can hold onto when they are eating something.”

When she set out to farm on the Vineyard, Feldman didn’t know that she’d wind up producing something with such historical ties to the island. But it seems fitting.”It’s one thing to find something you really like doing,” she said. “It’s another thing to find a place you love, and then to figure out a way to make your life happen around it. That’s what it was for us.”

Julia Rappaport is a recovering food journalist who is now Managing Editor of Communications and Social Media for a Boston-based international education non-profit. Her award-winning writing has appeared in the Washington Post, the Boston Globe, the Boston Herald, the Boston Phoenix, the Vineyard Gazette, and a number of magazines, both online and in print. You can follow her at @Julia_Rappaport.

(All photos except for picture of Heidi and Curtis courtesy of Jerimiah Turits.)