How farmers use fake bird calls and propane cannons to keep their crops safe. 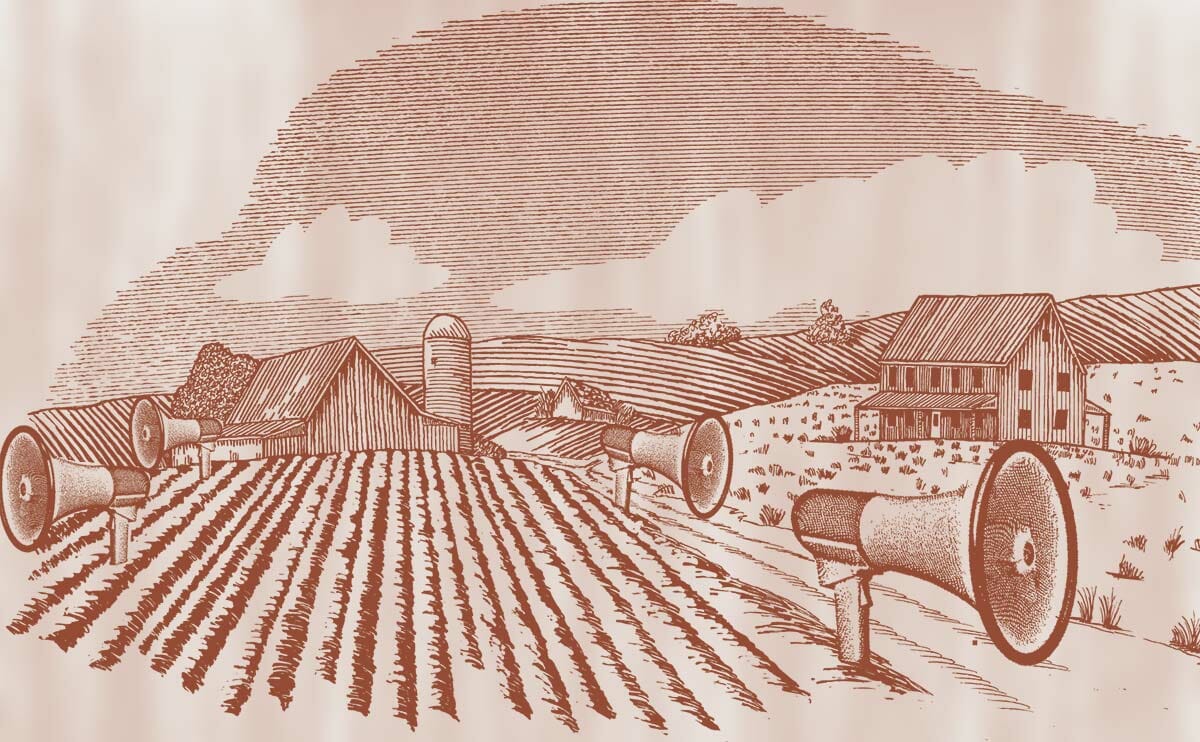 The “hawk” was a sonic illusion created by a recording. Audrey Gambino, who had been softly talking with a group of visitors out in her vineyard, Villa Milagro, now explained that she plays the recording to deter birds that dine on her grapes, like robins, grackle, and starling. The recording tricks birds. They think a predator is dive-bombing down with talons clenched. They stay in the woods and away from the grapes.

For this scare tactic, Audrey and her husband, Steve, rig the vineyard with nifty speaker-transmitter systems known as Bird Gards. They use five. The devices can play variable cries of various predatory birds, including the red-tailed hawk and the feared peregrine falcon, a winged raptor that can speed to a sparrow’s throat at 200 miles per hour. Not only do these played-back calls keep small birds at bay, Steve says, they can also attract actual hawks who want to see what’s up. A Bird Gard can also play species-specific distress calls. Got pain-in-the-ass finches? Put in the right computer chip, and your speakers will serenade them with chirps and tweets that will trick those birds into staying away. This – a device that uses sound to repel animals – is called an Acoustic Harassment Device or an Auditory Deterrent Device (ADD). ADDs have been used on farms since at least the 1980s. They’re a clean, chemical-free solution. Even still, some like them, some don’t. It depends on the device.

Bird Gard has plenty of fans. After planting Bird Gards, Audrey says that all of Villa Milagro’s avian grape poachers fled but one. “We had this one bird that continued to feed,” she says, “so we sent a photo to Bird Gard’s headquarters in Oregon. They sent back a new chip. The bird stayed away.” It was a species of thrush. Now that the system cycles through thrush calls, they too stick to the woods.

Bird Gard claims to protect against crows, pigeons, robins, swallows, sparrows, rooks, finches, blackbirds, heron, geese, wild turkeys, and, in total, 100-plus species of birds. The folks at HQ can change up the calls on a system depending on which winged creatures are haunting you.

Other ADD devices exist. There are Bird Gard analogs for deer. Many of these motion-triggered contraptions emit ultrasound, sound that we can’t detect but deer can. Salmon farms in coastal Canada use underwater ADDs to keep seals from feasting on penned up fish. In experiments, ultrasonic ADDs have had some success in preventing bats from entering the orbit of wind turbines. Regular ADDs prevent birds from raising hell at airports and from crapping all over boats at marinas.

However, there is one very, very controversial ADD: the propane cannon.

You may have heard it. A colossal, apocalyptic booming that splits the sky and rumbles out like a peal of thunder. When I first heard the sound, I thought a hunter had just obliterated something with a shotgun rigged for sonic prowess. Birds darted out of the clearing where the cannon was.

How could they not? It sounded like Fort Sumter was about to be bombarded to powder. A propane cannon’s blast can easily hit 120 decibels. Some even reach 140, an obscenely loud level. The tripod-mounted cannons have proven successful in deterring animals in some cases and unsuccessful in others. Steve notes that smart birds can adapt to the boom.

Some neighbors, however, can’t. Imagine a cannon going off at random intervals within earshot of your living room. That could make for a relationship that even a sturdy fence couldn’t save. For that reason, groups such as the Oregon Winegrowers Association have developed best practices for using propane cannons – place as far as possible from neighbors, only fire during daylight, never aim at a pasture that livestock call home. But even this doesn’t satisfy some neighbors, who have joined forces to protest the noisiness of the cannons.

A menace or not, the implications of ADDs are interesting. Perhaps one day we’ll be able to use ultrasound or recordings to protect crops from a wider range of pests. You never know. Just like the birds, I still find myself auto-scrambling for cover whenever I am checking out a vineyard or orchard and, out of nowhere, a cannon booms.

Related
MTMF
How Saving Seeds Is Helping This Modern Farmer Reconnect With Her RootsBevin Cohen
Future of Food, Plants
Scientists Grow Plants in Moon Soil for the First TimeShea Swenson
Environment
High Winds Are Rattling US Farmers This SpringSarah Kuta
Food & Drink, Technology
How High-Pressure Processing Is Helping Remote Farmers Bring Fresher Foods to MarketNaoki Nitta
wpDiscuz
We use cookies on our website to give you the most relevant experience by remembering your preferences and repeat visits. By clicking “Accept”, you consent to the use of ALL the cookies.
Cookie settings ACCEPT
Privacy & Cookies Policy