Modern Farmer: Why’d you start shooting agriculture and pig slaughter? Sheri Giblin: Well, as a food photographer it was only kinda natural to gravitate to agriculture images too. I live in Brooklyn now, but I lived in California my whole life. I lived in a rural area, though I also lived in San Francisco for […] 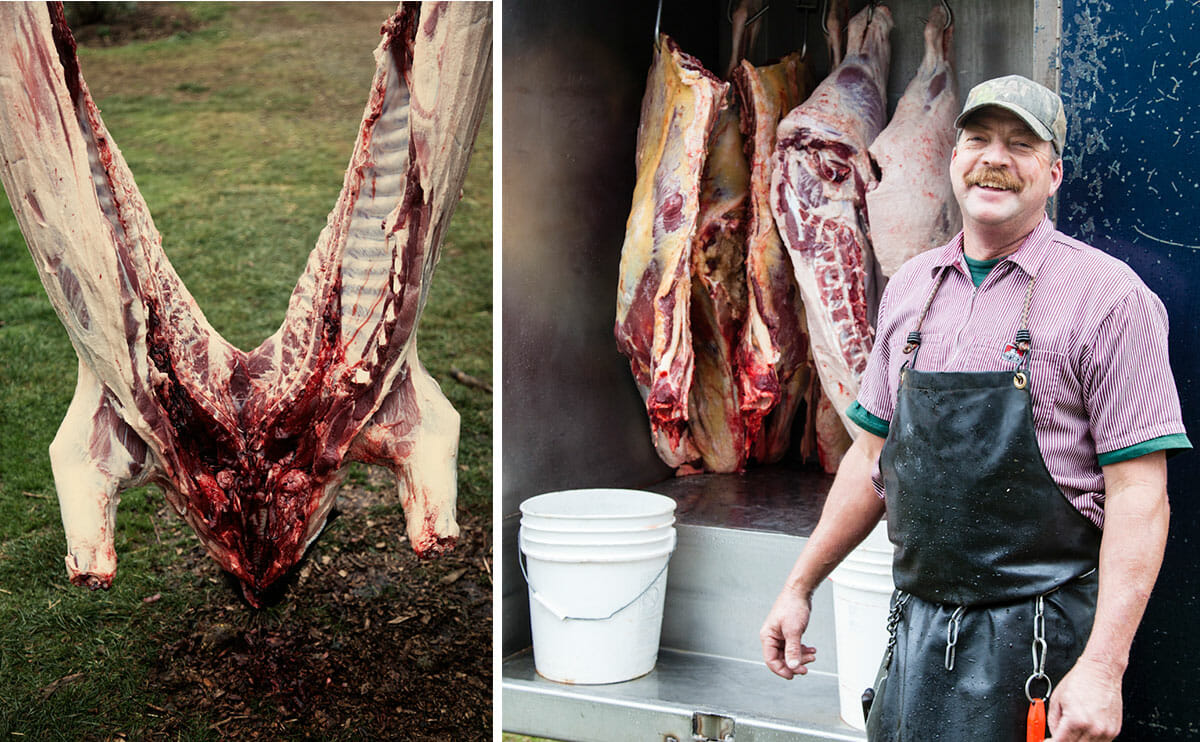 Sheri Giblin: Well, as a food photographer it was only kinda natural to gravitate to agriculture images too. I live in Brooklyn now, but I lived in California my whole life. I lived in a rural area, though I also lived in San Francisco for 20 years. And my work, touching on the animal slaughter, has that in it. 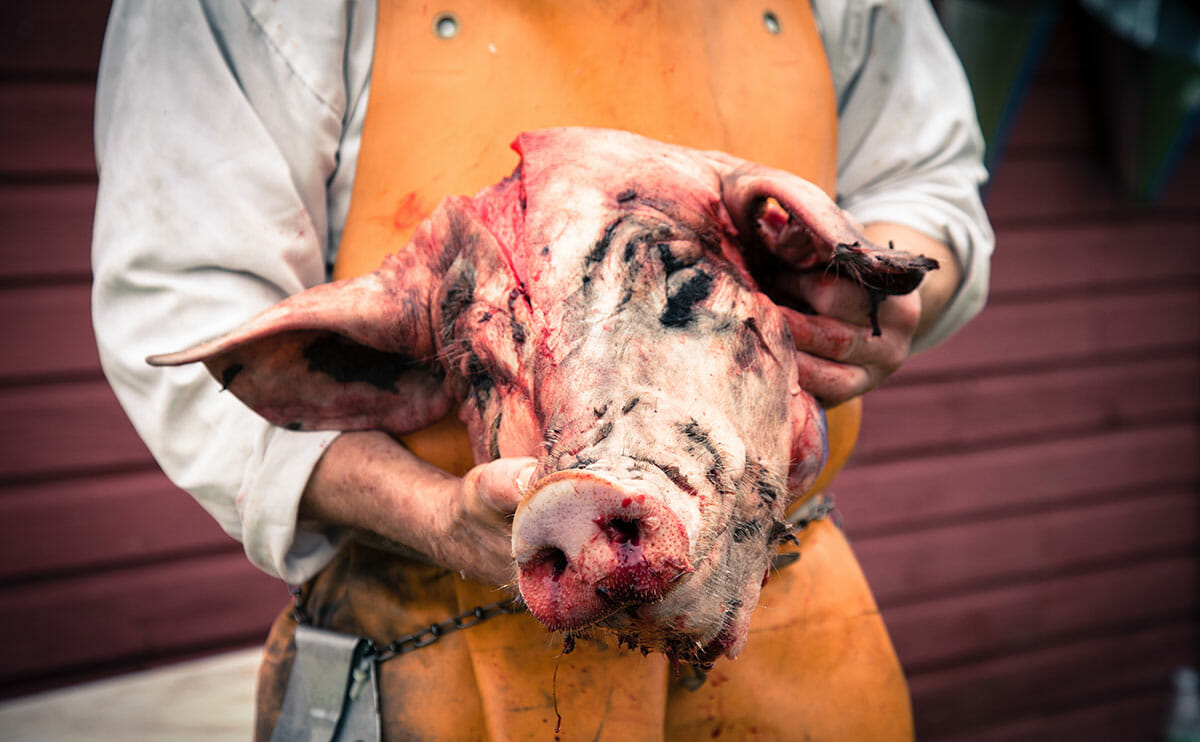 MF: So, the pig slaughter: How do you shoot something that’s on the one hand so horrifying, but also so beautiful?

SG: Good question. I just got this idea this idea in my head of of “Wow, I really wanna shoot this.” And some of it comes from the books I read. I’m a fan of Michael Pollan and “The Omnivore’s Dilemma,” and I eat everything. So as an omnivore I felt it was my responsibility to witness where my food came from, not just the pretty package in the store. And as a photographer, I was compelled to photograph that experience. I’ve seen chicken slaughtered, and my dad was a deer hunter, but I’d never seen a mammal slaughtered. So I had that idea in my head that I really wanted to experience it and photograph it. There were two different slaughters that I shot, and they were very different. The first one — you know, it was interesting, it was hard to find someone to let me photograph it. Especially in Northern California, I was surprised. 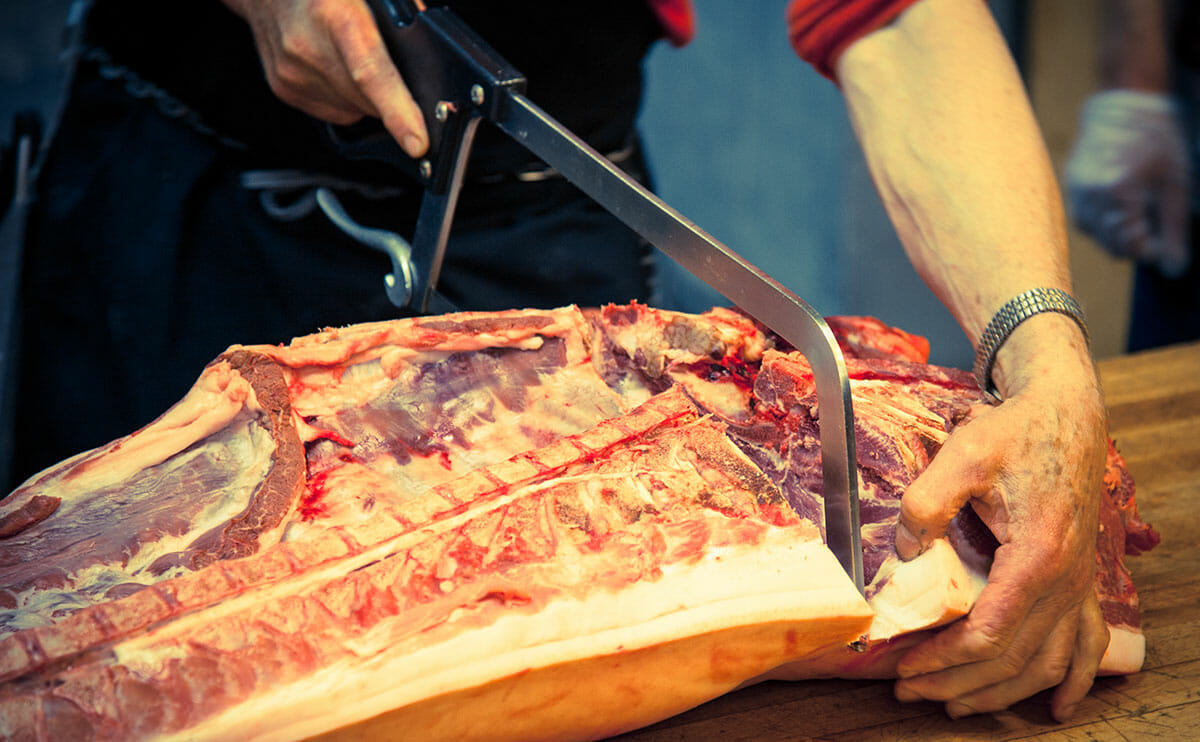 MF: Do you think that they’re scared if they see pictures of slaughter they’ll stop eating meat?

SG: No, I think they are afraid of animal rights activists, showing up on their property and protesting. Maybe that’s very Northern California, actually. [laughs]. But yeah, I mean, some of it is a bit gruesome. And honestly, I wasn’t prepared. I thought they would tazer the animal, so when the slaughterer just put the gun to the boar’s head and the bleeding out of the animal, it was a little, uh, jarring. But then again, this is something I had not witnessed before. It did happen in a very organic natural way – the animal bled out back into the earth. I asked slaughterer why the animal was not tazered first, he reassured me that a shot to the head instantly kills the animal so they do not suffer. So there is no need to use a tazer. But at the same time, both slaughters that I photographed were about a humane way of slaughtering and very much about farm-to-table. But the way I captured it in my photos, is my style of photograph, it’s whatever I got drawn to. There’s this strange beauty to some of the animal parts. And I also was very interested because the pig is the animal that’s most, anatomy-wise, human. Which was interesting. 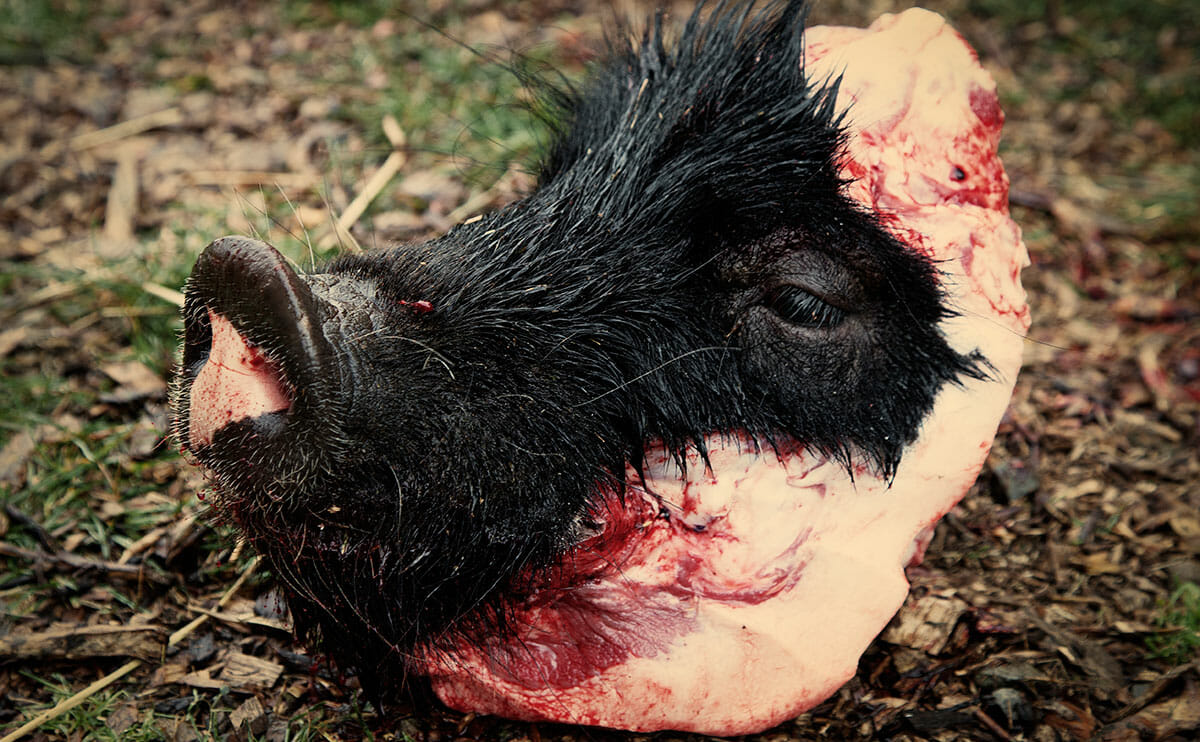 MF: What part of the slaughter surprised you the most?

SG: Probably the shot to the head. 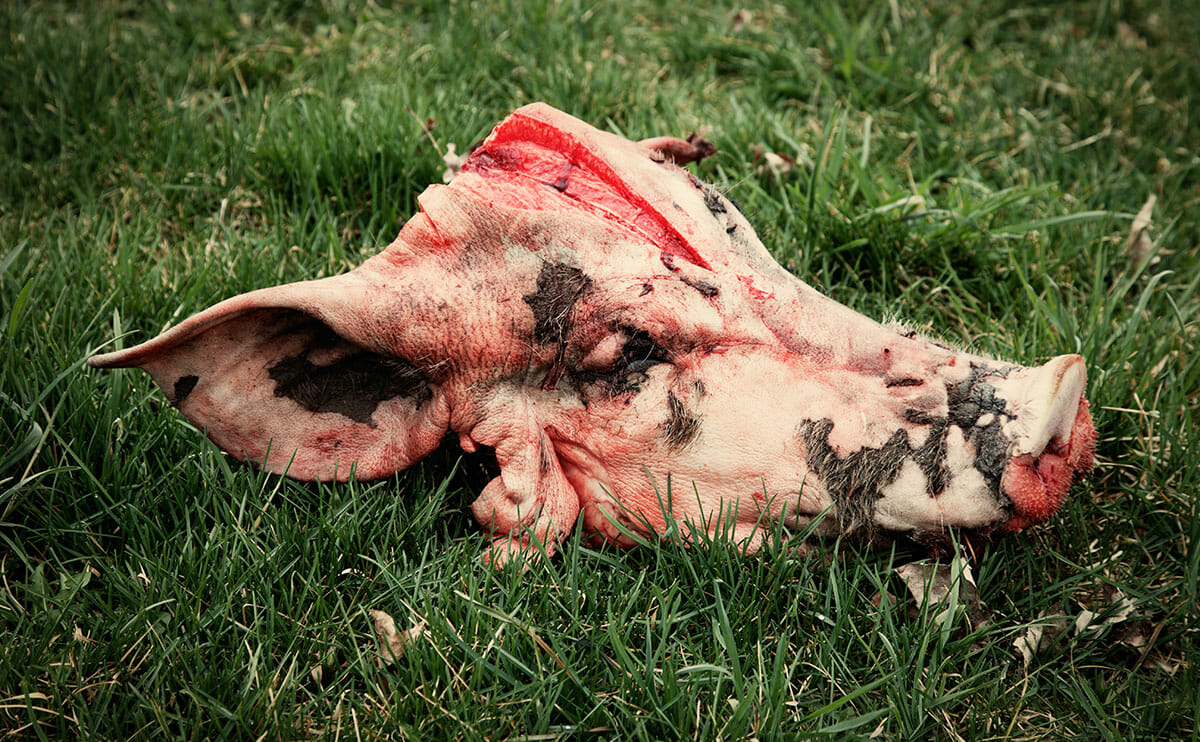 MF: Did you always shoot food and agriculture?

SG: As a commercial photographer I specialize in food and lifestyle photography. The lifestyle part incorporates photographing people around the themes of food, travel, entertaining, agriculture, and so on. Commercially I have photographed everything from ad campaigns for the Chobani Yogurt and Dominos Pizza to cookbooks for Williams-Sonoma, national magazines or food packaging, In my personal photographic work, like any other artist, I photograph whatever I am compelled to explore and express. 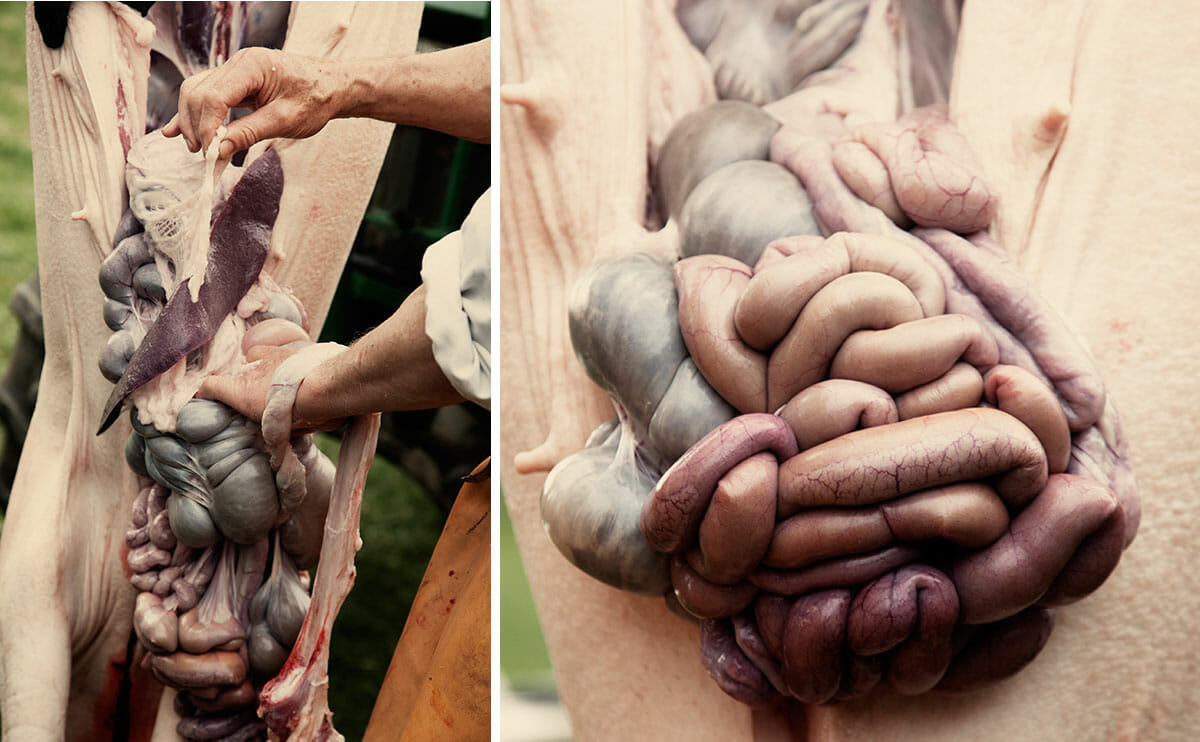 MF: So after watching this slaughter and shooting it, what was it like eating your next piece of pig?

SG: Watching & photographing both slaughters did not shy me away from eating pork if that’s what you are asking. I do feel more respect for the animal, and I want to know more then ever where my meat is coming from. Meaning, I try to buy only from local farms. I understand much more what makes for a humane slaughter. The second slaughter, which occurred in upstate New York, included a lesson in butchery at the local butcher shop so I know all the animal parts — where they come from now. So when I do to cook pork, I’m understand it more. I mean chefs, they know all that, all the parts of the animal. So it’s great for your repertoire as a home cook.

All images are courtesy of Offset, a new stock photo agency with carefully curated collection of exceptional images from top artists around the world.