Templeton Rye was a red-hued whiskey that brought "fame and fortune” to the bootlegging farmers of the tiny town of Templeton during Prohibition. 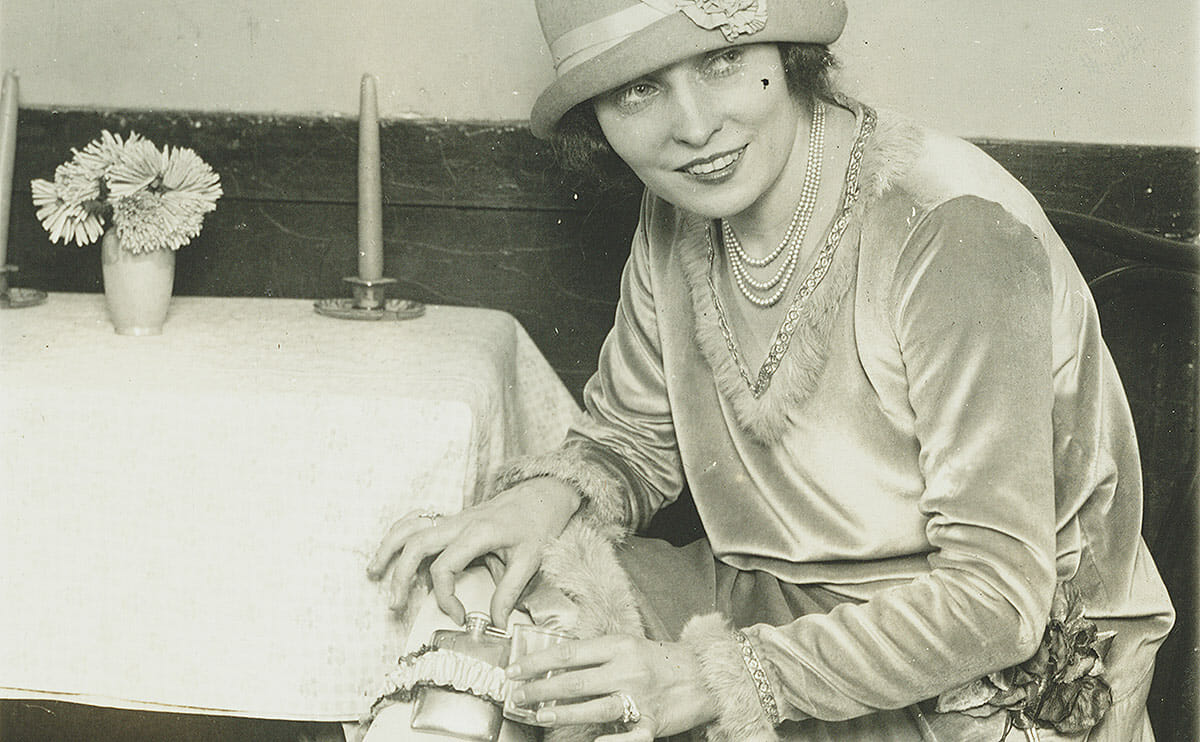 A dancer shows off the fad for garter flasks during Prohibition, in a photo from 1926.
Photography Courtesy Library of Congress
Share
Tweet
Pin
Email
2K Shares

Templeton Rye was a red-hued whiskey that brought “fame and fortune” to the bootlegging farmers of the tiny town of Templeton (pop. 373 in 1920) and the rest of Carroll County, according to a news account of the time. It became as important, if not more so, than the typical agrarian pursuits in this rural area, bringing in much-needed revenue.

The farmers first began distilling corn liquor, but soon turned to producing rye whiskey. Both crops were plentiful, but it was rye — which imparted complexity to the alcohol — that the people wanted. And they got it. At the height of its production as many as three trucks weighed down with the whiskey left Templeton a week, destined for the big cities of the Midwest and further afield.

The farmers’ new pursuit brought the unwanted attentions of state and federal law enforcement officials. Considering the huge amount of illegal alcohol the county’s residents were producing it was no surprise. If convicted of the crime a large fine or six months in jail were possible penalties, but for the moonshiners it was worth the risk.

Federal authorities estimated that one farmer outside of Templeton, Frank Neppel, had produced more than $100,000 worth of rye whiskey (about $1.3 million in 2013 dollars) just before his place was raided. In another federal raid, this one on the farm of Adolph Lentz in July 1931, agents recovered a 500-gallon still and a 100-gallon still in a cornfield and 50 gallons of mash in barrels, but the feds were either too early or too late to catch the old farmer with any actual liquor.

It wasn’t greed, but hard times that drove the farmers to produce their illegal product. While in general the nation saw an economic boom in the 1920s, the farm sector was in bad shape for the entire decade, beginning in 1920 when the bottom began to fall out of the agricultural market. This was partly due to land speculation, and partly due to the return of farming to Europe after World War I, which meant there was a lot of product and little demand. When farmers couldn’t make their bank loans, taken out when the market was booming, they often became tenants of the farms they once owned. It was even worse in Iowa, where farmers carried twice as much farm mortgage debt than in any other state.

It got even worse following the collapse of the stock market in 1929, with total farm income falling from $12 billion in 1929 to $5 billion by 1932. During the two year period of 1931 to 1932, in one formally prosperous Iowa county 12.5 percent of the farms were sold at auction and 25 percent were foreclosed on, a scene mirrored throughout the state during that time, according to Remley J. Glass, writing in the July 1933 edition of Harper’s magazine.

“In the fall of 1932, a wagon load of oats would not pay for a pair of shoes; a truckload of hogs, which in other days would have paid all a tenant’s cash rent, then did not pay the interest on a thousand [dollar loan],” wrote Glass.

Added to these farmers’ troubles was a series of droughts beginning in the early 30s.

The spiraling problems facing farmers in the 1920s coincided with the federal ban on the manufacture and sale of alcohol for consumption with the enactment of the Volstead Act, which carried out the 18th Amendment. In Carroll County, farmers did what they had to do to keep what was theirs. If it meant breaking the law, then so be it. 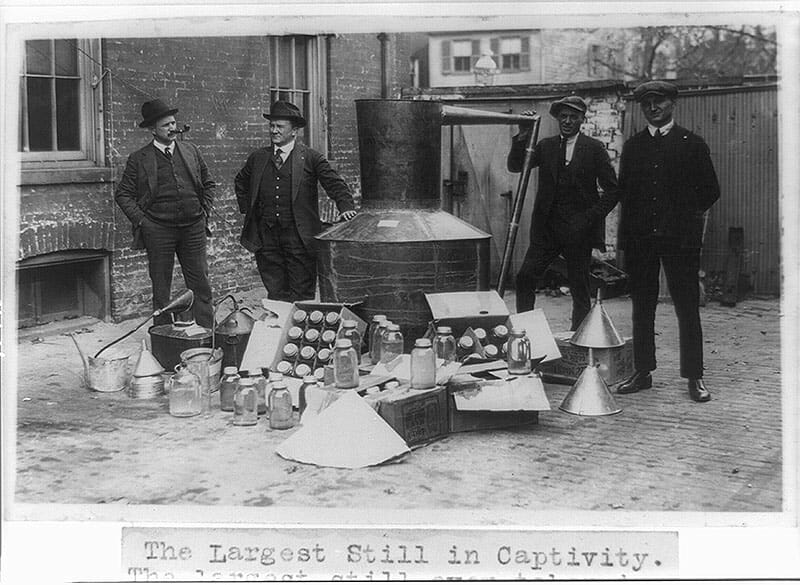 Agents of the IRS pose with what the caption calls 'the largest still in captivity' in a photo taken in 1922. Photo courtesy the Library of Congress.

During these years there was a decided change in the attitude of the normally conservative farmers toward “the financial and economic powers that be” in the face of the possibility of losing their way of life, wrote Glass. One can surmise that this extended towards the federal government and its prohibition on the manufacture and distribution of alcohol.

And this attitude trickled down into the courts. Raiding the stills was the easy part for the government agents, getting a jury to convict their neighbors was another story. According to an article in the Carroll Times from March 26, 1925, in one month two bootleggers in separate cases were found not guilty of liquor law violations by a jury of their peers, even though the evidence against the two farmers seemed overwhelming. The judge did allow the state authorities to destroy “the stills, hooch, etc.”

The article goes on to opine on prohibition in general: “All the time the taxpayers are being bled for the funds to keep this thing going on, and nothing comes of these cases that are tried here,” the reporter wrote.

What’s especially surprising about this negative attitude toward Prohibition was the fact that Iowa had banned booze four years before the federal government did.

The same newspaper declared “the state prohibition agents seem to be an expensive luxury for the taxpayers, sticking around for months and then when one of their cases comes to trial find they have no case.” The paper suggested fining the men for “running up costs” for “no reason.”

No to be outdone by its competitor, the Carroll Daily Herald let it be known how it felt about Prohibition, or more specifically the government agents who enforced the law, blaming them for the high cost of Templeton rye.

“Now some people want to know if [the state prohibition agents’] presence is the cause of the hooch being so high. Do they drink so much or do they teach the hooch-maker how to make it better so it costs us more?” the paper demanded to know.

The going price for a gallon of Templeton Rye was between $5.25 and $5.50, about $70 today, a steeper price than much of the product available at the time.

In the same opinion piece in the Daily Herald, the writer goes on to state that the rumor was that the prohibition agents were staying around the county because “they find better hootch in Carroll County, that is not so dangerous to take, than in other places.”

While in other areas of the state there was a lot of violence associated with bootlegging, including in Des Moines, where rival gangs killed each other over control of the racket, if the local newspapers are any indication there seemed to be less strife in the Templeton area than elsewhere.

It seemed on many occasions, it was the agents who caused more bloodshed than the bootleggers. In the winter of 1930 in the next county over from Templeton, two federal prohibition agents were suspended after shooting a nurse who was unlucky enough to get into a fender bender with their car. The men claimed the woman failed to stop and they merely popped off a warning shot which somehow managed to go through the car and graze the woman’s scalp. 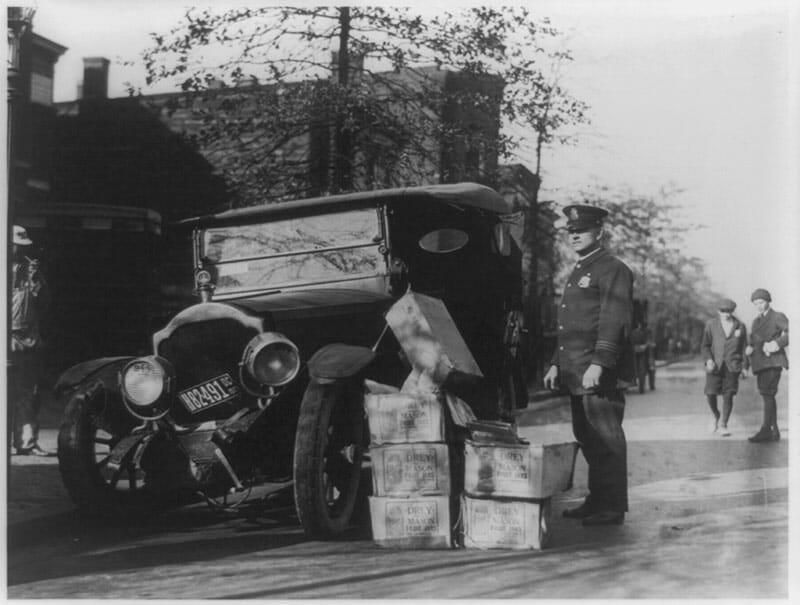 A policeman stands next to a wrecked car and cases of moonshine, in a photo taken in 1922. Photo courtesy the Library of Congress.

By the early ’30s Templeton Rye had reached the status of a brand of sorts (so much so that it was referred to by name in the press) and as Prohibition’s end neared the Carroll Daily Herald threw its support behind the product that brought “fame and fortune” to the community through “building confidence in its illegal liquor.”

The editors hoped that even after the repeal of the 18th amendment people “who crave a larger and quicker wallop” and wanted a cheaper drink then “heavily taxed government liquor” would stay true to Templeton Rye, but it was not to be. On Dec. 5, 1933 the ban on booze was completely lifted with the ratification of the 21st Amendment. It meant the good times could roll once more, but for the farmers in Iowa and the rest of the country, the hard times would last for the rest of the 1930s.

Templeton Rye would fade from America’s consciousness and disappear from its bar carts, but in Templeton and the rest of Carroll County, it would continue to be produced for home consumption for many years.

Want a taste of the past? You’re in luck. Today, thanks to two descendants of some of those hooch-producing farmers of Templeton, the product has been reborn and is legal. Let the good times roll.

Hi there, I’m doing a project on the effects of hunger and crime. I was wondering if you had the sources for your article available?