Is the modern farmer a robot? 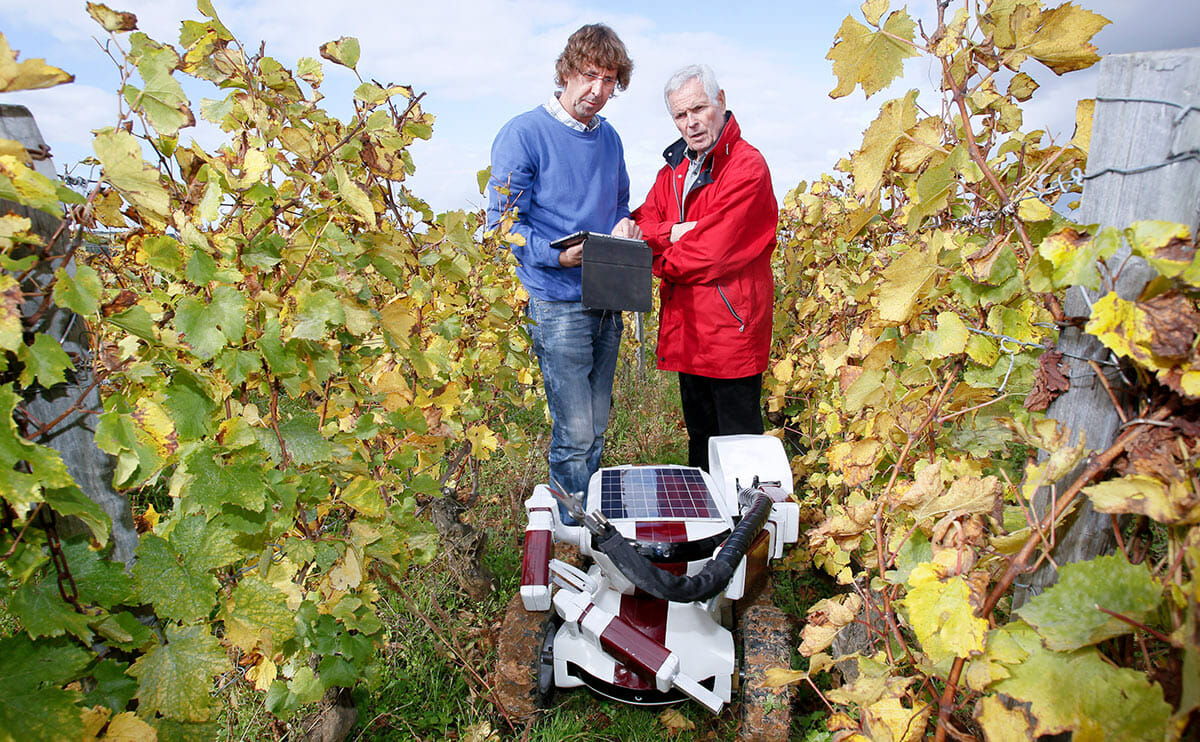 Every day brings news of some new ag robot, designed to increase efficiency and lighten the farmer’s load. Just in the past few months, we’ve done stories on the Lettuce Bot (aka Roomba for weeds), drones that herd cattle and spray pesticides, and a self-driving tractor. Some worry — as with many professions — that farm machines will replace humans altogether. Others are happy to embrace automation, especially when it helps boost income and reduce stress. But whether you love robots, fear them, or just can’t look away, they are upending agriculture as we know it. Here are five compelling farm bots, in varying stages of completion.

A French inventor named Christophe Millot has created a self-propelled robot for pruning vines, removing young shoots, and monitoring soil and vine health. Millot named his bot Wall-Ye, putting it one step ahead of its American cousin, the clunky-sounding Intelligent Robotic Vineyard Pruner. Wall-Ye is kitted out with a tight security system — it will only start within pre-designated vineyards, and the hard drive self-destructs in dangerous situations. Millot told the Agence France-Presse his robot would likely displace vineyard workers, but would create jobs “for someone who has gone to school and who will build, maintain and improve the robots.” Wall-Ye will cost roughly $32,000.

In the nursery industry, much time and labor is spent on one menial task — moving potted plants around. Boston-based Harvest Automation has a solution, in the form of orange-and-gray robots with rolling tires, gripper arms, and trays. First you input plant locations on a touchscreen grid. Then the robot uses sensors to pick up the potted plants, carry them, and place them where they need to go. The company’s website makes it clear who this robot is designed to replace: “The agriculture industry is facing unprecedented labor volatility with tighter federal regulations on migrant workers, and a shrinking pool of available workers.”

Australian researchers have designed a “Robotic Rover,” designed to keep cows in line like a cattle dog. It’s still in the planning phase, but Camden cows have responded well to the prototype. Rover uses 2D and 3D sensors, as well as global positioning technology, to herd cows where they need to go. According to The Land, one of the Robotic Rover’s most interesting features is its pace — it’s designed to move at cow-speed, rather than forcing cows to rush around. But you probably won’t own one of these anytime soon: The price tag is a cool $1 million Australian dollars.

Harvard engineers have unveiled a teeny-tiny bee bot, allegedly the smallest flying robot ever made. Dubbed RoboBee, the goals of this little guy are broad — everything from autonomous pollination to post-disaster search and rescue. In the UK, researchers are working on an autonomous bee with a more structured goal. They want to map the honeybee brain so they can completely synthesize bee behavior — and keep the world’s food chain intact.

The Rosphere, developed by a team at the Universidad Politécnica de Madrid, looks and functions just like a hamster ball, rolling over your croplands without the use of wheels or legs. Inside the Rosphere, a pendulum rotates on an axle to make it roll and steer itself, like a hamster running up the sides of a ball. It’s perfect for navigating crops without harming them, and rolling over uneven terrain. Using GPS and wi-fi technology, the device aims to collect information about soil composition, temperature, moisture and plant health, then broadcast it back to the farmer. And if the autonomous little robot somehow gets trapped, you can take over the controls and steer it remotely.